Good morning folks, Thanks for stopping by.

It's Monday today. The beginning of a new exciting week, where anything can happen!

I have another card for you. I received quite a lot (12) last week. One of them from the Ukraine from Tatiana. 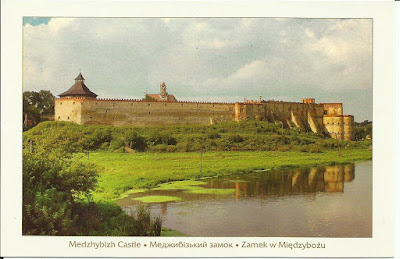 It is an image of Medzhybizh Castle. Tatiana writes on the back that she is an artist and has a website: www.tatianapetenko.kiev.ua
I had a look and she is a gifted artist in my opinion.

She sent this card in an envelope, with two more cards of the same series of castles. On the back of these cards was a map of the Ukraine. I always find that helpful as my Eastern European geography is 'pants'. 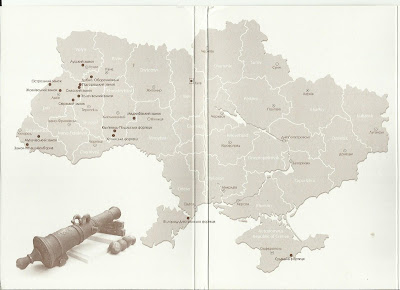 I never knew/realised that the Crimea is in the Ukraine...

This is the envelope all this came in: 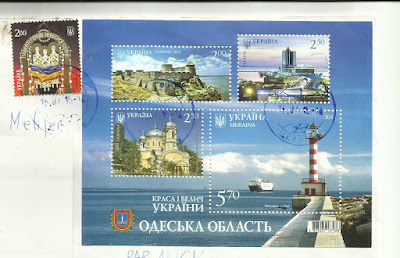 Beautiful isn't it! The large stamp set is about Odessa and its region. I've not been able to find out what the individual stamps represent, only the light house. It is the Illichyovsk Lighthouse on the Black Sea.

The small stamp is interesting. It commemorates 'The heavenly Hundred'.I had to look this up. Wikipedia says this:
This is the list of people killed during Euromaidan events taking place in the fall and winter of 2013–2014. The list contains only confirmed deaths of Euromaidan participants, Ukrainian policemen and other killed by Euromaidan participants. There are currently near 130 identified deaths; most of them were civilian protesters. 18 police officers were also killed during the clashes.[1]
Ukrainian sources often refer to the deaths protesters as the "Heavenly Hundred". On 21 February 2014, Verkhovna Rada recognized the perished protesters of Euromaidan as victims.[2] On 21 November 2014 by Petro Poroshenko's decree the perished Ukrainian protesters of Euromaidan were posthumously awarded the Order of the Heavenly Hundred Heroestitle.[3] Three non-Ukrainian citizens killed in the Euromaidan events were each posthumously awarded the title Knight of the Order of the Heaven's Hundred Heroes.[4] 2015 "the Day of the Heavenly Hundred Heroes" was celebrated on 20 February to commemorate the deaths. 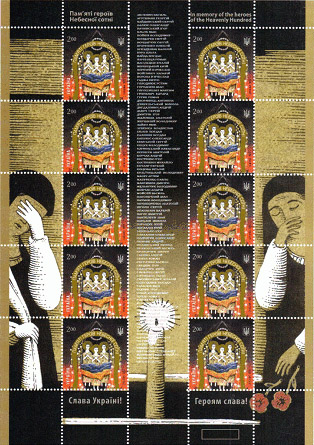 This is the whole sheet of stamps. I assume the list in the middle are the hundred names of the victims.

Again, I've learnt something. Postcrossing is very educational, no wonder homeschooling families often do it.

Have a good Monday,