A Postcard a Day-23 August 2015 a partially submerged church

As it is Sunday today, I will show you a postcard of a church. This one was not sent to me, but it is my own as I bought it during my visit to this unusual church. It's St Matthew's church in the village of Normanton in Rutland, UK. 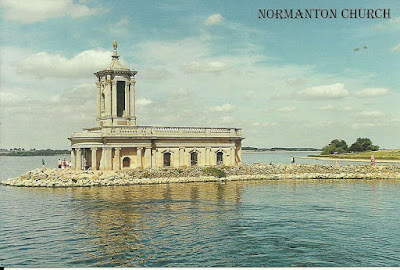 St Matthew's Church is most unusual as it located on a tiny peninsular of rocks on the edge of Rutland Water - a major reservoir in the tiny county of Rutland. Parts of the church are actually below the waterline which were filled with rock and rubble when the lake was built in order to save the building. It has been a museum for a while. The skeleton of an Anglo Saxon man as well as dinosaur fossils were on show. Now it is being used as a wedding venue. 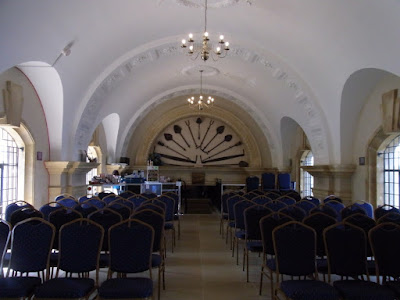 During the early 1970's it became obvious that a new reservoir was needed to provide drinking water for the expanding population of South East Britain. Surveyors and government finally decided that best location would be the Gwash valley in the County of Rutland. Unfortunately this meant that a substantial part of the parish of Empingham would be submerged underwater. Both the villages of Middle Hambleton and Nether Hambleton were cleared. As the valley was flooded it became obvious that the high-water level would partially submerge St Matthews Church, a private chapel that had once been part of the Normanton Estate. The church had narrowly avoided being demolished as part of the valley clearance but now faced the prospect of destruction again as the rising waters would slowly erode its foundations and lower walls. A trust was quickly formed to save it for the future. Various proposals were evaluated but in the end it was decided to fill the lower level with a mixture of concrete and stone to secure its base. 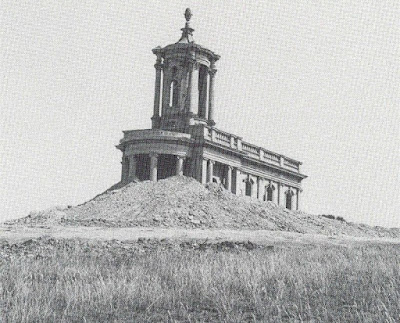 This would reach as high as the window ledges and be approximately 60 cm above the high-water mark. As the church would become a mini-island a causeway was constructed from a nearby slope. This was then extended to become a bank of clay that completely surrounded the building. Once in place a defensive layer of boulders were positioned to provide a breakwater. 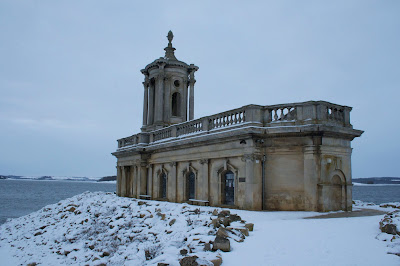 The project was successful and has created an unusual landmark that has become a fascinating destination for anyone interested in the more curious aspects of the British countryside. When the reservoir is full St. Matthews appears to float serenely on the surface of the lake and when the water is lower it confuses the eye as it becomes clear that half of the church appears to have sunk into the ground.

That's it from me today,
Have a good Sunday,
Be blessed,
Lisca