Today is Sunday and I want to show you a church on a postcard I received recently. It is the Church of the Birth of Christ in Krasnodar, Russia. 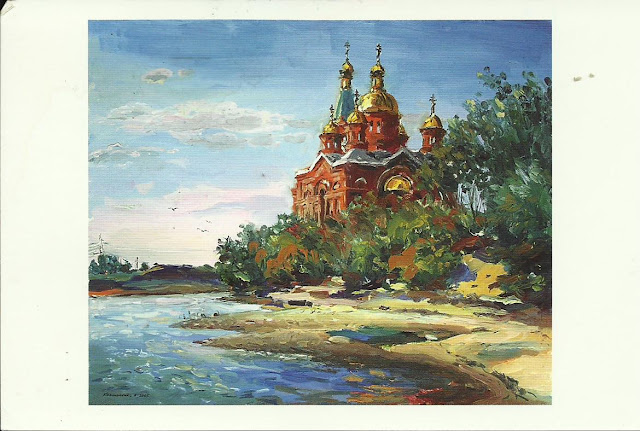 It was painted by Alexander Kalinitchenko in 2005. It was sent to me by Vladimir who actually lives in Krasnodar.

These are the stamps: 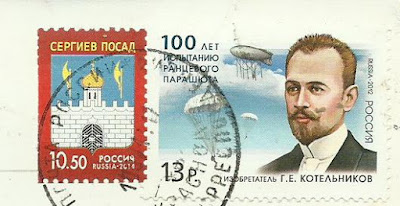 The stamp on the right is celebrating the 100th
Anniversary of Trial of Knapsack Parachute by G.E.
Kotelnikov. Gleb Kotelnikov was a theatre actor turned who turned inventor after witnessing the death of pilot Leo Matsievich during an air show in St Petersburg. He dedicated his life to preventing unnecessary deaths of air pilots. The trial of the parachute went very well but the Russian government refused to put the new invention into production as the military were afraid that pilots would abandon their planes at the first sign of danger and not pilot their expensive vehicles to safety. What a great story.

The small stamp on the left shows the coat of arms of the city of Sergiev Posad.

As it is the beginning of the month, I'd like to tell you what I have been reading. My husband and I each have a Kindle (an electronic reading device). So I can read as many books as I like as it is a cheap way of buying English language books.

This past month I've been enjoying reading a trilogy in the 'fantasy' genre. I've nearly finished the third book.


The first one is called Assassin's Apprentice by Robin Hobb. 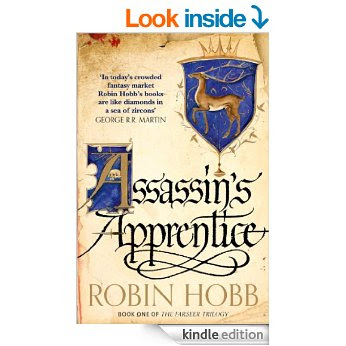 In a faraway land where members of the royal family are named for the virtues they embody, one young boy will become a walking enigma.

Born on the wrong side of the sheets, Fitz, son of Chivalry Farseer, is a royal bastard, cast out into the world, friendless and lonely. Only his magical link with animals - the old art known as the Wit - gives him solace and companionship. But the Wit, if used too often, is a perilous magic, and one abhorred by the nobility.

So when Fitz is finally adopted into the royal household, he must give up his old ways and embrace a new life of weaponry, scribing, courtly manners; and how to kill a man secretly, as he trains to become a royal assassin. 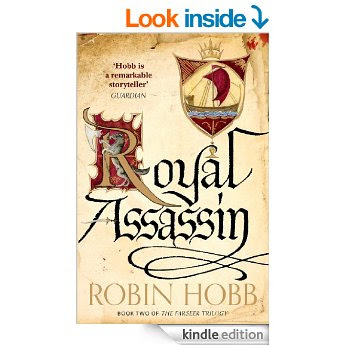 The second volume in Robin Hobb’s internationally bestselling Farseer Trilogy.
Honesty is the bedrock for any relationship. But how can Fitz – royal bastard, trainee assassin, holder of secrets crucial to the security of the kingdom – bare his soul to his beloved Molly?
Danger lies all around him – from the raiders savaging the coastal towns, and from within the court. The king has been struck down by a mystery illness and his eldest son, Verity, is bound up in the defence of the realm. 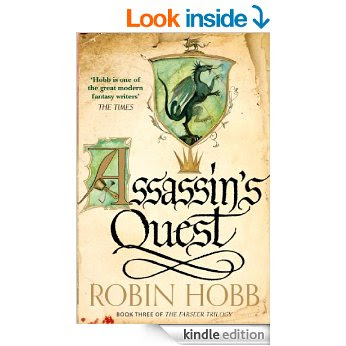 King Shrewd is dead at the hands of his son Regal. As is Fitz—or so his enemies and friends believe. But with the help of his allies and his beast magic, he emerges from the grave, deeply scarred in body and soul. The kingdom also teeters toward ruin: Regal has plundered and abandoned the capital, while the rightful heir, Prince Verity, is lost to his mad quest—perhaps to death. Only Verity’s return—or the heir his princess carries—can save the Six Duchies.

But Fitz will not wait. Driven by loss and bitter memories, he undertakes a quest: to kill Regal. The journey casts him into deep waters, as he discovers wild currents of magic within him—currents that will either drown him or make him something more than he was.

(The descriptions and images I have copied from the internet.I don't think the 'look inside' link works) I'm really enjoying this series as it has a bit of everything. A lot of adventure, a little bit of magic, but  not too much as to make it unbelievable. And there is romance too.

I hope I didn't bore you too much with the book....

Have a lovely weekend,

Email ThisBlogThis!Share to TwitterShare to FacebookShare to Pinterest
Labels: books