Hi everybody!
Here I am again with 'a postcard a day'.

Yesterday I wrote that I am participating in an envelope exchange. I have been given five addresses to send a 'prettied up' envelope to. You saw the ones that I doodled/zentangled and they have been posted yesterday morning. I have now received my first envelope in the exchange: 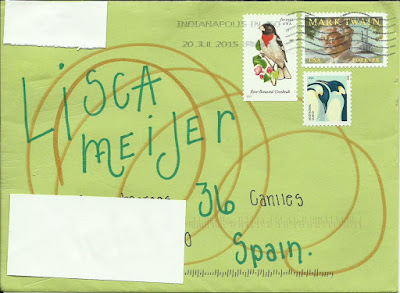 It was sent by Marti from the USA. Inside the envelope was a short letter and a beautiful black and white postcard of a native American. What a beauty! 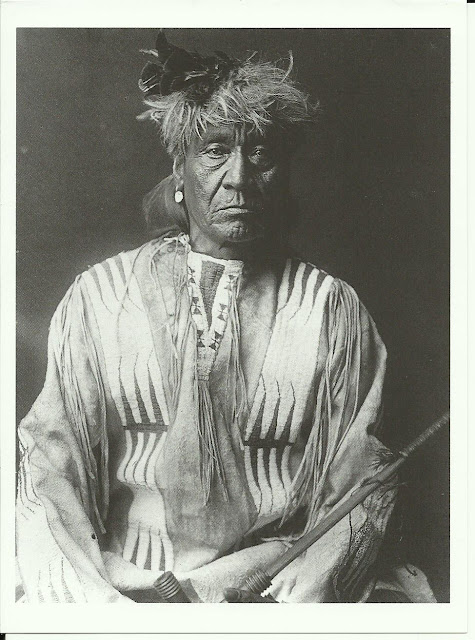 I assume it's a man. He looks quite fearsome. I love the woven panels on his top.
Marti also put some nice stamps on the envelope: 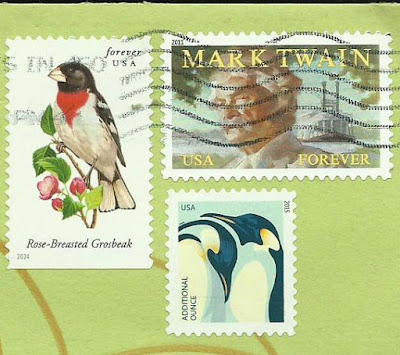 The bird is a rose-breasted grosbeak, a typical American bird. I've just looked that up in Wikipedia:

The rose-breasted grosbeak is a large insect-eating songbird in the cardinal family. It is primarily a foliage gleaner. It breeds in cool-temperate North America, migrating to tropical America in winter. Wikipedia

I knew that Mark Twain (on the other stamp) was an author. To my shame I must admit that i have never read any of his books.
Here is some info about him:
Samuel Langhorne Clemens, better known by his pen name Mark Twain, was an American author and humorist. He wrote The Adventures of Tom Sawyer and its sequel, Adventures of Huckleberry Finn, the latter often called "The Great American Novel". Wikipedia

That's all for today. I'll be back tomorrow and I will hopefully put a smile on your face as I'm going to link with Friday Smile.