Great to see you are visiting again. I have an interesting card to show you today. I like it very  much. It came all the way from Hongkong. 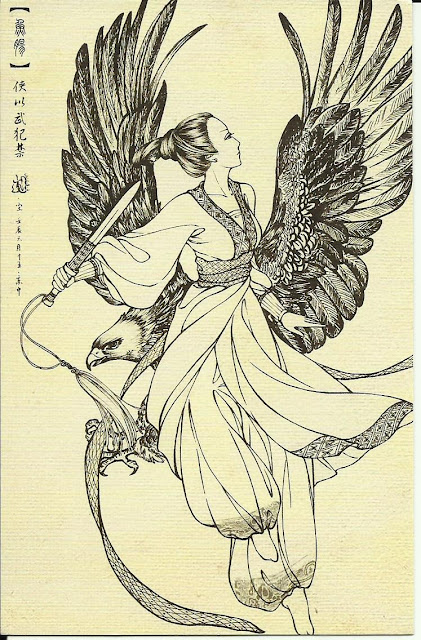 There is no explanation as to what/who it is and who the artist is. It looks like a mythical figure.

The card is from www.mo-card.com . I went to that site but it is no longer in use....

The girl that sent it to me is Shela, who is a university student majoring in Chinese. She loves reading and was reading Paulo Coelho's Alchemist when she wrote the card.

The stamp is an air mail postage stamp. 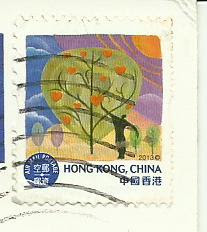 I'm not a philatelist, so I have no idea what the picture is about. I see a man picking hearts from (or putting hearts in) a tree. (Ooh, that is food for psychologists... what do you see: picking or putting?)

Finally a stamp I bought today at the post office: 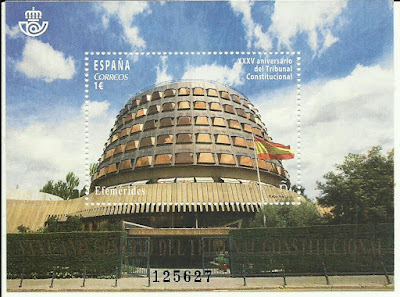 Only the middle bit is the actual stamp but they are sold with the surround. The whole thing is quite big and takes up half the envelope!

The building is that of the Spanish Constitutional Tribunal. No, I'd never heard of it either... but I looked it up! I'll print the wikipedia result below.

That's it for today. Tomorrow is another day.
CU then,
Lisca

The Constitutional Court of Spain (Spanish: Tribunal Constitucional de España)
is the highest body with the power to determine the constitutionality of acts and statutes of the Spanish Government. It is defined in Part IX (i.e. sections 159 through 165) of the Constitution of Spain, and further governed by Organic Laws 2/1979 (aka Law of the Constitutional Court of October 3, 1979), 8/1984, 4/1985, 6/1988, 7/1999 and 1/2000. The court is the "supreme interpreter" of the Constitution, but since the court is not a part of the Spanish Judiciary, the Supreme Court is the highest court for all judicial matters.
Notable decisions
In 2005, the court ruled that the Spanish judicial system could handle cases concerning crimes against humanity, such as genocide, regardless of whether Spanish citizens were involved or directly affected. In this instance, it reversed the decision made by the Supreme Court in the same case, which held that such cases could be brought before Spanish courts only if a Spanish victim was involved