Today I want to show you a typical Dutch card with national costumes. I received it last month from Berlin (short for Berlinda). She lives in the south west part of the Netherlands called Zeeland. (Here in the dark blue colour).

(I’m pretty sure New Zealand was named after this province). 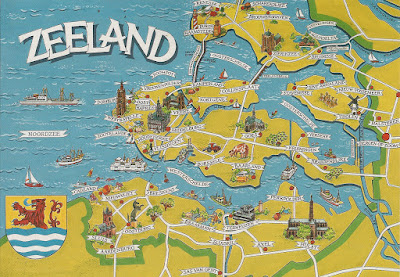 Zeeland has a large variety of national costumes as the province was made up out of islands.
(The above card I got off the internet to show you what Zeeland looks like.)

Nowadays there are dykes everywhere connecting all the islands. The dyke project (called Delta plan) was started after Zeeland flooded in 1953. It is now complete and is a feat of engineering. 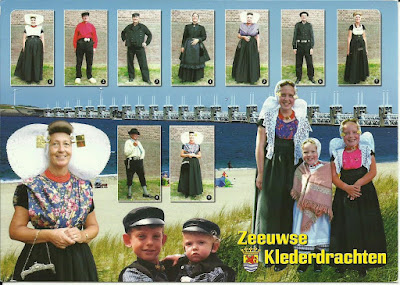 This is Berlin's card. I hope you can see the pictures of the costumes as the pictures are tiny. They are numbered from left to right: 1 and 2 are Arnemuiden, 3. Axel, 4. Cadzand, 5. Nieuw en St Joostland, 6 & 7 Walcheren, 8 & 9.Protestant Zuid Beveland.

The headdress is made of ‘broderie anglaise' and is starched and folded and then pinned over a little cap. The front of the hair get combed over to finish it off.

Here is a short video of a woman (from Arnemuiden I believe) folding her headdress. It is in Dutch but the pictures are self explanatory. The ‘rag’ on the table is a headdress as it comes out of the wash, unstarched. 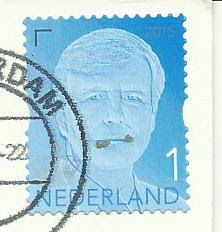 That is my contribution for today,
CU tomorrow,
Lisca
Posted by Lisca at 00:15