Have you all had a good weekend? I hope so. We have been entertaining our daughter and grandson, who have come over from England for 5 days. They have specifically come over to see the lunar eclipse and the ‘blood’ moon through our telescope. The weather forecast was not good, so they (my husband too) have travelled to a mountain top which is higher than 2000m hoping that they will be above the clouds. They haven’t come back as I write this. So I’ll let you know….

Now for my card: it’s Monday so I have a map card to show you. 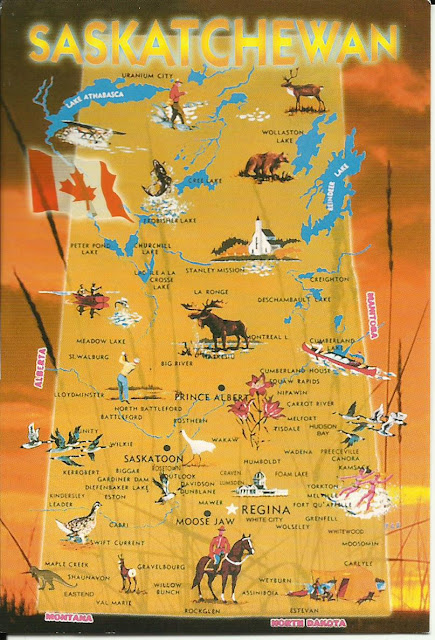 It is the map of the Canadian province of Saskatchewan, sent to me by Krista.
I don’t know much about Saskatchewan other than that it is land locked and sits in the ‘middle’ of Canada.
I did google it though and I found out that their national flower is the lily (Lilium Philadelphicum) and that the province had been inhabited for thousands of years by various indigenous groups (Nowadays called ‘first nations’).
It was first explored by Europeans in 1690 and settled in 1774. It has prairie land in the south and rocks, forests and lakes in the north. The capital is Regina but the largest city is Saskatoon. 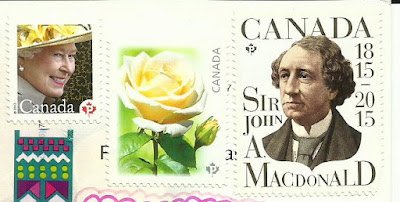 Now for the stamps:
The small stamp on the left shows HM Queen Elizabeth, as she still officially reigns over Canada.(Please someone correct me if I’m wrong in this). The large stamp on the right celebrates 200 years since the birth of Sir John A Macdonald. He was the first president of Canada and originally came from Scotland.

Krista (who sent me the card back in March) tells me she is a crafter too and she has decorated the card with washi tapes, a cup cake and two turtle stickers (I love turtles). So thank you Krista. I like it very much.

That's it from me today. See you tomorrow when I link up with 'T for Tuesday'.