Hello lovely peeps, we're back in Spain! It's so good to be home!

I will show you some photographs of our stay in Italy a bit further down the line but first off is a beautiful postcard from Christel, a Facebook friend. 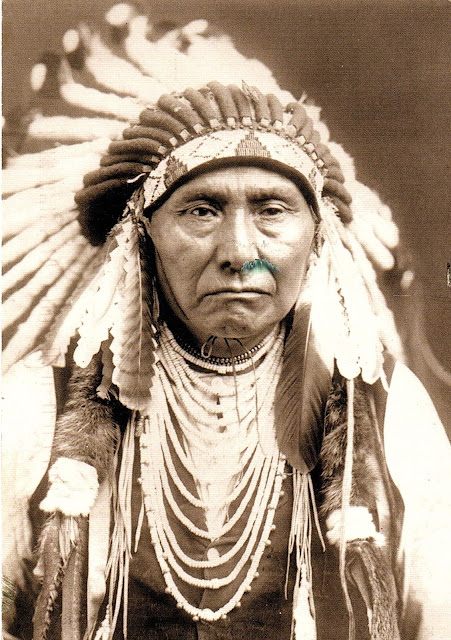 As you can read here, it is a photo of Chief Joseph.

Christel has stuck some info next to the stamp. It reads: "Fiery eruptions are common at Kilauea, a volcano in the southeastern edge of the Big Island of Hawaii. Kilauea has had 55 eruptive episodes since 1983. It typically produces more than 10 million cubic feet of lava every day."
The bell on the last stamp I assume is the Liberty Bell.

My next card comes from the Czech Republic. It features Tábor.
Tábor is situated in the Czech Republic, in South Bohemian Region, 100 kilometers away from the capital city Prague.
On the photo you can see Zizka Square and the town hall. 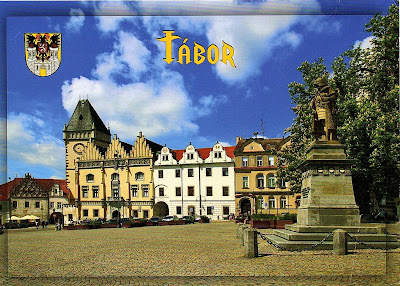 The statue is that of Jan Zizka 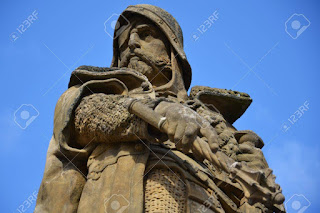 Overlooking the main square in Tabor, the monument gives you a powerful impression of the leadership qualities Jan Zizka had in the leadership of the Hussite forces engaged in a long period of confrontation and battles with the forces of the Pope.His military strategy was far ahead of his time particularly in use of wagons as prototype tanks.Around the base of the monument are plaques showing some of the famous victories in which he was intimately involved. A man of great religious commitment and a man dedicated to the defence of what he saw was the national interest of his time.

Czech Republic postage stamp E denomination Jan Kaplický (Architect) commemoration issued 4th April 2018 Themethe original Jan Kaplický’s design of one of the proposed Czech National Library versions.Jan Kaplický (18 April 1937–14 January 2009) was a Czech architect and a visionary of modern architecture, living in the United Kingdom after his emigration in 1968.He set up the architectural studio Future Systems with David Nixon. He won the Royal Institute of British Architects (RIBA) Stirling Prize, considered the most prestigious architecture award in the UK, for the new media centre at Lord’s Cricket Ground.

Now let me tell you about our trip to Italy. We went to see my son and his family. The little town is called Guardiagrele, and can be found in Abruzzo, in the middle of Italy near the Adriatic coast. We travelled by bus to Alicante in Spain (5 hours), spent the night at a hotel and got our flight out in the morning. In Rome, we got on a bus to Chieti, on the other side of Italy. It was mostly motorway so it only took 3 and a half hours. My son came to pick us up with my 4 yr old grandson. I hadn't seen him since he was a baby, so he doesn't know my really and was very shy.

Sunday is market day in Guardiagrele, so we went to get some fruit and veggies. Here is hubby with my son and his wife. 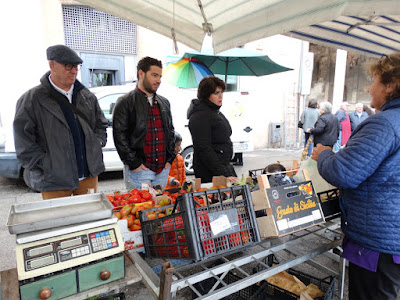 The weather was really awful. It was cold. Much colder than I expected and I didn't have warm enough clothes. And it rained every day. 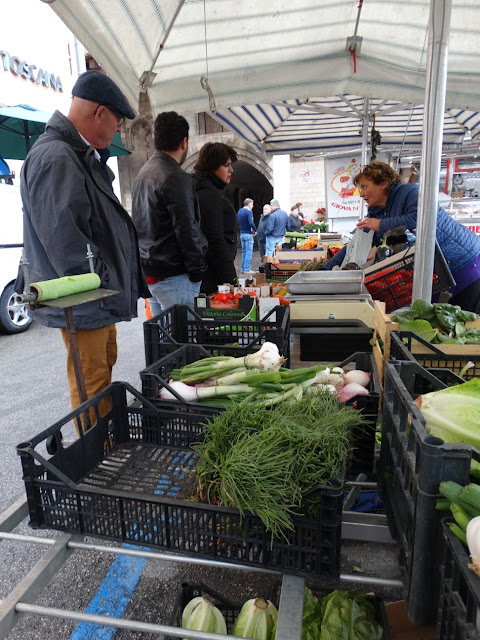 My d-i-l stopped to buy some flowers under the eves of the church (as it was raining). You can see my little grandson in his orange jacket. 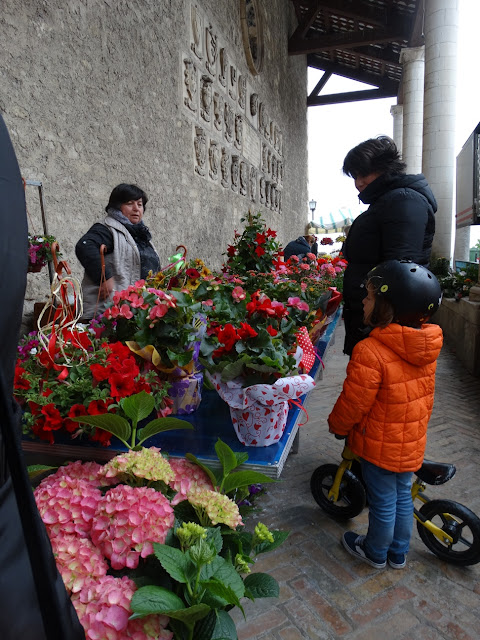 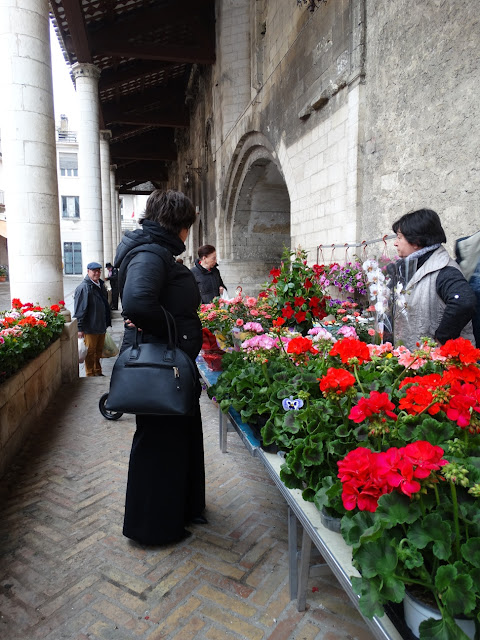 It started to rain even harder so we just had to wait and take shelter in the side porch of the church: 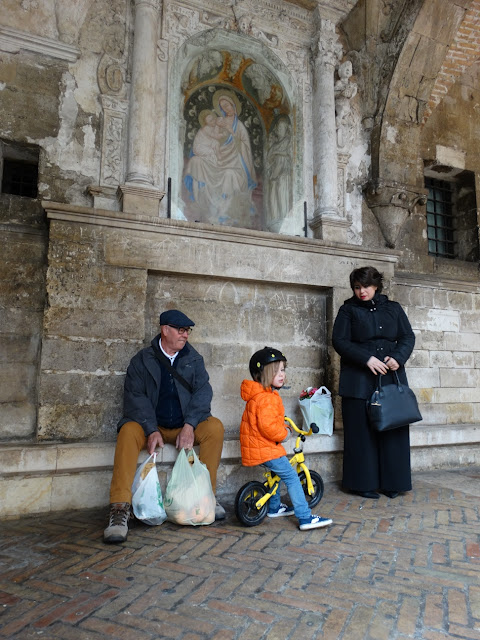 The paintings on the side wall are very old and they are protected by glass. 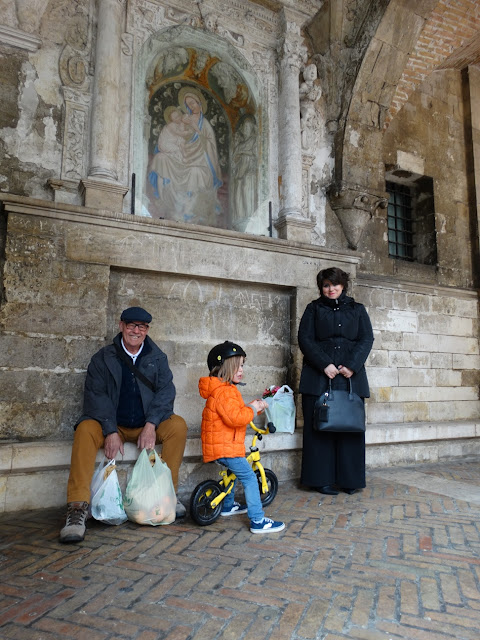 Here you can see the length of the porch. It runs along the side of the church. 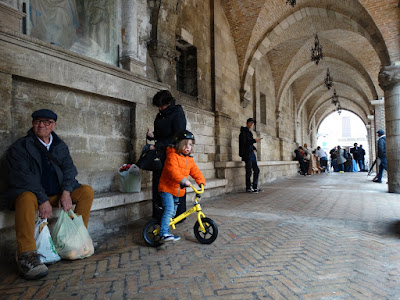 The vaults are beautiful. 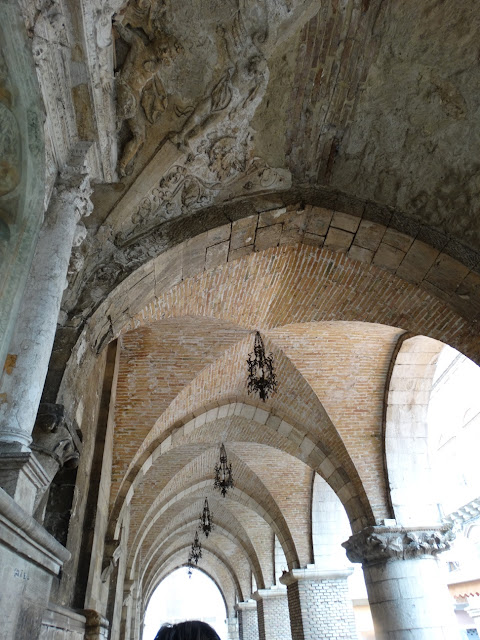 A close up of the wrought iron lamps, made by the local artisans. 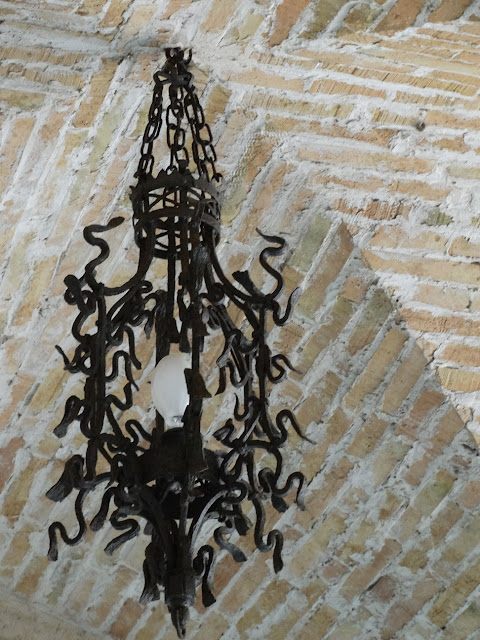 This is where we were, behind those tables and chairs. 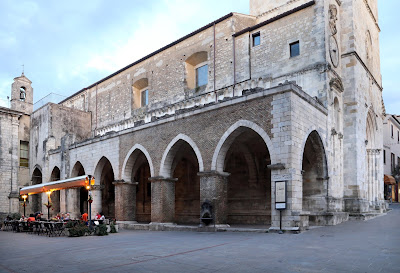 Here is a photo of the church from the front. 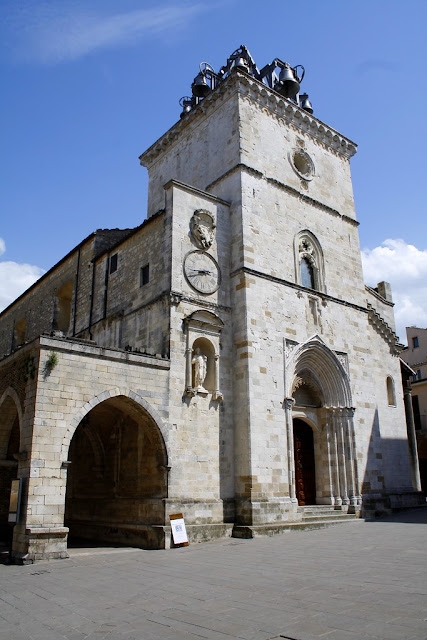 By chance I found this old image . By the looks of it, it used to have a belfry. 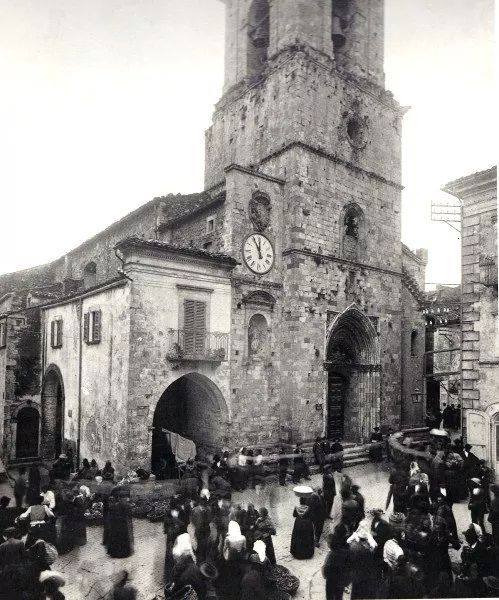 As it was market day, the other shops were open too. My son needed to buy some wine and to the wineshop we went. This section of the shop sells teas and coffees, also coffee pads loose. 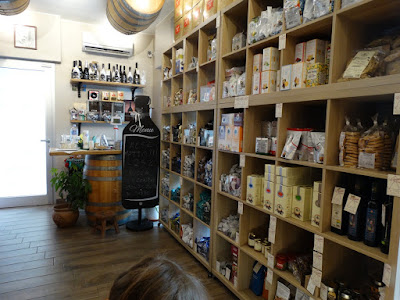 This side had lots of wines. In the foreground are two gift articles with an alcoholic beverage in it. I admit, I forgot to ask what was in it. 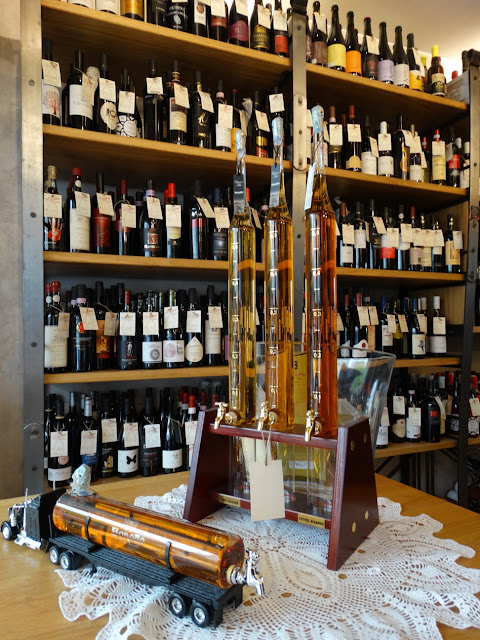 I think these photos qualify my for Elisabeth and Bluebeard's T-Party, where we post a blog with a beverage in it. 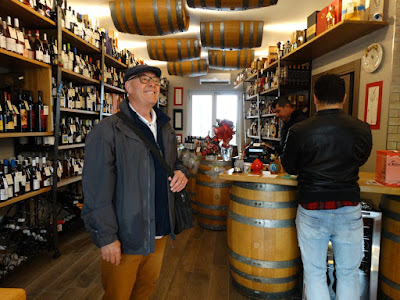 Hubby contemplating the ceiling, where barrels hide the lighting. Very clever. The local wine is excellent and cheap. My son buys a 5 litre box of rosé. 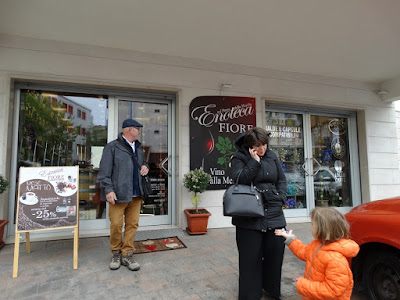 Then it was time for a coffee and we wanted to buy some pastries too. It was Mother's Day that Sunday, so all the pastries were gone. Only dunking biscuits and Mother's Day cakes.(And we hadn't ordered in advance) 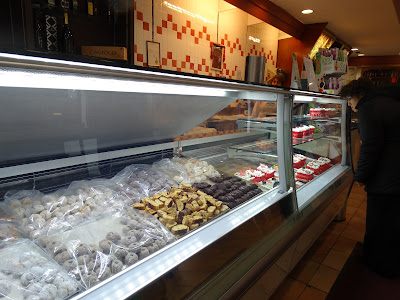 So we went somewhere else. One of my son's friends have this pastry place. Her name is Maria and she is here putting small pastries on a tray. 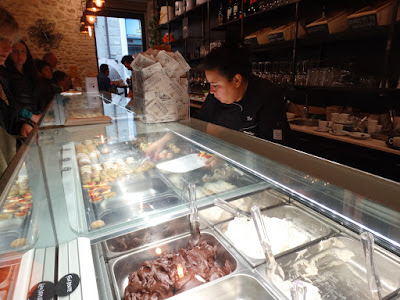 They also make ice cream, which looks lovely, but it was just too cold to contemplate eating that! 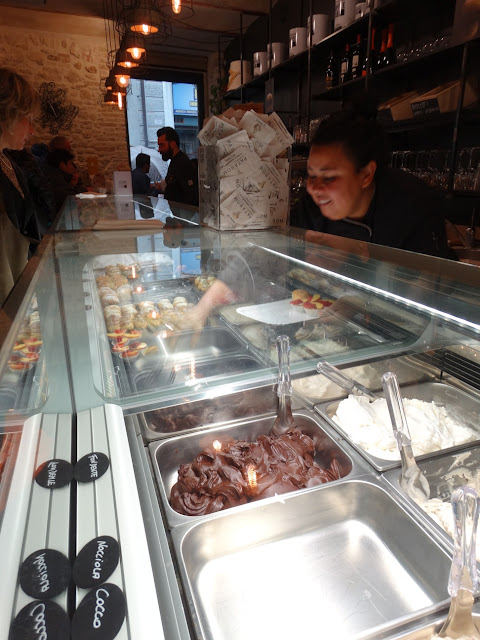 More ice cream. I shiver as I look at it. 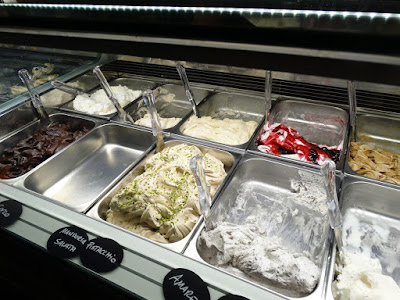 And a glimpse into the kitchen to see the chef at work. 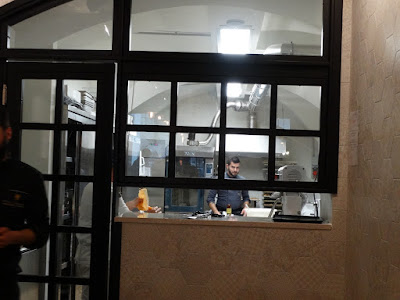 I hope you enjoyed the first Italy photos of our stay. There will be more next time and also in my Friday blog.

Wishing you all a happy T-Day,
Take care,
Lisca