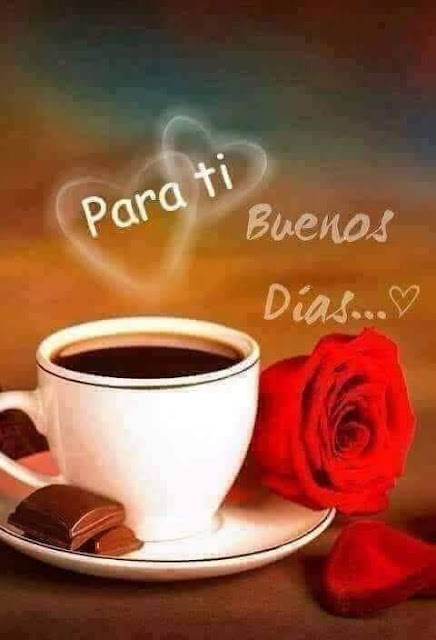 Good morning lovely ladies,
Here we are again to join the T-Party organized by Elizabeth and Bluebeard. I am starting this blog with a strong cup of coffee, so that is my entry to the T-Party.

I'm going to show you two more postcards. The first one comes from Australia and features the Super Pit Gold Mine in Kalgoorlie. What a huge mine! I bet it is visible from space. I'd like to know what they will do with the mine once it is finished. In other countries they flood it so a lake is created, but I'm not sure this is in a part of
Australia where there is water. I have been told that they are mining at a depth of 700 m and they will keep going until they reach 900 m. 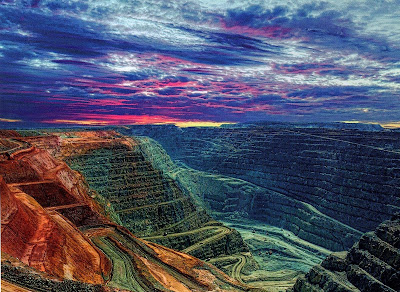 The second card comes from Germany. I really like this one. It is a black and white photo of a scene from the film Wilder Urlaub (1943). I couldn't find much about the film (although I do read German). This is what I found about the plot:
A young soldier in an army camp near a small Swiss village gets into an argument with his sergeant, which winds up in a fight. The soldier, believing he has killed the sergeant, flees to Zurich, determined to disguise himself and cross the border into France. However, things don't work out quite as he had planned. 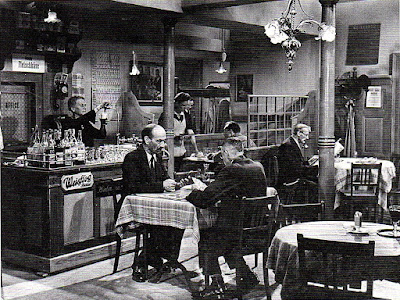 The stamps are very nice too. I especially like the one on the right because it is about the Bauhaus art style and I like that. 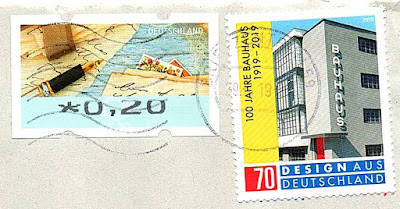 There is a bar/pub in Rotterdam built in that style: 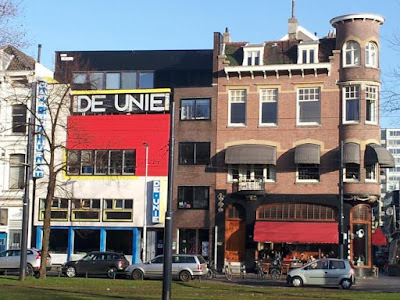 I remember it well from my student days. This is what it looked like in 1924: 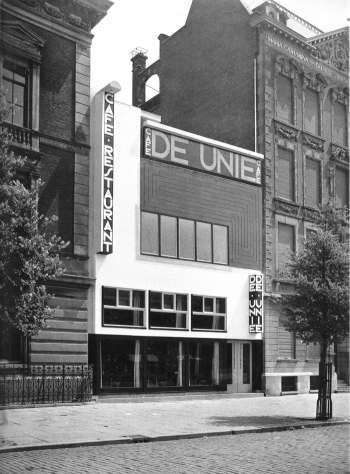 Well, my succulent has just had another baby! The old flower has died and another one popped up and all of a sudden I had another flower! 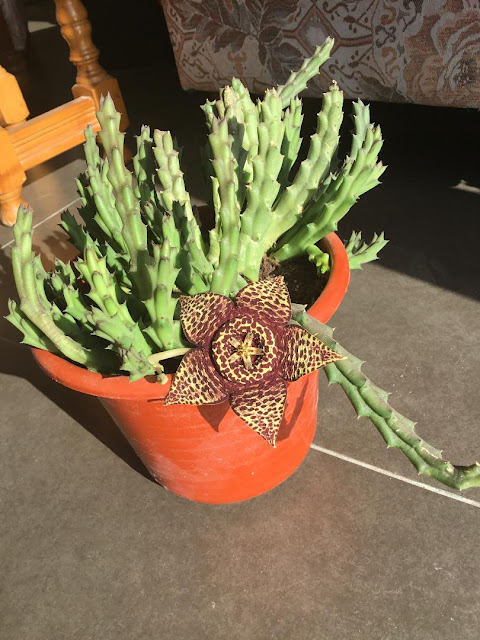 And there is another bud growing. (But you can't see it in the photo) 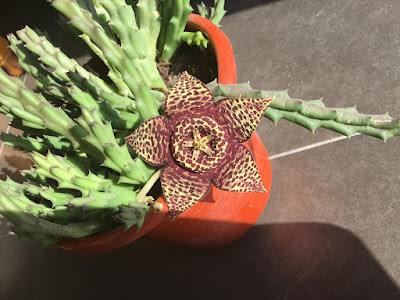 Sunday we went to a different church as we had visitors. This church has many foreign worshippers and there is an English translator. As it happens it was Mother's Day in Spain and the men had cooked a huge paella and invited the whole congregation to the meal. They had laid the table beautifully: 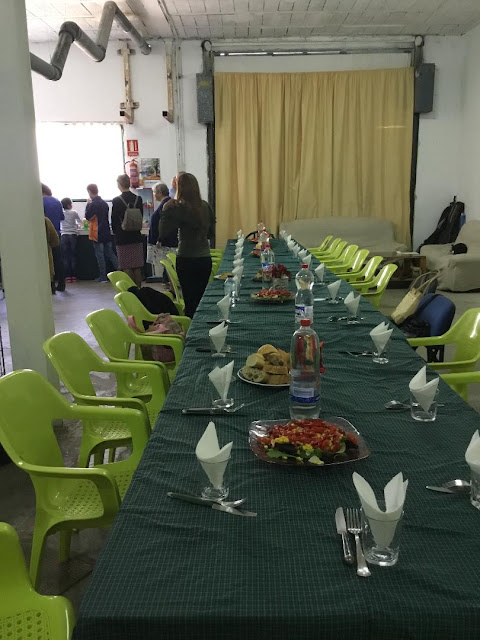 And they served everyone. It was delicious! 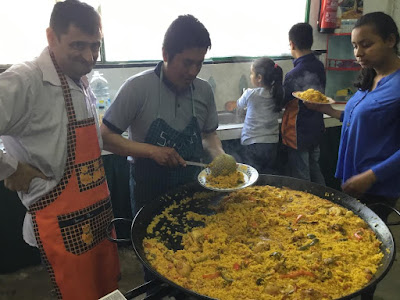 Hubby has been working hard as usual. We have had the sunshade put up and the poor chap who came to install it, had to contend with hubby's scaffolding, as hubby needed to repair a crack and paint it. Yes, he was wearing a harnas but I am glad I didn't have to watch him do it. Brrr! 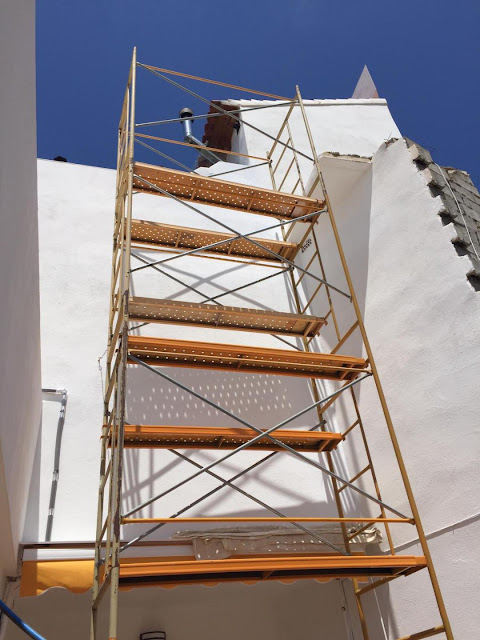 On Saturday evening, we walked past the park behind our house and heard music. There were two choirs all dressed in traditional dress, singing. 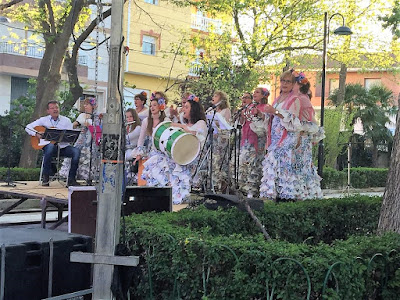 These ladies were from the second choir and they are local because the lady on the left goes to the gym with me. I love to see ladies dressed like that. 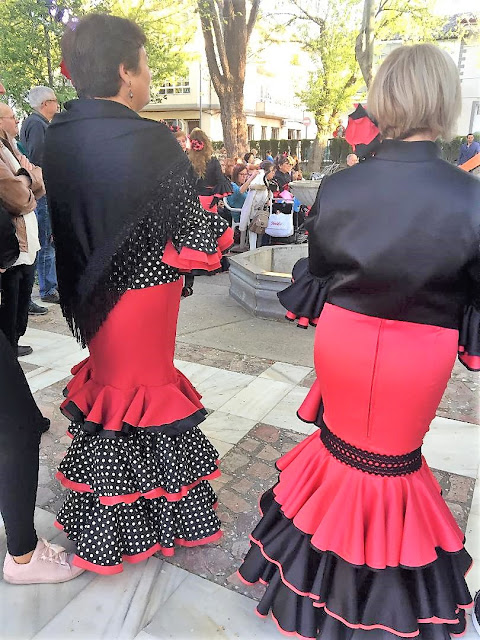 That is it from me. We are going on holiday on Thursday (to Italy to see my son and fam) so I am warning that I can't do much from my tablet. I will try to upload a few postcards onto Blogger in advance, and then for two weeks you will have to contend with a meagre blog post from me.