A Postcard A Day - Tuesday 2 April 2019 - T for Bakewell pudding, The Old Woman and the copper pot 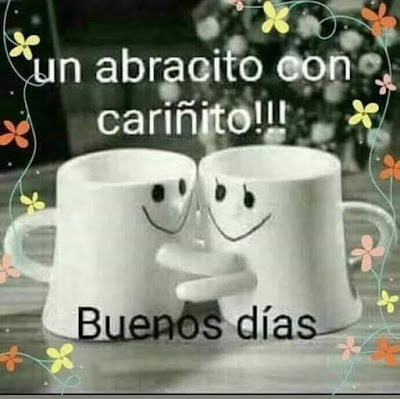 Good morning all! The above picture says: A hug with love!
Today is the first T-party in April. I hope you will join us at Elizabeth and Bluebeard's with a blogpost that has a beverage in it.

My first postcard today comes from the UK. From a small town called Bakewell.

Bakewell is a small market town and civil parish in the Derbyshire Dales district of Derbyshire, England, well known for the local confection Bakewell pudding. It is located on the River Wye, about thirteen miles southwest of Sheffield. In the 2011 census the civil parish of Bakewell had a population of 3,949.

I have been there several times and on one occasion my parents were gifted a balloon trip for their 50th wedding anniversary. My mum chickened out at the last minute and I took her place! It was amazing. We flew over Bakewell and the Peak district. Amazing!
The card features a Bakewell pudding. 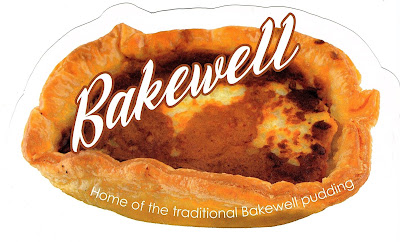 Bakewell pudding is an English dessert consisting of a flaky pastry base with a layer of sieved jam and topped with a filling made of egg and almond paste.
Here is a link to the recipe.
Link
I prefer a Bakewell tart which is similar but has a shortcrust pastry base.

My second card comes from Lithuania and freatures a pretty window in a wooden traditional house. 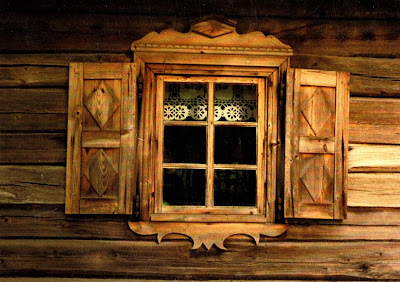 The stamp is beautiful. I had to look up what it was about: 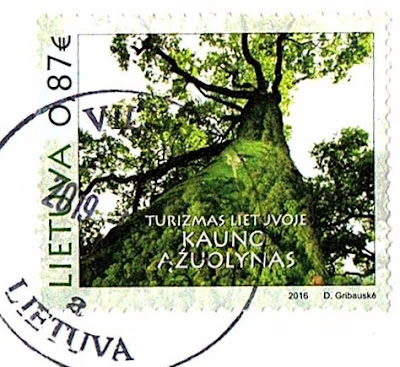 Ąžuolynas is a public park in Lithuania's second largest city, Kaunas. The park covers about 84 hectares and is the largest urban stand of mature oaks in Europe. Vydūnas Alley serves as the park's northern border. It is a popular recreational destination for the inhabitants of Kaunas. 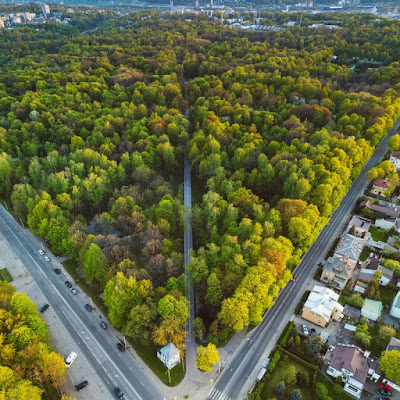 So, what has been happening here in Spain? Wednesday was a local day off, (No gym for me). Caniles celebrated La Vieja, which means: the old woman.

Caniles celebrates "the day of the Old Woman", a festive day in the middle of Lent. These photos are from the local newspaper. 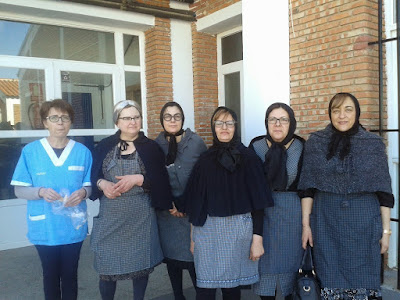 Wednesday Caniles celebrated its traditional "Day of the Old Woman ", a party that has its origin in the popular tradition of "half-way Lent" to cushion the rigors of it, especially fasting and abstinence.
A day of great popular roots and which consists of going out to  spend a day of food or snacks in the country using a bull that was obtained by the people of Caniles to eat meat just on the Wednesday that splits Lent in two. 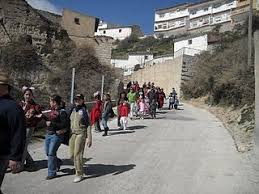 But a day earlier, the brotherhood of San Sebastian dress as "old women" and visit the school, the market, and the City Hall where women offer pieces of cake to pedestrians. ( men also dressed as "old women" ) 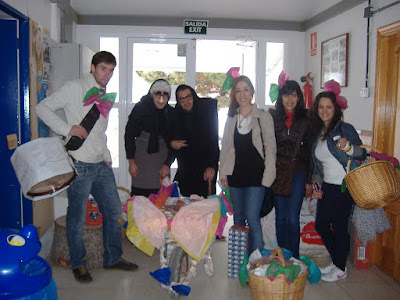 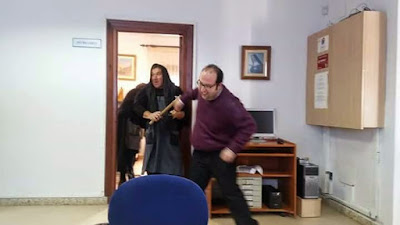 In other places of Spain and in some towns of the Diocese they celebrate this day. The explanation of why an old woman would be the following: just as Don Carnal-the carnival-was fat and likable, Lent is usually represented as an  old, skinny, black woman with scrawny legs. 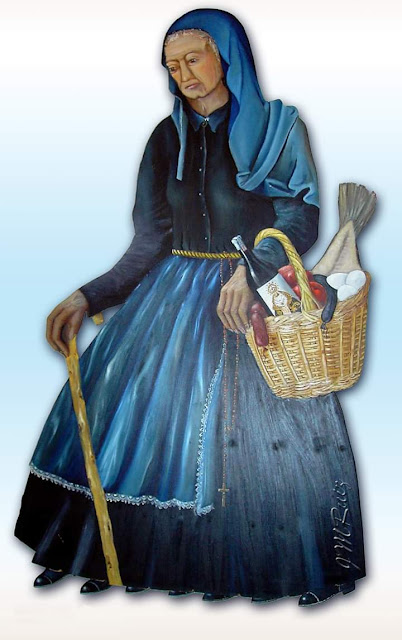 Sometimes she is represented with a basket of vegetables and a cod in her hand (because of fasting) and seven legs (one for each week) which are removed as a "Lenten calendar" until Easter Sunday .

I've been busy getting my little downstairs patio ready with plants etc. We went to the garden centre and bought lots of geraniums and petunias for hanging baskets. While I was looking in the shed for some pots to put them in, I came across this old pot. It belonged to my dad and I remember it hanging in the lounge at my parents' appartment.


I didn't know what it was made of but it turns out to be copper. 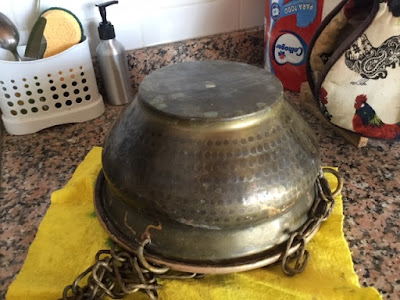 I looked up how to clean it and tried half a lemon dipped in salt. 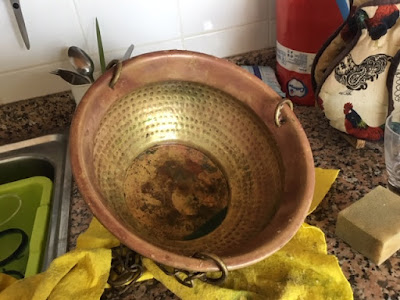 Brilliant! It worked a treat. 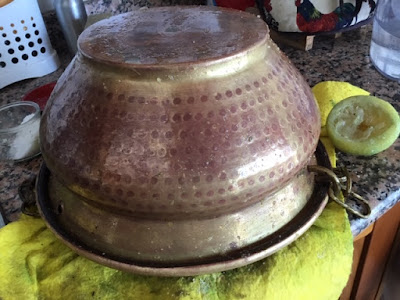 I haven't decided what to put in it yet.  But I will show you when I do. This is what the patio looks like now. The two climbers are Jasmin, which suffered a bit over the winter. (we have cold winters). 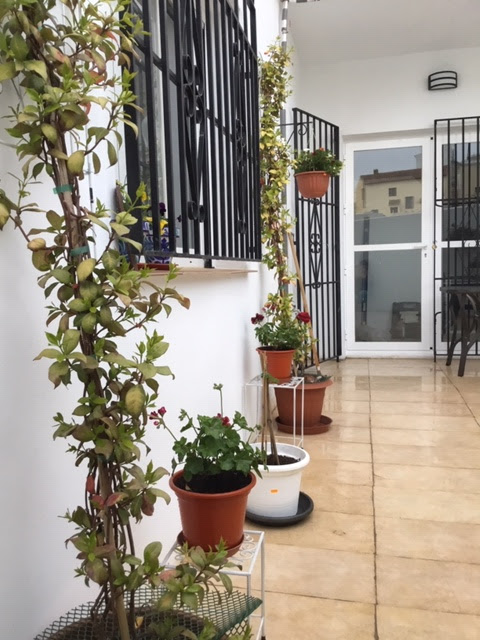 We had an old railway sleeper and hubby stained it, put it on some bricks to make a bench. The the ugly grey plastic drain pipes underneath were painted white and voilá. 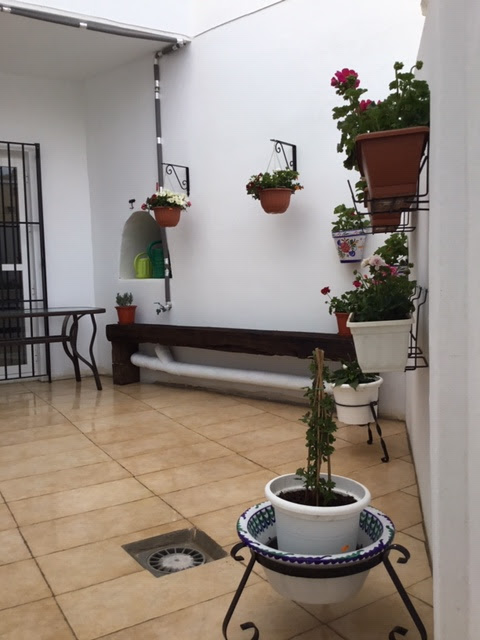 This is the view from the living area. There is a table under the window (inside) and we made the window fairly low so I could look onto the patio while sitting at the table.
Hubby also hung the window boxes on the wall. I absolutely love it. 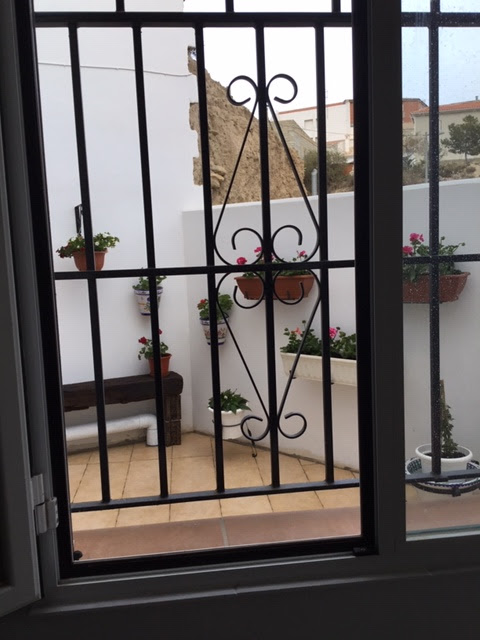 There is normally an outside table and chairs in the middle as we tend to have our meals out there if it is not too hot. I have phoned the chappie who makes the sun shades. He will come in the course of this week to measure up and give me a quote.  Then we can sit in the shade.

That is it from me this week. Have a great first week of April,
take care,
Hugs,
Lisca

I hope everyone has had a lovely Easter holiday. Here in Spain Easter Monday is a normal working day so everything has gone back to normal after a hectic Holy Week. I managed to make time to make ‘pasta mandorle’, a typical Easter treat from Abruzzo in Italy (where I used to live). It has almonds, eggs and bitter chocolate in it. Yumm! 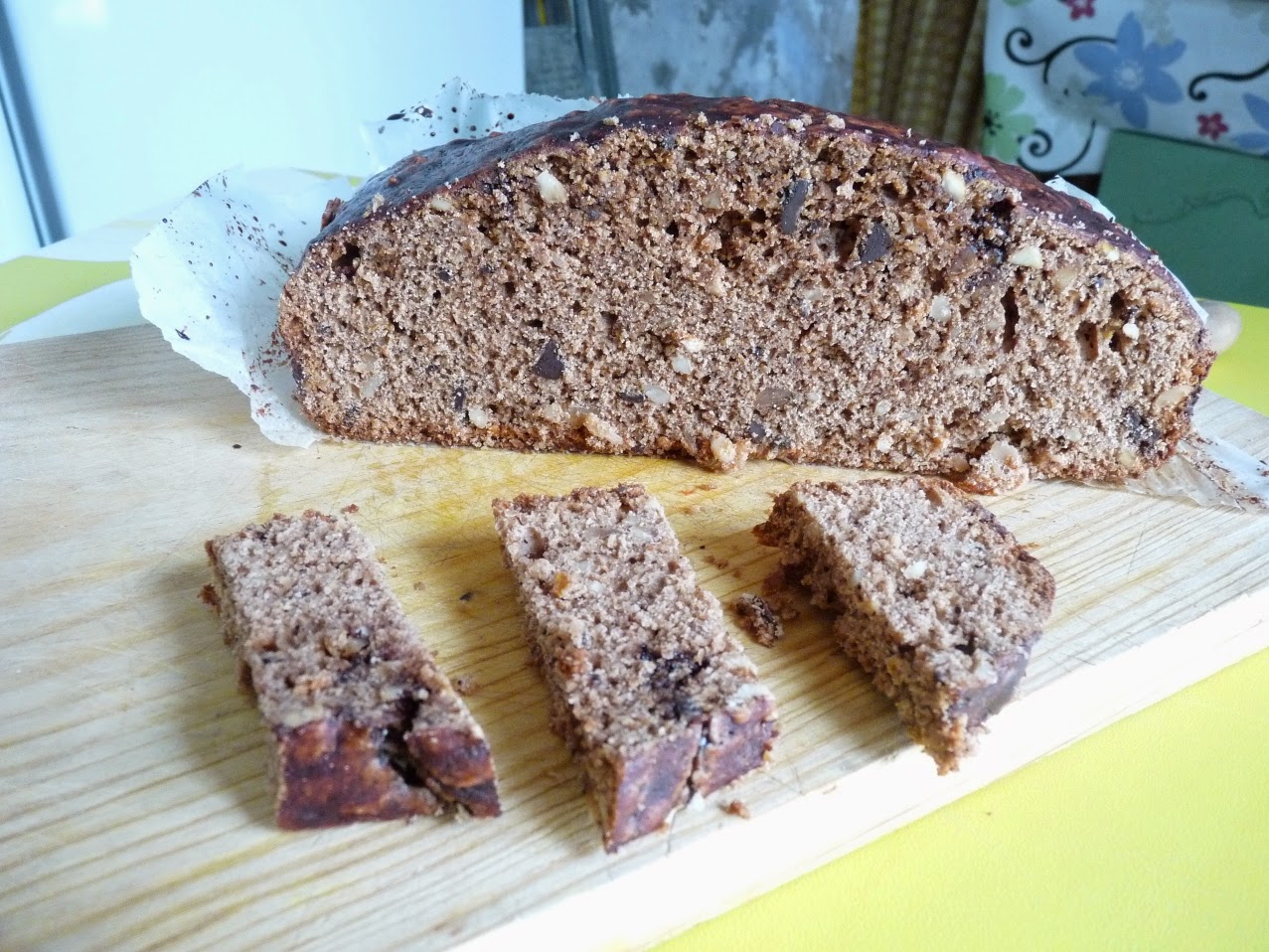 It’s Wednesday again and today I’m showing you the desk (i.e. table) with all the action. This is at my friend Antonia’s house (the lady on the right). My friends wanted to start scrapbooking and I had promised to do a session with them. We did A4 format as that format is easiest to buy things for in the local shops. I took a crate full of stash over to Antonia’s and here we are having scrapping fun. On the left is Patricia from Mexico and in the middle is Patricia from Peru. Antonia is Spanish and I am Dutch. Quite the united nations! 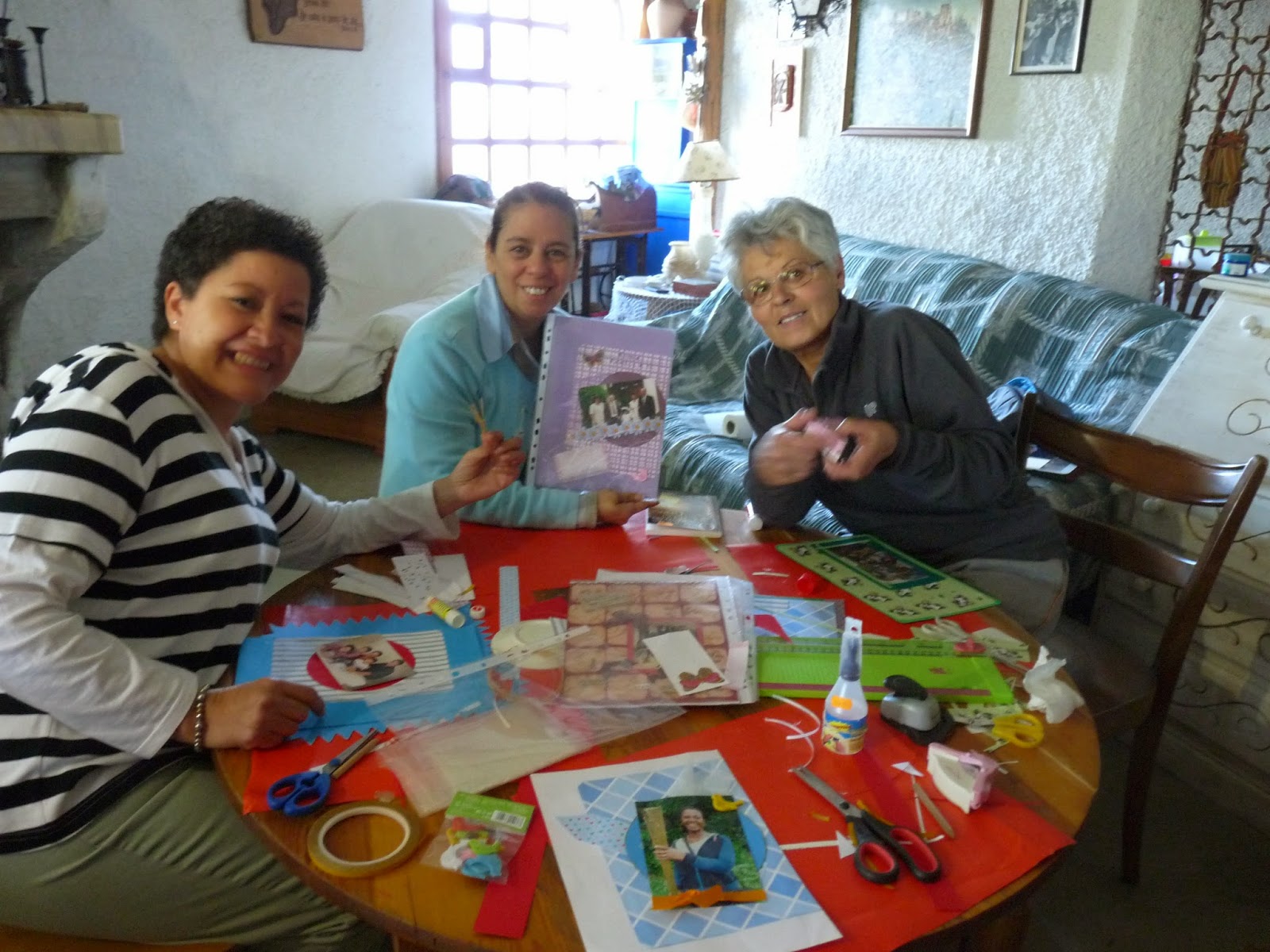 While we waited for the other girls to arrive Antonia showed me her cheese making equipment as she had made a lovely goat’s cheese the week before. The freshly made cheese gets put in the baskety round thing that then gets tightened. A weight is put on top so that the liquid is being squeezed out and runs along the little ‘channels’ into a bucket. Clever he? 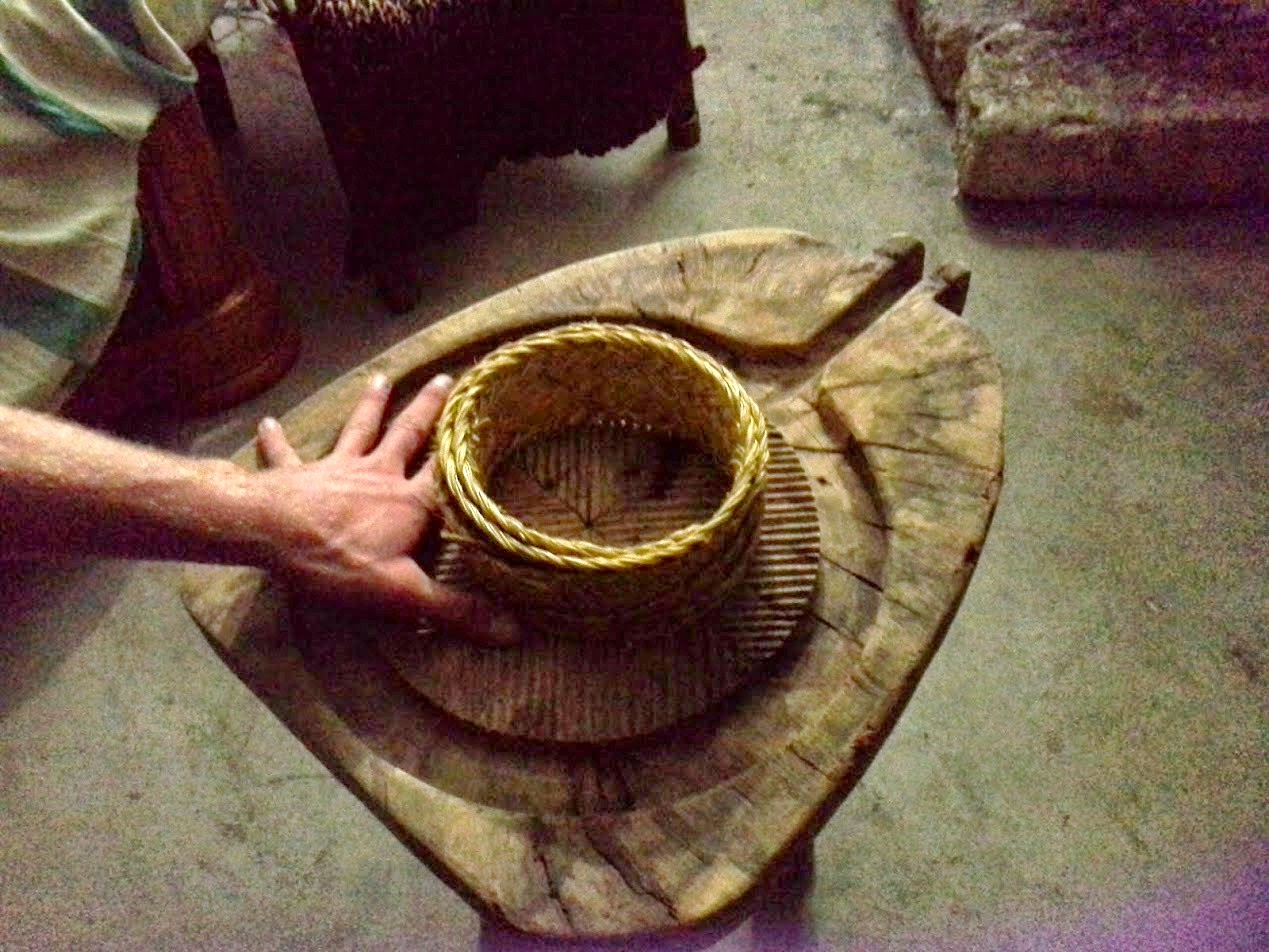 Where in England people drink tea and in US girls drink coffee when they get together, here in Andalucia we drink ‘infusion’ or herbal drinks. Sometimes we use ‘tea’ bags we buy in the shops but more often than not they are dried herbs that have been picked locally. Some herbs are quite bitter so I usually add a leaf of Stevia ( the dried leaves in the plastic bag). 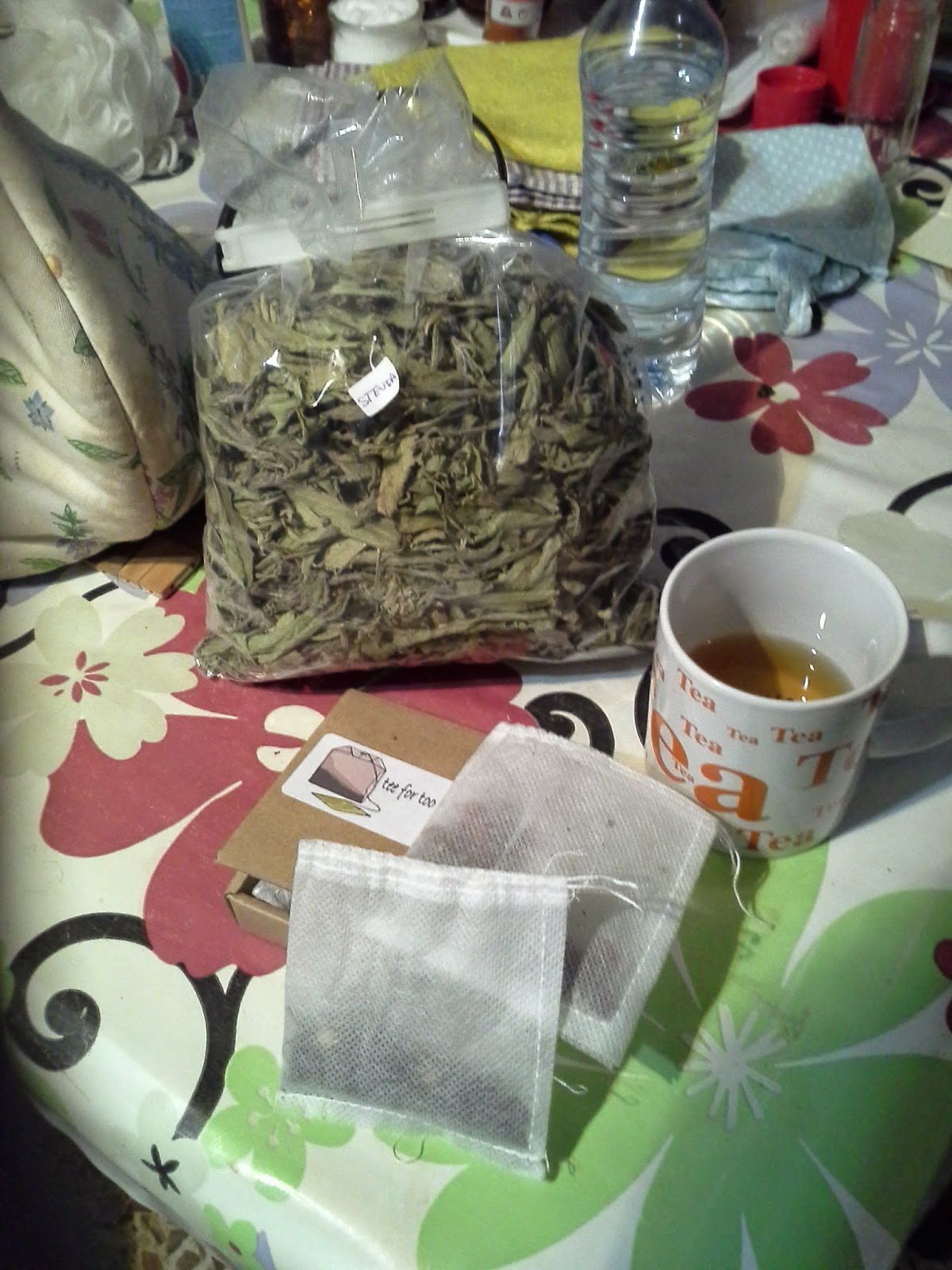 They are real sweet. I want to watch my weight but don’t like to take artificial sweeteners. This is a really good solution.  Many of my friends are from South America, and they are in the habit of drinking a caffeinated herbal drink called ‘mate’ (pronounced: ma-tay). 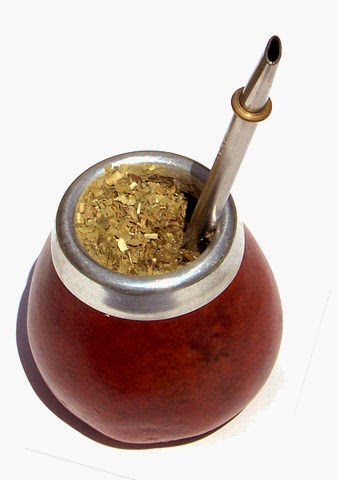 It is drunk from a special beaker and a straw. Drinking through the straw prevents you getting ‘bits’ in your mouth. 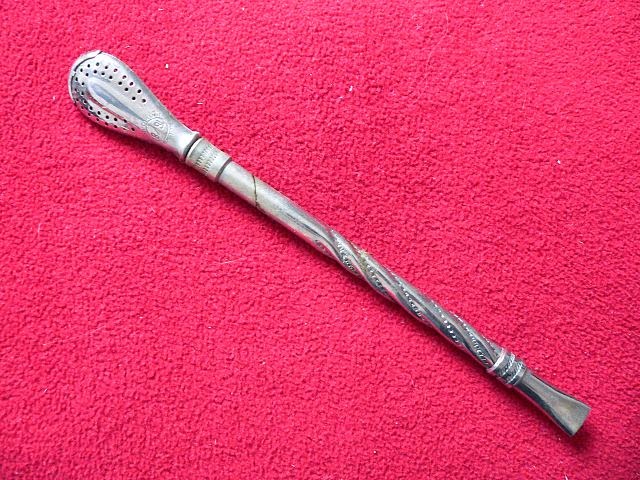 The beaker gets passed around and everyone gets a turn. The same beaker gets filled up with hot water after each person has had a drink. These photos I got from Wikipedia as I forgot to photograph my friends’ beaker (which is a shame because hers is much nicer).
Posted by Lisca at 00:02