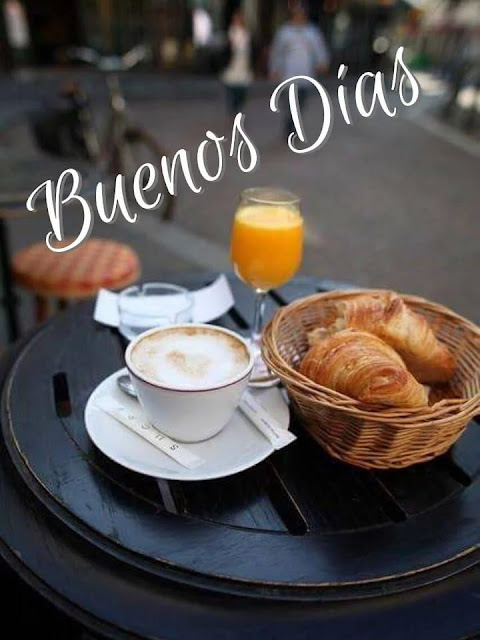 Good Morning! I'm late this morning. Usually I write my blog the night before but that was not possible. We were late birds and did n't go to bed until 2 am, by then it was too late to sit at the computer and compose something. So here I am, sipping some juice while I hear my hubby gently snoring.

Let me start by saying that Elizabeth and Bluebeard have a temporary new blog address: https://alteredbooksandmixedmedia.blogspot.com/

My first postcard comes from Germany, from a guy called Alex. Now I know as well as you do that there are no large volcanoes in Germany! So where is this? 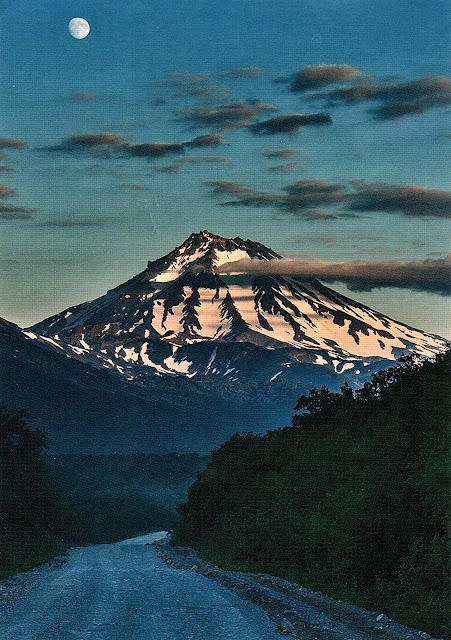 It is the Viluchinsky Volcano in the Kamchatka Peninsula in Russia's far east. It is so far east that it nearly touches Alaska. Alex writes that he bought the card in Russia when he was visiting there, but that he has never been to the east of Russia.

The stamps are lovely and new to me:

Heinz Sielmann, who features on the first stamp. He was a wildlife photographer, biologist, zoologist and documentary film maker. He was a household name in Germany where he started to work for television in 1956 and his tv program Expeditionen ins Tierreich (Expeditions into the animal kingdom) had 153 episodes and ran until 1991.
The second stamp commemorates the 200 years of Rheinisch Friedrich-Wilhelms univerity in Bonn.

The University of Bonn (German: Rheinische Friedrich-Wilhelms-Universität Bonn) is a public research university located in Bonn, Germany. It was founded in its present form as the Rhein University on 18 October 1818 by Frederick William III, as the linear successor of the Kurkölnische Akademie Bonn (English: Academy of the Prince-elector of Cologne) which was founded in 1777. The University of Bonn offers a large number of undergraduate and graduate programs in a range of subjects and has 544 professors and 32,500 students. Its library holds more than five million volumes.

The next card comes from the Ukraine. (Have I showed you this one before?). I have no idea what the writing says and as i can't read cyrillic script, I can't look it up. 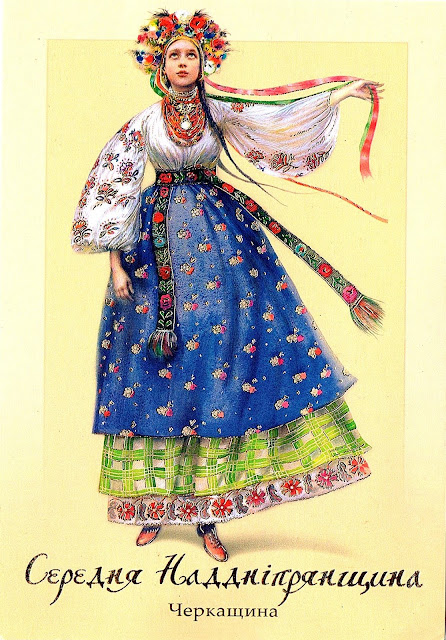 The stamps are really gorgeous. The double one on the right is about the Ukrainian Monetary Unit. The one on the left is the Freedon Square in Kharkiv. The flower is from a series about the Karpathian Biosphere Reserve.

We've just finished Holy Week here in Andalucia. It has been a week of processions in the village. The people take these processions very seriously. We keep well away so this picture was taken by a friend from the photoclub. 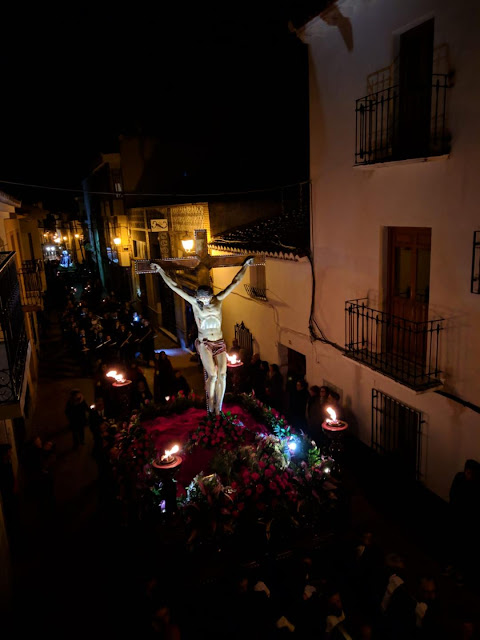 Our friend Dian gave us some fresh garlic from her garden. Here I am cleaning it. I will keep it in the fridge. 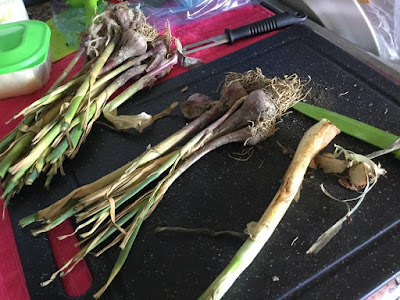 Did I tell you that my succulent plant was going to flower? Well, it has: 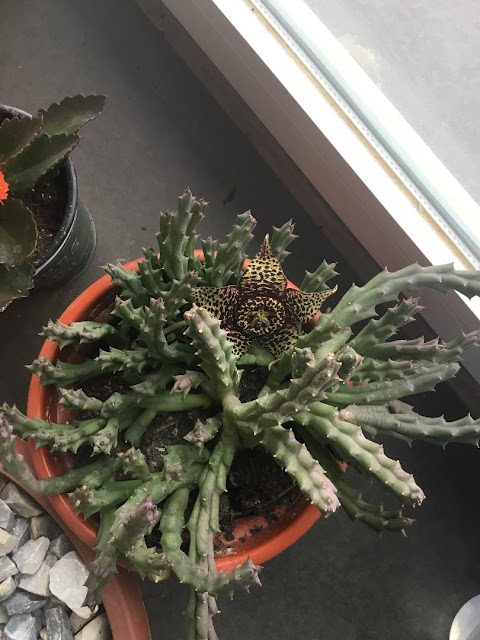 It is called an Orbea Variegata (starfish plant) also known by its former name Stapelia). 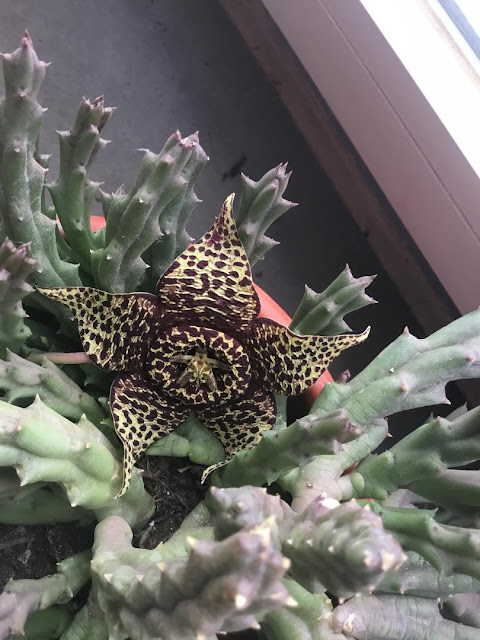 With the shops shut so many days last week, it was handy to make my own bread. I don't take much credit as i have a bread maker, but I do have a good recipe, which I alway use and the bread always turns out beautiful and yummy. (and I use filtered water) 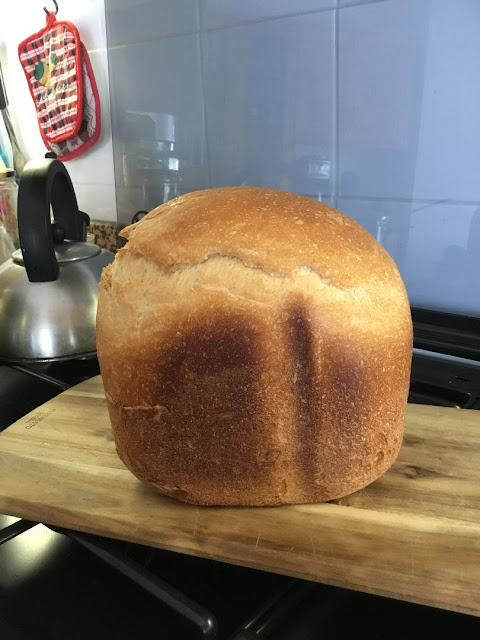 I can't find my picture of 'coffee and cake' that would qualify me for Elizabeth and Bluebeard's T for Tuesday, so the kettle in the back ground will have to do a well a the first photo at the top of this blog.

I'm going to head off to Bluebeard and Elizabeth's (b)earthday T-Party. Remember there is a new address (https://alteredbooksandmixedmedia.blogspot.com/)

Have a lovely Tueday all,
Happy T-Day,
Lisca
Posted by Lisca at 10:09