Hope you have all had a good weekend and are back to normal with renewed enthusiasm.

I have a long 'to-do' list today which includes going to the gym, having my bloods taken at the health center and getting together with my girl friends for a prayer meeting. Of course I have to get our 'daily bread' at the baker and go to the post office and order some stamps. 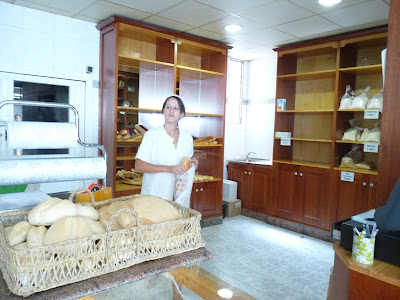 It's Monday and on that day I usually make a menu for the whole week, so i know what sort of things to look out for when we do our weekly shop later today. We have our main meal in the day, so that meal needs to be cooked. We eat at 3 pm, after which we (my DH and I) go grocery shopping. My DH comes with me as I can't drive our 'truck'. I can't reach the pedals!

I have two cards to show you today. They both show a part of Friesland. Here is a map to show you where it is: 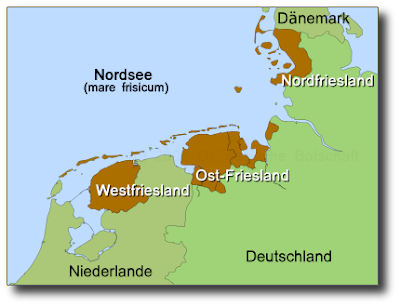 The brown bits are Friesland (Frisia). Most of it is in Germany and the western part is in the Netherlands. They have their own language. I go to Friesland occasionally as my two cousins live there. Frisian is the official language there and all the street signs are in both Dutch and Frisian.

Here is what Wikipedia writes about Frisians:

The Frisians are a Germanic ethnic group native to the coastal parts of the Netherlands and Germany. They inhabit an area known as Frisia and are concentrated in the Dutch provinces of Friesland and Groningen and, in Germany, East Frisia and North Frisia (which was a part of Denmark until 1864). The Frisian languages are still used by 500,000 speakers; dialects of Frisian are recognized as official languages in both the Netherlands and Germany. 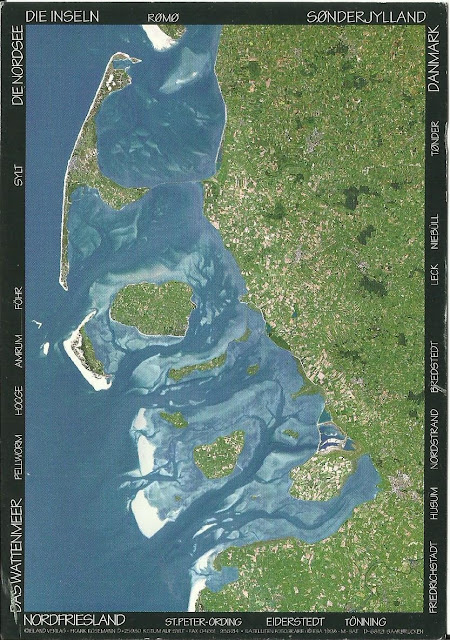 The above postcard is a satellite photo of North Friesland (the northern brown bit on the top map).  I recognize the island that looks a bit like a letter T. 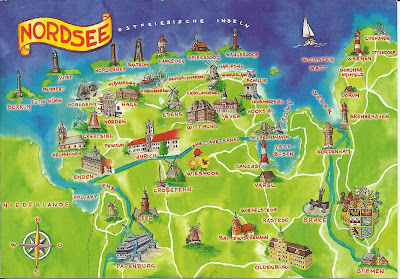 This card is Eastern Friesland. (The middle brown bit on the top map). Like North Friesland, it is part of Germany.

I don't have a map card of the Dutch part of Friesland (yet).

The stamps are beautiful: 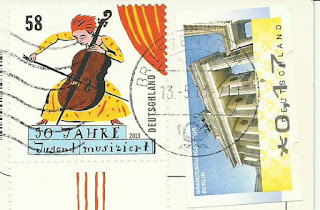 The cellist on the left celebrates 50 years of youth orchestras and the stamp on the right features the Brandenburg Gate in Berlin. (Restored 18th century gate & landmark with 12 Doric columns topped by a classical goddess statue)

Two lovely flowers on the left are the Tulip and the Tagetes (Marigold). The stamp on the right is part of a series of light houses. This one is the lighthouse on Fehmarn Island (Schleswig-Holstein).

The famous Flügge lighthouse on Fehmarn Island's south-western peninsula is striking. It's been operating since 1916 and is almost identical to the Neuland lighthouse on Hohwachter Bay. It's 37 m tall, and was originally yellow with a red lantern. Since 1977 it has been covered in characteristic red-and-white glass plating.

That's it from me for today. It has become a bit long so well done if you are still with me!
See you tomorrow when I link up with T for Tuesday.