Here in Spain it is a  national holiday. A bit like a Bank Holiday in UK. It is National Spain Day. It celebrates Nuestra Senora del Pilar (Our Lady of the Pillar), the patron saint of Spain. We don't notice much here in the village but there are big parades in the capital that are televised. For most people here it is just an extra day off.

My map card today can't be anything other than a Spanish card: 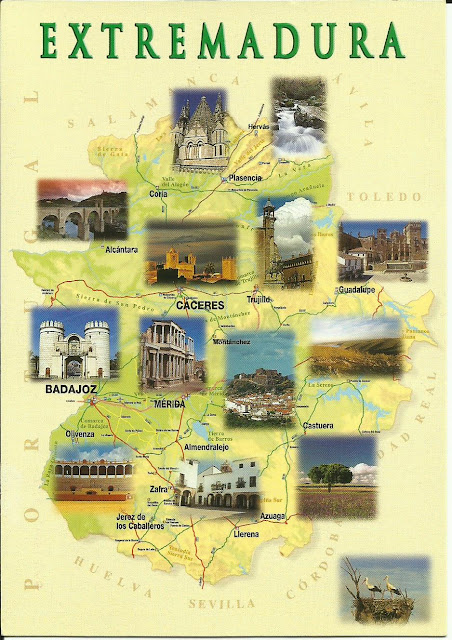 It is a region of Spain called the Extremadura.

Extremadura, is a western Spanish (autonomous) region bordering Portugal; it comprises the provinces of Cáceres and Badajoz. It’s a remote area of mountains, forests, lakes and reserves, notably Monfragüe National Park and Cornalvo Natural Park, both sheltering diverse birdlife. The capital, Mérida, is known for its well-preserved Roman ruins, including aqueducts, theaters, a circus and a long bridge over the Guadiana River.
The stamp is interesting: 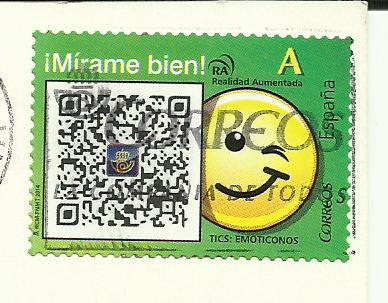 The text translates: 'Have a good look at me'. And it features some sort of bar code and a winking emoticon.The stamp is issued in a series to do with Tecnologías de la Información y la Comunicación (TIC), translated: information and communication technologies (ICT). I found out that the bar code shows a video about Realidad Aumentada (augmented reality).(But I don't know how to read it...)

Isn't that interesting. That's it for today,

See you tomorrow when I link up with T for Tuesday.