Hello lovely ladies, How are you all? It's Tuesday again (The weeks fly by so fast!) and time to share a drink at the T-Party organized by Elizabeth and Bleubeard.

I have two postcards for you today. Both with a baby on it. The first one comes from the Netherlands and features this gorgeous baby: 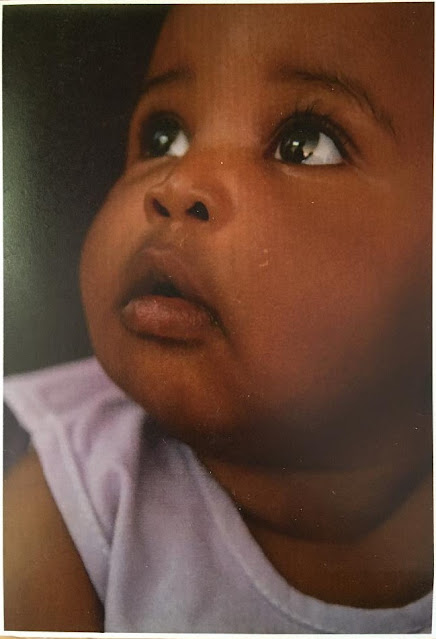 The card was issued by a charity called Orangebabies.nl. (Orange Babies helps pregnant HIV-infected women and their babies in Africa. Because they are the most affected by the AIDS epidemic and the last to receive aid.)
They have now also added Covid mothers to this remit.
Aids is still very much rife in Africa.
HIV (Human Immunodeficiency Virus) is the virus that causes AIDS (Acquired Immune Deficiency Syndrome). Someone infected with HIV is called seropositive. Once you are seropositive your immune system doesn’t work properly anymore.You speak of AIDS when your immune system cannot protect the body against all kinds of infections and conditions anymore. The body becomes weaker and without treatment a person will die of the consequences of AIDS.

The second postcard has a very privileged baby indeed: 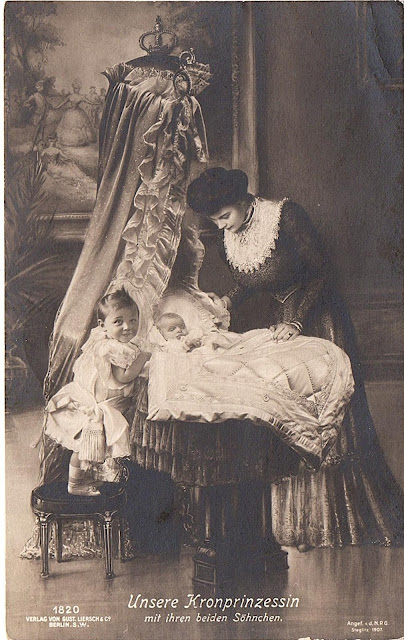 The caption reads: "Our crown princess with her two little sons."
Ruth, who sent this to me, says it is crown princess Cicely of Prussia, the last crown princess of the German empire. She is seen here with her two sons, prince William of Prussia and the baby, prince Louis Ferdinand, born in November 1907.
The number 1820 at the bottom of the picture is not a date but a serial number of the card. (It did confuse me to start with). The baby in the photo is Louis Ferdinand.
Louis Ferdinand was born in Potsdam as the third in succession to the throne of the German Empire, after his father, German Crown Prince William and elder brother Prince Wilhelm of Prussia. The monarchy was abolished after Germany's revolution in 1918. When Louis Ferdinand's older brother Prince Wilhelm renounced his succession rights to marry a member of the untitled nobility in 1933 (he was later to be killed in action in France in 1940 while fighting in the German army), Louis Ferdinand replaced him as second in the line of succession to the defunct German throne after the Crown Prince.
Here is another image of the princess with her two sons. She went on to have two more sons and two daughters. 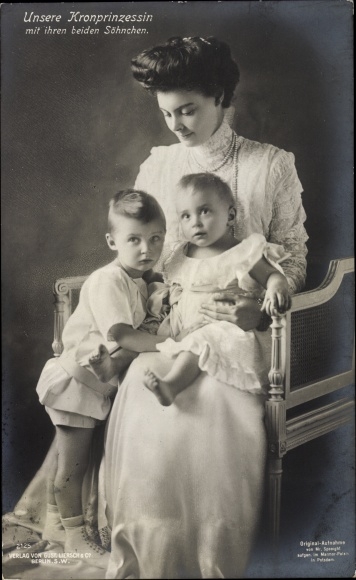 Louis Ferdinand was educated in Berlin and deviated from his family's tradition by not pursuing a military career. Instead, he travelled extensively and settled for some time in Detroit, where he befriended Henry Ford and became acquainted with Franklin Delano Roosevelt, among others.

Here he is as a boy: 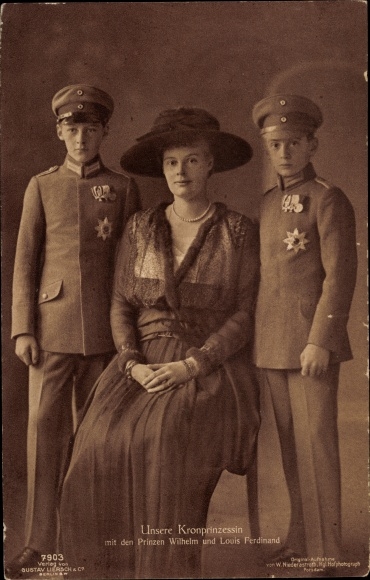 He held a great interest in engineering. Recalled from the United States upon his brother's renunciation of the throne, he got involved in the German aviation industry, but was barred by Hitler from taking any active part in German military activities. Louis Ferdinand dissociated himself from the Nazis. 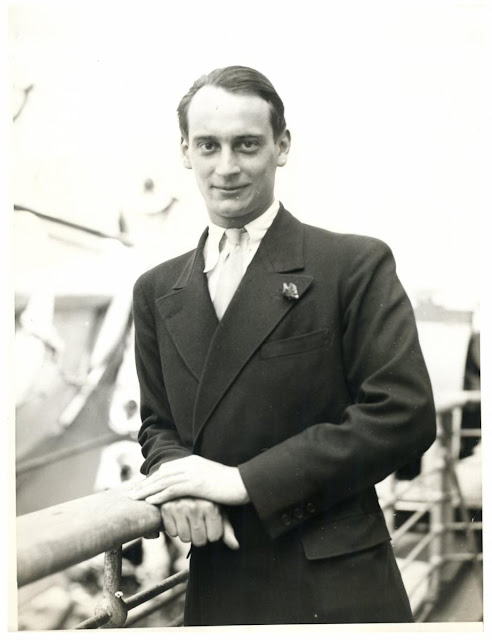 This photo is from ca 1931.
Apparently he was very popular in Germany after the war.
I also found a photo of him with Prince Charles: 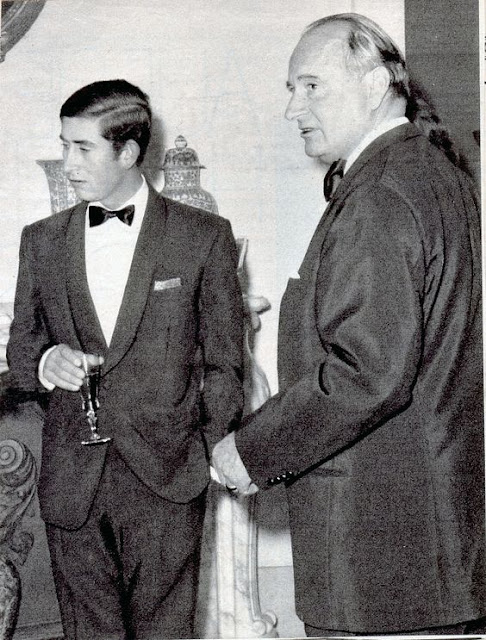 The stamp is lovely. It shows Meadow knapweed. 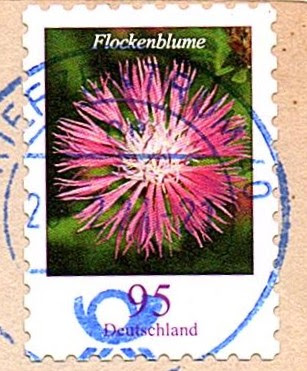 My drink for the T-Party is some beer that we had with our friends on their terrace. There is a story to those beers.....
We have a glass table on the terrace on the 3rd floor. As we no longer live there and don't use the terrace, it is a waste of a table. It doesn't fit in our tiny patio, so we were going to get rid of it. I was going to advertize it on the Spanish equivalent of Gumtree, but with hubby in the hospìtal I never got round to it. Now it's too late as most people have got their patio/terrace furniture.
When our Danish friends mentioned they were looking to buy a table for their terrace, we went: Yesss!
The frame is solid metal and weighs a ton. So it was quite an operation lowering that down all the floors. 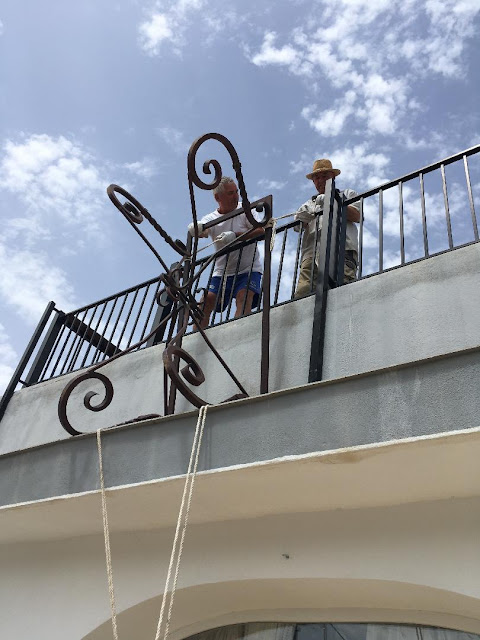 My friend and I had to keep the table from scratching the ledge by pulling on the ropes. 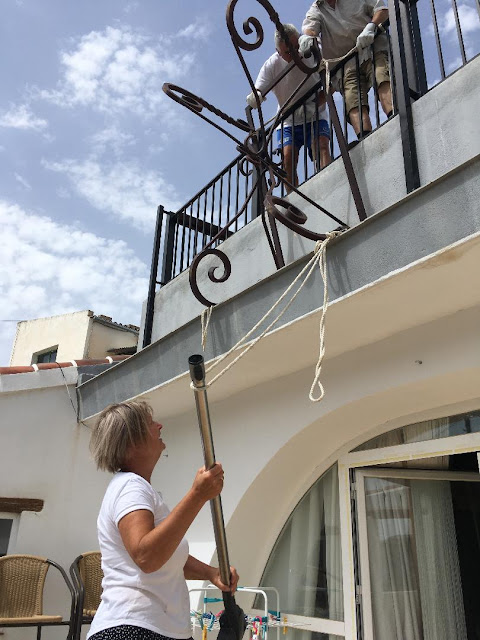 We got it safely to the ground. Phew! 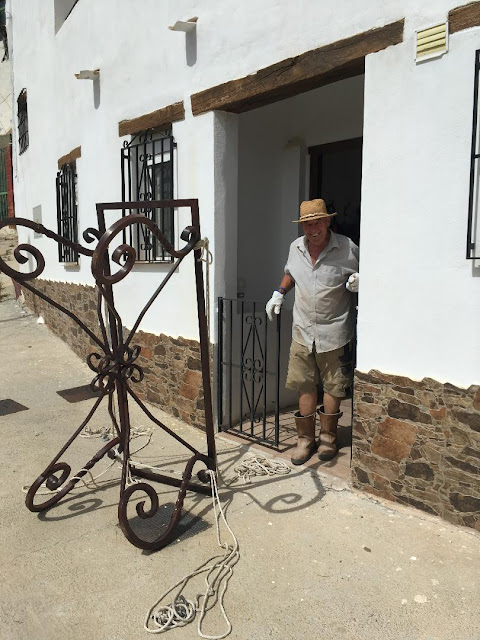 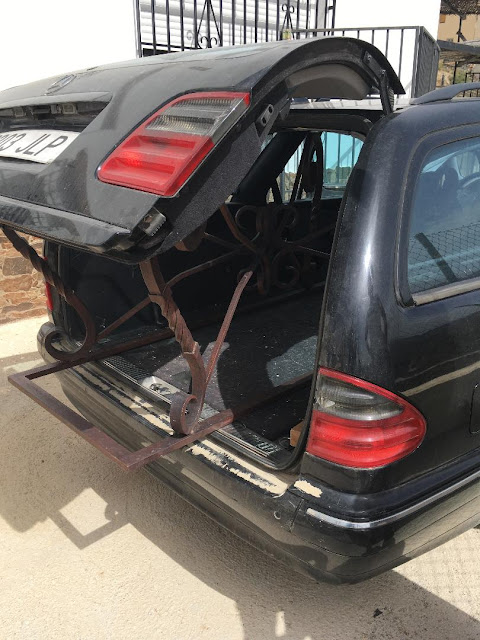 We didn't dare do the same thing with the glass top. That had to be carried by hand down the stairs. 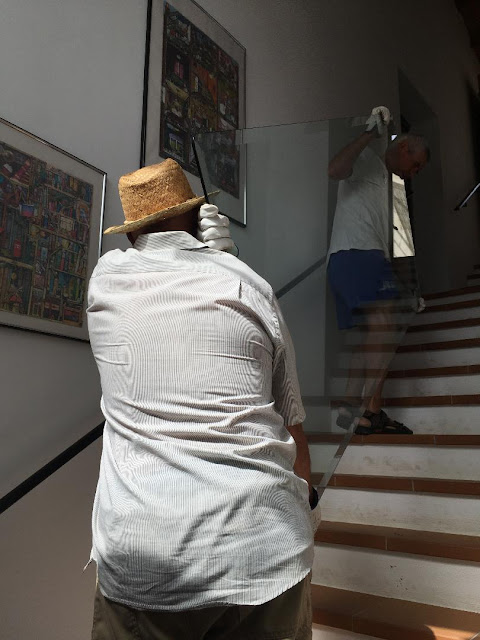 It also went into the back of the car. We had a giggle as the Mercedes is black and we always joke that he has a funeral car. (It's not as it has normal windows in the side). We were walking behind the car to prevent the trunk/boot lid from damaging the glass when the car goes over a bump. They only live round the corner, but we did laugh as we looked like a funeral procession. 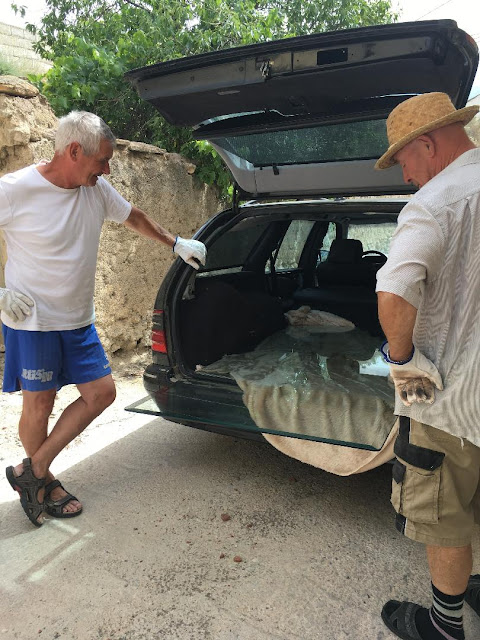 The glass got carried indoors and onto the terrace. 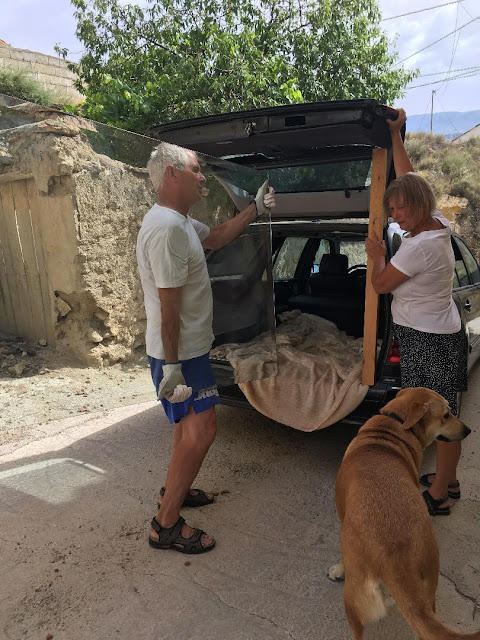 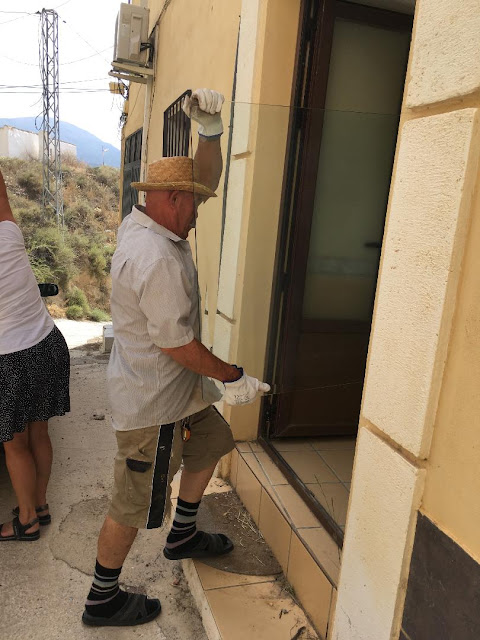 Here we are on the terrace. The orange colour is caused by the sun screen. 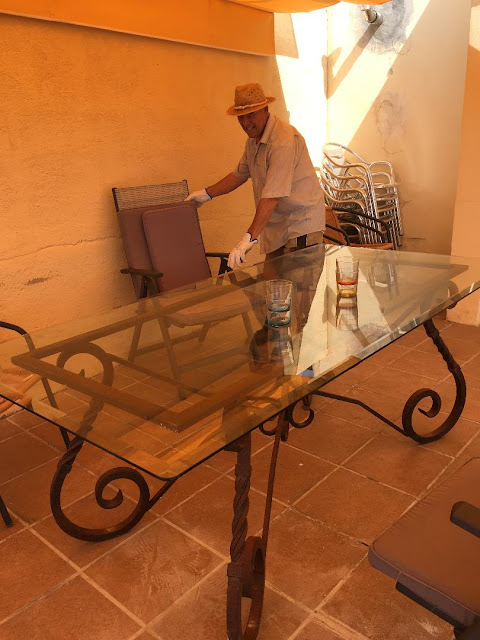 After all that work we had a cold beer at the new table. I'm on the right and above my head you can see a piece of our house (the white one). 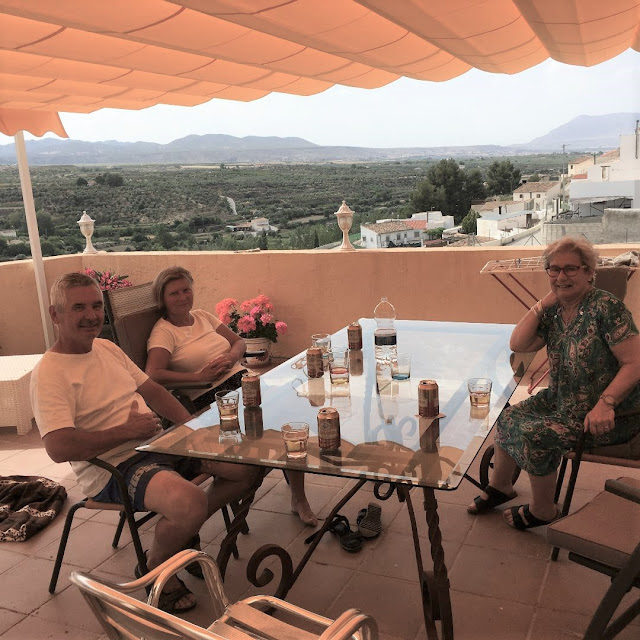 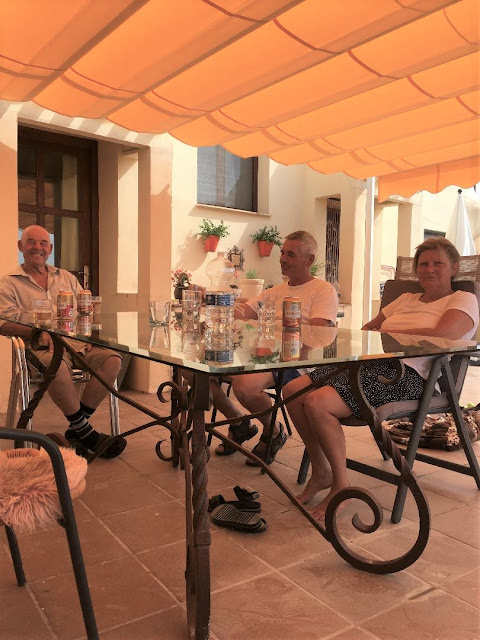 That is all from me today.
Happy T-Day all of you,
Take care,
Hugs,
Lisca