A Postcard A Day - Tuesday 28 September 2021 - T for sweets, holidays and Iberian ham

I'm actually on holiday at the moment and all I have is my iPad. So I hope that I will be able to write this and post it.

My postcard for today comes from Russia. It has some really yummy vegetables on it. It really looks like it could have come from our market. Our tomatoes look like that. 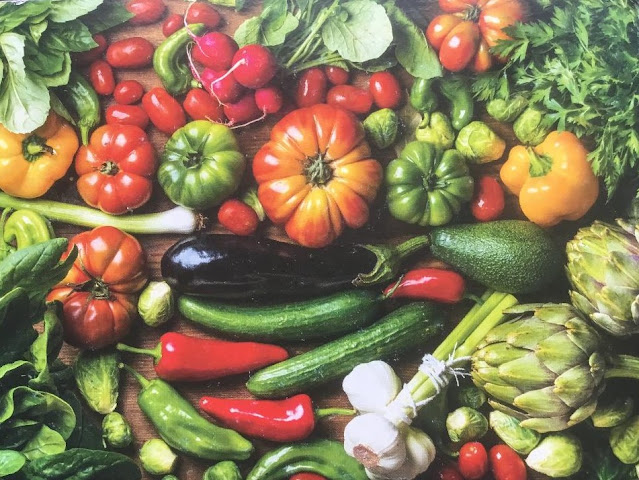 The person that sent the card is Anya and she writes that "everyone here is collecting harvest on their 'dachas'. A dacha is a small country house usually with a vegetable garden".
The stamp is impressive: 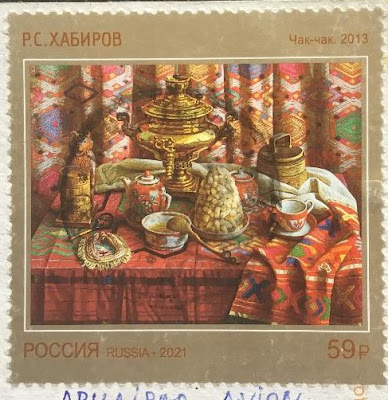 It is a painting by R.S.Khabirov (2013) called 'Chak-chak'.
This stamp is from a series Contemporary Art of Russia.
The Contemporary Art series of postage stamps presents the artwork of modern authors who convey the atmosphere of new Russia, its identity and dynamism, demonstrates the techniques and approaches to creating paintings and sculptural compositions that are peculiar to our times.
Rashit Sultanovich Khabirov is a painter, Honored Artist of the Republic of Bashkortostan, a member of the Union of Artists of Russia. In 1977, he graduated. In his work, he follows the realistic traditions of academic painting, is considered an unsurpassed master of subject portraits, still lifes, landscapes. Participant of republican, all-Russian, international and foreign exhibitions, as well as the Paris World Autumn Art salons.
Here is a better image: 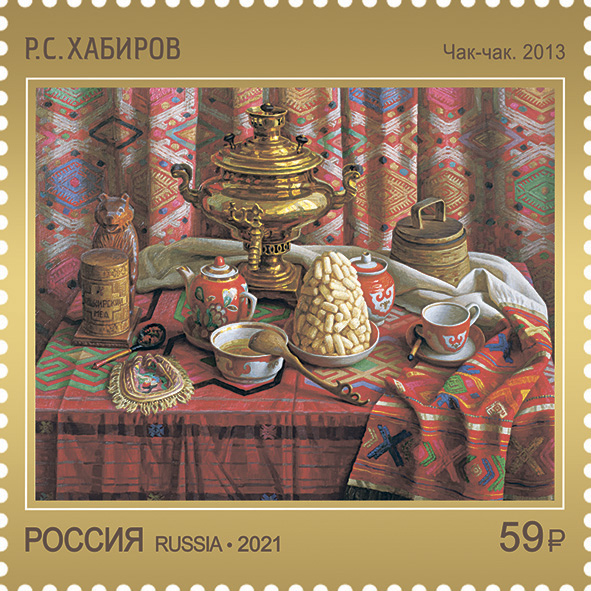 The painting features a samovar to keep the water hot, and a tea pot (or is it a coffee pot?) with some cup and saucers. The chakchak refers to a cone shaped sweet that is also on the table. 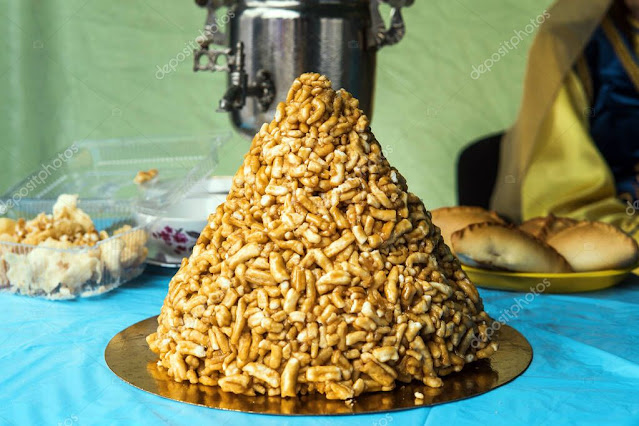 Chak-chak (Чак-чак) (chak-chak) is a dessert food made from deep-fried dough drenched in a hot honey syrup and formed into a certain shape, most commonly a mound or pyramid. It is popular all over the former Soviet Union. In Russia, chak-chak is especially associated with the Tatar and Bashkortostan republics, where it is considered a national dish. However, Central Asian nationalities such as Uzbeks, Kazakhs, and Kyrgyz also lay claim to the dish… and it may have been originally taken from the Chinese. While the basic recipe is always very similar, how it is made differs from region to region. 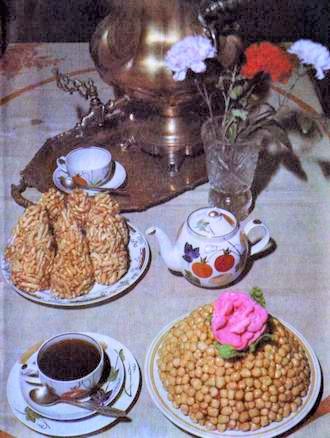 Chak-chak is a symbol of celebration and hospitality. A whole made of many pieces, it symbolizes unity. Covered in honey, a natural preservative, it also lasts for a fairly long time – up to three weeks so long as it isn’t devoured quickly. 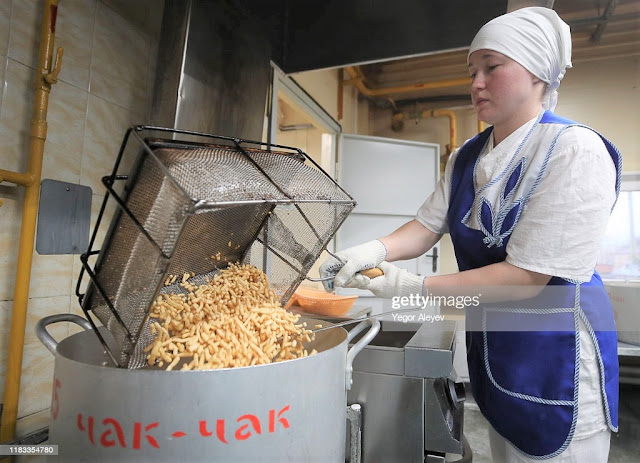 This is also my T-Party qualifier. Elizabeth and Bluebeard host this T-Party and all I need is a beverage. I'm not only sharing a beverage but also a sweet treat (chakchak).
My week has been good. The weather is still warm and sunny and hubby is having a break from his chemo. So we have decided to go on a little holiday. We are fortunate to live in a beautiful country and not from from us is the Cabo de Gata natural Park.
We have visited before and really like it. It is unspoilt nature. No hotels or nightclubs. In fact we are staying on a campsite and will be sleeping in our tent. 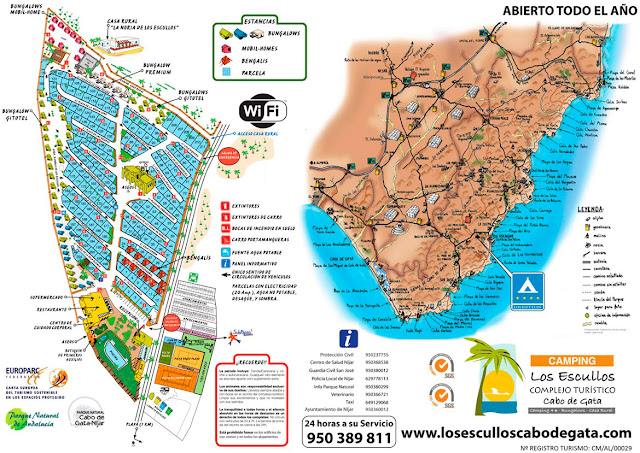 Here are a few places we have already visited (as I am writing this in advance): 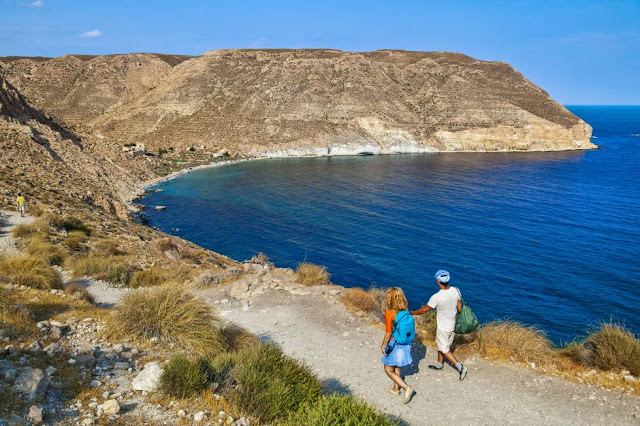 Below is a restaurant where we had a lovely dinner right by the sea (a few years ago). 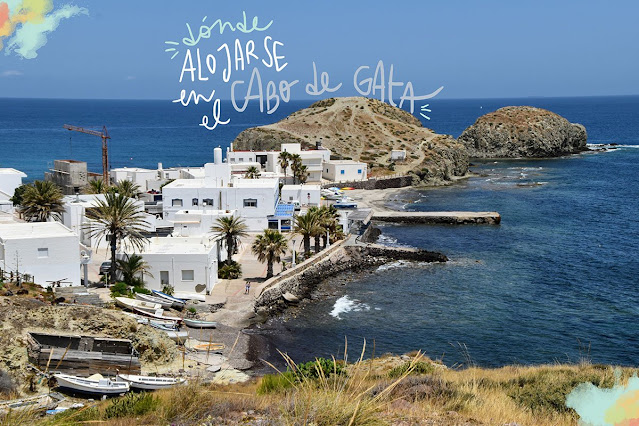 Our village has several ham producers. Or should I say ham dryers. Our ham is dry-cured and as the air is so dry here, apparently the climate is perfect for dry-curing ham.
This is El Veleta on the roundabout to enter the village.

We mostly eat jamon serrano, but they also dry Iberian ham . Iberian ham is very expensive as it comes from a special black pig.
Here is a video about the ham.
One of the ham dryers of our village holds a yearly ham-cutting competition. Cutting the ham is quite an art. 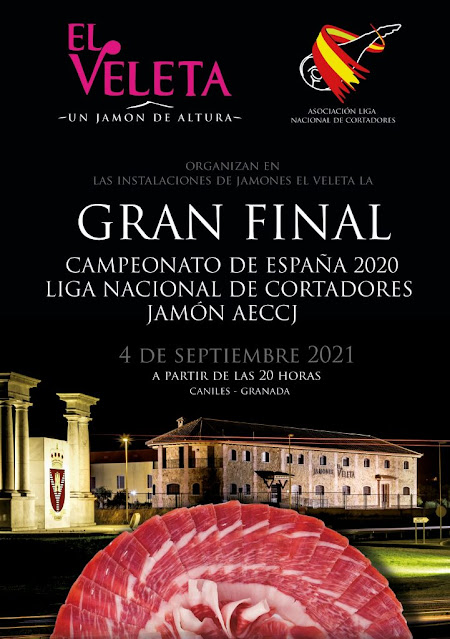 It is cut in small slices and arranged on a plate: 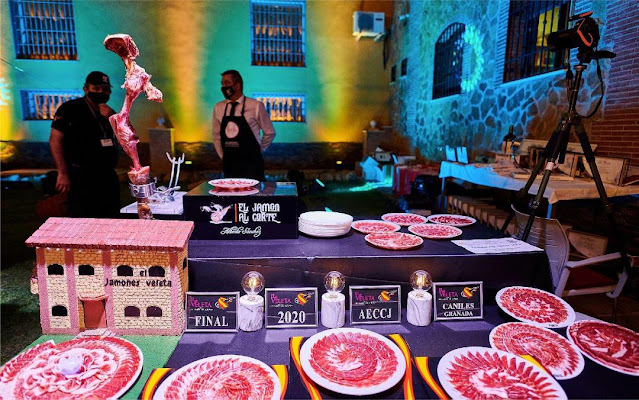 I didn't actually attend but here are some photos from the local paper: 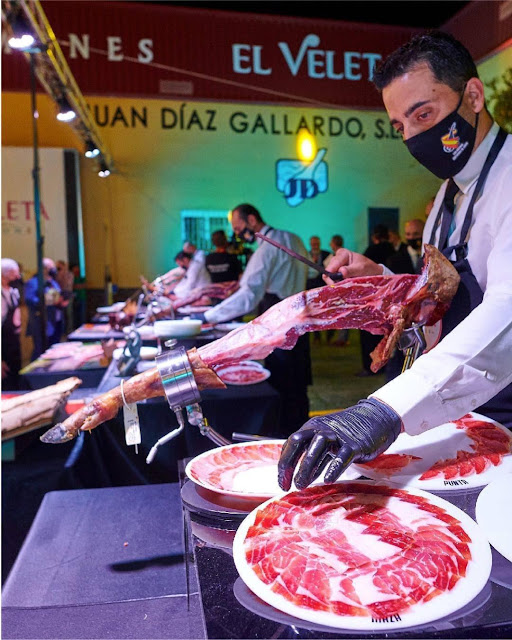 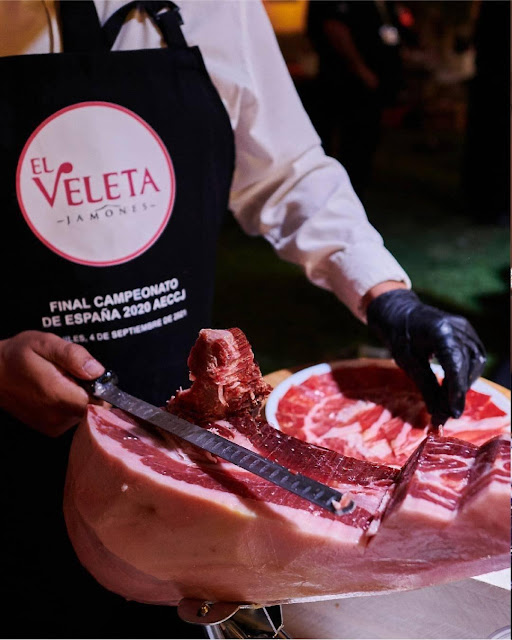 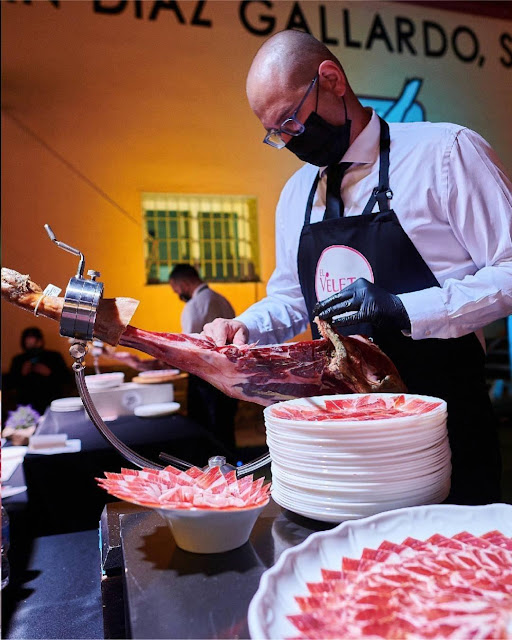 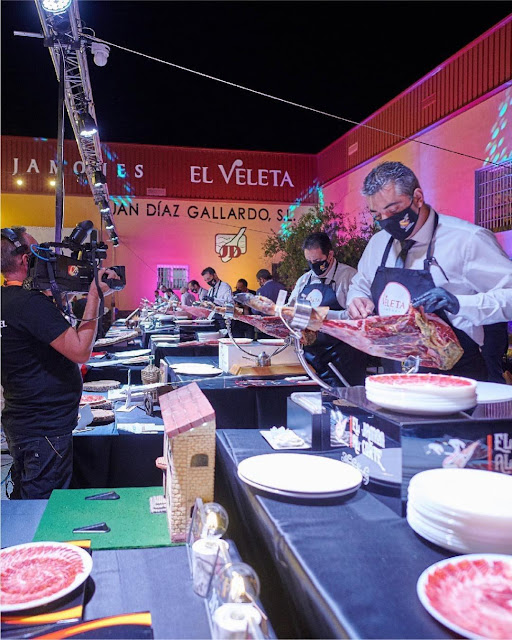 I don't know who won in the end, but I think they all did a fantastic job. Every plate is a work of art.
That is it from me today. As I said before, I will schedule this and hope for the best.
Happy T-Day all,
Greetings from Andalucia (Cabo de Gata),
Hugs,
Lisca