A Postcard A Day - Tuesday 23 February 2021 - T for reading ladies, almond blossom and a partridge

Hello lovely ladies, Here we are again on Tuesday to visit the T-Party. I hope our hostess Elizabeth is feeling better. (and warmer). It's wonderful to have some cats to cuddle up to when it is cold.

This first colourful one is (you might have guessed it) by Vincent van Gogh. It is entitled 'The Novel Reader', 1888. 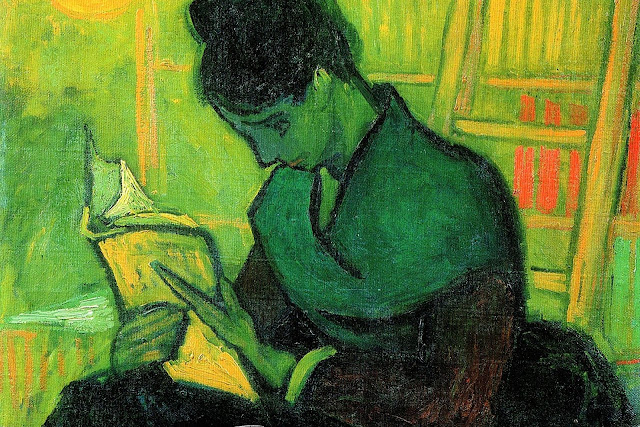 I found this little bit of interesting info about this painting and women reading books:
"Particularly noteworthy here is the book in the woman's hands. To a viewer of our time it seems innocuous, but a viewer of Vincent's day would instantly identify the book as a "modern" novel, typically published as yellow-covered paperbacks. Books are a recurring motif in van Gogh's work; often he depicts the novels that he enjoyed so much, by authors like Zola or the Goncourts. But such novels were acceptable reading for a man -- not for a woman. Vincent differed from most men of his time in believing women *should* read modern novels, so they themselves could be modern in thinking and worldview. As art historian Judy Sund* says it, for "this imagined female...[to be] reading a yellow book (i.e. a modern novel) with wide-eyed attention reflects the artist's conviction that everyone should read, and suggests anew that his conception of the ideal woman included a devotion to the modern fiction that was modelled on his own" ("Favoured Fictions," p. 260). Vincent's surviving letters to his sister Wil include many reading recommendations. In the letter mentioning "La Liseuse de Romans," he says, "It is a very good thing that you have at last started to read Au Bonheur des Dames" [a novel by Emile Zola about a girl working in a Parisian department store]. We can contrast Vincent's attitude with his brother Theo, who says in a letter to a female acquaintance (T1a), "...so many fine things are written that one can hardly discuss, at least with ladies. Zola, Guy de Maupassant and others will go on belonging to the forbidden fruits for a long time to come." One wonders what he thought of Vincent's encouraging Wil to read exactly those books!"

The second postcard is a painting by a Scottish painter Alexander Mann (1853-1908), called 'Portrait of Helen Gow'. 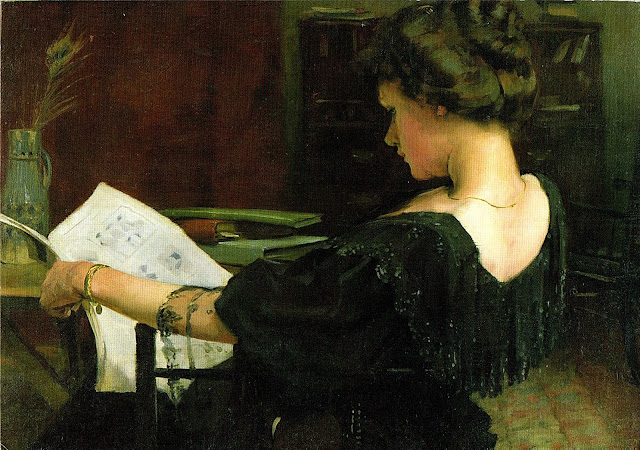 I've not been able to find out much about this painter, just a few lines in Wikipedia:

His travels also covered Europe and the Americas. A visit to Venice in 1884 was Alexander's first artistic venture beyond Britain and the immediate environs of Paris; this was followed by a voyage to the Caribbean and the Southern States of America, perhaps inspired by American artist friend in Paris. From 1890 to 1892 he lived with his family in Tangiers. Later he travelled to Madrid through Southern Spain in 1892 accompanied by John Lavery, another alumnus of the Académie Julian.

He recorded his visits and ideas for studio compositions in sketchbooks, using photography as well to assist his memory of a subject. In 1895 Mann's work was exhibited in London at the Barbican and in Dublin at the Hugh Lane Municipal Gallery of Modern Art. But he preferred to "live away from the haunts of other artists" because the relative prosperity which he owed to his family made it unnecessary to pay much attention to exhibition institutions, patrons and dealers.

He seemed well to do. Anyway, I like this painting a lot although I don't know how he can call it a portrait if her face is hardly visible....

Then there's the stamp: 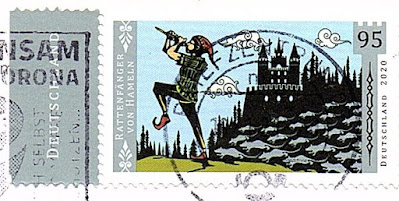 It features the Rat Catcher of Hameln. I grew up with this story but for those of you who live outside Europe, here is the plot (from Wikipedia):
In 1284, while the town of Hamelin was suffering from a rat infestation, a piper dressed in multicolored ("pied") clothing appeared, claiming to be a rat-catcher. He promised the mayor a solution to their problem with the rats. The mayor, in turn, promised to pay him for the removal of the rats (according to some versions of the story, the promised sum was 1,000 guilders). The piper accepted and played his pipe to lure the rats into the Weser River, where they all drowned.[4]

Despite the piper's success, the mayor reneged on his promise and refused to pay him the full sum (reputedly reduced to a sum of 50 guilders) even going so far as to blame the piper for bringing the rats himself in an extortion attempt. Enraged, the piper stormed out of the town, vowing to return later to take revenge. On Saint John and Paul's day, while the adults were in church, the piper returned dressed in green like a hunter and playing his pipe. In so doing, he attracted the town's children. One hundred and thirty children followed him out of town and into a cave and were never seen again. Depending on the version, at most three children remained behind: one was lame and could not follow quickly enough, the second was deaf and therefore could not hear the music, and the last was blind and therefore unable to see where he was going. These three informed the villagers of what had happened when they came out from church.[4]

The earliest known record of this story is from the town of Hamelin itself, depicted in a stained glass window created for the church of Hamelin, which dates to around 1300. Although the church was destroyed in 1660, several written accounts of the tale have survived.

This window is generally considered to have been created in memory of a tragic historical event for the town. Also, Hamelin town records apparently start with this event. The earliest written record is from the town chronicles in an entry from 1384 which reportedly states: "It is 100 years since our children left."

Well, that was Hamelin. What has been happening here with me? I'm still home alone, as hubby is still in hospital. I miss him terribly, although I can manage fine on my own. I just miss him to be around. We chat several times a day on FaceTime, but he ran out of data over the weekend, so we were talking over the phone, old fashionedly. Since yesterday he has been able to buy another 35 Gb.
He told me he had gone (By ambulance) to Granada for a scan. 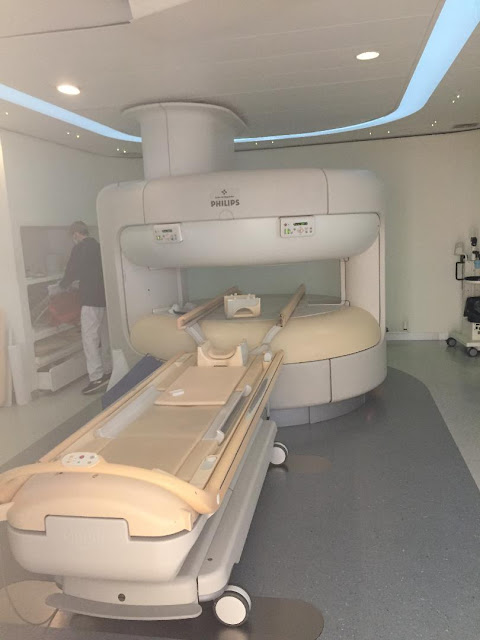 Looking at the machine, it looks like an MRI scan. Hubby calls it a space portal (He's into science fiction).
We have now got a date for surgery: Friday 26th at 9 am. In the meantime he is not given much to eat. (As they will be taking away part of his colon). Some clear broth and Ensures (meal replacing drinks): 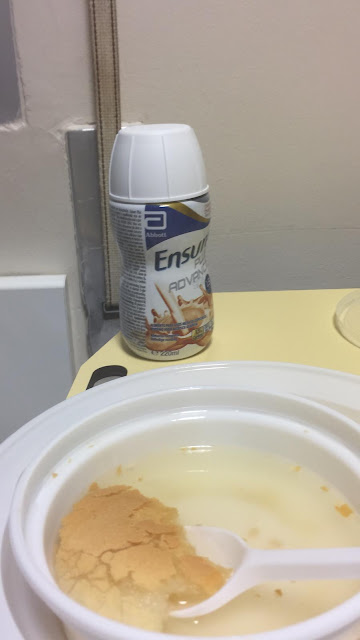 His room mate took pity on him and gave him his bread roll. (Not really allowed).
The next photo gives me much pleasure. My amaryllis has now finished flowering and is growing a second shoot! How wonderful is that! 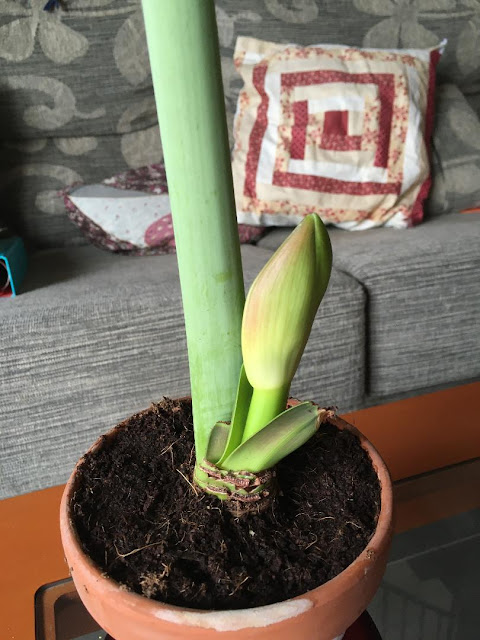 I'm still knitting. I am on my second pair of socks for hubby. I ordered some bamboo circular needles as I saw ladies in many instruction videos use these bamboo needles: 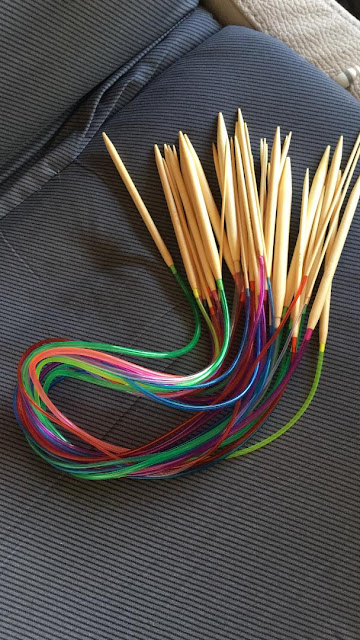 But they were not a success. I was using the smaller/thinner ones as I am knitting socks. (2.5mm), but the plastic cord wouldn't move back inside the stitches as that cord was just as thick as the needle and it just didn't work. I am a bit disappointed. They are probably OK with thicker yarns. Has anyone have any experience with these type of needles?
I have done a lot of walking this week. A few times I have gone out with my friend. We walk and then sit down somewhere and pray. 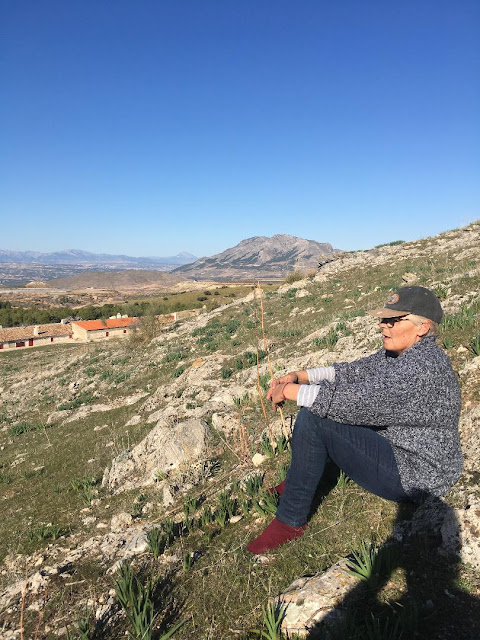 What a privilege to have a praying friend!
The almond trees are in blossom and that is always spectacular. 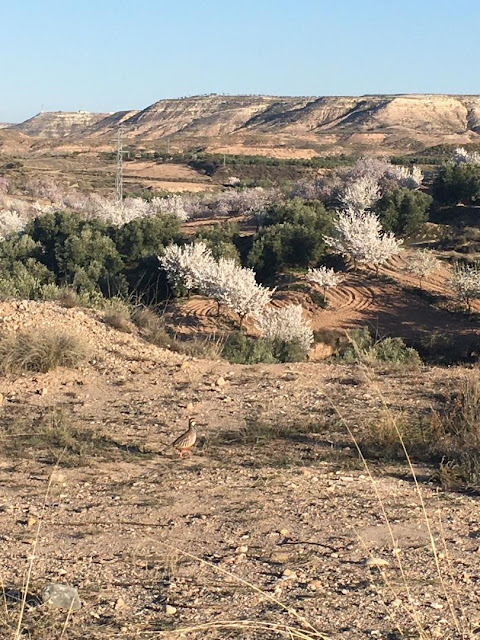 Did you spot the partridge in the above picture? 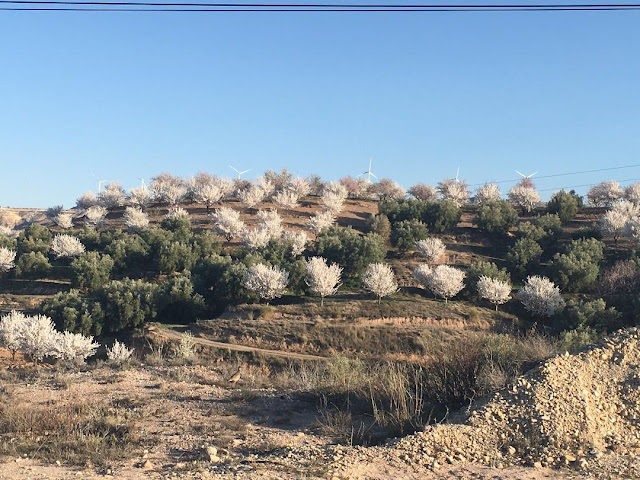 Some trees have pink blossom and some white. These seem to be all white. 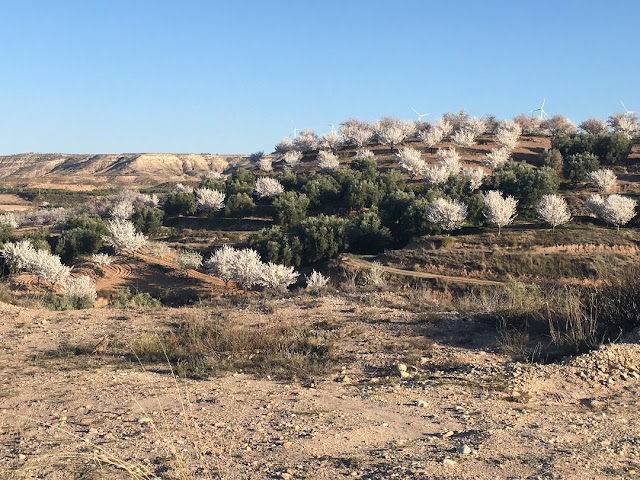 The older trees flower first I have been told. 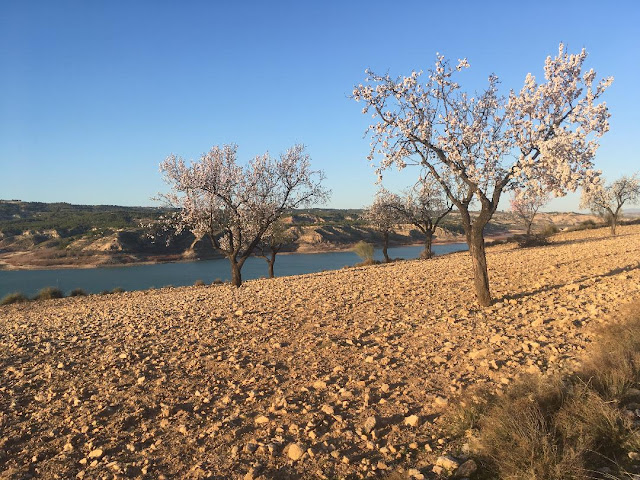 The reservoir is very low. We have had a drought for many years now. We saw this sign for a 'trail', and have made a mental note to do this one one day. 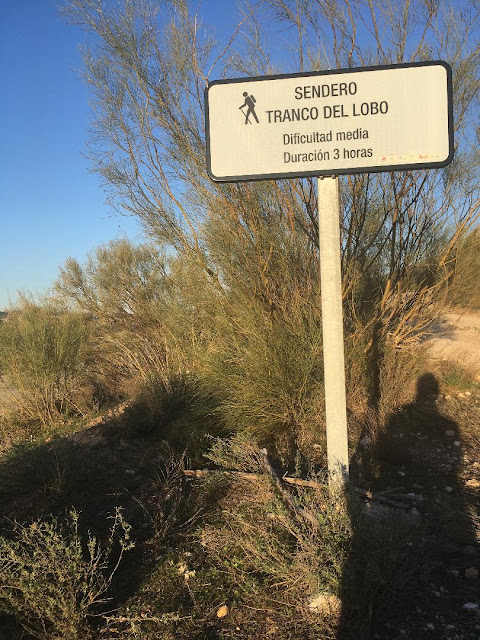 Close up of the blossom in all their glory. 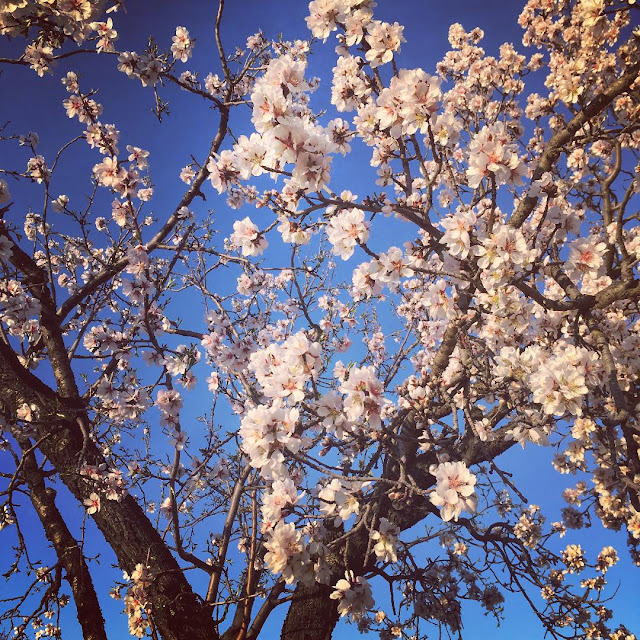 As today is T for Tuesday, I want to add a qualifier. I do cook for myself and the other day I had some cooked chicken breast with a very spicy spice rub. I decided to make tortillas. I had some home made tortilla dough in the freezer, but it came out all crumbly when defrosted. I then had to go the the corner shop and buy some ready made. They are wheat tortillas, not corn, but they were nice nevertheless. 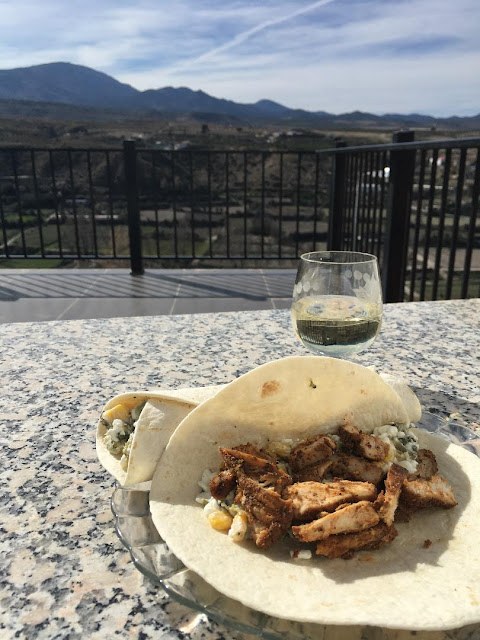 That was a bit about my week. I wish everyone a great T-Day! (There will be all sorts of drinks and drink references, so I'll have to be careful not to drink too much)
Stay safe,
Hugs,
Lisca