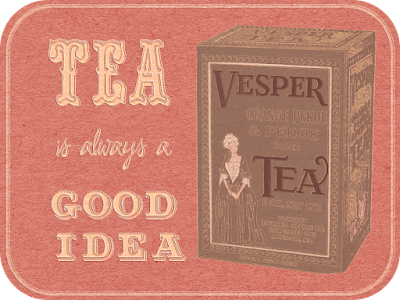 Good morning ladies, it's time to join Elizabeth and Bleubeard's T-Party. I'm inviting you to some vintage tea here. It makes a change from coffee.

Our restrictions have been relaxed a bit and we can now go out a bit more. Older people still only at certain hours (unfortunately we come under 'older'). But I managed to go to Baza on my own the other day and my errand took me through the park. 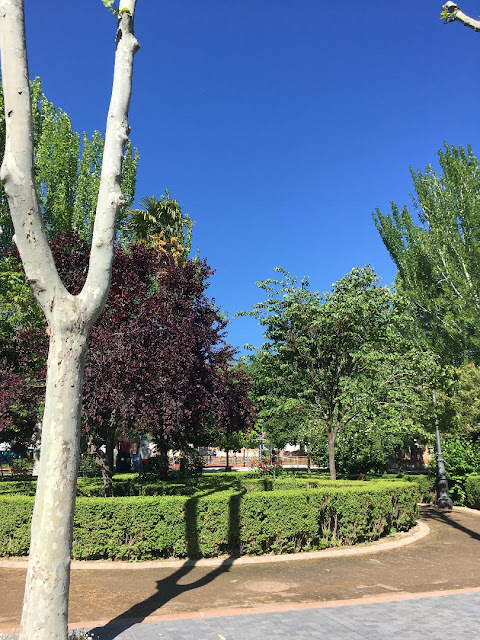 The park was deserted. So weird. It is usually very busy with older people chatting on benches and children playing. 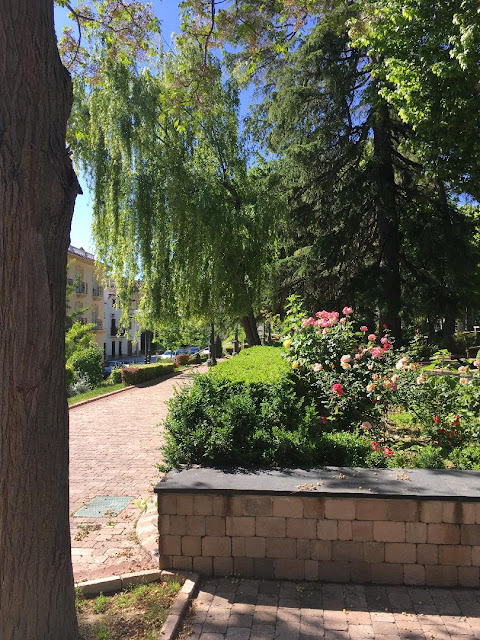 There are flowers and the park looks well maintained in spite of the lockdown. 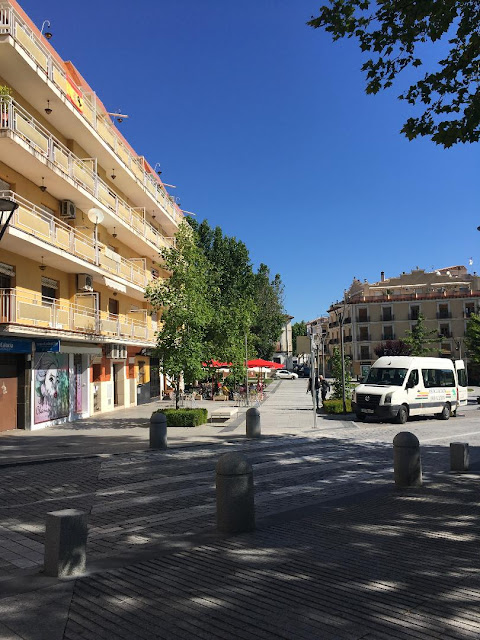 In this photo you can see that people were sitting outside having coffee. I think the tables should be further apart, having read the rules, but who am I.... 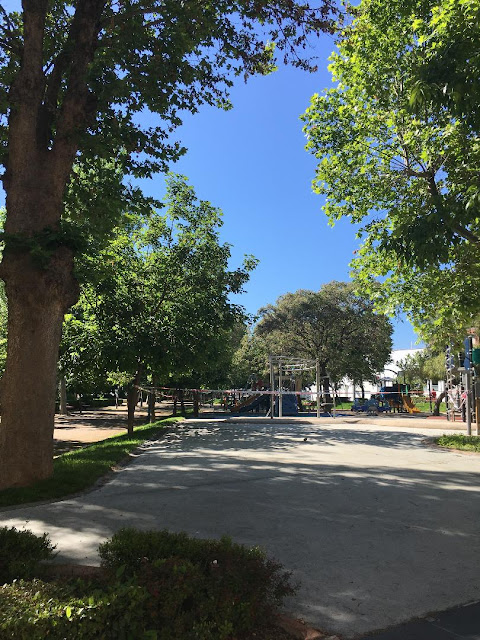 This is a sad sight: The children's playground cordonned off. 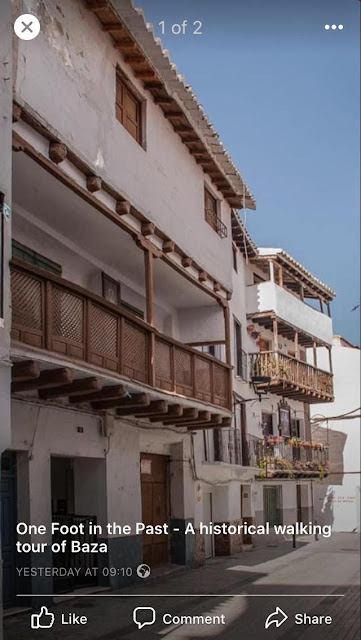 Our little town of Baza is nothing special but there are many old houses. Here are some that appeared on my phone. 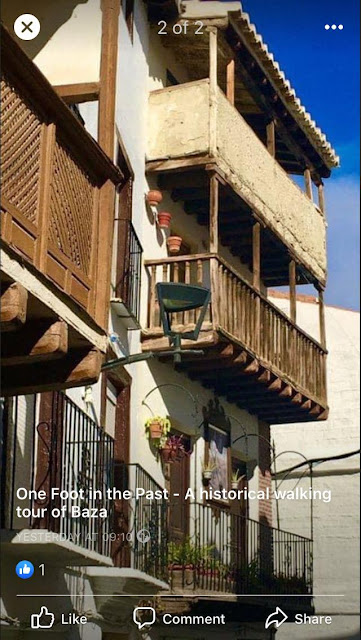 Lets not forget my postcards!  I received this one from Russia. It was sent to me by Lena who lives in Nizhniy Tagil,  located 25 kilometers (16 mi) east of the virtual border between Europe and Asia. Population: 361,811 (2010 Census); 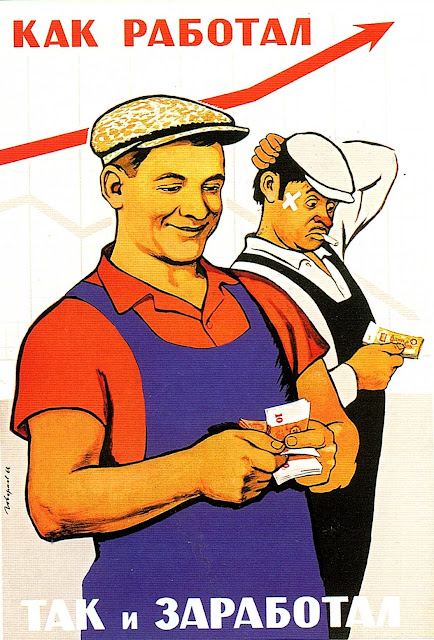 The poster image on the card is from 1964 (the Soviet era) and is entitled 'As you work, so you must earn' by Victor Govorkov. 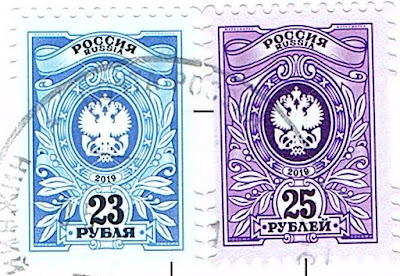 And the stamps are the regular Russian stamps, but I like them. They are so pretty.

The next card is an artistic nude. I think it is a photo that has been photoshopped. But nevertheless, it's very beautiful.
It comes to me from the Ukraine, from a Black Sea resort called Odessa. 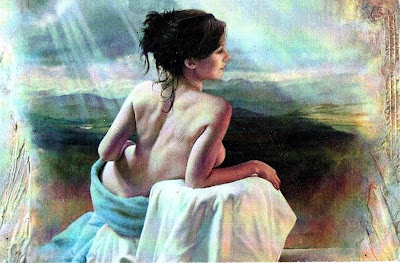 The stamps are really spectacular!
The one on the left celebrated the 1000th Anniversary Since the Reign of Yaroslav the Wise, 978-1054.
The middle stamps is entitled Before The Rain by Maksim Kisiliyov.

The stamp on the right is all about an epic film called The Rising hawk. I found this information about it:
The historical action movie of Ukrainian filmmaker Akhtem Seitablayev 'Zakhar Berkut' (The Rising Hawk) will be released on October 10, 2019. 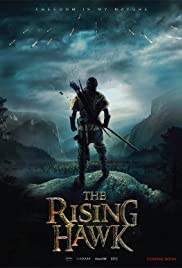 According to movies’ story, the Mongol horde, headed by the Khan Burundai, moves to the west, destroying everything in its path. Having reached the high Carpathian Mountains, the army stops at the foot. However, at night, several local hunters - the Berkut's brothers - secretly climb into the camp and release prisoners. Driven by fury Khan decides to revenge and destroy the Carpathian settlements. For this, he finds a traitor among the locals, who reveals a secret passage in the mountains. However, a small community of mountain hunters under the leadership of 'Zakhar Berkut', have the plan how to stop a numerous enemy forever.
The big international actor's team from Ukraine, the United States, Kazakhstan, Great Britain and Mongolia will play part in Zakhar Berkut movie. The original story was created by Ivan Franko, the 19th-century poet and prosaic from western Ukraine.
The stamp below is a mystery to me. I have looked through the catalogue all the way back to 2010 and haven't found it, so it must be older than that.

The last stamp was issued in 2012 and is from an ongoing series of trees and plants.

That is it from me for today. I wish everyone a very happy T-Day and... 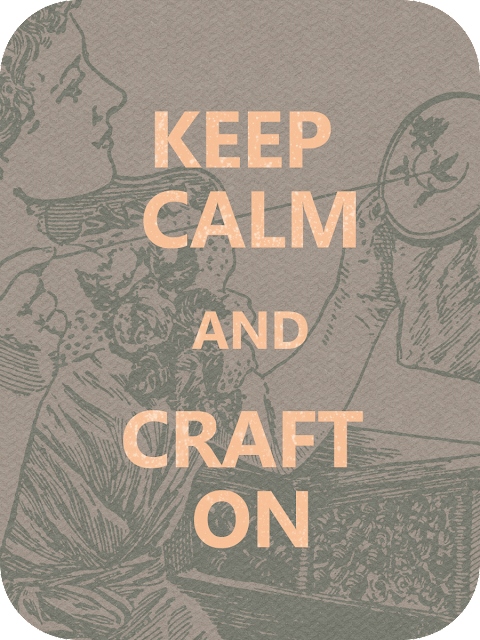