I'm linking up with Elizabeth at T for Tuesday. Why don't you join us? Anything tea related or even drink related is most welcome.

My hobby is Postcrossing, (send a postcard and receive a postcard from a random person in the world), I have a large collection of beautiful postcards. Today I would like to show you this one: 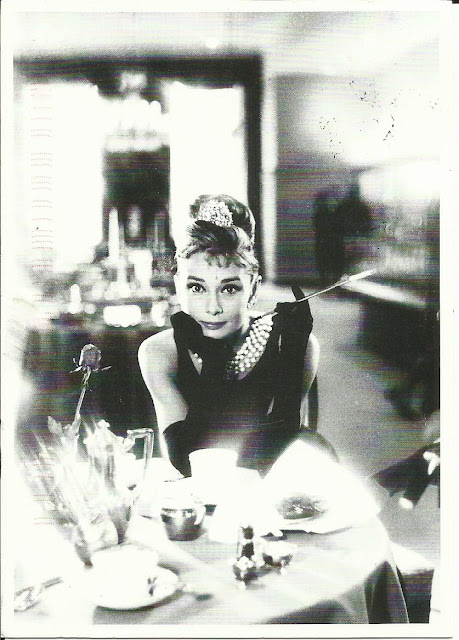 It's the lovely actress Audrey Hepburn in the film Breakfast at Tiffany's.

Audrey Hepburn (born Audrey Kathleen Ruston; 4 May 1929 – 20 January 1993) was a British actress and humanitarian. Recognised as a film and fashion icon, Hepburn was active during Hollywood’s golden age.  She was ranked by the American Film Institute as the third greatest female screen legend in Golden Age Hollywood  and was inducted into the International Best Dressed List Hall of Fame. Born in Ixelles, a district of Brussels, Hepburn spent her childhood between Belgium, England, and the Netherlands, including German-occupied Arnhem during the Second World War where she worked as a courier for the Dutch resistance and assisted with fundraising. In Amsterdam, she studied ballet with Sonia Gaskell before moving to London in 1948 to continue her ballet training with Marie Rambert and perform as a chorus girl in West End musical theatre productions. She spoke several languages, including English, French, Dutch, Italian, Spanish, and German.

Being Dutch myself and having seen many of her films when I was young, I have always been a fan of Audrey Hepburn. In later life she was a goodwill ambassador for UNICEF (United nations Children's Fund). A remarkable lady. Read about her war years in occupied Holland if you are interested (Wikipedia). Her story is similar to that of my mother.

As we are in Dutch mode I would like to share what my friend Antonia brought me from Holland: 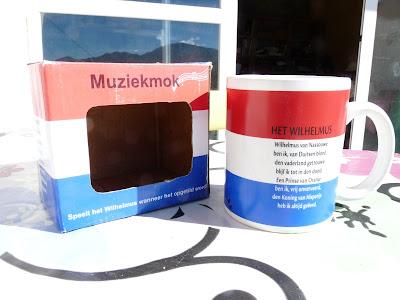 A mug with the Dutch national anthem on it. The anthem is called 'Het Wilhelmus'. The mug plays the song when raised.
Antonia went to Holland to attend the wedding of her daughter to a Dutchman. He comes from a place called Staphorst. Here you see my friend Antonia with the bridegroom's grandmother in national costume: 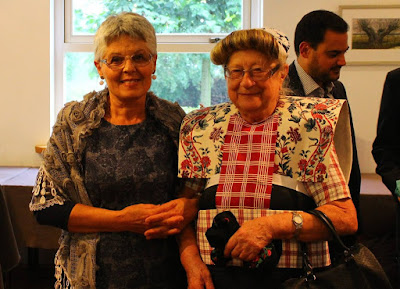 In yesterday's blog I wrote about a card I received from Michigan, I described the stamps. I forgot this one: The Toleware coffeepot. I didn't 'forget' on purpose but as it is T for Tuesday I might as well add it here: 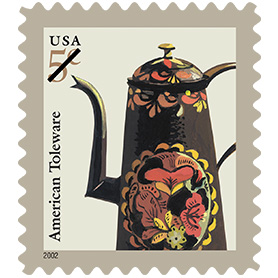 This stamp features the image of a painted toleware coffeepot from the Winterthur Museum in Delaware. Toleware refers to items and object made of tin that are japanned or lacquered, and adorned with a picture or design. Developing in the early 18th century, this technique spread across Europe and America, and flourished until the end of the 19th century. Also known as tôle peinte, (French for painted sheet iron), painted tin, or simply tole, the technique was applied to a variety of household things - from humble utilitarian household goods to decorative fixtures - and in a range of styles.

That's it from me for today. Have a fantastic Tuesday!