It's Map Monday and today I have a postcard from the Netherlands, which, as many of you know is my home country. 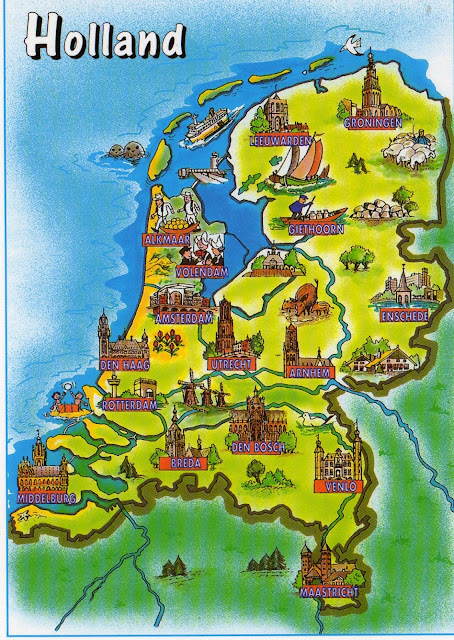 I was born in Rotterdam, which is middle left on the map. The three main cities (Amsterdam, Rotterdam and the Hague) have grown so much towards each other and Utrecht, that it has become a huge urban area they call Randstad, which means 'Edge city'.

Most towns on the map have a little picture depicting what they are famous for. Alkmaar is famous for its cheeses, and Volendam is a touris attraction with national costumes. In the North, under Leeuwarden you can see sail boats as this area (Friesland) has a lot of lakes and people sail a lot. East of Rotterdam you can see some windmills. That is called Kinderdijk (look it upon Google and marvel at the lovely windmills). West of Rotterdam are some fantastic beaches. Yes, the Netherlands is small, but a lovely country, well worth a visit (plug, plug, lol). 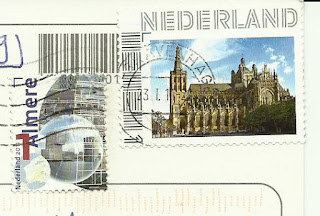 The stamps on this card are lovely. I had never seen them. The one on the right is the St Janskathedraal (Cathedral of St John) in 's-Hertogenbosch. A stamp from 2011.

The cathedral church of St John is the height of gothic architecture in the Netherlands. It has an extensive and richly decorated interior, and serves as the cathedral for the bishopric of 's-Hertogenbosch. The cathedral has a total length of 115m (377ft), and a width of 62m (203ft).Its tower reaches 73m (240ft) high, the largest catholic church in the Netherlands.
St John Cathedral is a so-called 'kanjermonument' (whopper-monument, loosely translated) and as such receives financial support from the Dutch government.

The stamp on the left is depicting the city of Almere, which is a newly built city on newly claimed land. 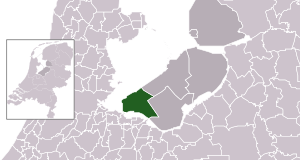 The Dutch put dykes around a stretch of water, then pump out the water and over the years let the ground dry and eventually build on it.
Almere is the newest city in the Netherlands: the land on which Almere sits, the southern Flevopolder, was reclaimed from the IJselmeer 1959-1968. The first house was finished in 1976. Almere became a municipality in 1984. In 2014 it had 196,290 inhabitants.

That's it from me today. Enjoy your day,
See you tomorrow when I link up with T for Tuesday.
Blessings,
Lisca
Posted by Lisca at 08:34