Brrr! It's suddely cold here in Spain. Temperatures in single figures (C) for the first time this autumn! But the sun is shining so I'm not complaining.

As it is Sunday to day, I'm showing you a postcard of a religious building as usual and I'm also linking up with InSPIRED Sunday. This meme shares beautiful images of places of worship. Do have a look if you can.

My postcard today comes from Romania: 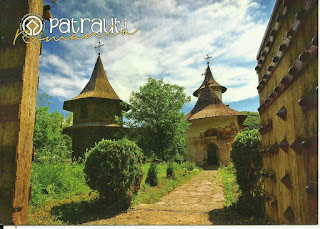 It is the Sacred Cross Church in Patrauti.

Built in 1487 and dedicated to the Holy Cross, the monastery at Patrauti is the oldest surviving religious site founded by Stephen the Great. Mural paintings, dating from around 1550, can still be admired on the west façade.  In 1775, soon after Bucovina was annexed to the Habsburg Empire, the monastery was turned into a parish church. Today, only the church and a wooden bell tower are still standing from the original monastic complex.

It was sent to me by Livia, who tells me that this site is part of UNESCO's World Heritage sites.

I looked it up on the internet and found an image of the frescoes inside the tower: 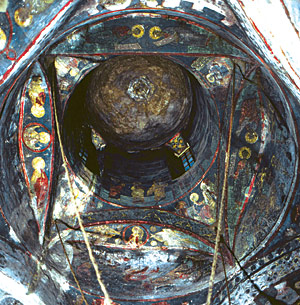 The site (bestofromania.eu) gives the following information:
The Monastery has wholly preserved its original murals. Some paintings inside the church were realized immediately after the church’s construction, while others were painted later in Byzantine style. These were not restored and are very dark and covered with dust and soot from candles, but what is visible is dominated by golden light. They are the work of an accomplished artist, many of the saintly faces seem actual portraits. It is believed that some artists came from the Byzantine Empire which had been conquered by the Turks only a few decades before, or had been trained in the Byzantine style of painting.

Livia decorated her card with tulips and stickers. She calligraphed my name too. The washi tape in the middle is about Paris, which i thought was appropriate now when we are all thinking of Paris and what happened there. 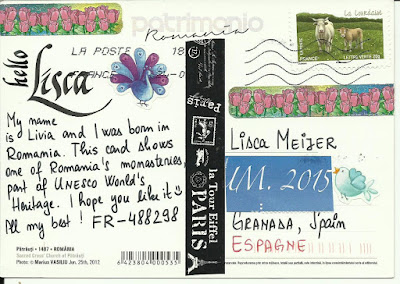 The stamp is french as Livia now lives in France. 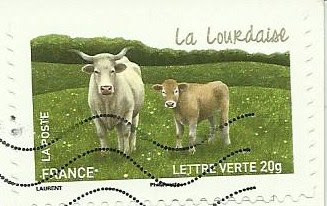 I found it interesting reading about the cows on the stamp. They are called Lourdaise and come from the Pyrenees. They are renowned for their rich milk which is ideal for butter making. In 1979 there were only 12 cows and one bull left. This has increased steadily over the years and now there are more than 200 bulls!

That's it for today. See you tomorrow with a map card on Map Monday.