Here we are at the end of the week. It has been a busy week for us, and for you? I will mention a few things that made me smile later on as this is what this blog is about. But first let me share a postcard that I have received recently: 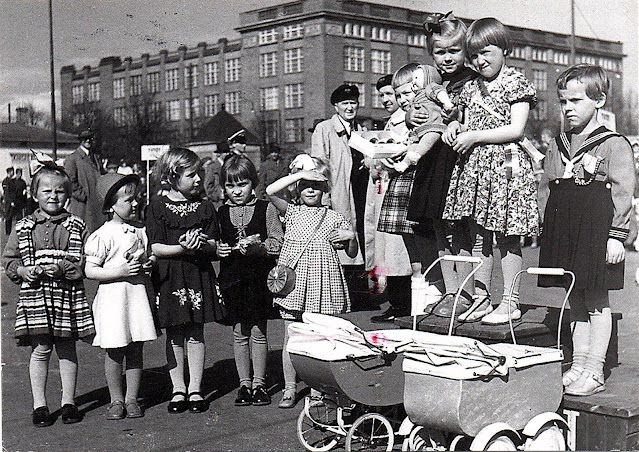 What a great photo! It brings back memories for me as it could have been me in the picture. The picture was taken in the early fifties in Tampere, Finland. It was a pram race organized by the Tampere Newspaper Association. The card was sent to me by Mia, who lives with her elderly mother. She mentions that she is a born-again Christian (just like me).
The stamp is very pretty and colorful, but I have no idea what it is about. 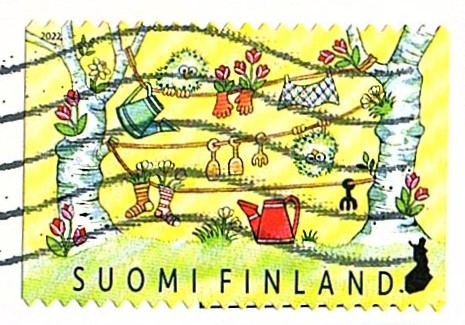 I've not been able to find it on the internet.
Earlier this week, my Danish friend and I went to see an exhibition in Baza, our nearest town. 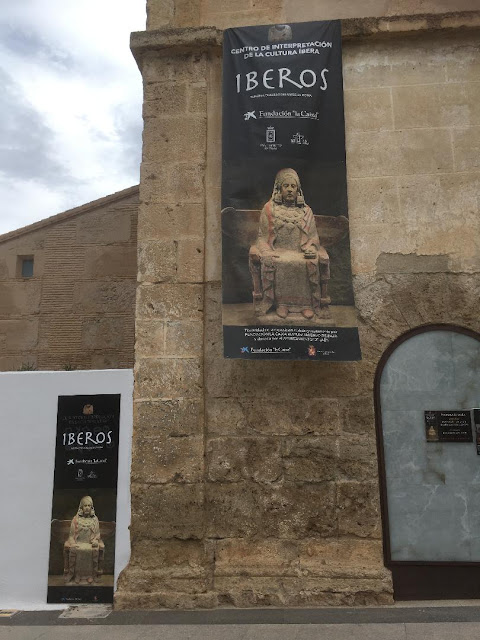 It was all about the Iberos, a people that inhabited this area before the Romans.
The figure on the poster of the seated lady is called La Dama de Baza (The Lady of Baza), and was found during an excavation of a burial chamber. 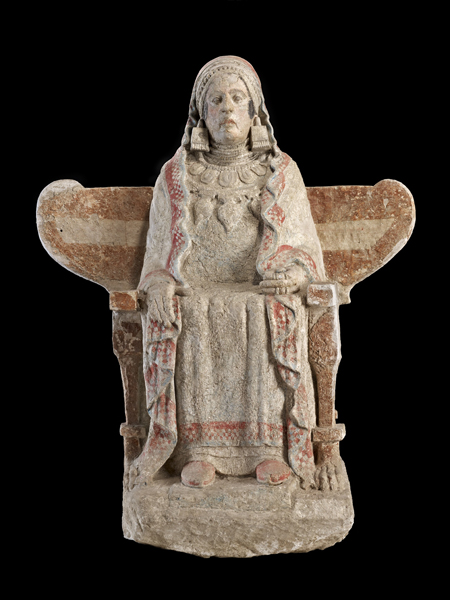 Wikipedia says this:
The Lady of Baza (la Dama de Baza) is a famous example of Iberian sculpture by the Bastetani. It is a limestone female figure with traces of painted detail in a stuccoed surface that was found on July 22, 1971, by Francisco José Presedo Velo, at Baza, in the Altiplano de Granada, the high tableland in the northeast of the province of Granada. The town of Baza was the site of the Ibero-Roman city of Basti and, in one of its two necropoleis, the Cerro del Santuario, the Lady of Baza was recovered. She is seated in an armchair, and an open space on the side is thought to have contained ashes from a cremation.
The original statue is in a museum in Madrid, but we saw a replica at the exhibition. 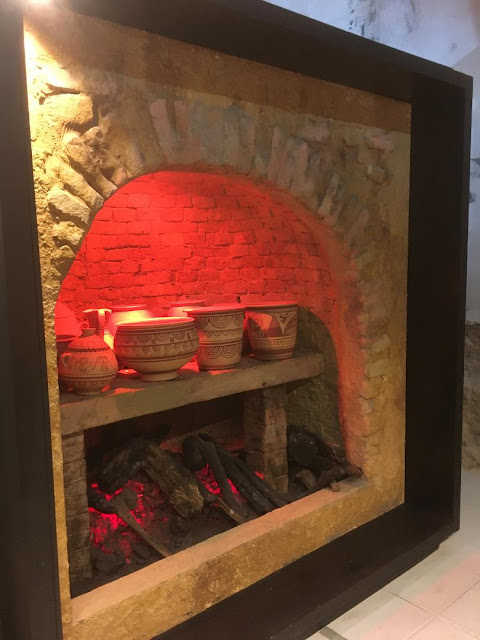 The exhibition showed how the people of those days (bronze age) lived and what artifacts they would have used. The building they used looks like a church badly in need of restauration. 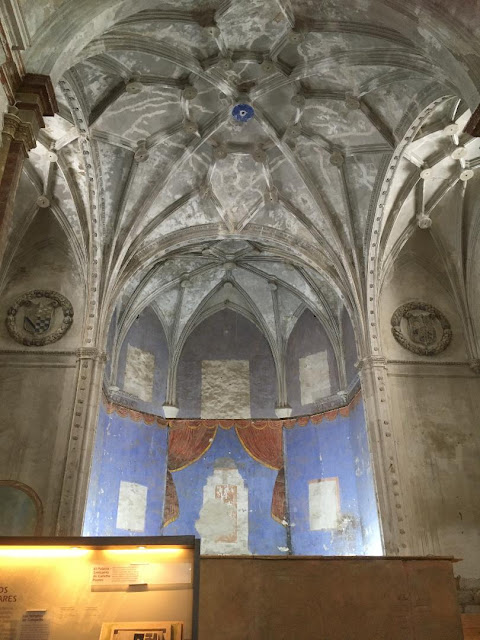 I'm afraid I did not take many photos as we were busy reading all the information. It was really interesting. 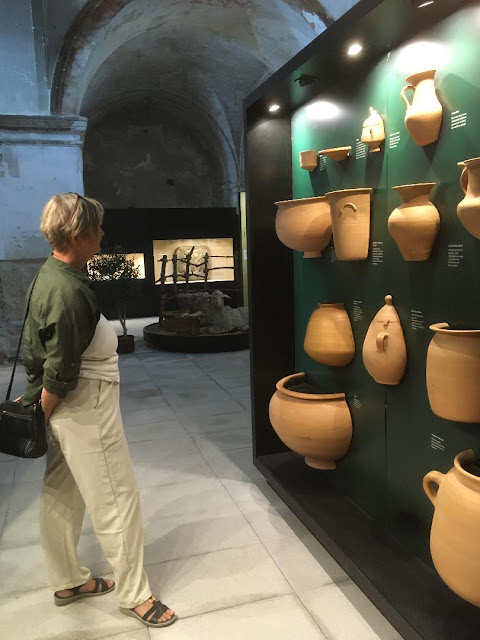 Another thing that made me smile is our little harvest: 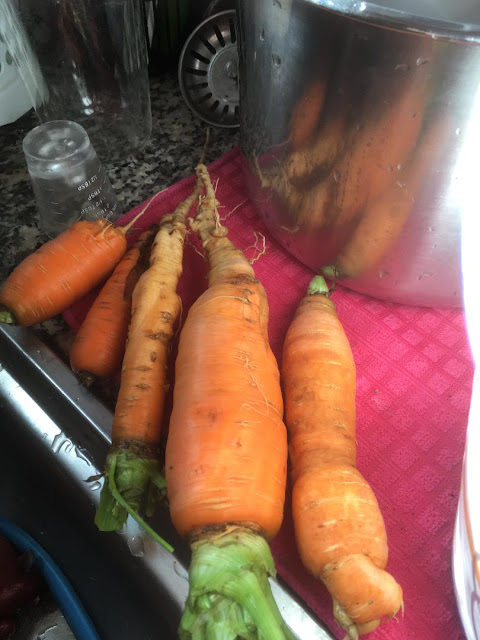 We harvested five ugly carrots and some red potatoes. 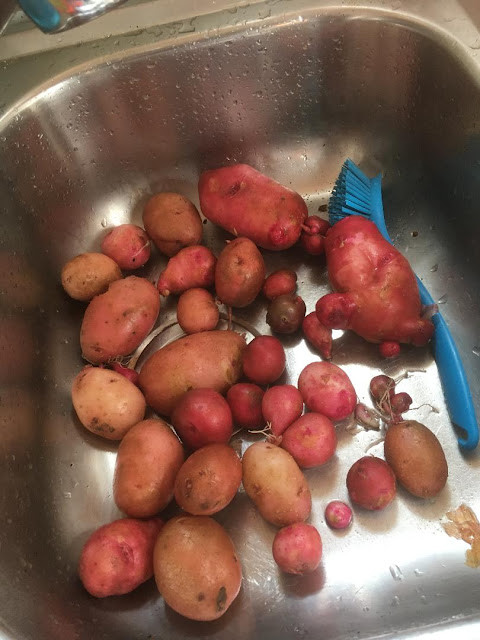 Something is better than nothing. We also harvested five bags of green apples! So I have already made two apple cakes.
At the moment my friend from the Netherlands has come to visit with her partner and her dog. They come every year as they play a bridge drive in Portugal this time every year. On their way they always stop by for a few days. We have been friends since 1971! 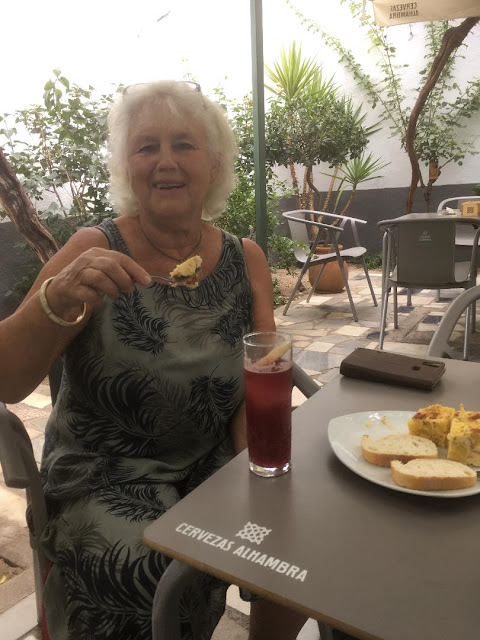 And this is her lovely dog Roxanne:

In the background my hubby doing something on his laptop. The dog loves to lie on the rug, and I don't blame her. My house is tiled throughout, as is the way in a hot country.
Hubby is doing a bit better. No more fever. But the blood tests we did the other day have revealed that he is anemic, so today he is having a blood transfusion and some follow-up appointments have been made for two scans and some chemo in October.
That is it from me today. As per usual I will show you some funnies (and 'thinkies') at the end.
In the mean time I will check in at Annie's A Stitch In Time and I hope to see you there.
Hugs,
Keep smiling,
Lisca 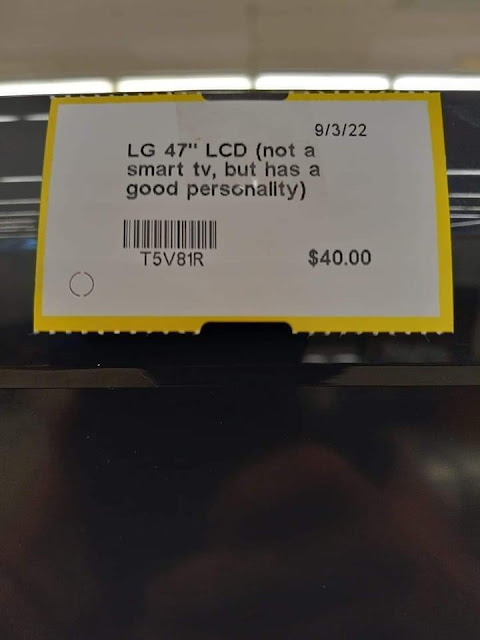 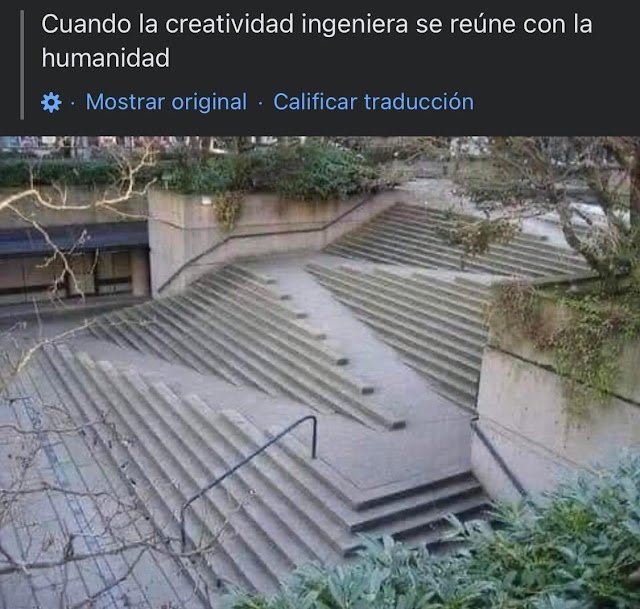 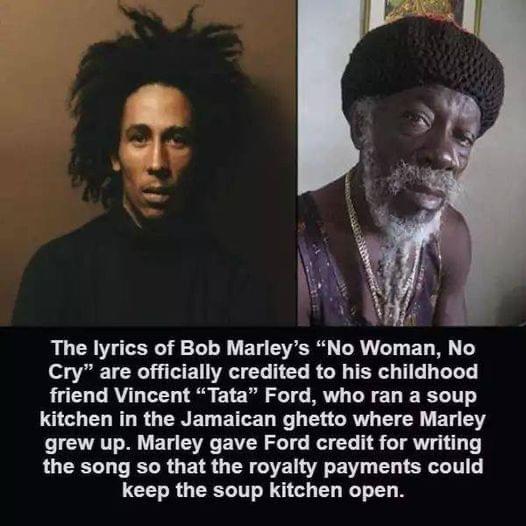 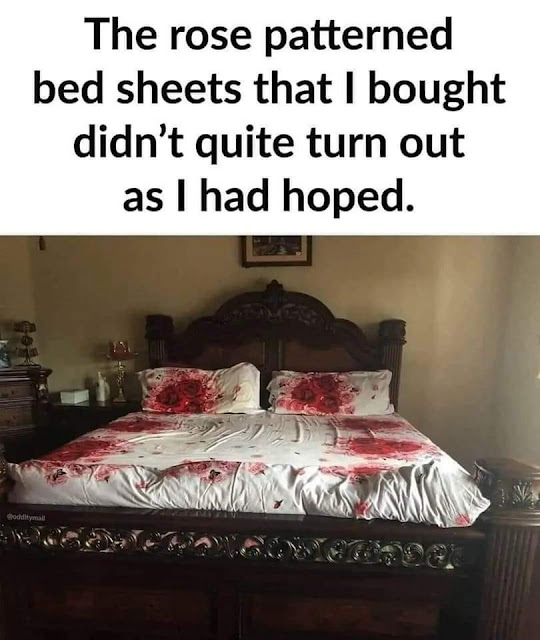 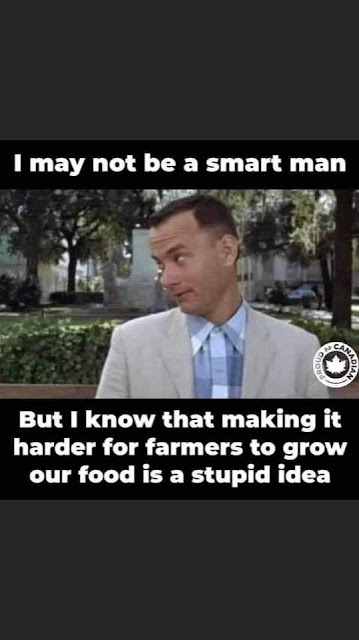 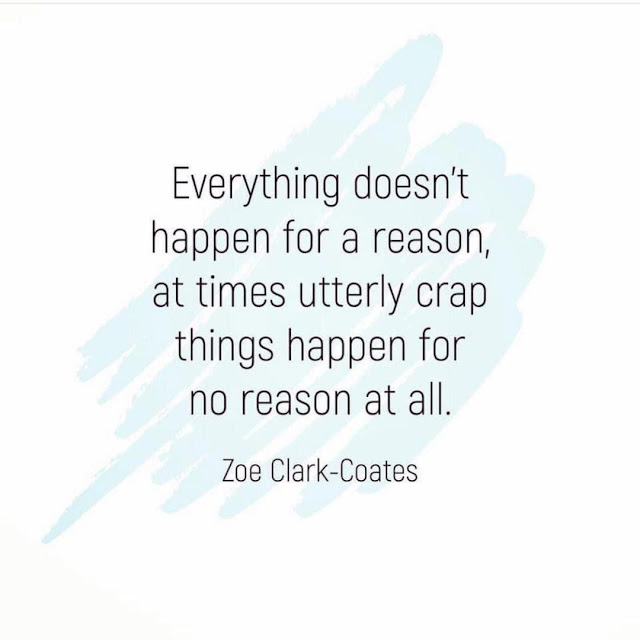 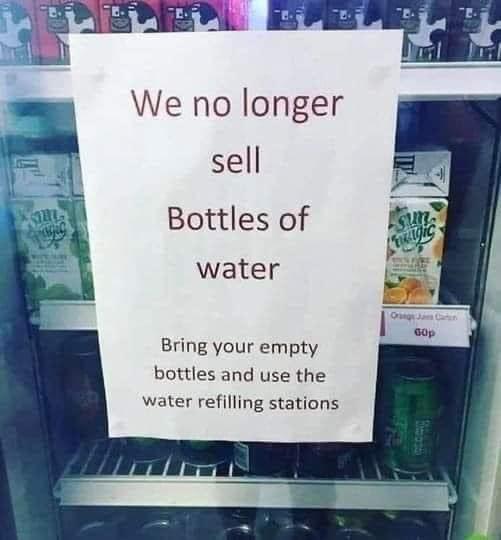 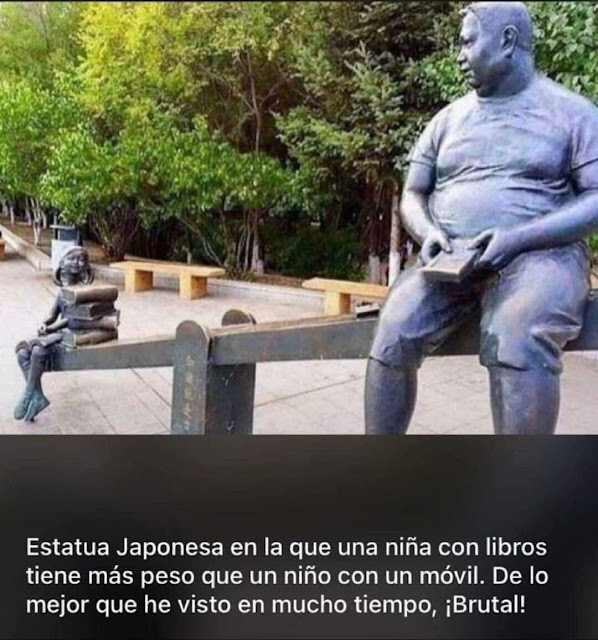 Translation: Japanese statue in which a girl with books has more weight than a boy with a mobile.  The best I've seen in a long time.  Brutal! 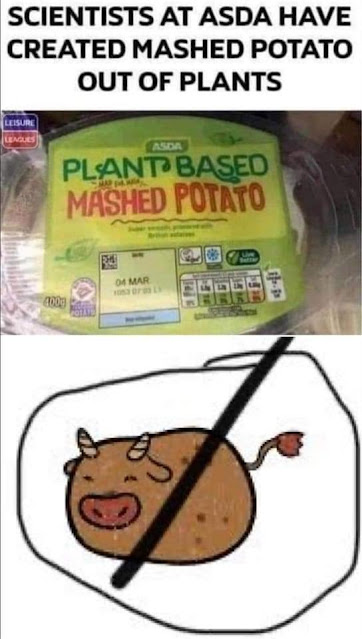 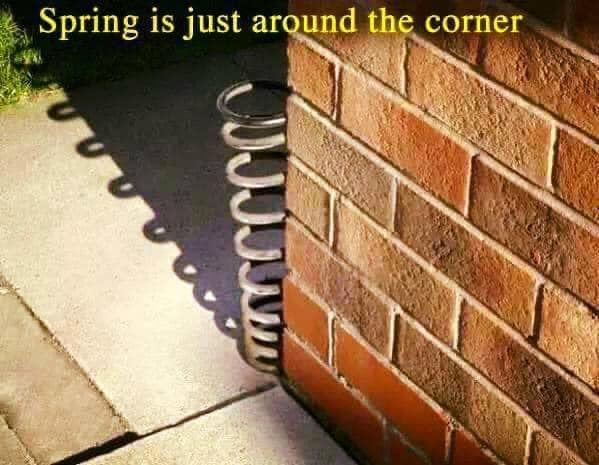 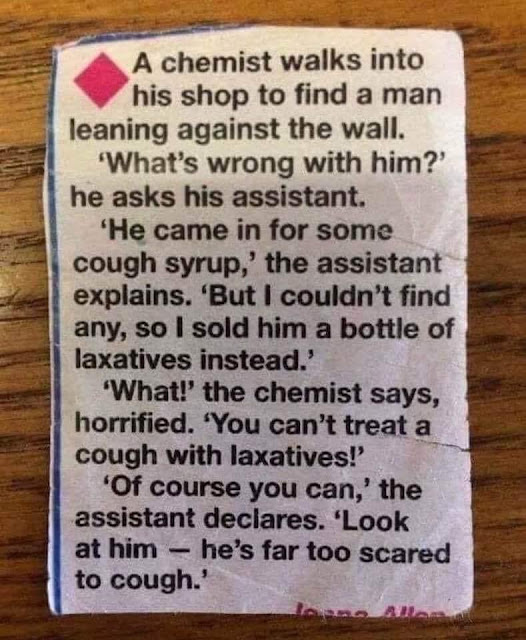 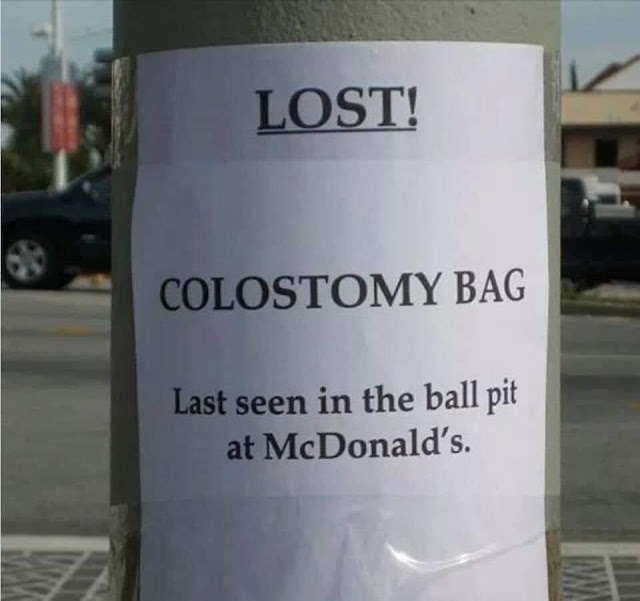