Hello lovely ladies,
Are you sitting comfortably? I've got some nice stuff to show you, and then of course there is the T-Party hosted by Elizabeth and Bleubeard.
But first, let me show you a postcard I received in March. It comes from Germany and features the Clemenswerth castle. 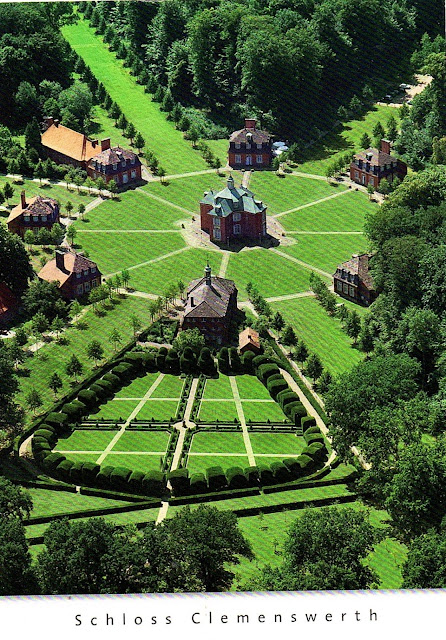 Wikipedia writes: Clemenswerth Castle is a baroque hunting lodge, with a central pavilion surrounded by eight smaller lodges for guests,  It is the only remaining star-shaped hunting complex in the world.  The graceful 18th century buildings unite art and nature to create a wonderful experience. 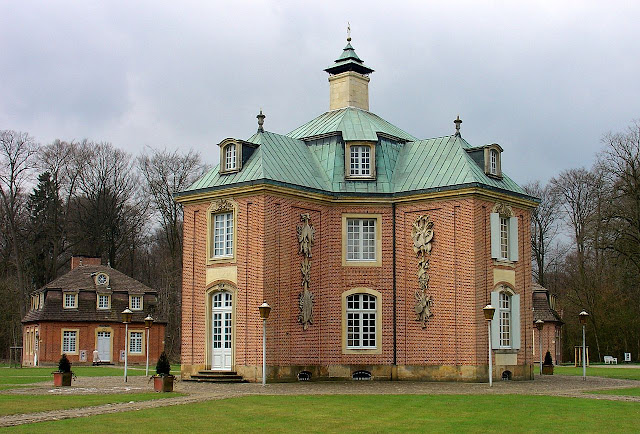 Clemenswerth was built in Sögel between 1737 and 1747 according to plans from the reputed baroque architect Johann Conrad Schlaun. 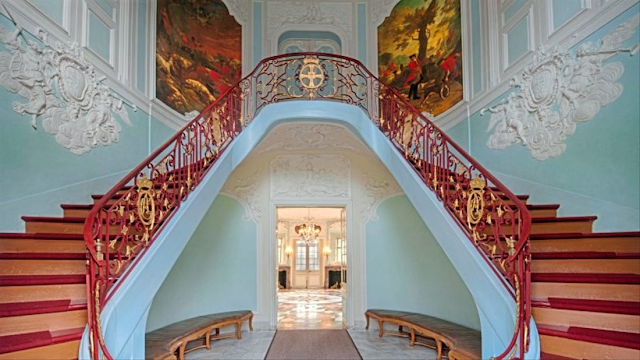 The museum has a wide range of fascinating exhibits, including pieces inspired by Baroque hunting, fine porcelain, and faience ware from Strasbourg. 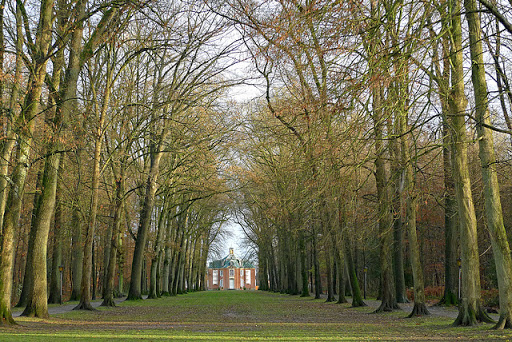 Elector and Archbishop of Cologne, Clemens August of Bavaria, who came from the house of Wittelsbach, was the man responsible for the construction of the building. August was also called "Lord of the Five Churches" because he also owned the episcopal chairs of Paderborn, Münster, Hildesheim and Osnabrück. 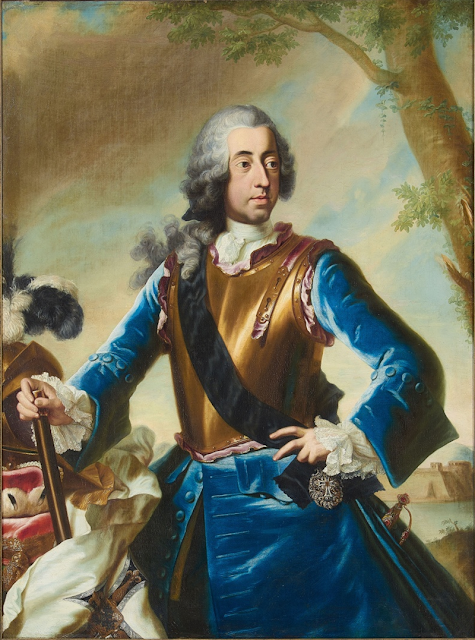 According to Jan Swafford, Clemens August did not owe his position of power to his "talent, intelligence or reason. In each of his exalted posts, Clemens August was splendidly brainless and incompetent, not in the least interested in governing anything. As Elector in Bonn, his attention would be given largely to pleasure in the form of ladies, music, dancing, and erecting monuments to his glory and munificence." (2014) 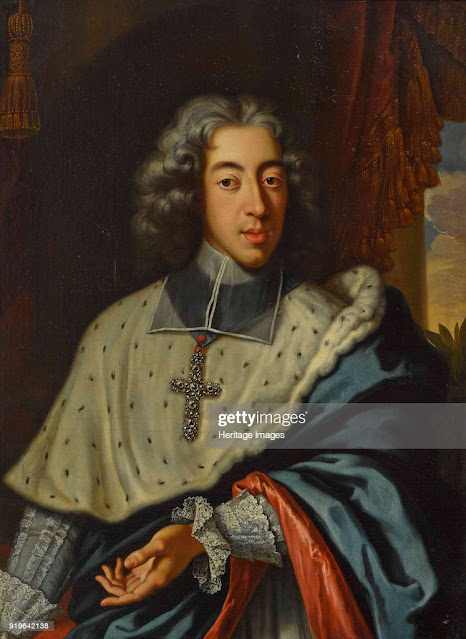 The stamp is beautiful and depicts Lorelei.
Wikipedia also writes about Lorelei: In 1801, German author Clemens Brentano composed a ballad.  It first told the story of an enchanting female associated with the rock. In the poem, the beautiful Lore Lay, betrayed by her sweetheart, is accused of bewitching men and causing their death. Rather than sentence her to death, the bishop consigns her to a nunnery. On the way thereto, accompanied by three knights, she comes to the Lorelei rock. She asks permission to climb it and view the Rhine once again. She does so, and, thinking that she sees her love in the Rhine, falls to her death; the rock still retained an echo of her name afterwards.

In 1824, Heinrich Heine seized on and adapted Brentano's theme in one of his most famous poems, "Die Lorelei". It describes the eponymous female as a sort of siren who, sitting on the cliff above the Rhine and combing her golden hair, unwittingly distracted shipmen with her beauty and song, causing them to crash on the rocks. In 1837 Heine's lyrics were set to music by Friedrich Silcher in the art song "Lorelei" that became well known in German-speaking lands. A setting by Franz Liszt was also favored and dozens of other musicians have set the poem to music. During the Nazi regime and World War II, Heinrich Heine (born as a Jew) became discredited as author of the lyrics, in an effort to dismiss and hide Jewish contribution to German art.
Here is a better picture of the stamp: 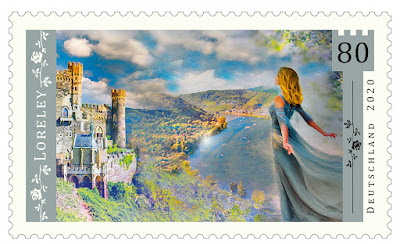 At the moment my whole body is aching and my legs are stiff! What happened? I went on a hike! I joined a group from our village, but it was a tad harder than we expected.
We went to Atarfe, near Granada city, which is a little over an hour by coach. We were welcomed by the Atarfe walking club and we were assigned a guide and given some merchandise. 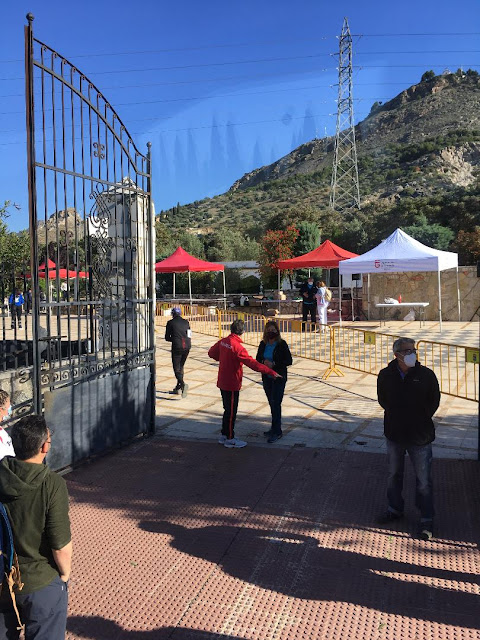 To start with we had to climb this hill! 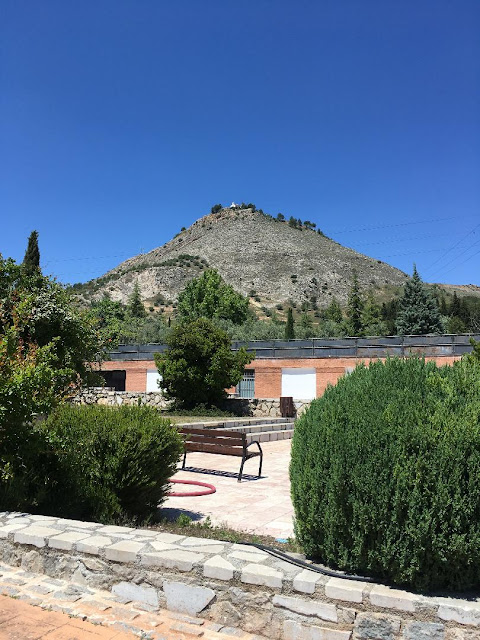 There was a lovely view from the top. 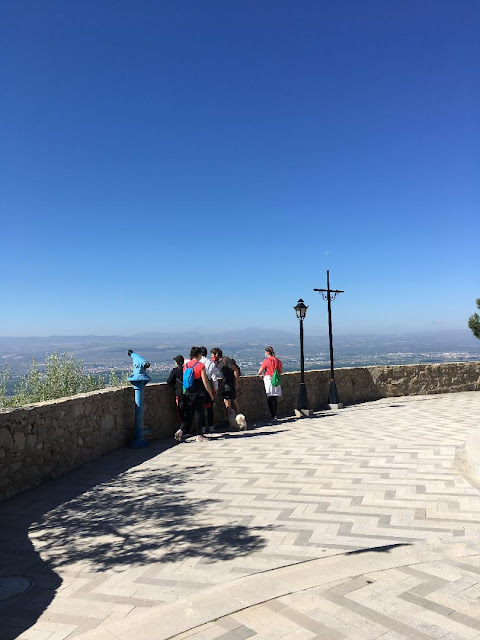 And there was a hermitage called Tres Juanes (Three Johns) 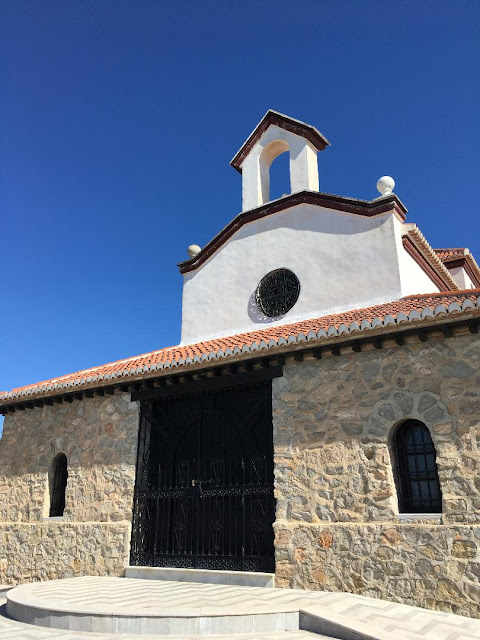 The hike was very varied, as we sometimes walked in the forest 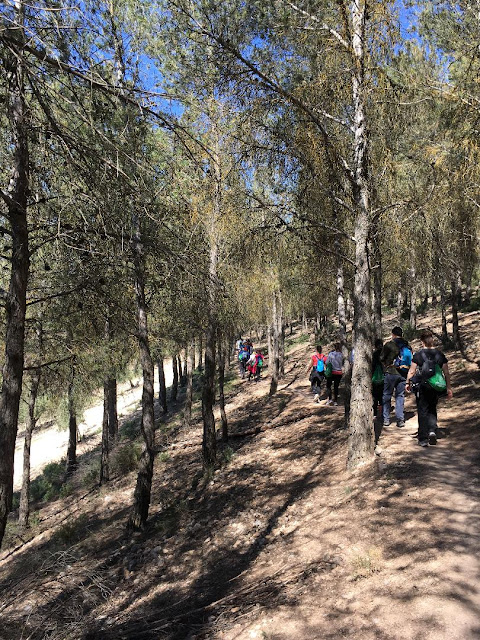 and sometimes out in the open. 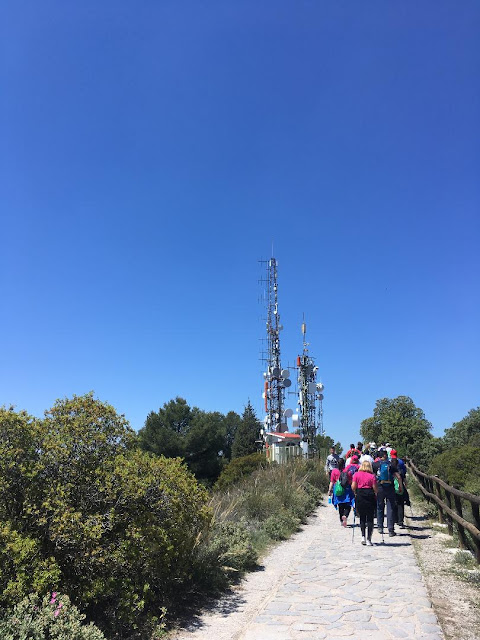 Sometimes the paths were good. 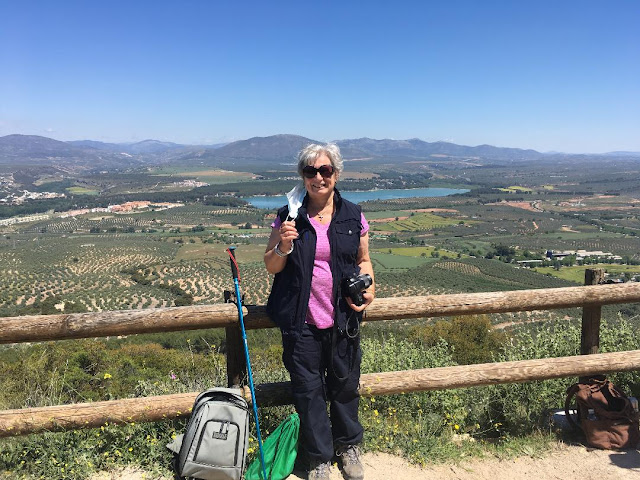 But mostly they were  steep. 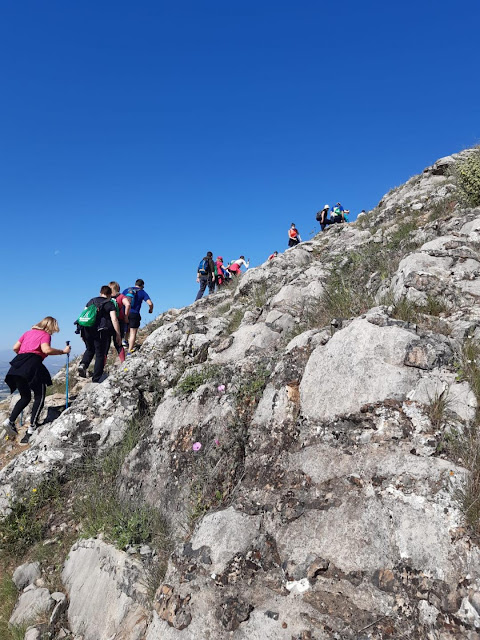 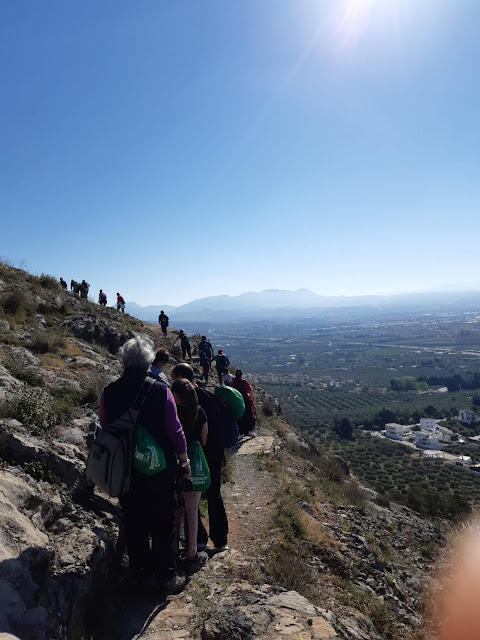 Then there were more hills to climb.
The views were magnificent. 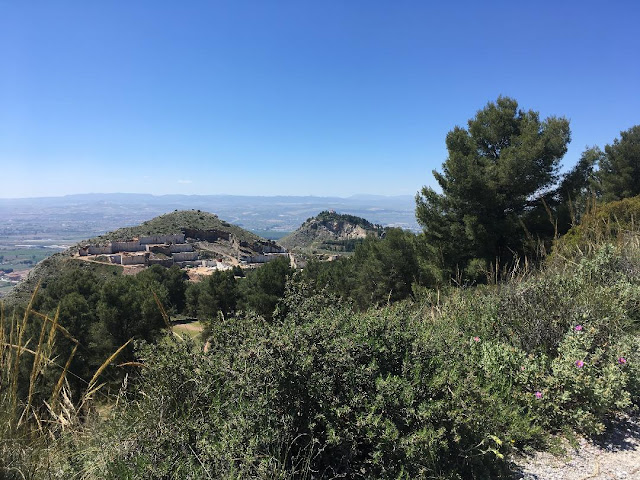 And our guide was gorgeous! He took off his mask for the photo, which is nice as I now know what he looks like. 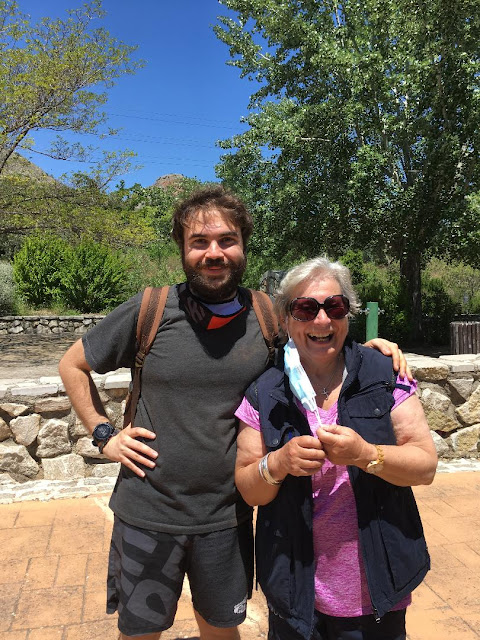 A large paella was being cooked while we walked. There were many groups from all over the province, so a big paella will feed many. 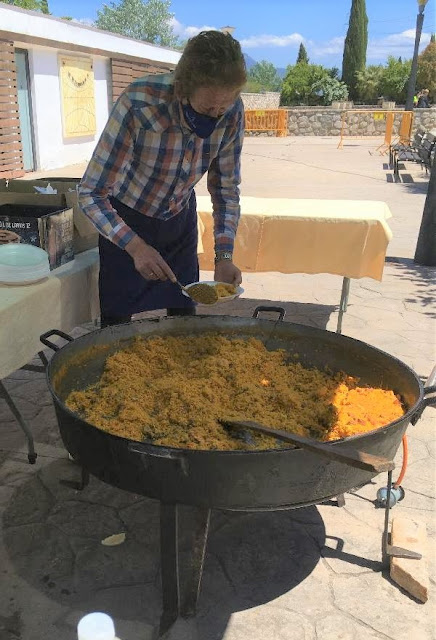 And that was our lunch. My drink is a Fanta Limon. This will be my qualifier for Elizabeth's T-Party. 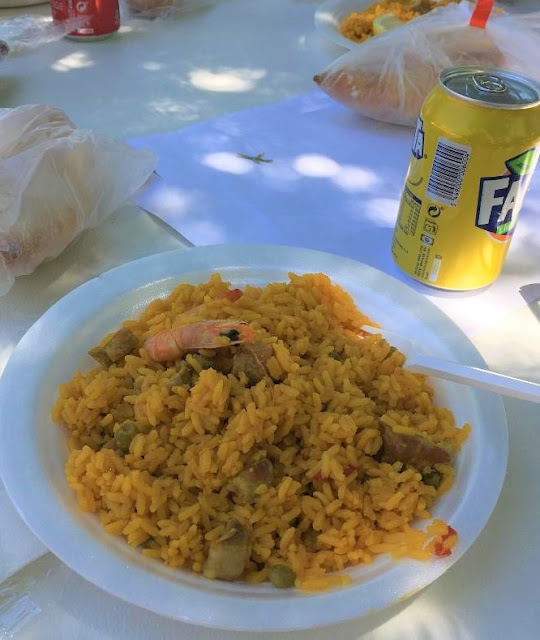 At 4 pm we were all ready to go back. Our coach was waiting. Our group was only 24 people, as the coach (that sits 50) was only allowed half capacity (Covid rules). We had to sit separately. Only families were allowed to sit together. 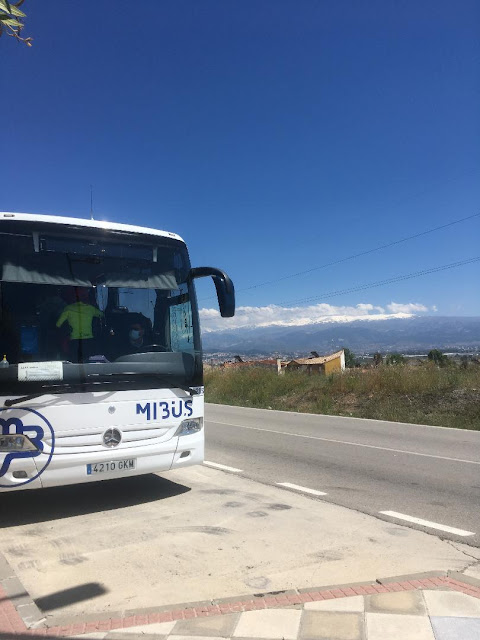 This is what I have been doing on the second of May. Sorry Elizabeth. When I got back home I fell asleep in the chair, so I didn't do a Second on the 2nd.
I hope you haven't fallen asleep with all these photos. They are rather a lot.
So I will call it a day.
Happy T-Day all!
Stay safe and healthy,
Hugs,
Lisca
Posted by Lisca at 00:46