Hello lovely ladies,
How are you today? Are you all ready to visit the T-Party? Get you beverage and join us at Elizabeth and Bluebeard's T-Party.

I would first like to show you some postcards. I have some mountain cards. The first one comes from Germany, but it doesn't actually say which mountain it is. 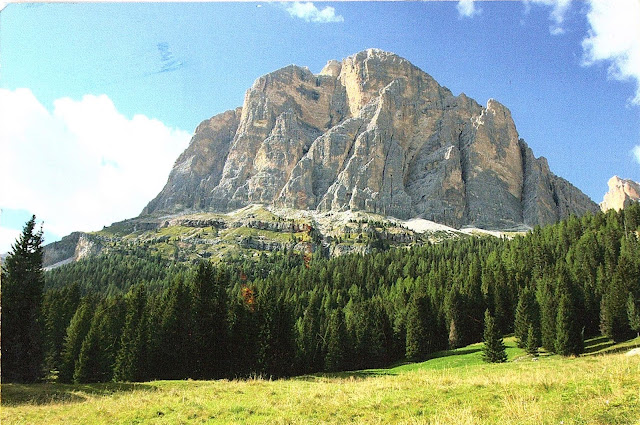 The stamps are gorgeous. The stamp on the right is Lorelei, which I featured in my blog of the 4th of May

The flower on the left hand stamp is Wiesenschaumkraut. Cardamine pratensis, the cuckoo flower, lady's smock, mayflower, or milkmaids, is a flowering plant in the family Brassicaceae, native throughout most of Europe and Western Asia. The specific name pratensis is Latin for "meadow". Wikipedia 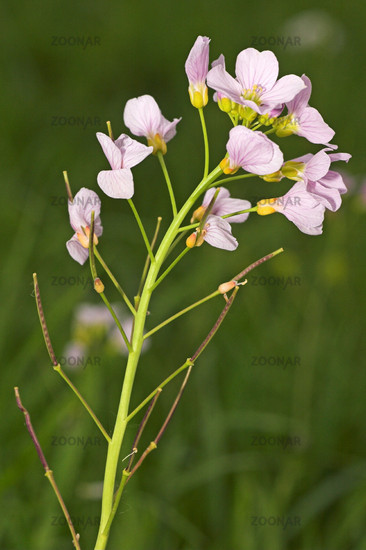 The second mountain card features the Yangtze River Gorge, and this is in China of course. The card was sent from Hongkong by Eden who tells me he lives in a small town near China (Hongkong is not so small I thought) 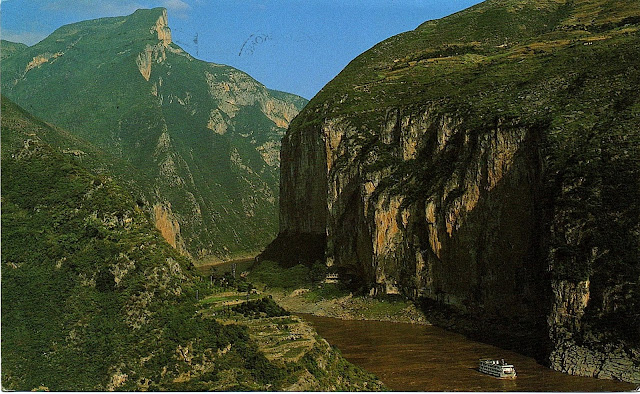 The stamp is a Christmas stamp (This card was sent in early January) and has Father Christmas practicing Tai Chi and the gingerbread men joining in. The dark part of the stamp is in reality gold foil, but it doesn't scan very well. 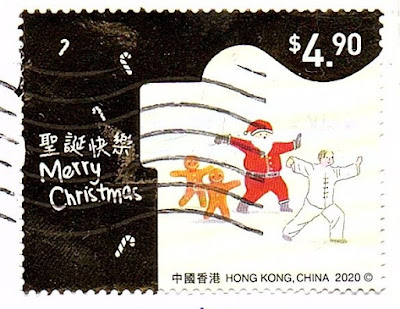 Here you can see it better. (Together with the other stamps in the series). 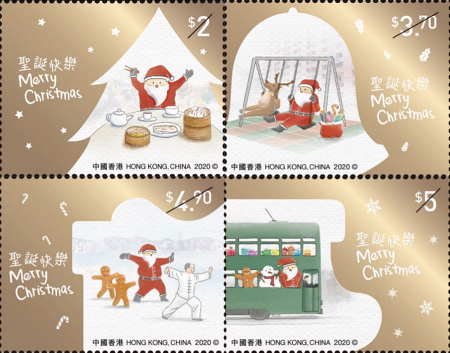 The last postcard comes from the Philippines. It features the Mayon volcano. According to the info on the back of the card the Mayon volcano has the world's most perfect cone. It is pictured here with the Cagsawa Church, a reminder of the eruption of 1841 when 1200 people perished. 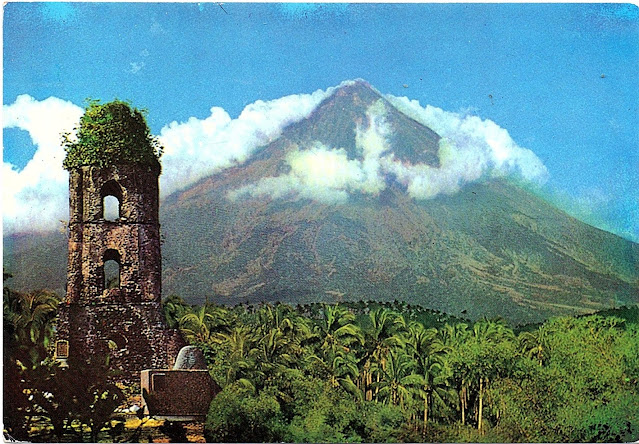 Wikipedia states that this eruption was in 1814. (Who is right?) 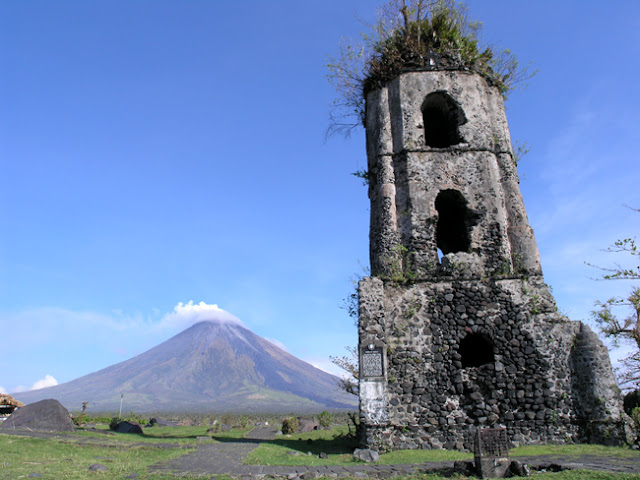 Here is another picture of the volcano 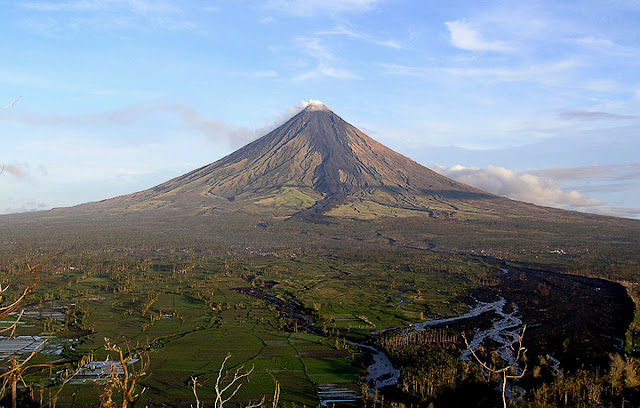 There was no stamp on this card, only a machine cancellation. 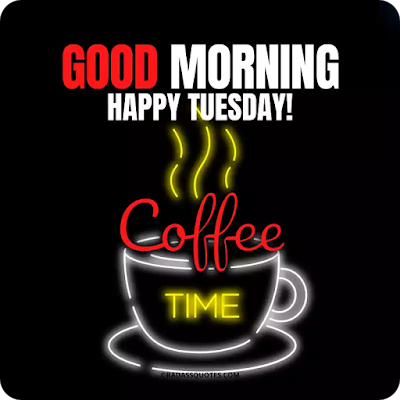 It's been a bit of a hospital week as Tuesday, Wednesday and Thursday mornings were spent in the hospital for various things. Hubby had his chemo therapy and I had my oncology check-up, hubby had his Covid test and we both had blood tests on different days. 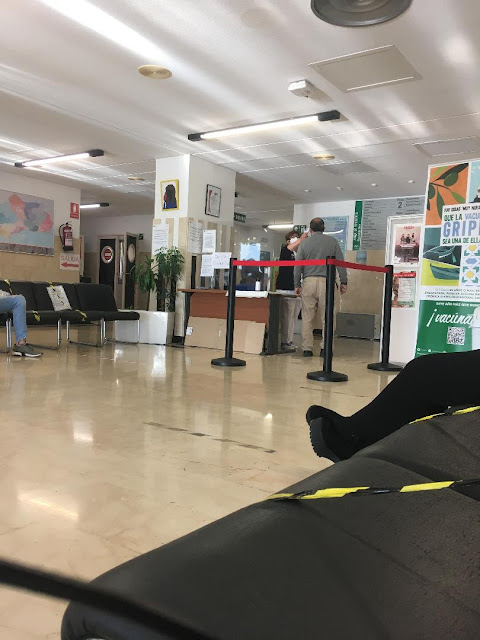 This is the hospital entrance. A member of staff is  checking the temp of the gentleman coming in. I'm in the hall waiting patiently for hubby (I'm not allowed in).
He has not been feeling very well these last few days, but we know that the side effects of the chemo gradually ease off, so tomorrow he should be having a normal day.
I have had my hair cut, now that the warm weather has arrived. 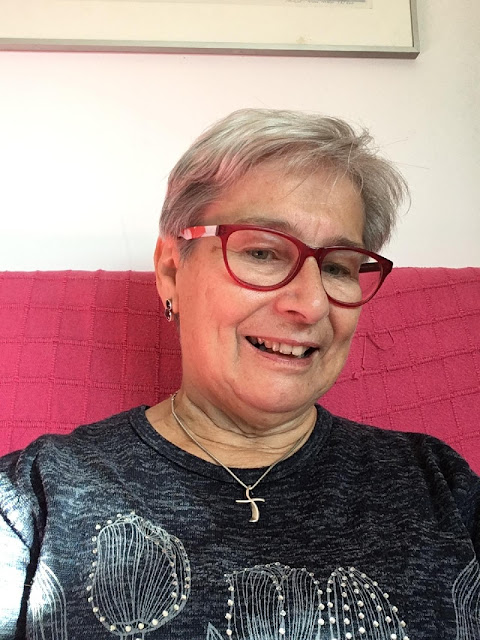 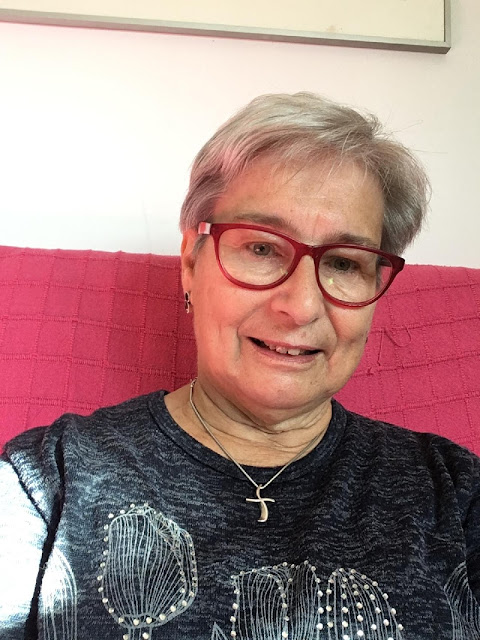 All of a sudden we are having a heat wave! (It was 32 C or 88 F)I have spent all yesterday sorting out my summer clothes.
Last Tuesday our friends came. He helps me with my photography and I give them lunch and Spanish lessons.
I made a another quiche: 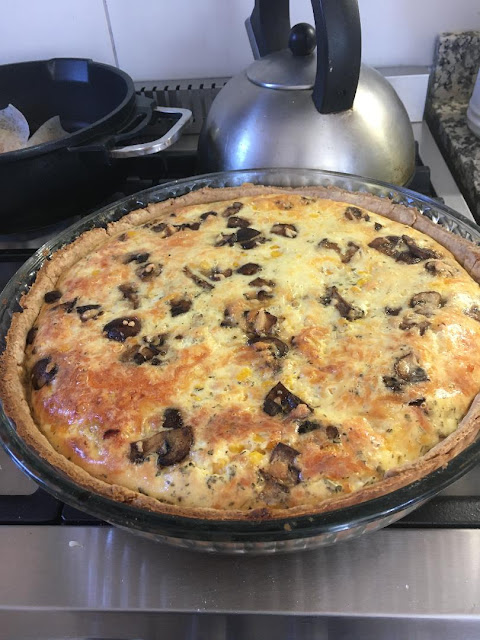 The theme for the photo entry was: mirrors. So I borrowed a pair of mirror sunglasses and we set up on our patio: 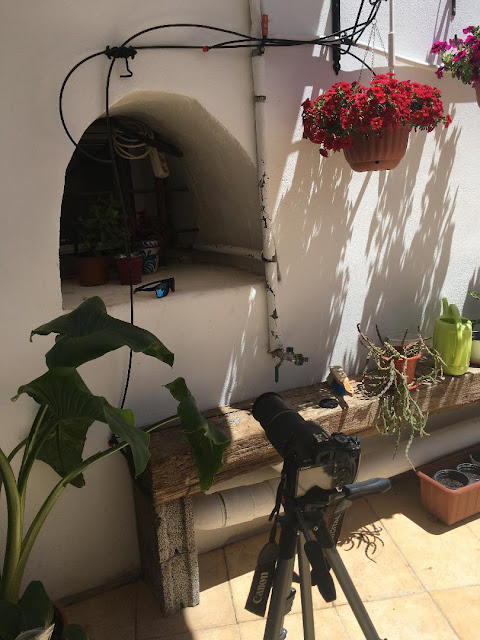 This was the result: 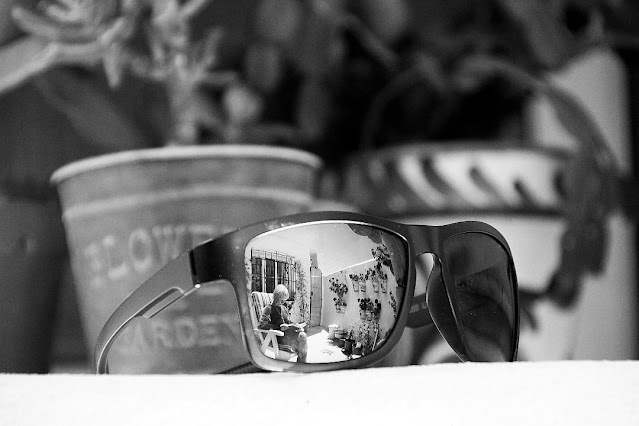 And this was the lunch: 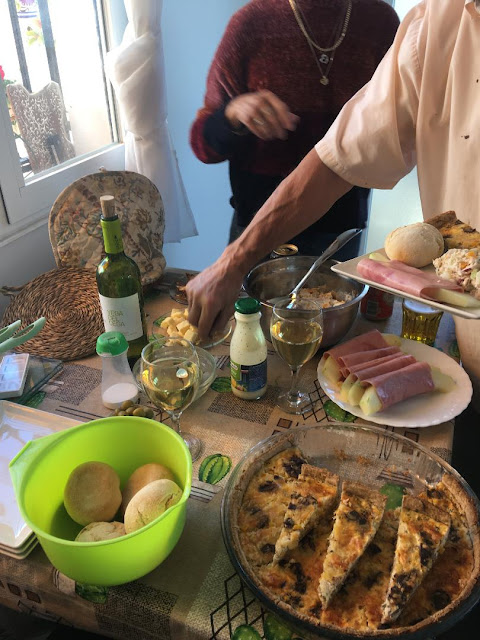 Wednesday afternoon we popped into the village to empty our recycling bin. 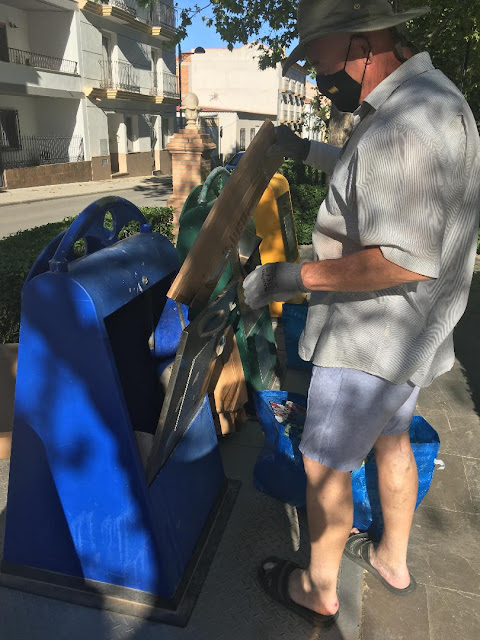 These things are colour coordinated. Blue is for cardboard and paper. Open the door and the paper/cardboard will fall into a large underground container. 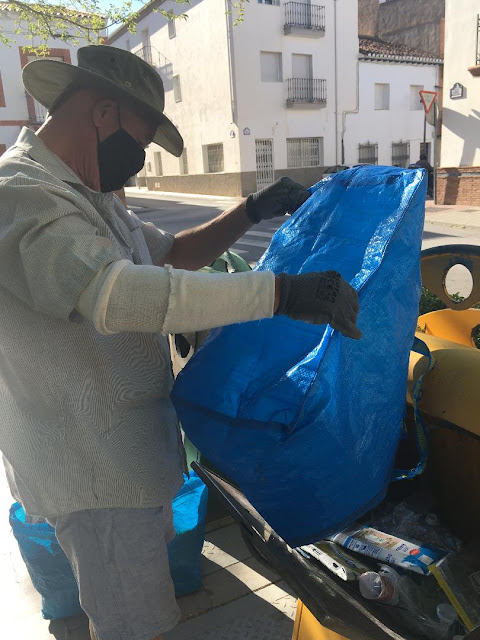 The yellow container is for plastics and tetrapaks.
Do you have Tetrapaks in the US?
As far as I know it is a Swedish invention, so I just wondered... 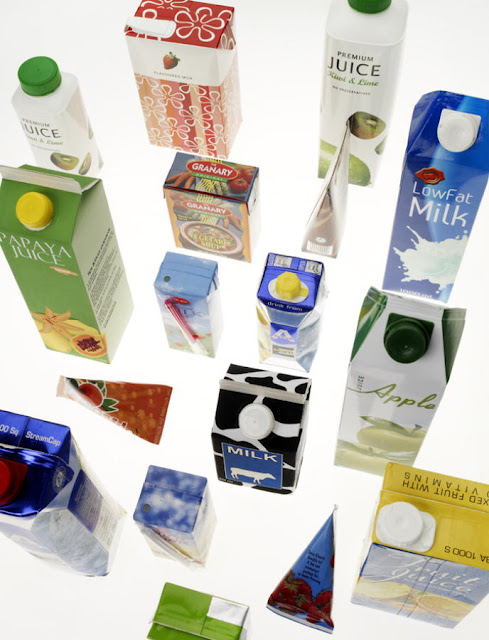 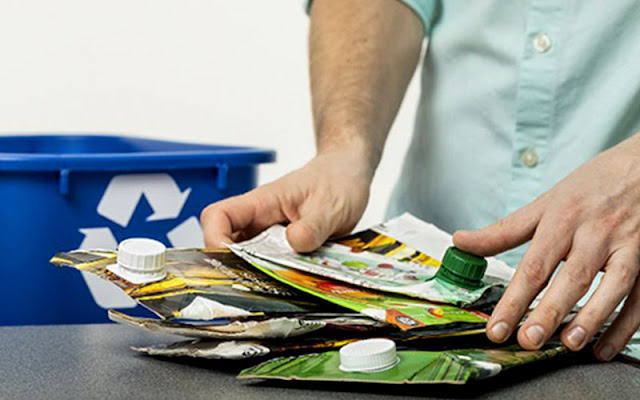 So they are easy to recycle.
Last but not least I would like to show you my jasmin, which is flowering and is giving out the most wonderful fragrance: 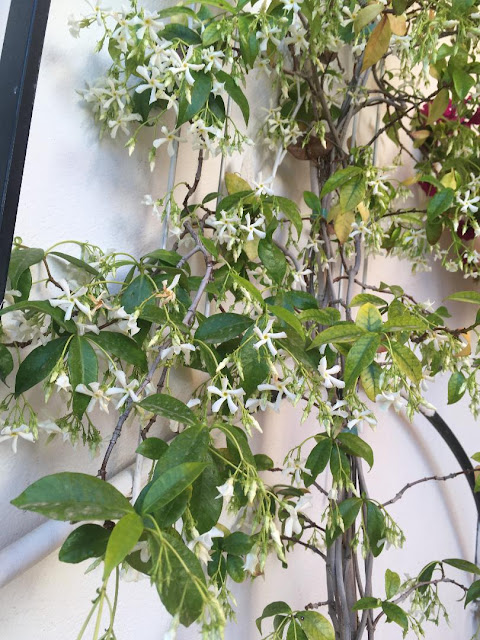 That's it from me today. Looking back I see that i have several beverages for the T-Party.
Happy T-Day everyone!
Hugs,
Lisca