Hello lovely girls! Here I am again on Friday. A bit later than usual as Blogger was playing up and I could not get anything written as it would not accept any photos for some reason. I've let it stew for a bit and re-booted this morning and now we are 'cooking on gas!'
We have had a good week and the heatwave has run its course and yesterday it was cooler and it even rained a bit. We need the rain so that is good news.
My postcard comes from Germany and it depicts Maria Sibylla Merian. 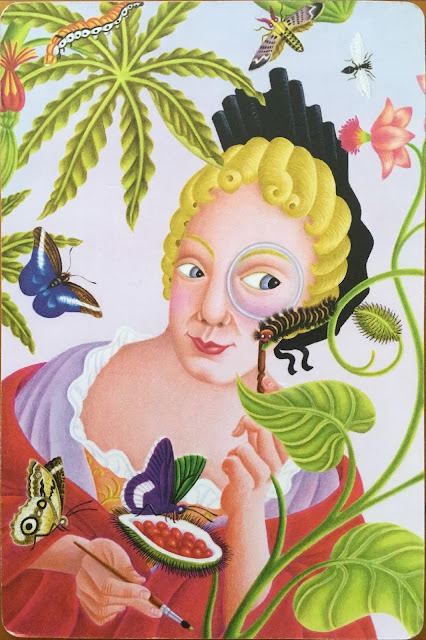 This is what Wikipedia says about Maria Sibylla:

Maria Sibylla Merian (2 April 1647 – 13 January 1717) was a German-born naturalist and scientific illustrator, a descendant of the Frankfurt branch of the Swiss Merian family. Merian was one of the early European naturalists to observe insects directly.

Merian received her artistic training from her stepfather, Jacob Marrel, a student of the still life painter Georg Flegel. Merian published her first book of natural illustrations in 1675. She had started to collect insects as an adolescent. At age 13, she raised silkworms. In 1679, Merian published the first volume of a two-volume series on caterpillars; the second volume followed in 1683. Each volume contained 50 plates that she engraved and etched. Merian documented evidence on the process of metamorphosis and the plant hosts of 186 European insect species. Along with the illustrations Merian included descriptions of their life cycles.

In 1699, Merian traveled to Dutch Surinam to study and record the tropical insects native to the region. In 1705, she published Metamorphosis insectorum Surinamensium. Merian's Metamorphosis has been credited with influencing a range of naturalist illustrators. Because of her careful observations and documentation of the metamorphosis of the butterfly, Merian is considered to be among the more significant contributors to the field of entomology by David Attenborough. She discovered many new facts about insect life through her studies.

I always admire female scientists, especially from the days where girls were not allowed to study. 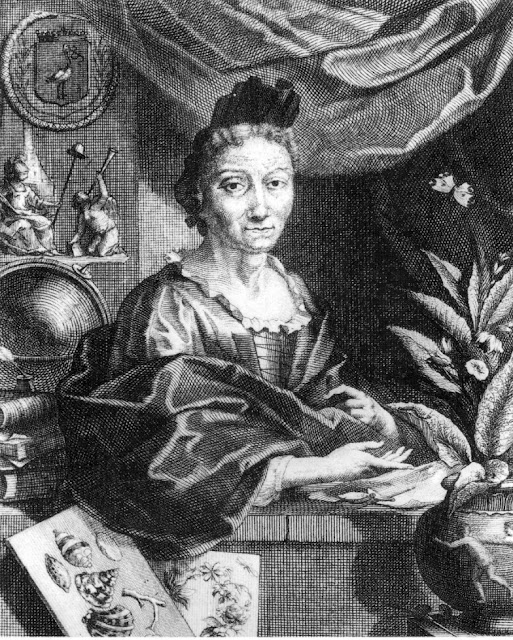 An occupational portrait of Maria Sibylla Merian (c. 1700, copperplate by Jacobus Houbraken from a portrait by Georg Gsell). Her status as a scientist is emphasised by the pile of books next to her. The globe and the prints draw attention to her accomplishments. The pair of engraving needles and the emblem of her father emphasize her ancestry.
I also found out that when her marriage failed she moved to the Netherlands with her mother and daughter and joined a religious Labadist community in Friesland. The Labadists believe in equality of the sexes. (Among other things).
The illustration on the postcard was done by Elisabetta Stoinich, who is involved in a project called Good Night Stories For Rebel Girls, a children's book that reinvents fairy tales, inspiring girls with the stories of 100 great women from Elizabeth I to Serena Williams. 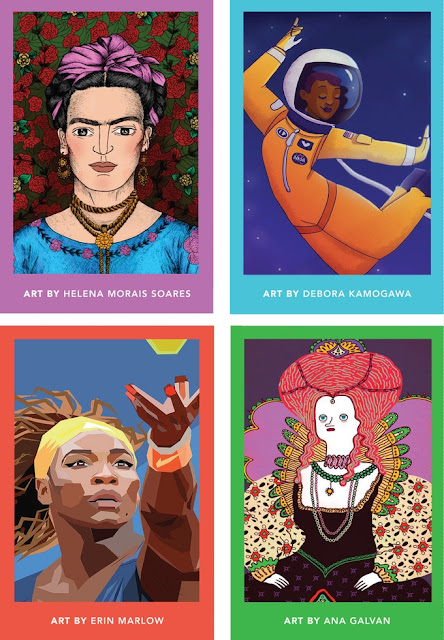 Each woman's story is written in the style of a fairy tale.
Great stuff!
The stamps are very colourful

We know from Iris that Die Maus is a children's program in Germany which has run for donkey's years. (50 to be precise).
Let me tell you what my week was like. After all this Friday blog is to highlight the smiles and silver linings of our day to day life.
Friday we had a busy 'potter' day. The weather was not so nice and all sort of chores inside the house got done. As hubby changed the bulb of the old lamp, I cleaned the glass lamp shade and the glass funnel (It used to be a gas lamp). 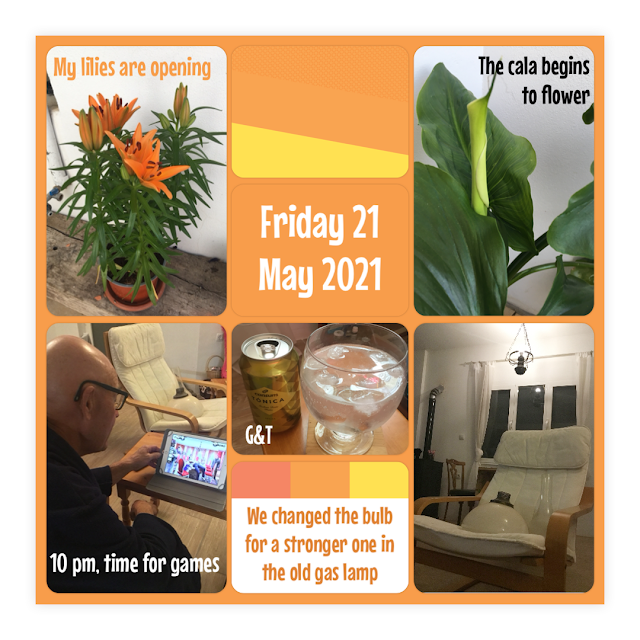 Saturday continued in the same vein. I had ordered curtains online and we hung them up. 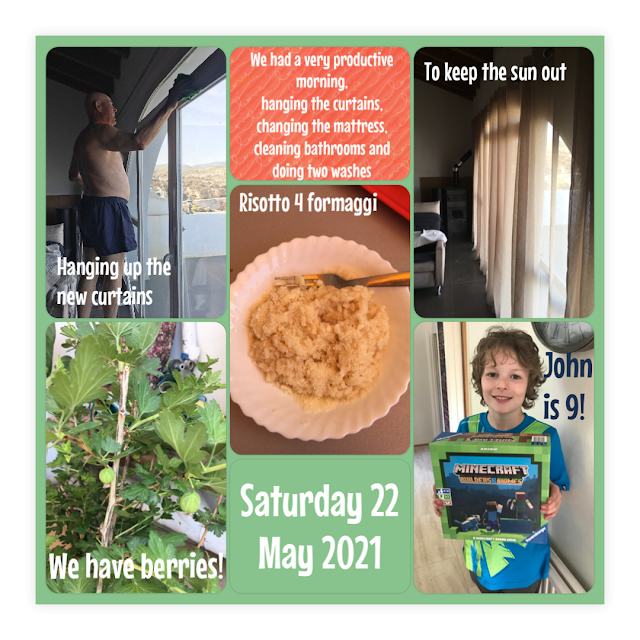 On Sunday I made a lovely egg custard tart. It is my husband's favorite and it is very easy to make as I use shop-bought puff pastry. 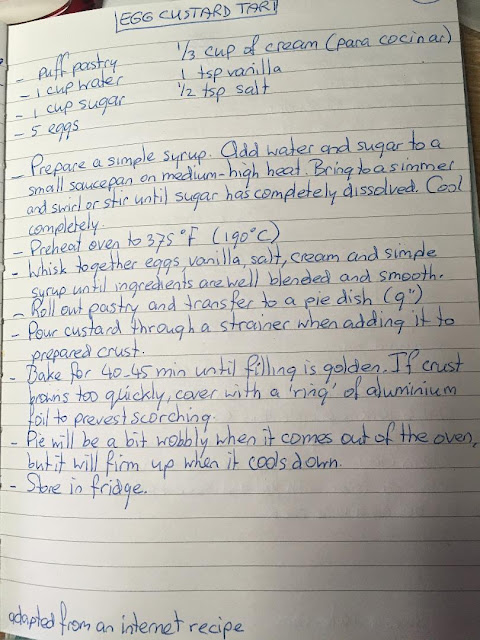 The cream I used is 'cream for cooking', but in America they use half and half and that works too.
As you can see our gooseberry bush is bearing fruit! 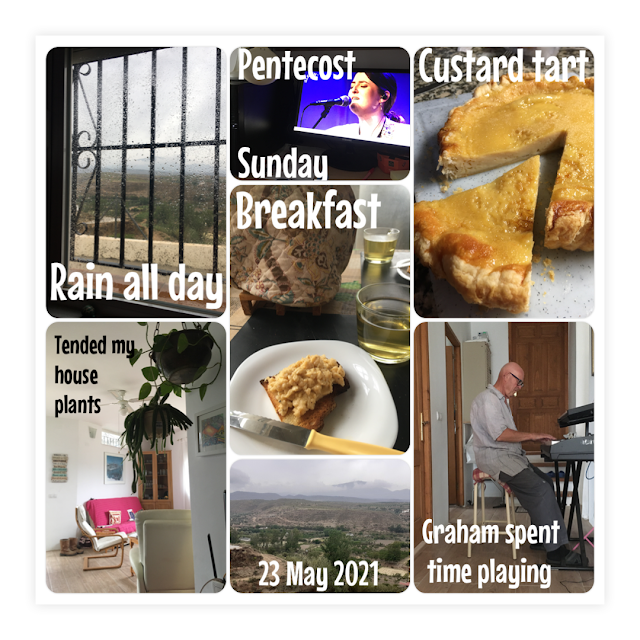 Monday the weather was still dull, so I did some sewing. As you can see, my plants are doing very well and it is a joy to watch them.
I cooked a Dutch dish called 'stamppot', which is potatoes and cabbage mashed together, with some gravy and a traditional Dutch smoked sausage. Simple but very nice. 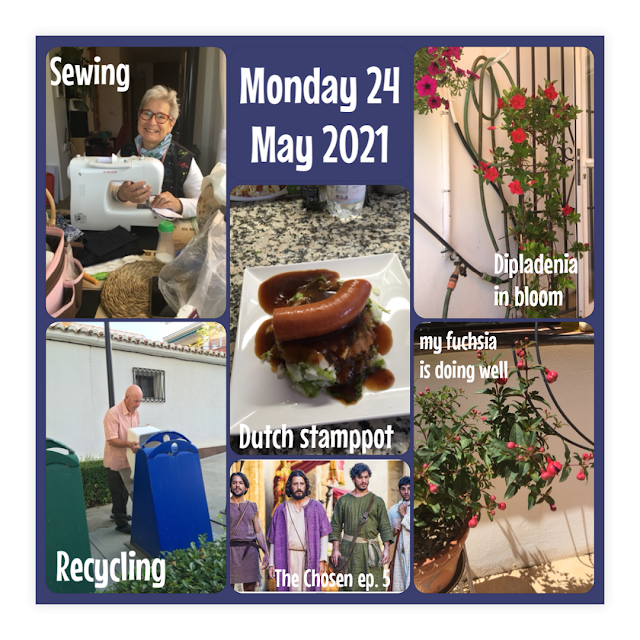 In the evening we watched another episode of The Chosen, a (non religious) tv series about Jesus and his apostles. (Ignore the first 10 min intro by the director). 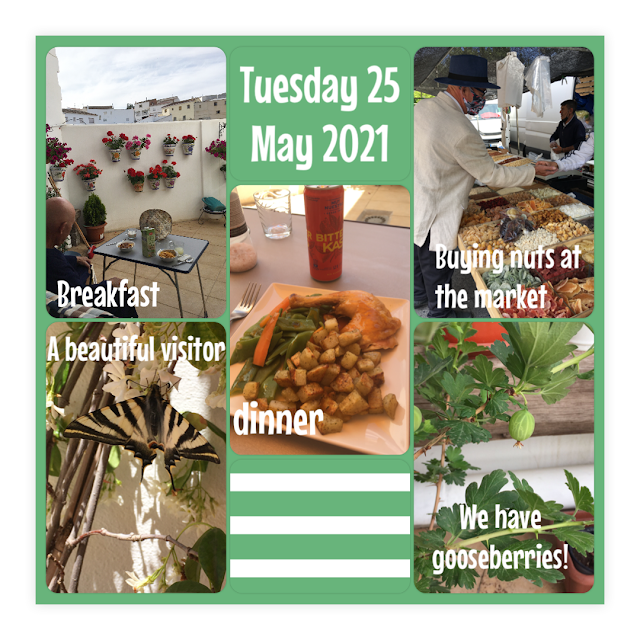 Tuesday is market day in Caniles and hubby wanted some nuts and dried cranberries and goodness what else. So we visited our favorite stall. 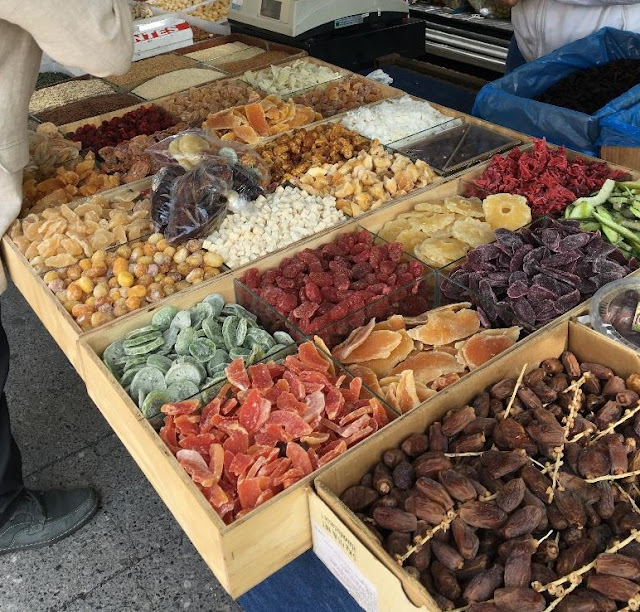 We also had a very beautiful visitor at breakfast: 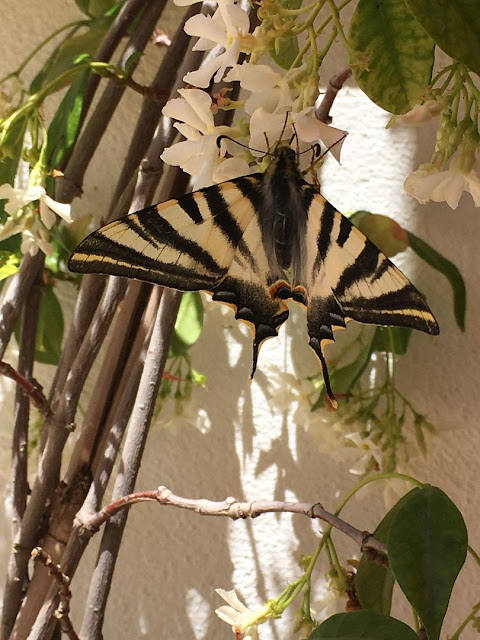 On Wednesday we met with a Dutch family that lives nearby and I made another custard tart (the second this week). 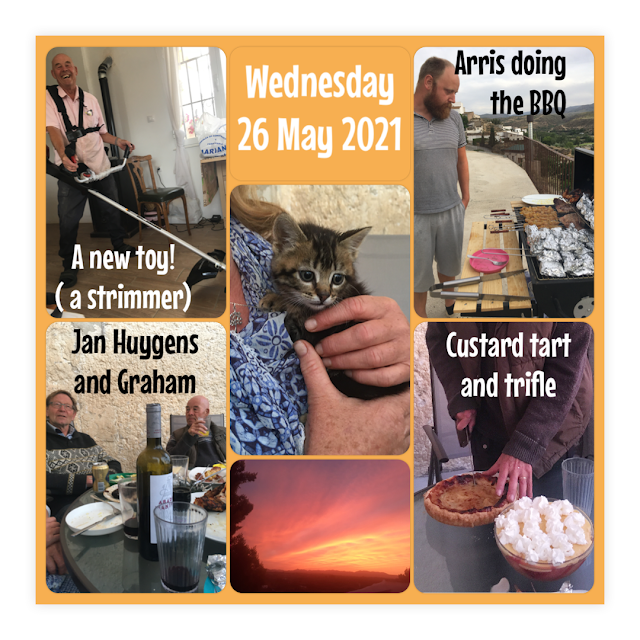 We were treated to the most gorgeous sunset. The photo in my collage and the photo below were taken by our neighbor Martin. 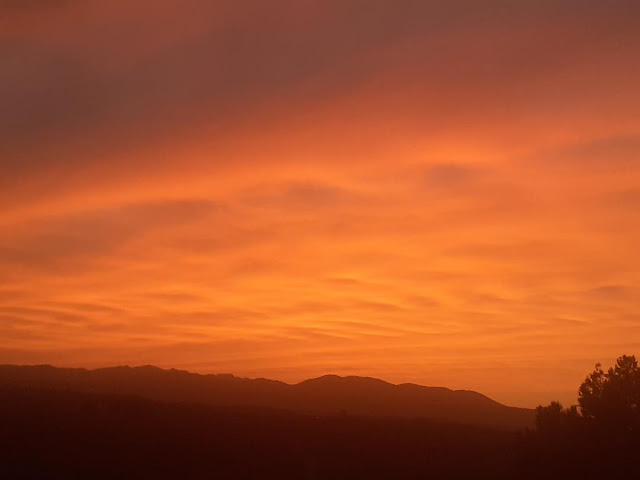 Of course it was so spectacular because of the blood moon. 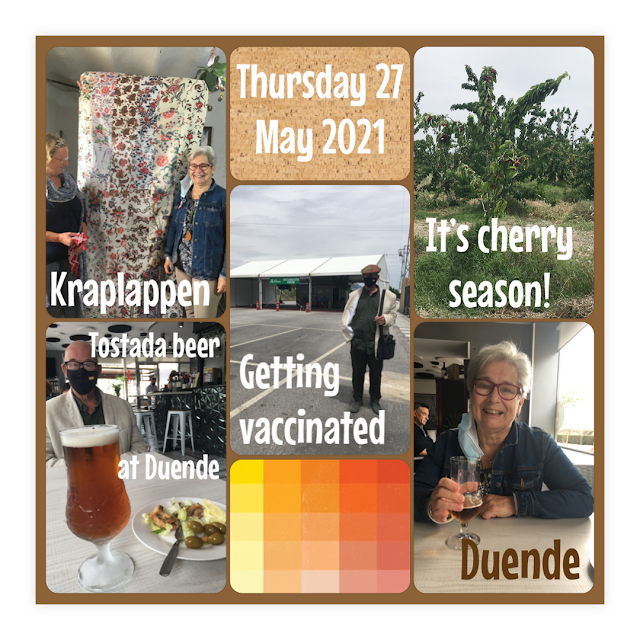 Yesterday hubby had to go to the hospital for his Covid vaccination. People with medical problems have theirs in the hospital, just in case. In the photo you see hubby walking through the hospital car park and you see the hut where they do the drive-in vaccinations. We saw a few card go through, but there were no queues.

Next to the hospital is a field with cherry trees. I took that photo through the fence. There was a guy selling cherries over the fence to people coming out of the hospital. We also bought a kilo as they looked so delicious. 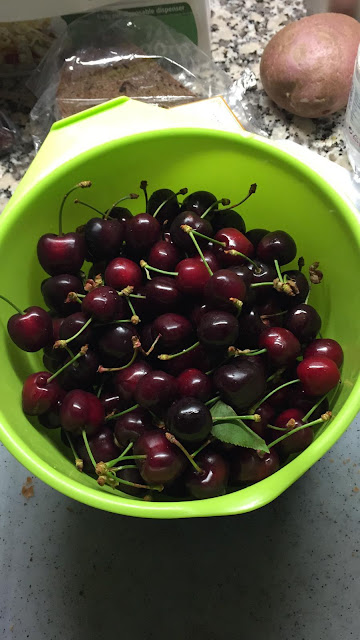 After the hospital we stopped at a local bar for a drink. They have that lovely darker beer which I like, and of course it is served with a free tapa. Mine was some fried little fish, lettuce and olives. Just right.
The story about the top left photo I will write on Tuesday as I have no more time now. It is already Friday lunchtime.
So I will say goodbye now, and finally link up with Annie at A Stitch In Time and with Virginia at Rocking Your World Friday.
Of course there will be some funnies at the end. Probably not the best as I have no time to really pick and choose.
Have a lovely weekend and keep smiling!
Hugs,
Lisca 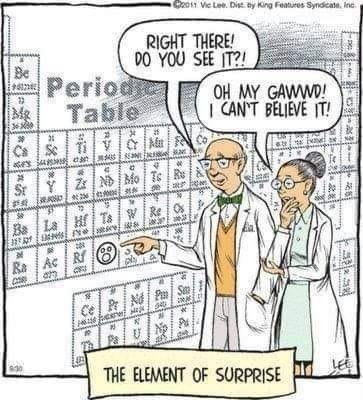 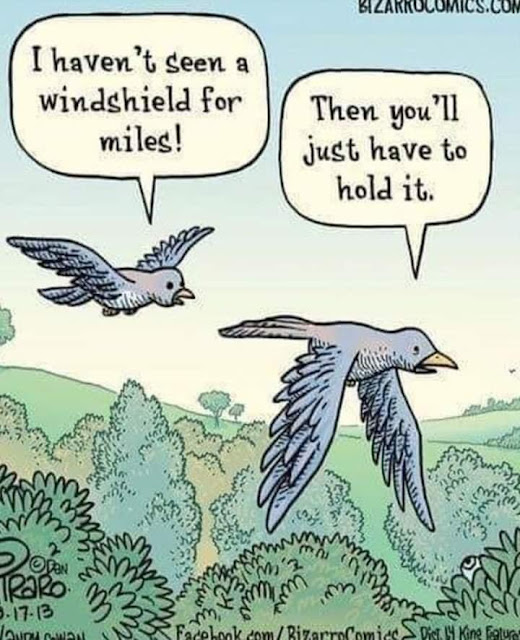 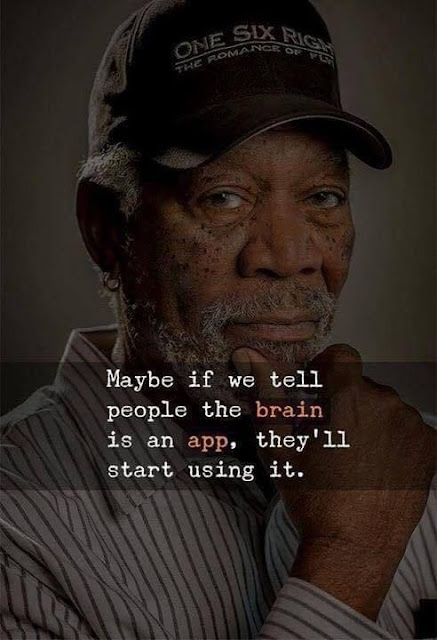 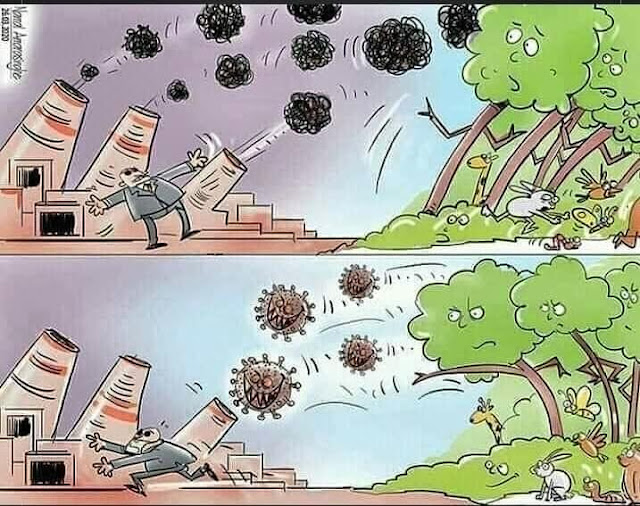 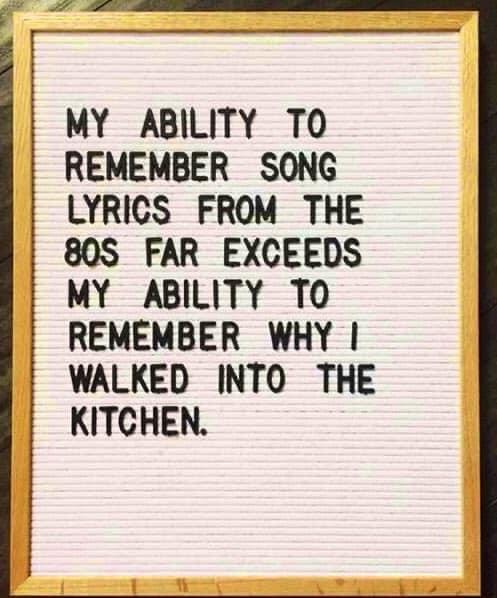 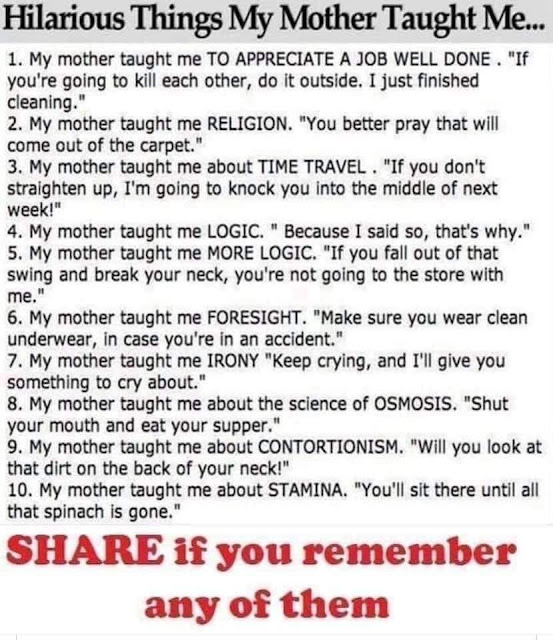 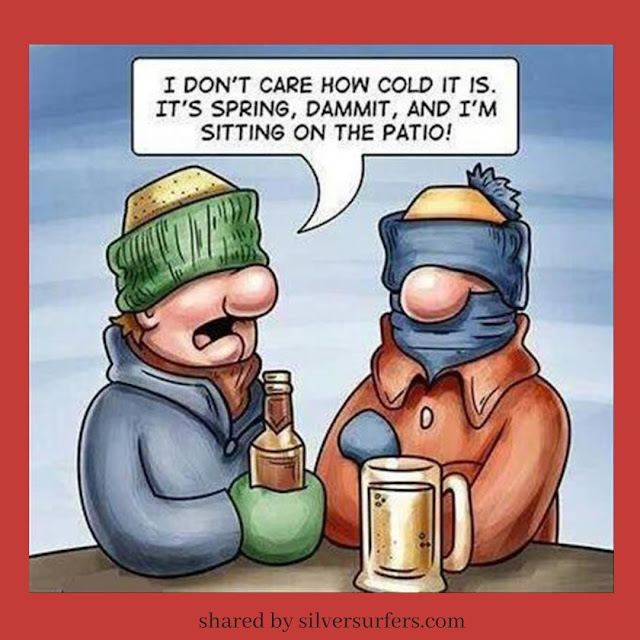 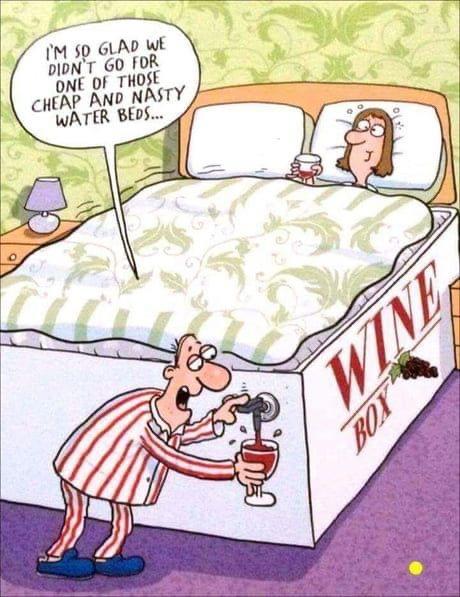 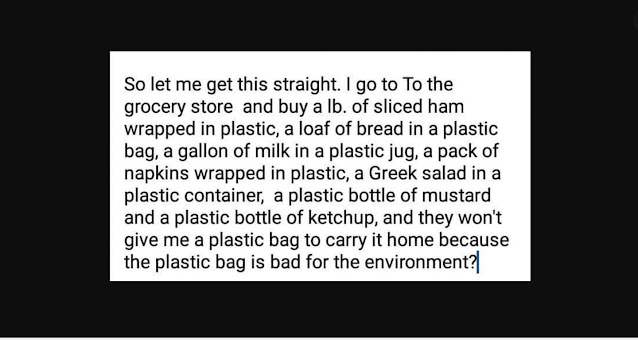 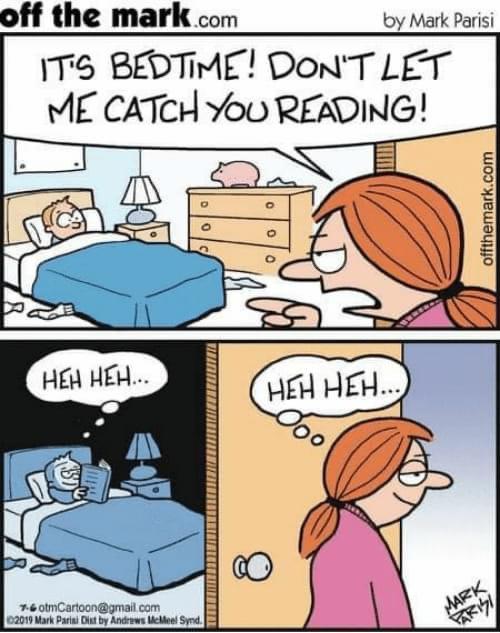 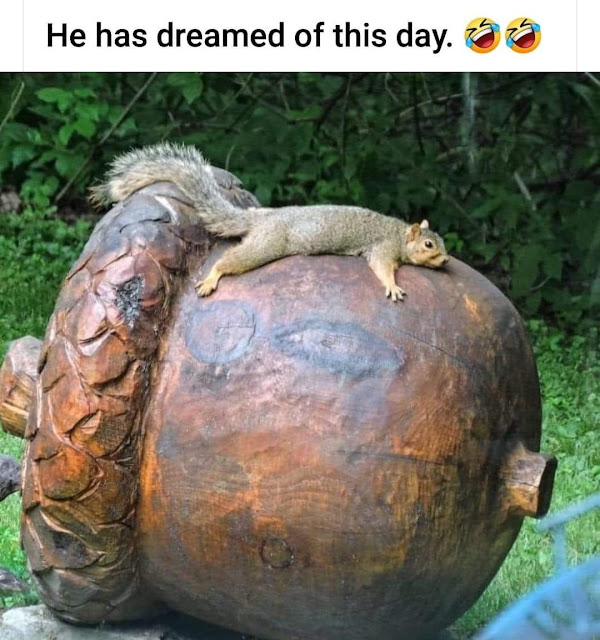 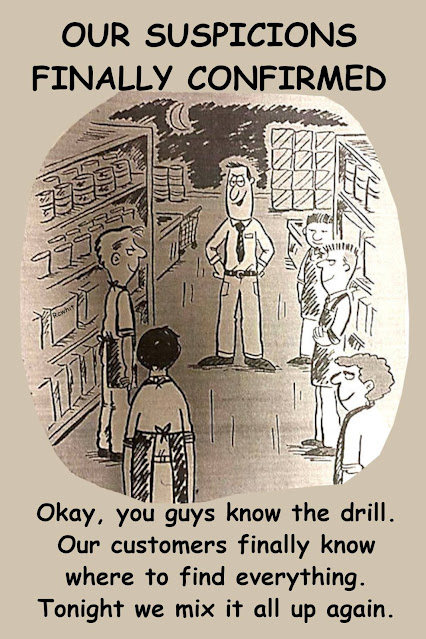