A Postcard A Day - Tuesday 29 September 2020 - T for canals, abandoned houses and a tithe barn. 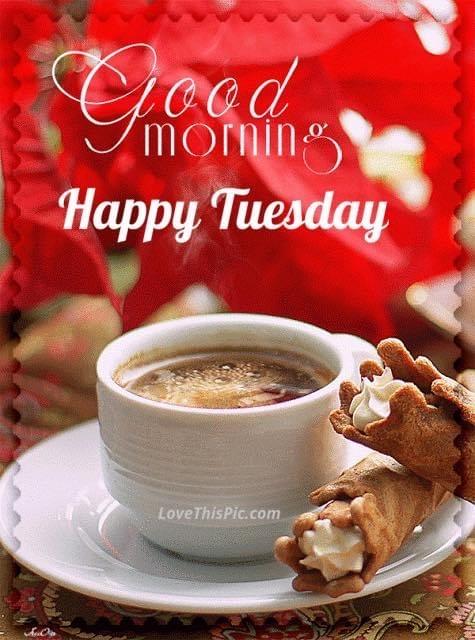 Happy Tuesday! This post is going to be a short one as it is scheduled. We are away for a few days. We had booked a hotel for my birthday in March, but the hotel closed because of the Covid virus. We have re-booked and are now (hopefully) enjoying lovely walks and lots of fresh air.

I will be linking this with Elizabeth and Bluebeard's T-Party. My ticket to the party is the above cup of coffee.

First off is my postcard. This one comes from the UK, from a city in the middle of England called Birmingham. It is England's second largest city (after London), and it has more miles of canals than Venice. 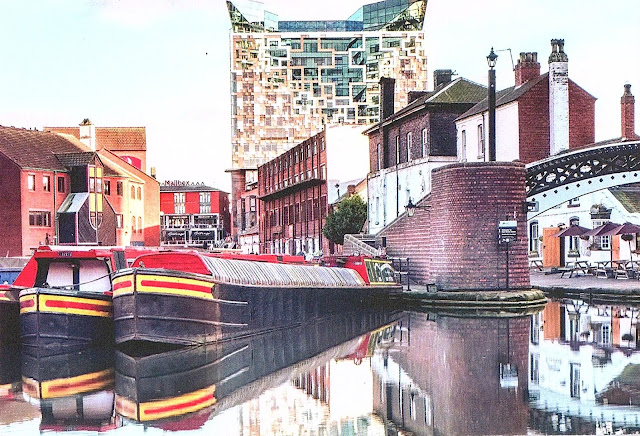 Birmingham has 35 miles of canals, which is said to be more than Venice. They're enjoyed by walkers, cyclists, and narrowboat owners and they are a reminder of a unique industrial history.During the Industrial Revolution the canals were busy waterways transporting coal, iron and other heavy goods. They played a crucial role in the development of Birmingham and the Black Country.Most of the canals were built in the 1700s and 1800s and there were more than 170 miles of them. One of the first to be built was the Duke of Bridgewater's Canal. It carried the Duke's coal from inside the mines 15 miles to Manchester. It was finished in 1761 and most of the engineering work was planned and supervised by James Brindley. Brindley was a millwright by trade and one of the most notable engineers of the 18th century. He worked on six canal projects in the Midlands.For 170 years the canal system was bustling with activity. Towards the end of the 19th century the tonnage of goods carried increased reaching 8 and a half million tonnes in 1898. 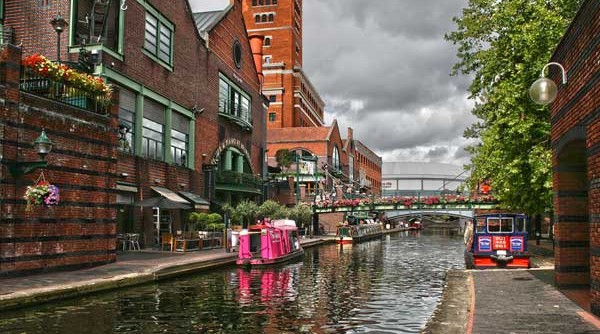 Although the canals were profitable, they were costly to build and maintain. In the 1820s Thomas Telford was employed to inspect Birmingham's canals, which had severe maintenance problems. He suggested an overhaul of the canal system, which included the straightening of many canals.As canal industries declined and railways and roads took over the long distance transportation of goods, use of the canals decreased. By 1980 all commercial traffic had stopped. Over the years canals fell into disrepair. However, many have since been restored and their surroundings improved with parkland, housing and many stunning modern developments, creating vibrant areas with shops, restaurants, bars and entertainment.

Here are some more photos of the canals in Birmingham (from the Internet): 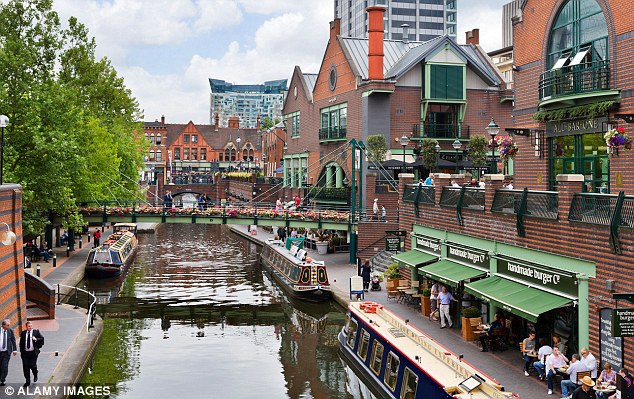 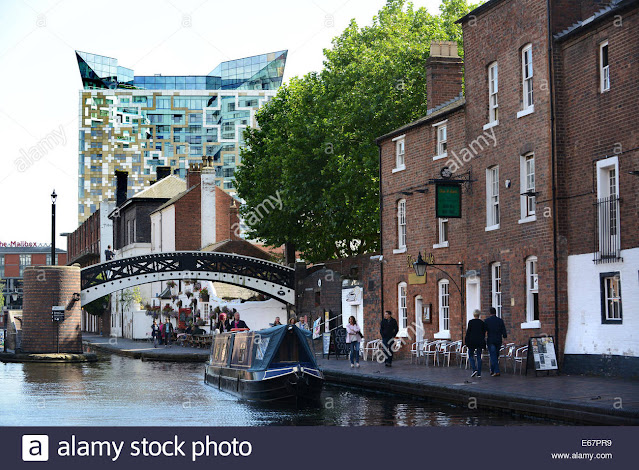 The stamp is very English. It features the English flag with the red St George's cross, and Magdalen College. Magdalen College is a constituent college of the University of Oxford. It was founded in 1458 by William of Waynflete. 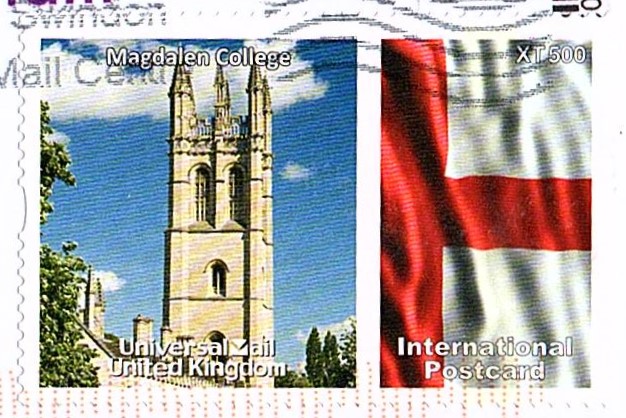 Here are some photos from the Internet (Wikipedia): 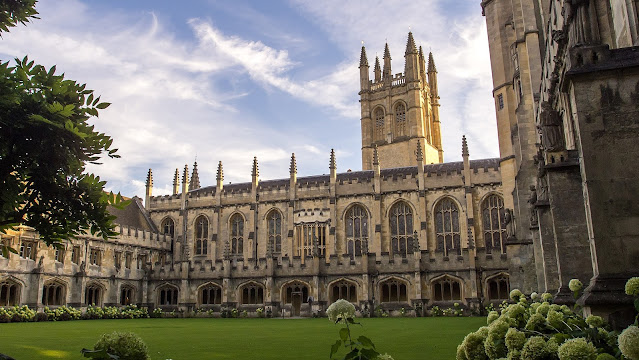 It reminds me so much of the TV series Morse.
And look at that dining room! (Harry Potter?) 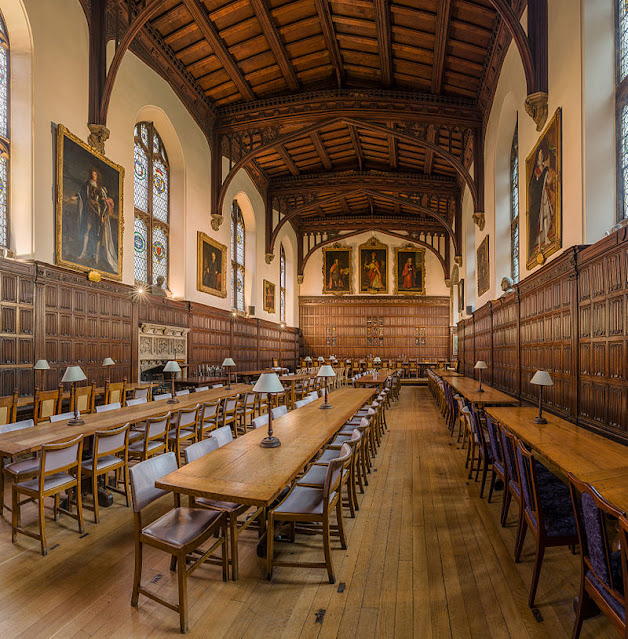 So, what have I been up to this past week? I bought another mask to match hubby's. Covid cases are on the up even here in rural Spain, and although we are not in lockdown as such, but still no groups allowed or events or anything. I'm getting very unfit and I was hoping that the gym might re-open but no chance of that just yet. 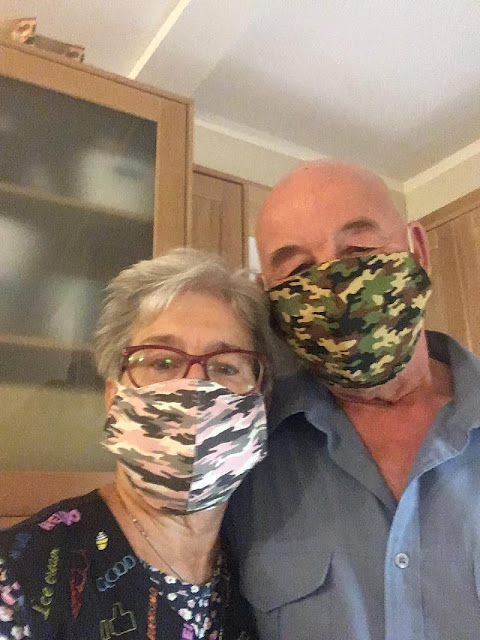 The swifts (I think they are swifts) have been gathering everywhere and have now headed south. I have been told that these are the youngsters, and that the parents have already left a couple of weeks before. I guess they had some more growing to do. 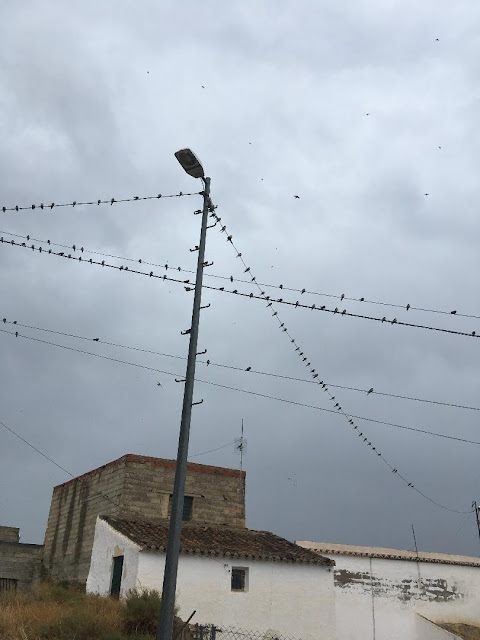 I found this image on the Internet somewhere and though it was lovely. 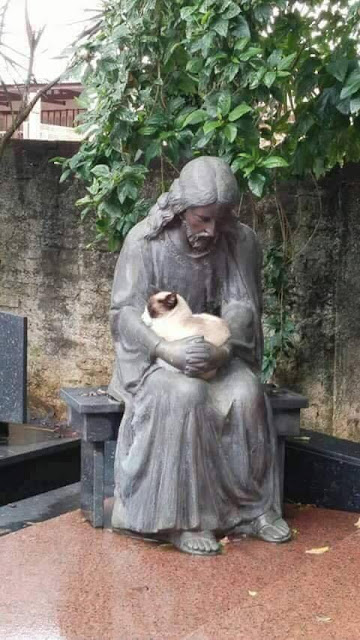 This month's theme at the photo club is 'Abandoned Buildings', so I visited our friends who live in the next village. There are some abandoned houses near their house and we went inside one and took some photos. The house looks as if the residents have just left unexpectedly. This is a bedroom where the wall has collapsed and when we went in we saw that the bed was still made and below you can see a drawer with some knitting in it. 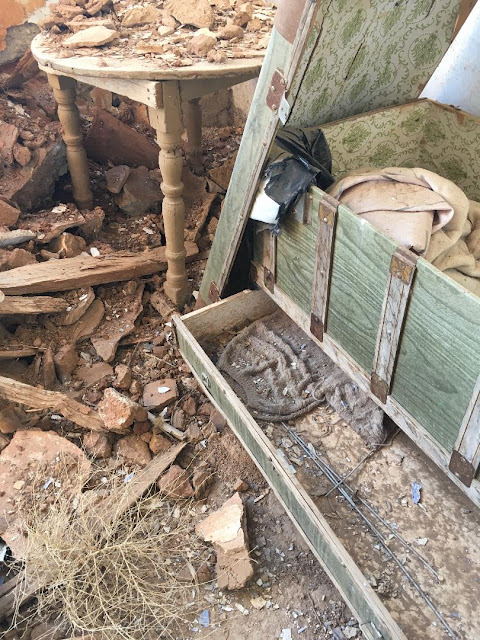 This room was not accessible of course. 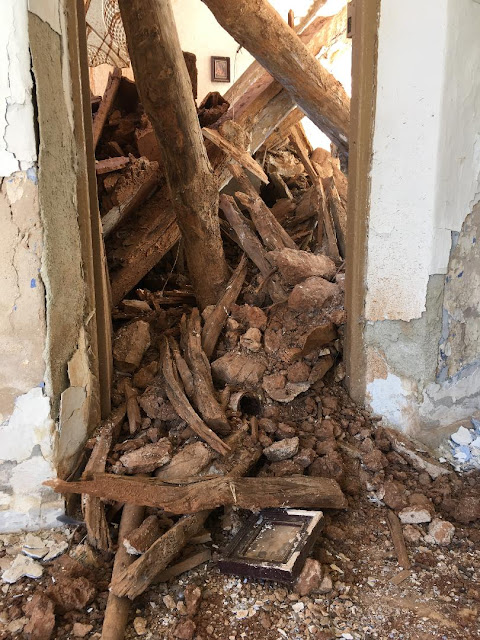 In the end, below is my entry for this month. I will hear next month how it scored. 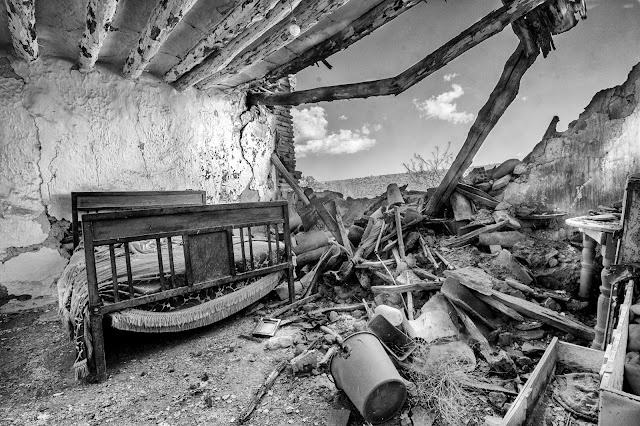 The above scene struck me as the bed was still made and the knitting is still in the drawer.
Also during the week I met a friend who has a bakery, which is on the other side of the village. When I walked back I took a different route home and came through streets I had never been.
The photo below shows the so-called Posito, which in England would be a sort of tithe barn. I heard recently that subsidies have been granted to restore this building, so I thought I'd go and have a look. 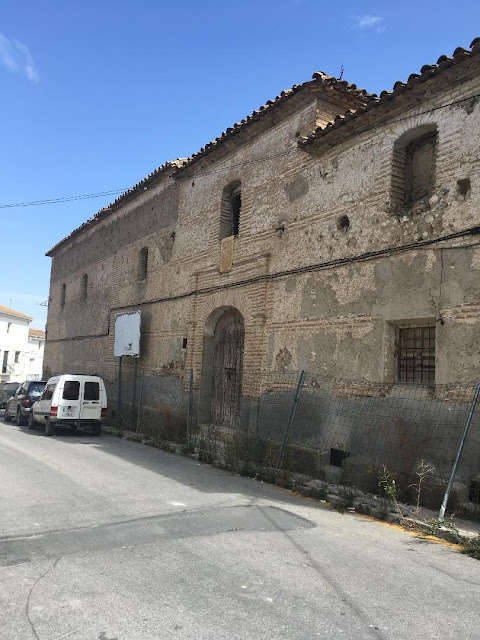 The positos, which arose in the 15th century, were warehouses that acted as true cereal banks, used by the local farmers. They were built on the initiative of individuals, with charitable intentions, which are manifested as an example of “feudal charity”. 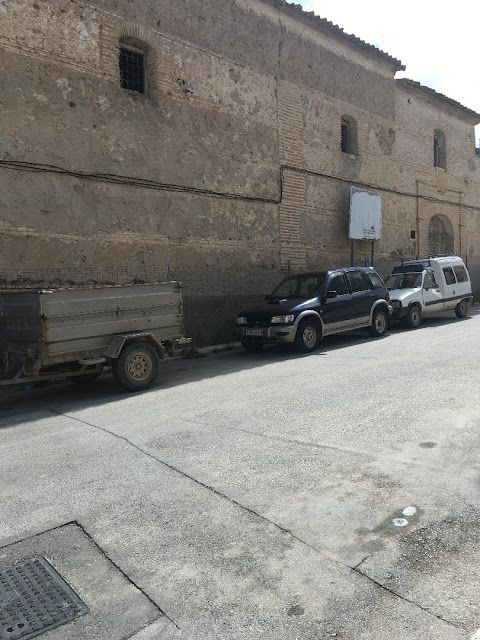 The purchase and sale prices of grain were regulated, and loans could be borrowed, thus freeing the farmers from usury. 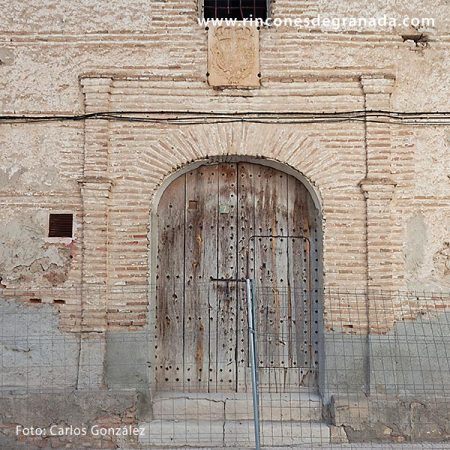 The Pósito de Caniles was built in the second half of the 18th century, on the outskirts of town, by the builder Torcuato Ruiz Rodríguez. Its structure was made entirely of brick and masonry. 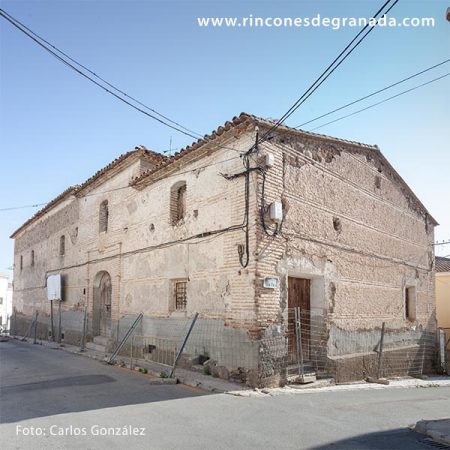 The Caniles Pósito is rectangular in shape, 31 meters long by 12.50 meters wide, and its height is greater than 11 meters.
The photo below is just one of the little streets on my way home. 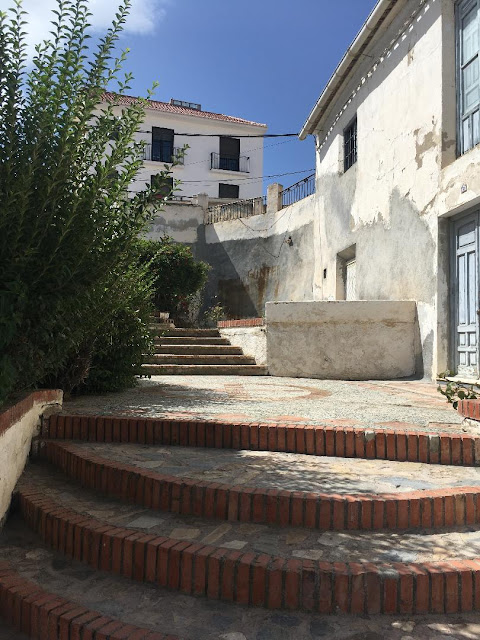 And this is my friend's bakery. (The front door has been changed into a till, so people need not come into the bakery to get their bread and cakes) 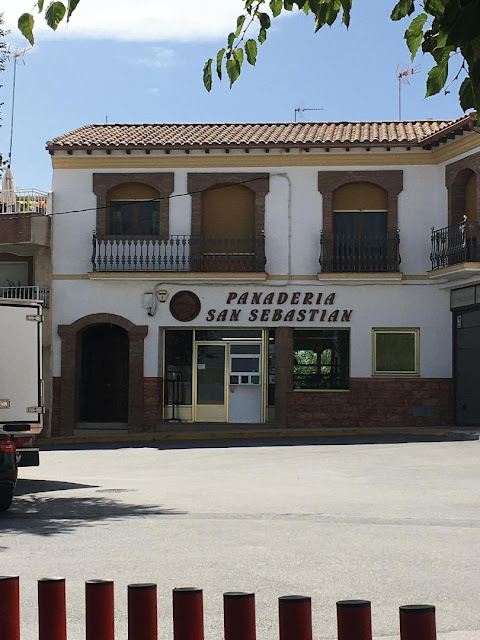 That is all from me this week. I will be scheduling this post, but I will have my iPad with me so I will be able to read all your posts but I won't be able to comment until I get home. (Blogger doesn't work on iPads.)
Have a lovely week, stay safe,
Hugs,
Lisca
PS I have not been able to schedule, so just posted it early.