Hello lovely ladies, Here we are again on Tuesday. Are you all ready for the T-Party hosted by Elizabeth and Bluebeard at Altered Book Lover? All that is needed is a beverage, or something drink related.
My entry could well be these cute tea cups planted with succulents. I really like that. Let me show you some postcards. This week I received two postcards from Germany, on the same day, from the same town (Rostock), but from different people. Isn't that a coincidence.
Rostock used to be in the former DDR (Eastern Germany). I know a little bit about Rostock because our eldest lived in Rostock for a year. He took a year out in the middle of his business degree to get some practice in Germany. His main foreign language was German so he could also practice his language skills. It was not long after the 'Wall' fell and the business he worked for didn't have a clue about business and marketing (having lived under a communistic regime), so he ended up teaching them about business and marketing instead of learning. But nevertheless, it was a good experience. 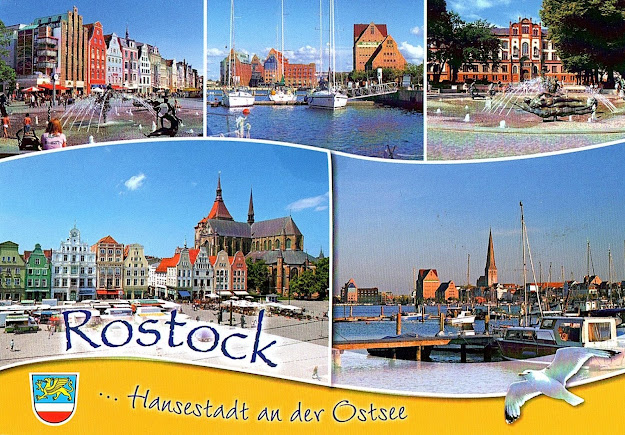 Rostock was one of the Hanseatic towns. Do you know about the Hanseatic League? I feel a history lesson coming up! Just scroll down and skip it if you are not interested.

Hanseatic league- A former economic and defensive confederation of free towns in northern Germany and neighboring areas. Traditionally dated to a protective alliance formed by Lübeck and Hamburg in 1241, it reached the height of its power in the 1300s and held its last official assembly in 1669. I can see Iris Flavia jumping up and down as I believe that King Henry II (the Lion) started the league. 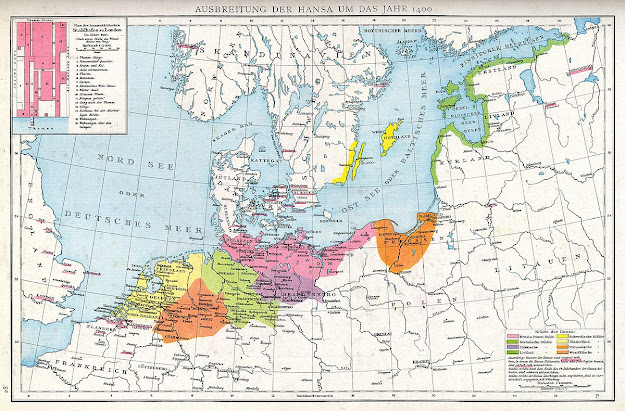 This, on economic bases set up organization, actually was performing until XVII century. In the middle ages such trading-political union was necessary to protect land against unexpected military assaults by the Vikings, as well from the potential piracy. North Germany towns due to this union fast become the dominant economic force in Baltic Sea region and Lübeck – trading center, which was joining Baltic and Scandinavian countries. 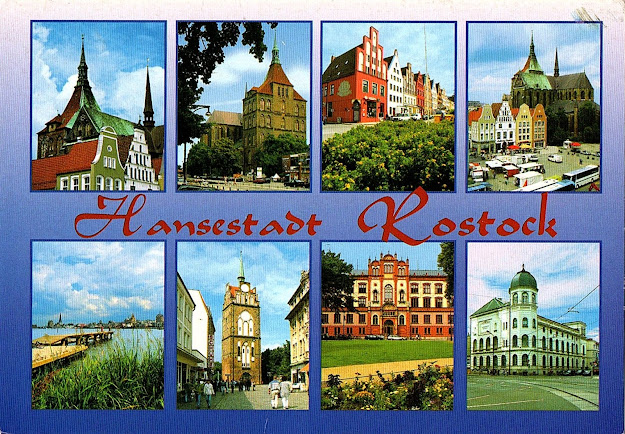 Bremen and Hamburg as well as Hannover were hanseatic cities. I always can tell by the car number plates. (They have that extra 'H'). HH is Hansestadt Hamburg, and HB is Hansestadt Bremen. Rostock has the letters HRO for that reason.
What have I been up to this week?  I walk twice a week with my friend, but I didn't go on Friday as I was tired and slept in. I did go shopping in the village and I spotted this window above the fruit shop. (I'd never noticed it before). 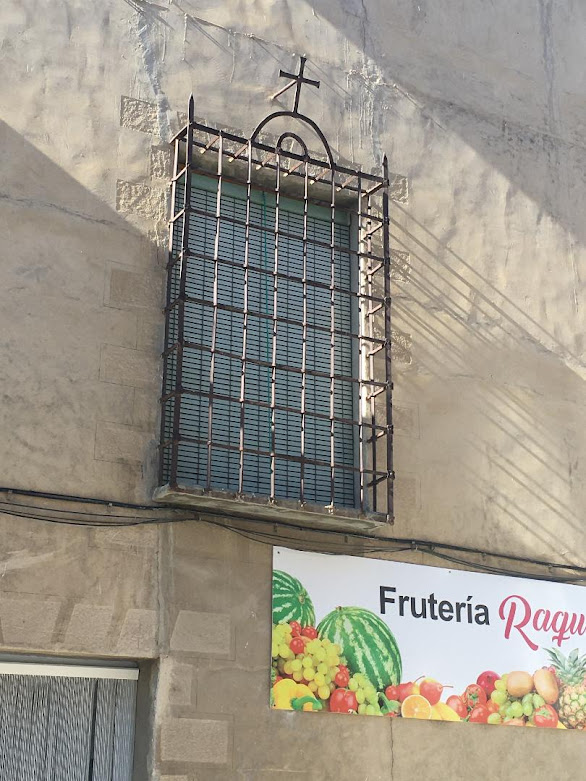 I have been trying out my new oven, and I made these small yoghurt cakes. One small pot of plain yoghurt, 3 pots of flour (using the same yoghurt pot as a measure, rinsed and dried of course), 2 pots of sugar and 1 of oil, 1 sachet of baking powder and 3 eggs. I also add some drops of coconut flavoring, and I also put some in the icing. Some dried coconut on top. Done. I cut them in squares and took them to our worship meeting and they disappeared in no time! 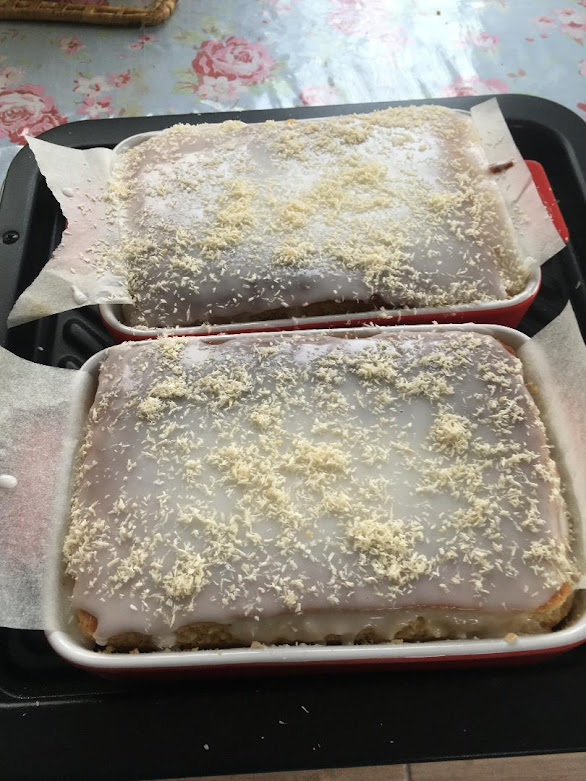 Yesterday's walk included a climb onto a hill, from where we had a beautiful view: 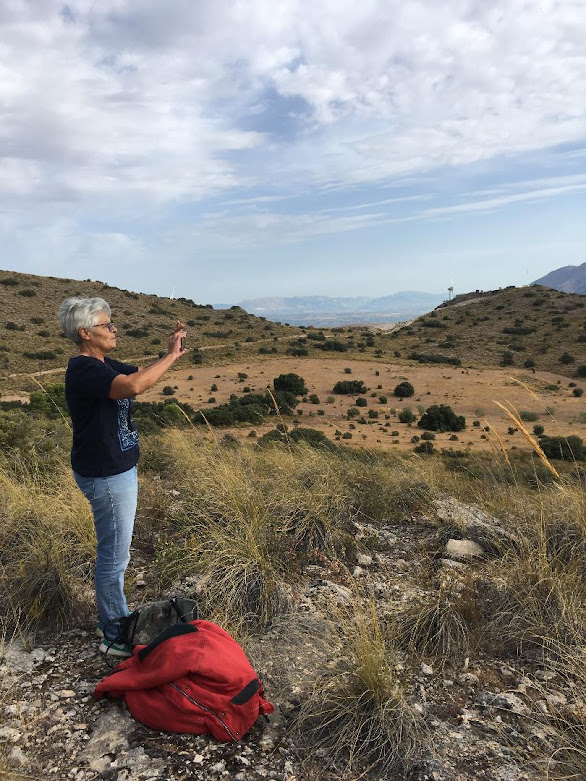 I had been looking for juniper berries as I need some for a recipe. But they are all dried and discolored. I picked some anyway, hoping that they will have some flavour. 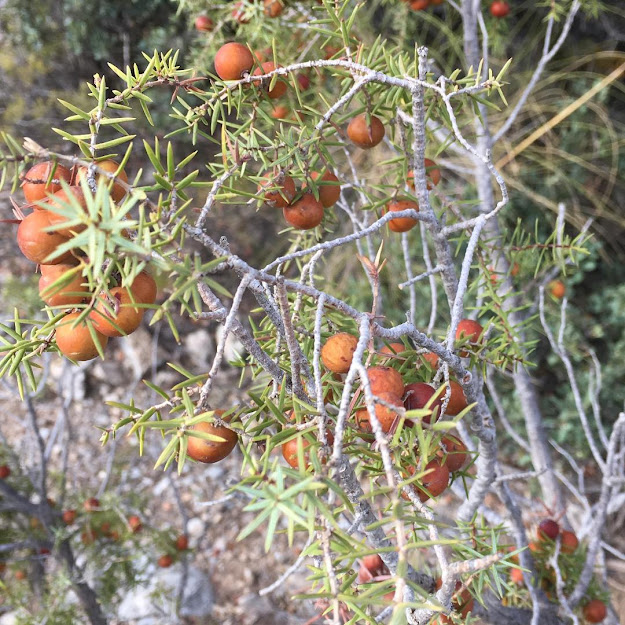 We had a 360 degree view. Very beautiful. 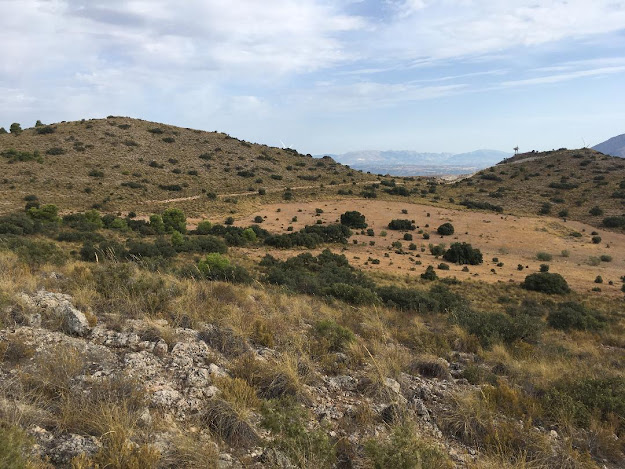 Another concoction in my new oven. A savoury bread. I used the steam shot function three quarters through the cooking time. 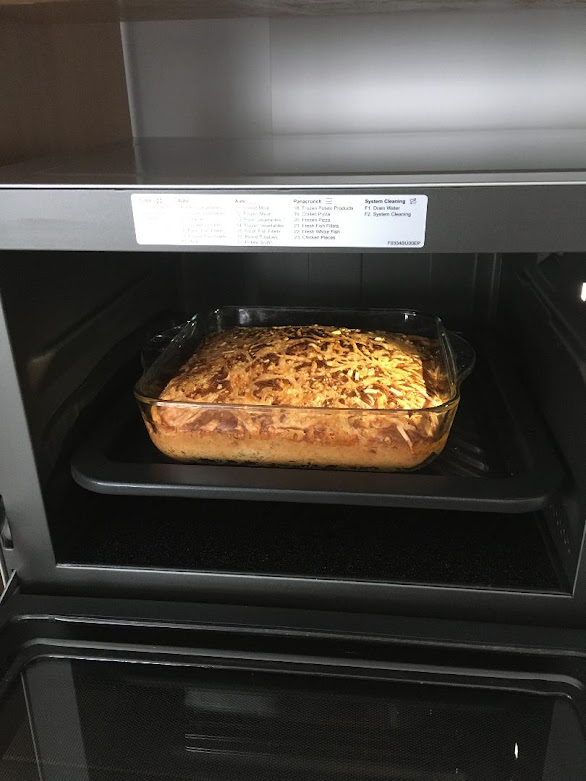 Our little bit of land where hubby grows his veggies, is not next to the house. It is in the valley. He is building a shed to keep his tools and equipment, so some building materials were delivered this week. It was awesome to watch the lorry negotiate the dry riverbed and the track to our land. In the photo you can see the lorry. Our land is to the left of the lorry, but I photographed it before it turned left and would disappear behind the trees. 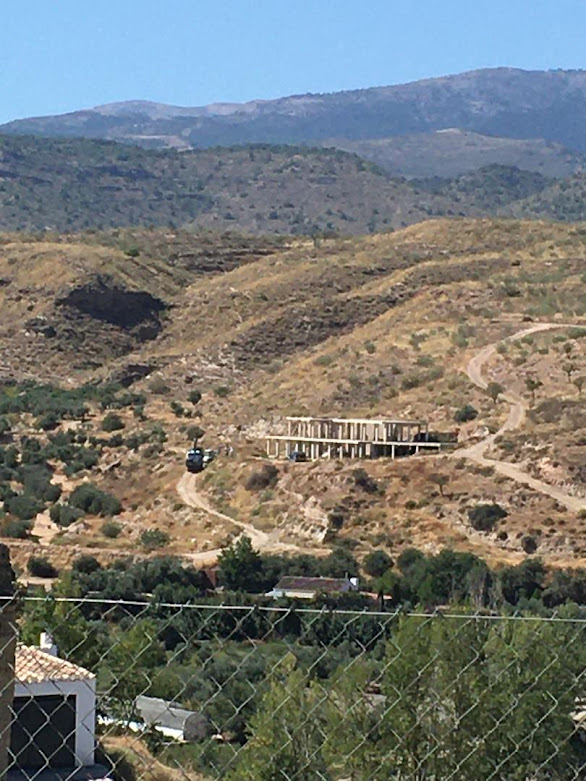 A highlight this week was the visit to our friends in a nearby village. They have several abandoned houses near their house, and as that is the theme of this month's photo club entry, we combined the photo shoot with a visit. She had some lunch ready for us. Spot my glass of white wine! 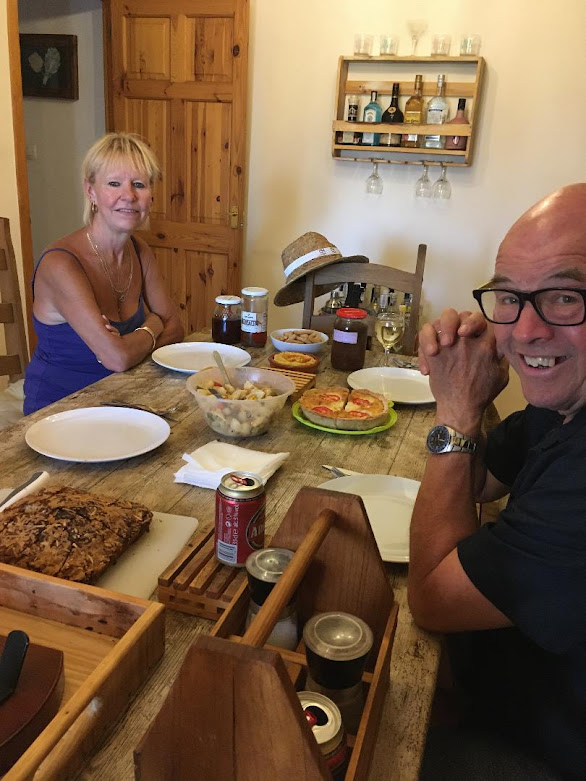 And he had made a carrot cake. Here it is with my cup of coffee. 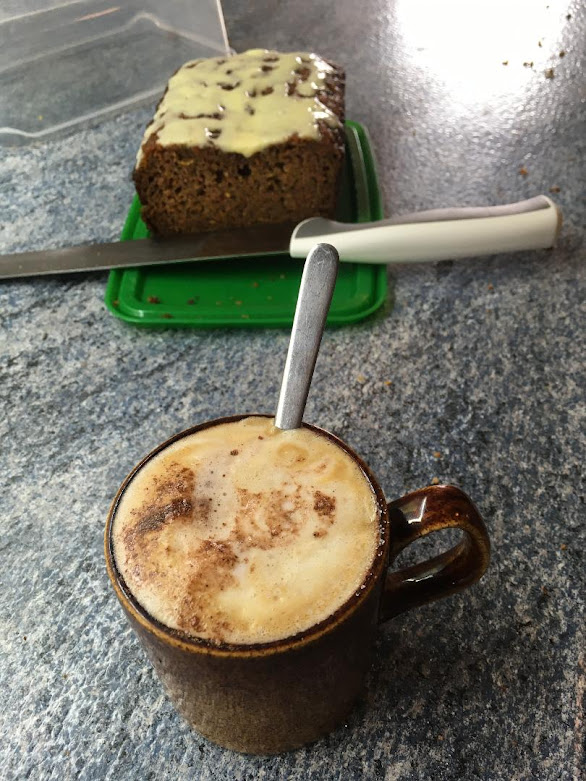 On Wednesday, we went into town to collect the new tire hubby had ordered. Down the road on the left hand side is some writing. It says: Plaza De Las Eras (square of the eras). Right at the bottom (by the tree) is the ice cream shop, where we were heading. 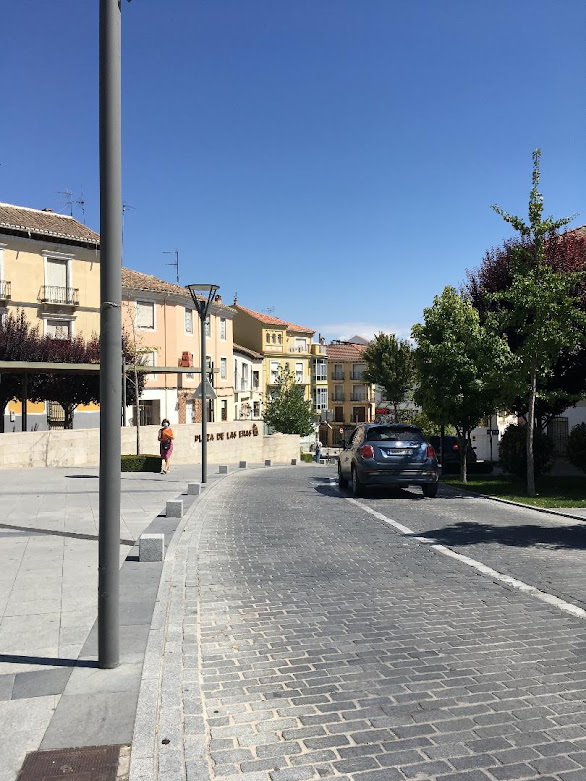 It's not so clear on the photo but this is a water feature. Water runs through the gully in between the two 'walls'. It makes a pleasant noise too. 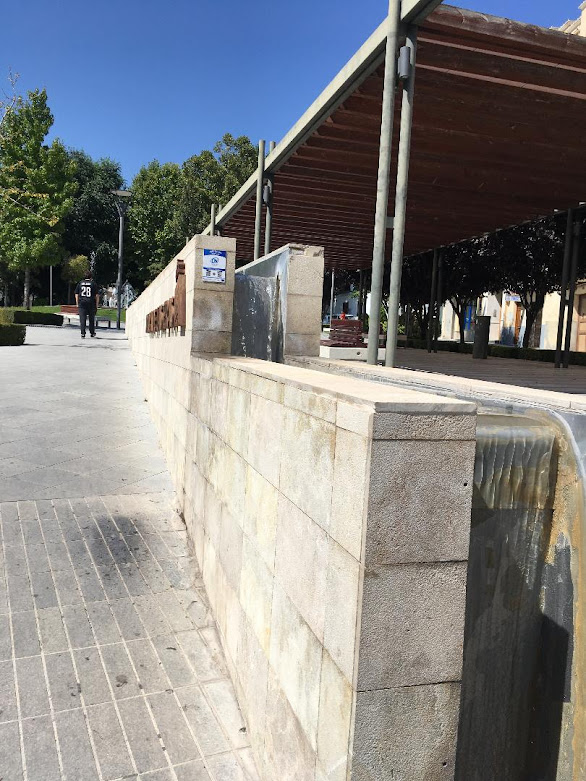 We treated ourselves to some lovely ice cream at our friends' ice cream shop.. 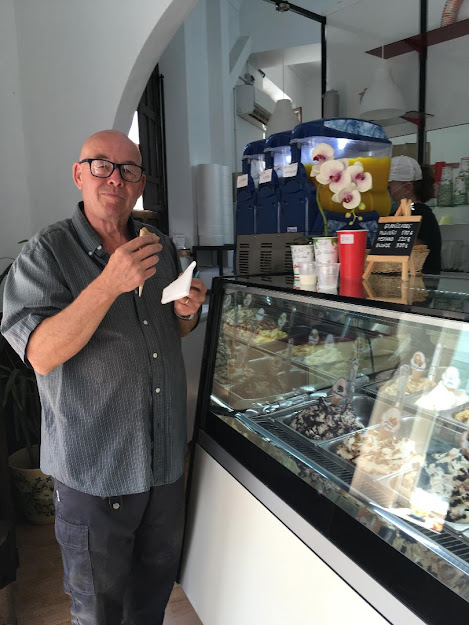 I've come to the end of this blog post. I hope to see you all at the T-Party. Visit Elizabeth and leave her some love.
Happy T-Day,
Hugs,
Lisca
Posted by Lisca at 00:33