A Postcard A Day - Tuesday 3 August 2021 - Seascapes, Pastis and the American library in Paris.

Hello lovely ladies, Here we are again on our way to the T-Party. Have you got your drinks ready? Then we can visit Elizabeth and Bluebeard who kindly host this party.

I'm going to start with my drink: 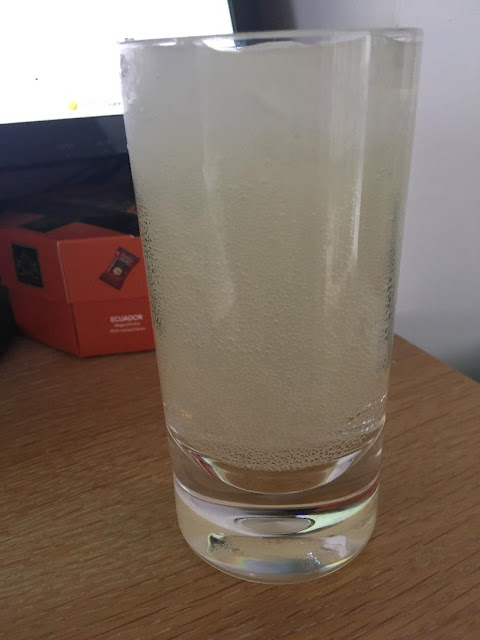 It's my drink of Pastis which I like to drink on a warm evening. It's a colourless liquor, but when water is added, it goes cloudy. It has an aniseedy taste, a bit like the greek Ouzo. I like it with ice cubes and a bit of fizzy water. Very refreshing.
I have never seen it in a bar over here, so I have my own bottles: 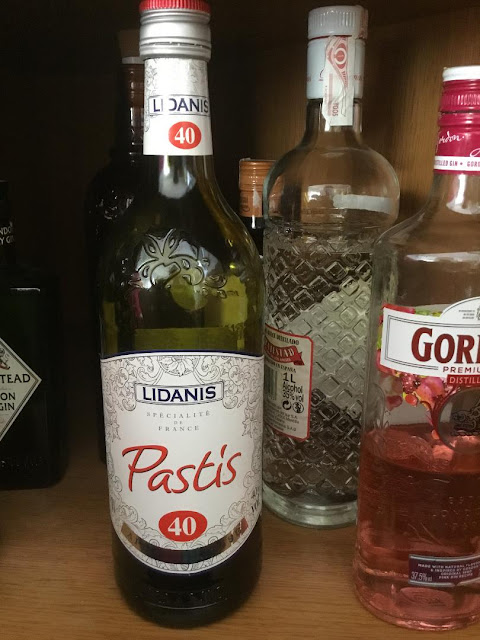 There is this big one litre bottle, and then I have this tiny bottle. 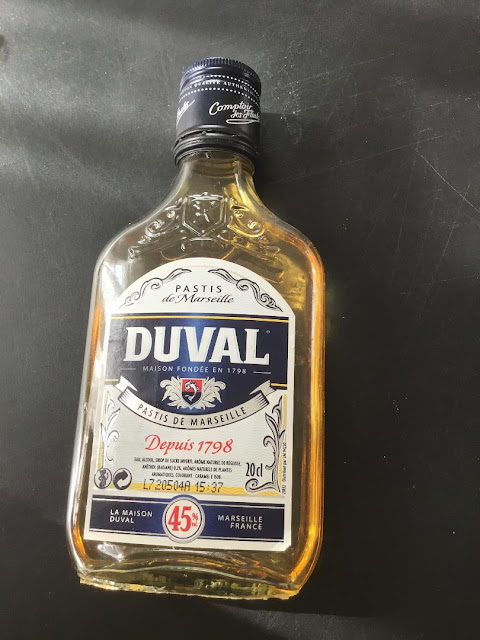 I bought them a few years ago on one of our travels. Because I don't drink a lot, these bottles will last me for a good few years.
Now we get to my postcards. Yes, I have two around the same theme: Seascapes. 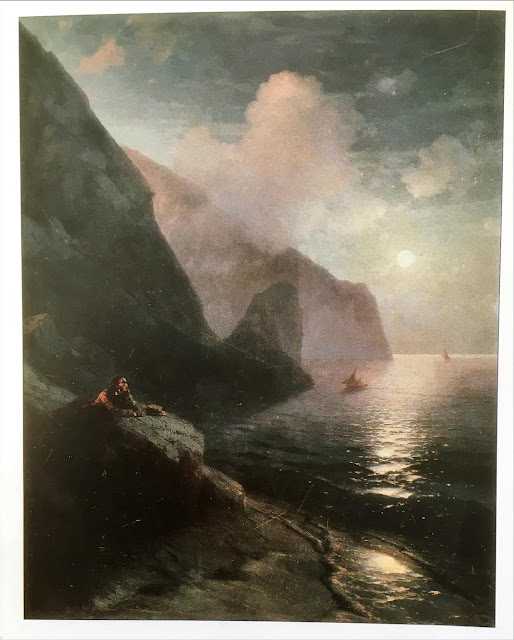 This painting is entitled 'Pushkin in the Crimea at the Gurzuf rocks' and was painted by the artist Ivan Aivazovsky in 1880.

Alexander Sergeyevich Pushkin  6 June  1799 – 10 February 1837) was a Russian poet, playwright, and novelist of the Romantic era. He is considered by many to be the greatest Russian poet, and the founder of modern Russian literature. Pushkin was born into Russian nobility in Moscow. His father, Sergey Lvovich Pushkin, belonged to Pushkin noble families. His maternal great-grandfather was Central-African-born general Abram Petrovich Gannibal. He published his first poem at the age of 15, and was widely recognized by the literary establishment by the time of his graduation from the Tsarskoye Selo Lyceum. Upon graduation from the Lycée, Pushkin recited his controversial poem "Ode to Liberty", one of several that led to his exile by Tsar Alexander I of Russia. While under the strict surveillance of the Tsar's political police and unable to publish, Pushkin wrote his most famous play, the drama Boris Godunov. His novel in verse, Eugene Onegin, was serialized between 1825 and 1832.

I found it very interesting to read that Pushkin had African ancestry.

Abram Petrovich Gannibal, also Hannibal  c. 1696 – 14 May 1781, was a Russian military engineer, major-general, and nobleman of African origin. Kidnapped as a child, Gannibal was taken to Russia and presented as a gift to Peter the Great, where he was freed, adopted and raised in the Emperor's court household as his godson.

Gannibal eventually rose to become a prominent member of the imperial court in the reign of Peter's daughter Elizabeth. He had 11 children, most of whom became members of the Russian nobility; he was a great-grandfather of the author and poet Alexander Pushkin.

Here is the other postcard: 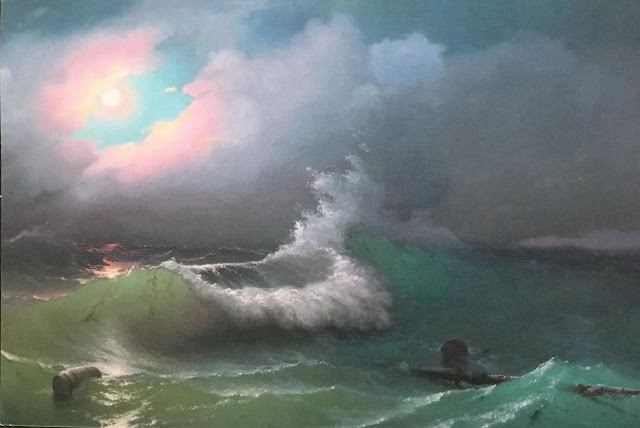 Again it is by the same painter, Ivan Aivazovsky. It is called 'After the storm' and I have not been able to find a date for this painting.

Ivan Konstantinovich Aivazovsky 29 July 1817 – 2 May 1900) was a Russian Romantic painter who is considered one of the greatest masters of marine art. Baptized as Hovhannes Aivazian, he was born into an Armenian family in the Black Sea port of Feodosia in Crimea and was mostly based there.

Following his education at the Imperial Academy of Arts in Saint Petersburg, Aivazovsky traveled to Europe and lived briefly in Italy in the early 1840s. He then returned to Russia and was appointed the main painter of the Russian Navy. Aivazovsky had close ties with the military and political elite of the Russian Empire and often attended military maneuvers. He was sponsored by the state and was well-regarded during his lifetime. The saying "worthy of Aivazovsky's brush", popularized by Anton Chekhov, was used in Russia for describing something lovely. He remains highly popular in Russia in the 21st century.[3]

One of the most prominent Russian artists of his time, Aivazovsky was also popular outside Russian Empire. He held numerous solo exhibitions in Europe and the United States. During his almost 60-year career, he created around 6,000 paintings, making him one of the most prolific artists of his time. The vast majority of his works are seascapes, but he often depicted battle scenes, Armenian themes, and portraiture. Most of Aivazovsky's works are kept in Russian, Ukrainian and Armenian museums as well as private collections.

Here is a self portrait of the painter: 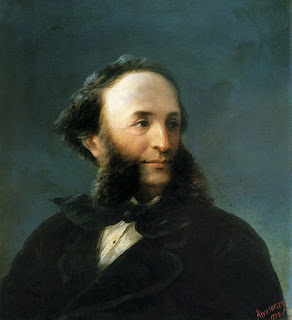 The person who sent me this postcard lives in Feodosiya and he mentioned that this year they will be celebrating that the city is 2550 years old.
Now the stamps are interesting. The two stamps on the left are Russian and the stamp on the right is Ukranian....

Apparently Russia annexed the Crimea (which was part of the Ukraine) in 2014.

The Crimean Peninsula, north of the Black Sea in Eastern Europe, was annexed by the Russian Federation between February and March 2014 and since then has been administered as two Russian federal subjects—the Republic of Crimea and the federal city of Sevastopol. The annexation from Ukraine followed a Russian military intervention in Crimea that took place in the aftermath of the 2014 Ukrainian revolution and was part of wider 2014 pro-Russian unrest in Ukraine.

The Ukranian stamp on the right features the Gorodetsky House in Kiev. I love the story that goes with it: (Sorry the translation is iffy but you get the idea)
From the Kiev Tours website: House with Chimaeras or Gorodetsky House or House of Mad Architect was built during 1901-1903 years by architect Vladislav Gorodetsky. This is the first house built in Kiev with using of cement. At the time - a great advertising for cement as a new material which was just beginning to use in construction of houses. 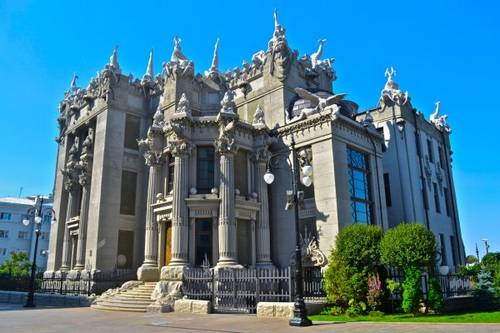 Architect Vladislav Gorodetsky was a co-owner of the first cement plant "FOR" in Kiev and among the sources of personal income were dividends which he received as a major shareholder.
When Vladislav Gorodetsky announced its intention to build a house on a very steep hill he bet that in two years there will be his own home. Then the famous Kiev architect Alexander Kobelev put his hand to forehead of Vladislav Gorodetsky and with emotion said: "You, sir, mad. Only a madman could come up with such an idea". But Vladislav Gorodetsky won the betting.
For strengthen the stability of the slope was hammered almost 50 concrete piles to a depth of 5 meters. With one hand at the house of three floors on the other hand - six! On each floor of the architect created a large private apartment and on the first floor - two small.
The house has been carefully designed in accordance with the progress of the sun. Windows of children's rooms and bedrooms are heading the south-west. In the south-east facade are windows of those who had to wake up at first light - cooks and waiters. In the afternoon sun shone in the office and living room. On the semi-circular balcony owners could admire the view of sunset.
The tourist office says the house is no longer open to the public as one of the apartments is occupied by the president of Ukraine.
Now I hop from a house in Kiev to a library in Paris: 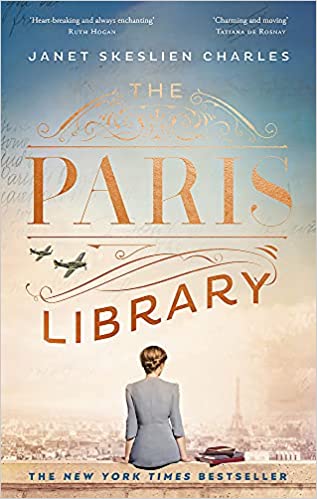 I have just finished reading this book. It's based on a true story and is set at the beginning of the second WW. There is a protagonist Odile, who works in the American Library in Paris, and every now and then it switches to 1983 where a girl called Lily has an elderly neighbor called Odile. The book is about how Odile's life changes when Paris is occupied by the Germans.
Here is a photo of the American Library in Paris: 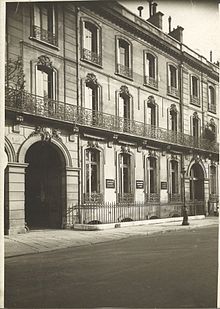 Google Books writes:
An instant New York Times, Washington Post, and USA TODAY bestseller—based on the true story of the heroic librarians at the American Library in Paris during World War II—The Paris Library is a moving and unforgettable “ode to the importance of libraries, books, and the human connections we find within both” (Kristin Harmel, New York Times bestselling author).
This is the Reading Room, also featured in the book: 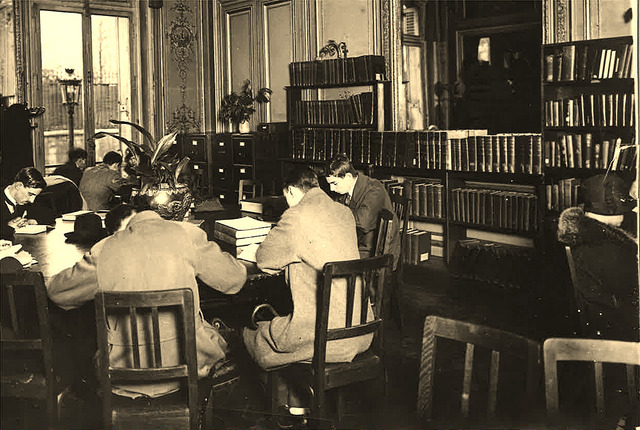 Paris, 1939: Young and ambitious Odile Souchet seems to have the perfect life with her handsome police officer beau and a dream job at the American Library in Paris. When the Nazis march into the city, Odile stands to lose everything she holds dear, including her beloved library. Together with her fellow librarians, Odile joins the Resistance with the best weapons she has: books. But when the war finally ends, instead of freedom, Odile tastes the bitter sting of unspeakable betrayal. 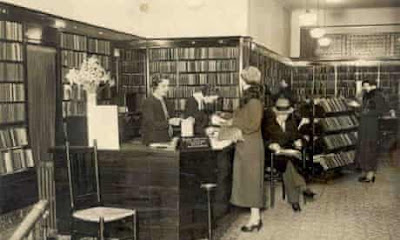 Montana, 1983: Lily is a lonely teenager looking for adventure in small-town Montana. Her interest is piqued by her solitary, elderly neighbor. As Lily uncovers more about her neighbor’s mysterious past, she finds that they share a love of language, the same longings, and the same intense jealousy, never suspecting that a dark secret from the past connects them.
Apart from Odile (and Lily), The directrice of the library, Dorothy Reeder features a lot. She really existed: 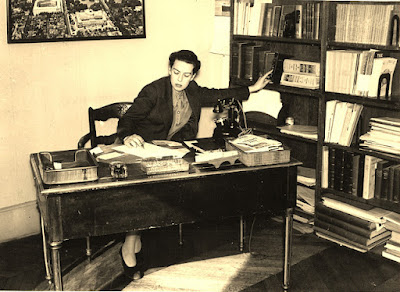 She hid old and precious manuscripts in the safe to keep them from being looted.
And there was the Countess de Chabrun, who worked at the library and who also was a real person: 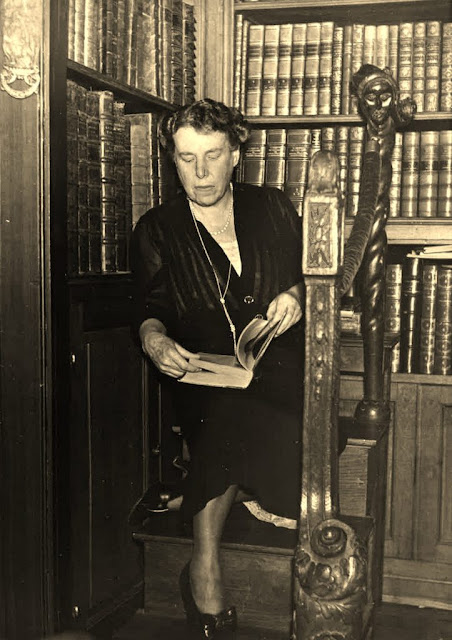 Eighteen months after Paris falls to the Nazis, Dorothy Reeder leaves France for America and is replaced by the Countess de Chambrun. In her memoir, Chambrun recalls the power transfer: “Miss Reeder […] left on the desk which was to become mine, a card solemnly delegating me to fill her place together with the verbal encouragement: ‘Of course you will never be able to keep open’.” The unfolding of events will prove her wrong.
I liked it very much as I didn't know much about France during the WWII. The library did a lot for the war effort. They organized books for soldiers at the front and when the Germans forbade jews from coming to the library, the staff would secretly deliver them personally.
A fascinating book. I can recommend it.
That is it from me today. I hope you enjoyed this post (I'm afraid it was a bit long)
Happy T-Day,
And have a good week too.
Take care,
Hugs,
Lisca
Posted by Lisca at 00:03