Good morning lovely ladies. Pour yourselves a nice cup/glass of something as I have a lot of things to show you.

My postcard for today comes from Russia: 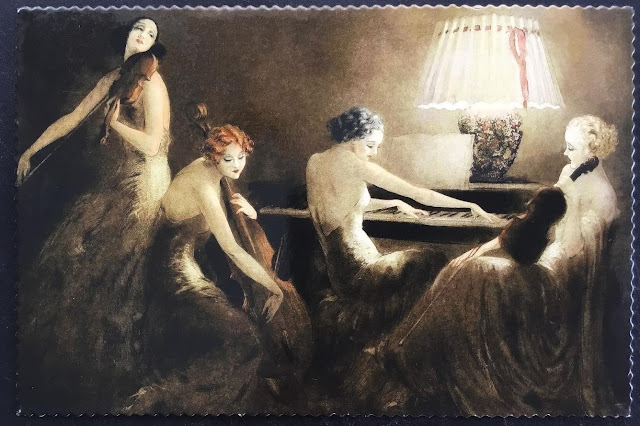 It is an art deco painting by Luis Icart (1880-1950). He was born in Toulouse, France and he became an accomplished illustrator, graphic artist and painter. According to Wikipedia:
Icart participated in the First World War as a fighter pilot. During this time he made countless sketches and etchings with patriotic themes. On his return, he made prints of his work, mostly using aquatint and drypoint etching. Because of the great demand, he often published two versions, one for the European and another for the American market.
In the late 1920s, Icart was very successful both artistically and financially with his publications and his work for large fashion and design studios.[3] The popularity of his etchings peaked in the Art Deco era.[4] Icart depicted life in Paris and New York in the 1920s and 1930s in his own style of painting. Success in 1930 enabled him to buy a magnificent house on the Montmartre hill in the north of Paris. In 1932 Icart showed in the New York Metropolitan Galleries a collection of paintings entitled Les Visions Blanches, which received little attention however, because he did not personally accompany the exhibition.

After the German western campaign, Icart turned to more serious issues. With L’Exode, he created a series of works that document the horrors of the occupation of France in World War II from 1940 onwards. During this time, Icart had to flee Paris and leave behind some of these works, which were only rediscovered in the attic of a Paris art academy together with some of his earlier works in the 1970s.

Icart died in his Parisian house in 1950.

But you ladies will be most interested to know that he often painted women with cats.

Here are the stamps: 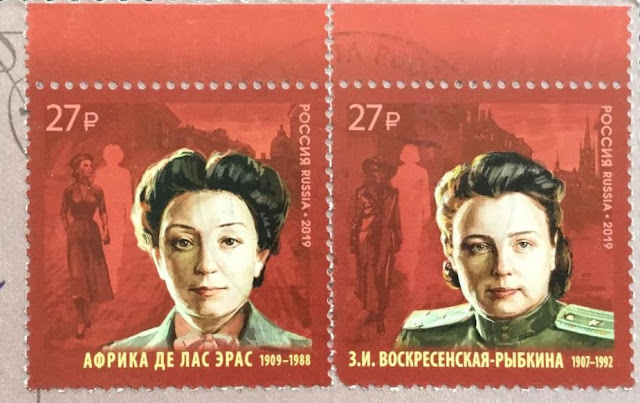 The stamps were released to celebrate 100th anniversary of the Russian (Soviet) foreign intelligence.
It wasn't easy to figure out the names of these obviously important women. But I found out the lady on the left was called Africa de las Heras, and she was Spanish!
As you know, I love to read about women who have had interesting lives, irrespective whether I agree with their lifestyle, beliefs or politics. Here is a woman who obviously strongly believed in what she was doing and did it well by all accounts. Have a read if you are interested (or skip).
Africa de las Heras Gavilán was born in Ceuta on April 27, 1909. She came from a wealthy family. As a child, they moved to Madrid and Africa began studying at a nuns' college.
In 1930, when Africa was 21 years old, her father died in Jaca, he was a military man and was shot when containing a republican rebellion.
That same year, she appears as a militant and actively participating in the Communist Party of Spain. Later she participated in the October 1934 Revolution in Asturias, where she met Santiago Carrillo, two years later she entered the Catalan Unified Socialist Youth and a year later she directed one of the citizen patrols of Barcelona, ​​where she carried out various clandestine actions. 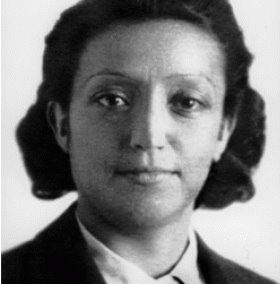 Later she married the prisoner Luis García Lago, a former banker and communist activist, whom she was going to visit in jail. That same year she returned to Ceuta for the last time to warn her uncle, who was the mayor of the city, of the danger he was running.
In 1937 she was recruited by NKVD agents in Spain and sent to Moscow to train.
The person in charge of introducing her into the espionage was Caridad Mercader (mother of Trotski's murderer, Ramón Mercader).
After training, she went to Norway to fulfill her first mission: infiltrate Trotsky's team , become his secretary and travel with them to Mexico.
There she dedicated herself to passing information to the NKVD, helping Ramón Mercader organize the assassination of Trotsky by order of Stalin 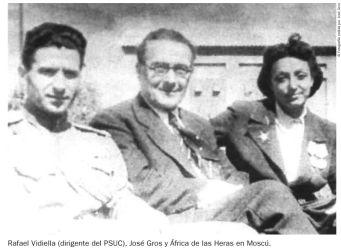 She left Mexico hidden in the hold of a ship and in 1941 arrived in the USSR, where she studied nursing and radiotelegraphy. Later, she was appointed head of radio broadcasting. In 1942 she was sent to the Los Vencedores guerrilla detachment .

She parachuted into the Ukraine to intercept communications and send erroneous messages to the Germans.
In 1944, after two years of guerrillas, she returned to Moscow, where in the KGB she received new training in espionage.
At the end of the Second World War she began her work as a KGB agent, using the nickname "Patria” (Homeland). In 1946 she moved to Paris under the name of María Luisa de las Heras posing as a refugee from the Franco regime. Then she met the Uruguayan writer Felisberto Hernández , whom she married the following year. Then, she was assigned to Montevideo, Uruguay, where she worked as a dressmaker as a front. In 1950 the marriage separated without her husband knowing the true profession of Africa.

In 1956 she travelled to Buenos Aires to act as a liaison for the chief of espionage in the Southern Cone, marrying him by order of the KGB. The couple started an antique business as a cover.
In South America, she carried out numerous missions, serving as a link between the different spies and the headquarters in Moscow. It is believed that she was the one who relayed the information on the Bay of Pigs invasion to the KGB. 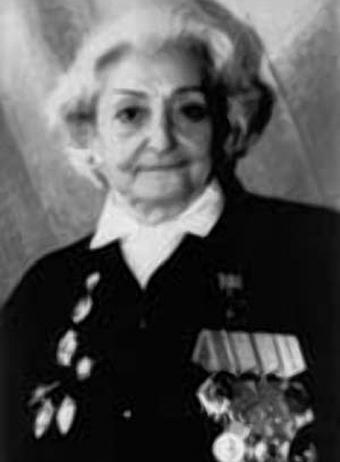 In 1967 her husband died under strange circumstances and she returned to the USSR, carrying out new missions abroad until 1971, when she was assigned to train new agents at the KGB headquarters for operations in Spanish-speaking countries.

She died in Moscow on March 8, 1988 due to heart problems. She was buried with military honors in the Moscow Kuntsevskoe cemetery, on whose tombstone the word Patria appears written in Spanish along with the text " Colonel Africa de las Heras, 1909-1988" in Russian.
She is buried next to the grave of Ramón Mercader, the murderer of Trotsky, and Kim Philby, the famous British double spy. 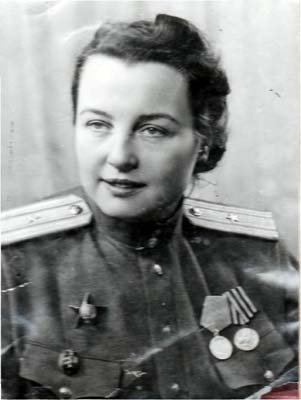 She was a Soviet diplomat, NKVD foreign office secret agent and, in the 1960s and 70s, 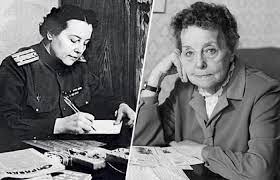 and a popular author of books for children. A USSR State Prize laureate (1968), Voskresenskaya was best known for her novels Skvoz Ledyanuyu Mglu (Through Icy Haze, 1962) and Serdtse Materi (A Mother's Heart, 1965). In 1962–1980 more than 21 million of her books were sold in the USSR. 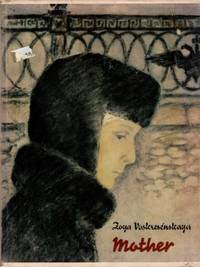 In the late 1980s, as Perestroika incited the wave of declassifications, Zoya Voskresenskaya's story was made public. It transpired that a popular children's writer was for 25 years a leading figure in the Soviet intelligence service's foreign department. Voskresenskaya's war-time memoirs Now I Can Tell the Truth came out in 1992, 11 months after the author's death.

Today is Tuesday, the day when the lovely ladies of the T-gang come together at the T-Party hosted by Elizabeth and Bluebeard. All that is needed to participate is a beverage or reference to a beverage. I always have loads of drinks and food too. I will limit myself to one today: 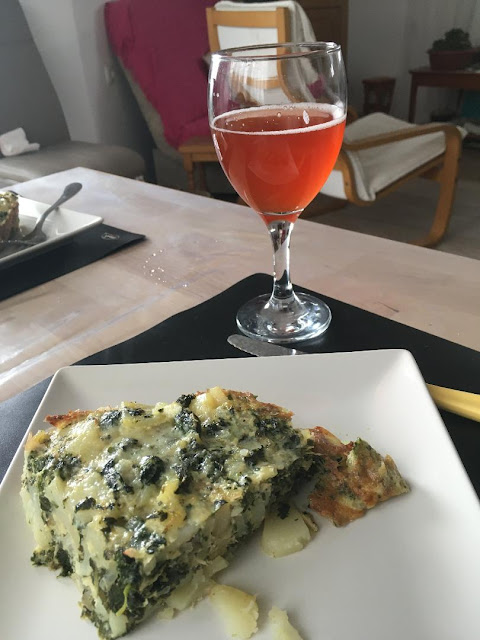 That is a glass of raspberry kombucha that we like to drink with our meal. Yesterday's lunch was a Spanish Tortilla de patates. It might not look like a tortilla, but I like to add spinach to my tortilla so it becomes a balanced meal (potatoes, eggs and veg) 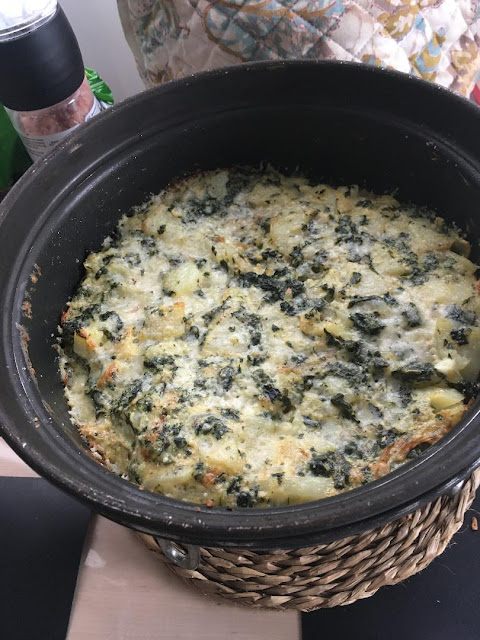 I'd like to finish with something that is on my mind a lot ( and perhaps on some of yours too): the women in Afghanistan. And I am wondering what has become of Shamsia Hassani, the Afghan graffitti artist. I love her work and I secretly hope she has been able to leave the country somehow.
For those who don't know her work, here are a few images: 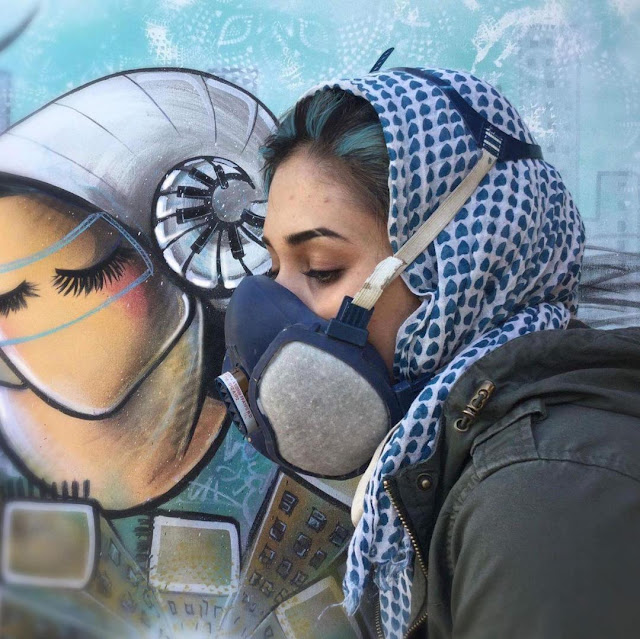 This is Shamsia at work (with special mask as she works with spray cans). 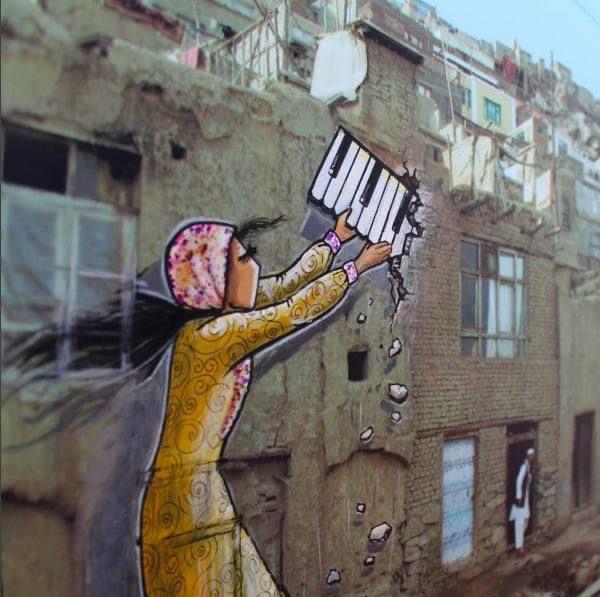 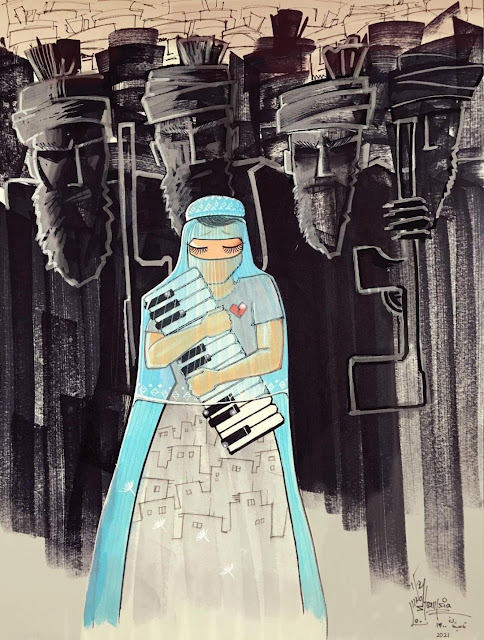 'Nightmare,' published August 9, as the Taliban rapidly took control of a large part of Afghanistan. 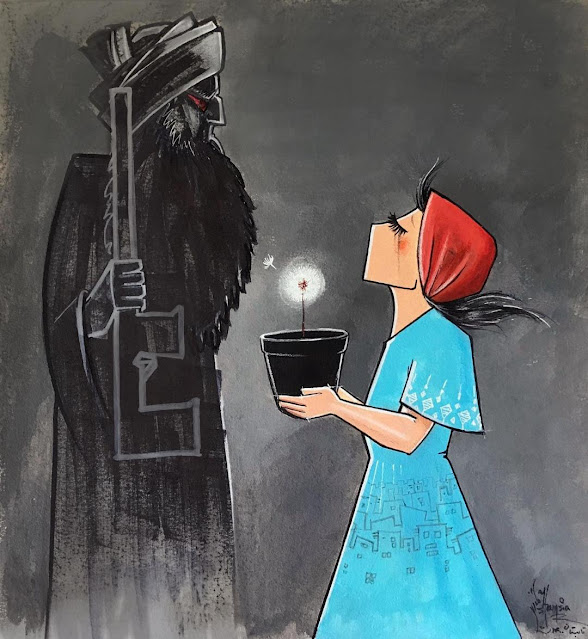 'Maybe it is because our wishes have grown in a black pot,' published August 14, just before Kabul fell to the Taliban 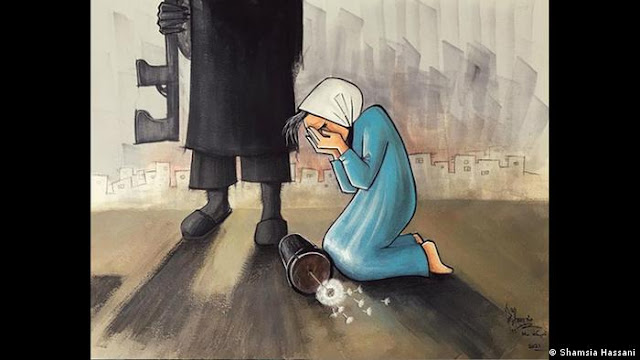 'Death to Darkness,' her latest piece, published after the Taliban had taken control of Afghanistan 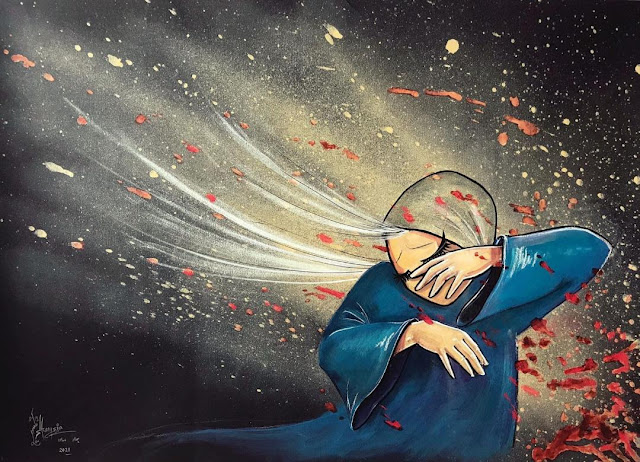 She had traveled to do on-site murals and participate in residencies and gallery exhibitions in numerous North American, European and Asian countries. "I use them [music instruments] as a symbol for women to play her voice with it. She can use musical instruments to talk with people, to speak louder and [get] more attention, as she has no mouth. But this musical instrument gives her power to speak in society," Hassani said in 2018. 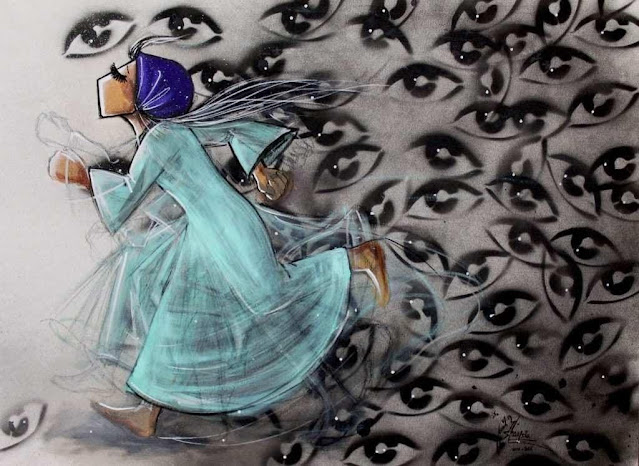 With her recent images, she is publicizing the plight of women and girls in Afghanistan and helping to ensure they are not forgotten. 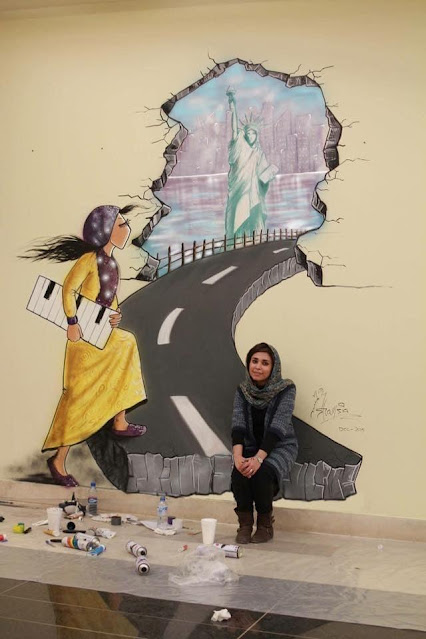 That is it from me today.
Do come and join us (@Altered Book Lover) with a beverage. You don't have to be a member, just turn up and join us. We like to see newcomers.
Happy T-Day to all,
Hugs,
Lisca
Edit: There seems to be some confusion about the 'Tortilla de Patates'. A tortilla in Spain is something totally different to a tortilla in America. Here in Spain it is a fat ommelet with potatoes in it. I found out it is called a Spanish Omelet in English. 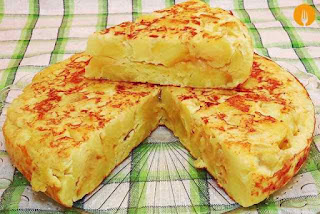