We have a certain routine to our lives as we are retired, but often break away from the routine and  that is a good thing. But this past week it caused  a bit of havoc. We normally go to our weekend home on Monday night and stay over, have lunch at the restaurant, come home, I phone my mother in Holland, we have a cup of tea and then go to the prayer meeting. Well this week I wanted to go to the market (on Tuesday) and so we didn't go to our weekend home.  I totally forgot to write and post my Tuesday blog, neither of us remembered to go to the prayer meeting and needless to say, I didn't phone my mum. She doesn't mind, and knows I will phone her the next day. But because I didn't do a blog either, she got a bit worried. Oh dear! It's what in England is known as a senior moment. In my case it was a Senior Day!

I have a lot to show you as I now have to cover two weeks!
First off are the postcards. This one is a map of Lithuania. It was sent to me by Olegas from Kaunas, the second largest city in Lithuania. 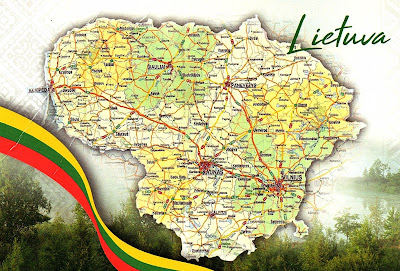 The yellow, green and red banner represents the national flag.
He has used several stamps, and they are beauties:

The top three look like Christmas stamps and the ones below are flags.  The red one is the presidential standard, and the lighter one below shows the Lithuanian coat of arms 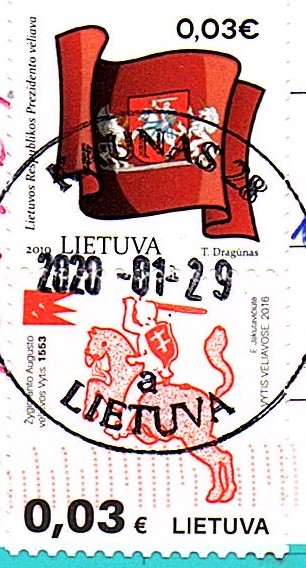 The second card comes from Portugal. It is a beautiful photo by photographer Maricruz Suarez in 2010. It features the Rua Agosta Triumphal Arch in Lisbon. 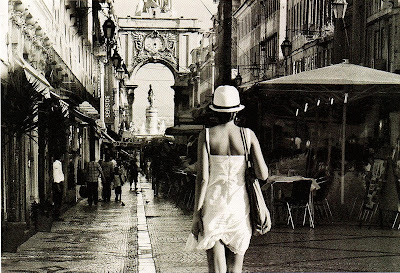 This is another photo of the arch from the internet: 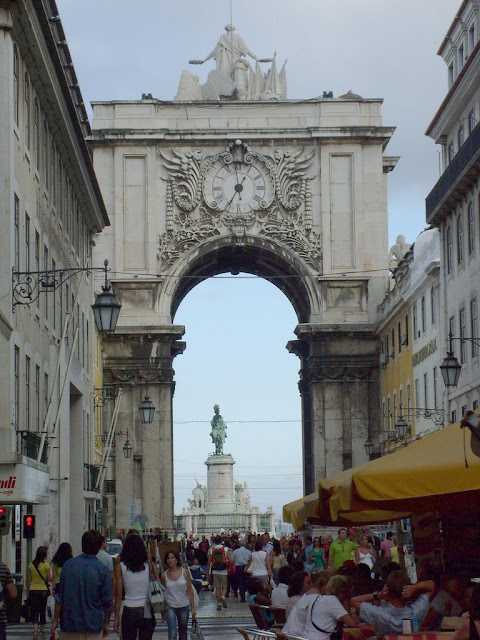 The stamps are gorgeous. The one on the right celebrates the Centenary of the Directorate General for Livestock Services. 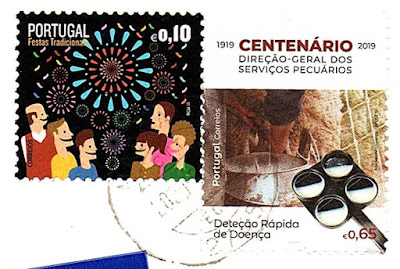 Now I would like to show you some images from my trip to Almería city. It was organised by our photo club AFoCa (Photo association Caniles).
After a two hour journey in a minibus, we arrived in Almería and we all stretched our legs and tucked into our breakfasts that we had brought. 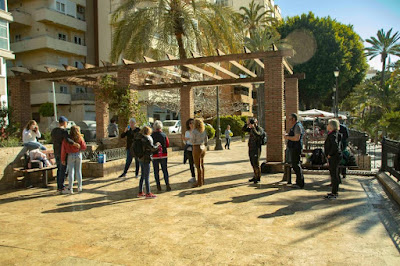 A quick group photo outside the Andalucian Centre for Photography. 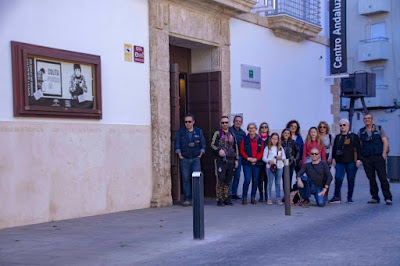 We were visiting an exhibition about Catalan photographer Colita. (Google her if you want to know more). 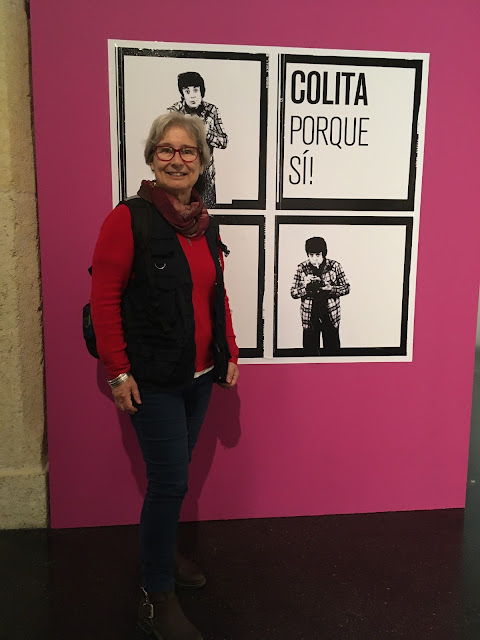 It was a very interesting exhibition with photos from the 60s and 70s. I enjoyed it very much. 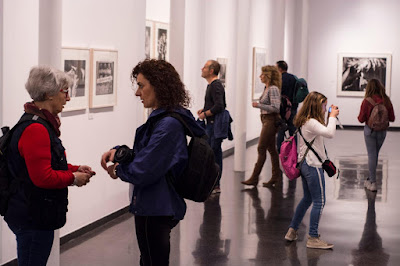 Then we went for a stroll along the boulevard. This stylised little man is called Indalo and it is the symbol of Almería. 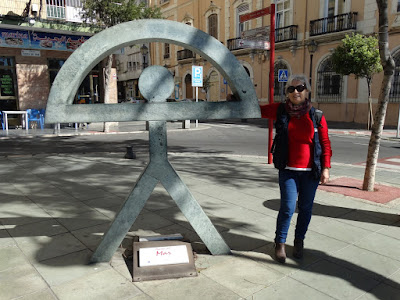 I rather liked this building. I do like architecture. 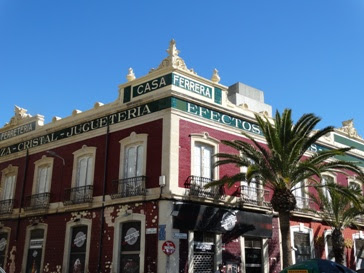 When in Almería, you can't miss the English Pier. I have found some info on the internet and I want to give credit to Fioina Flores-Watson, who wrote this bit.

An extraordinary piece of industrial heritage, this railway pier was the loading bay for the mines in Alquife (Granada), which produced iron ore, copper and silver. Its continuing survival despite over 100 years­­­­' constant exposure to the corroding effects of saltwater, is testament to the quality of construction.  As well as El Cable Ingles, the pier is also known as El Alquife.

(As you can see I have taken the photo in a way that the palm trees are evident, as Elizabeth loves palm trees.) 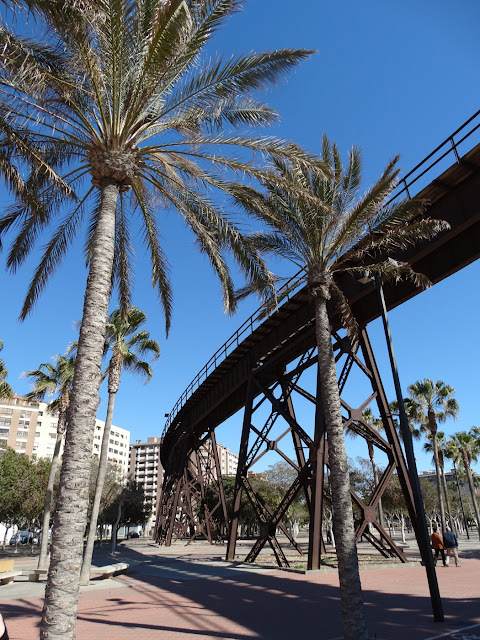 HISTORY OF THE PIER

The 1000-metre iron pier was designed and built in 1904 by Scottish engineers (the name seems inappropriate), following the school of Eiffel, for Glasgow-based The Alquife Mines and Railway Company. The railway was used until 1973 to transport minerals 90km by train from the French and British-run mines, and then onto the pier to waiting cargo ships, to be taken to northern Spain and abroad. 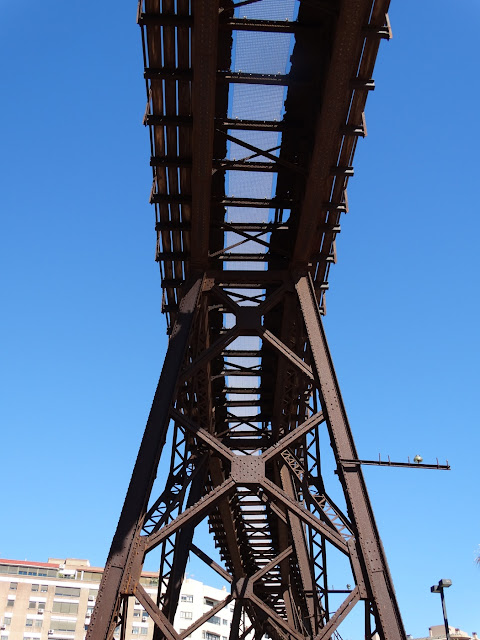 The trains could travel all the way to end of the pier, making a direct transfer possible into vessels docked alongside it, rather than having an intermediary transfer between the train and ship in the port. Loading an 8,000-ton ship would usually take 8-10 days; this system reduced the time to just 10 hours. 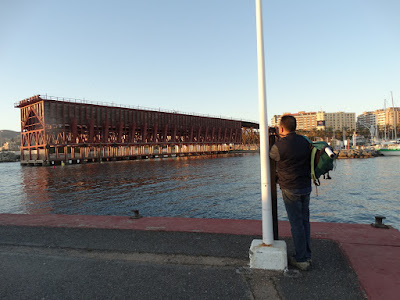 Next to the pier is a memorial to 142 Almerian Jews who died in Mauthausen concentration camp in Germany in 1939.

It reminded me a bit of the monument in Berlin, which has concrete blocks. 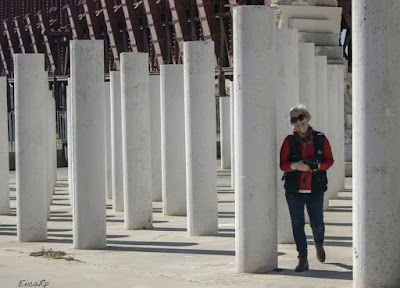 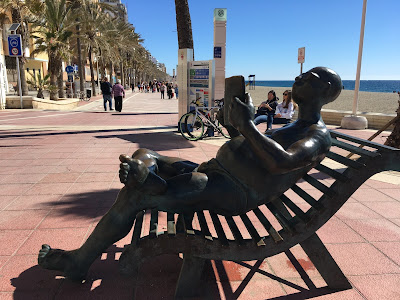 A little bit of eye candy. We saw these guys working out and I couldn't resist photographing them. 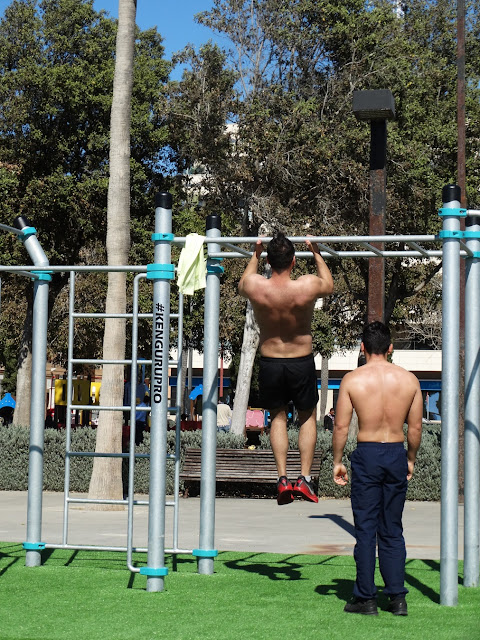 Here is my drink, Radler beer. It has lemon in it and is very refreshing on hot days. The plate is a tapa you get with every alcoholic drink. It is free. 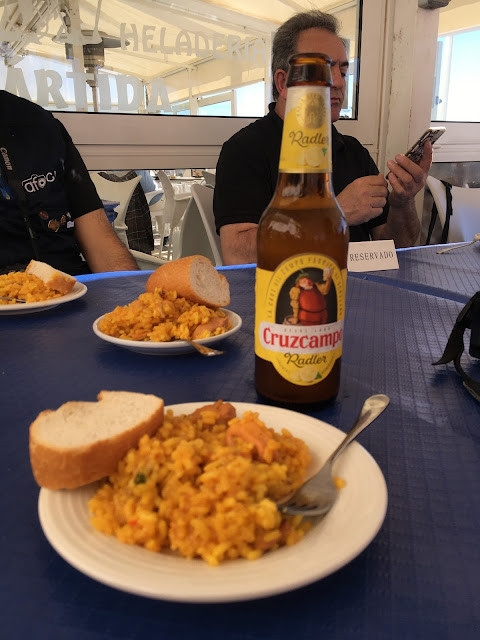 We all had lunch at a chiringuito (a beach restaurant) at 2 pm. We had so much fun, (and so much to eat) that we didn't leave until 5! Here you see the waiter showing us the desert menu. It was easier that way as there were 17 of us. 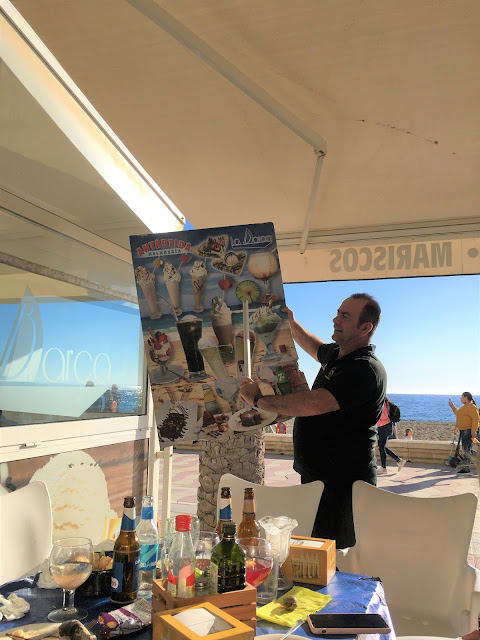 Then we went for another stroll along the beach and the harbour. Many of us wanted to photograph the sunset. 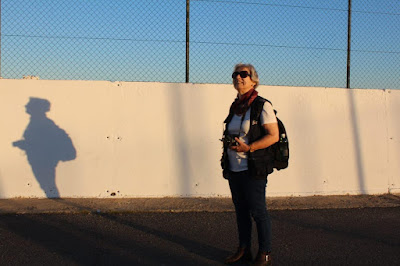 At 7 pm we were on our way home again. What a lovely outing it was!

Well done if you are still with me. That was a photo heavy blog post. But most importantly, it contained a drink, my qualifier for the T-Party hosted by Elizabeth and Bleubeard.
Come and join us!