Hello lovely peeps, It's Friday again. Time to recall the smiles in our week and share them with a link to Annie at A Stitch In Time.

We've been on holiday to Portugal to spend some time with one of our boys and his family. Our daughter-in-law's father is Portuguese and they have a lovely villa in the Algarve. The family were staying there and kindly invited us to spend a couple of days with them at the villa.

Coincidentally I received a postcard from Portugal the week before leaving. It is from Maria José and it shows the map of the country. 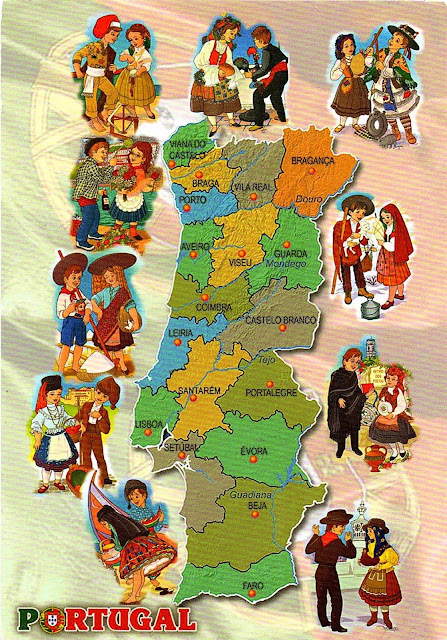 We were staying almost at the furthest south-west point of Portugal. (Between the letters A and L on the card).
The stamp is beautiful and depicts one of the most popular pastries of Portugal. Pastel de Tentúgal. It is one of the things I like about Portugal, all those luscious pastries! (Look at my Tuesday blog post to see our visit to a lovely oldie worldie tearoom). 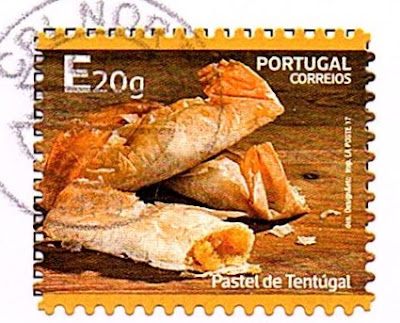 My second card comes from New York City  in the US. It hasn't got much written on it other than that there is a thunderstorm, so the sender has decided he/she will write some postcards. 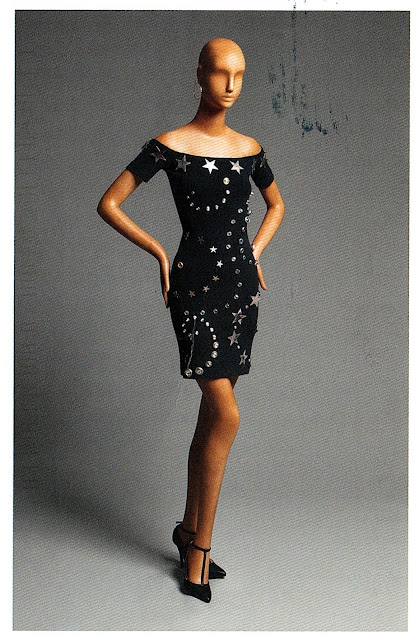 The image on the card is a dress from the 1989 spring/summer collection of fashion designer Patrick Kelly.
The '80s was a blast for everyone, but this designer in particular was not only having the time of his life, but making history as well. Patrick Kelly was an American designer from Mississippi, a facet he kept central to his brand throughout his career. He started in Atlanta, then moved to New York, starting his education at Parsons School of Design before moving to Paris. Kelly entered the Paris fashion scene in 1985 after being advised by his friend, the model and Black fashion icon, Pat Cleveland, to relocate and launch his career in the fashion capital. He is remembered not only for his whimsical, one-of-a-kind designs, but for his larger than life personality to match.
Let me show you some photos from Portugal. Here is a plaque, or large cork card I saw on the wall somewhere. 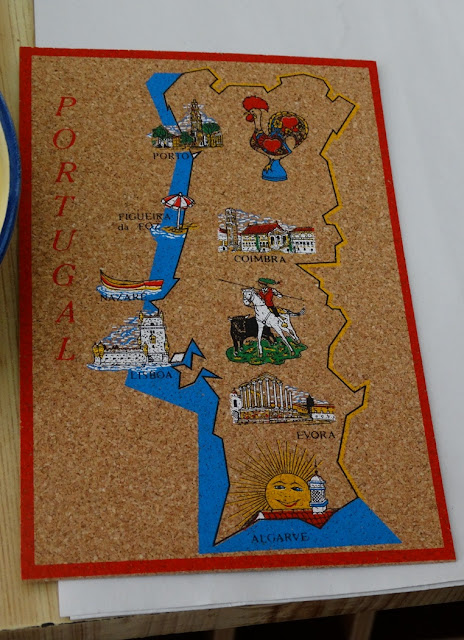 I always love to see the storks. We can usually spot the nests on high poles, but not often do we see them the storks around. There were quite a few circling on this occasion and I managed to get a good shot of one of them: 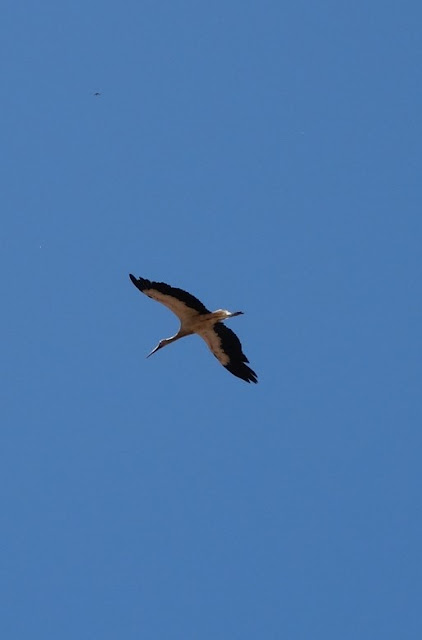 Of course the symbol of Portugal is the colourful cockerel. You see it everywhere. This is the fridge magnet I bought. 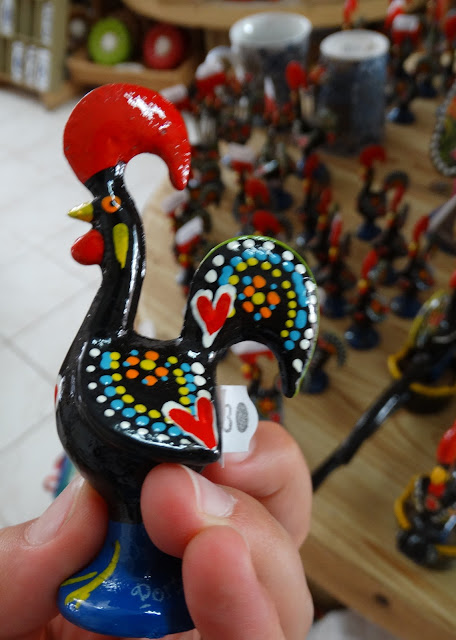 This is one of the tiles for sale. It has the cockerel on it and sardines which are the fish that this part of the world is famous for. 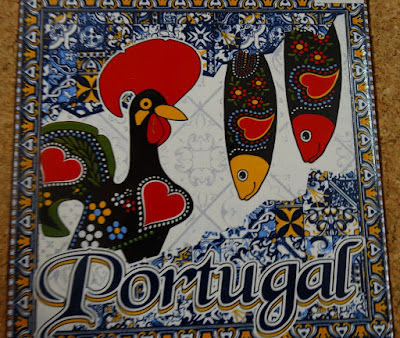 I thought this sign would make you smile. Apparently the portughese word for toilets is 'latrina'. Of course the English speakers among us will think of a hole in the ground. It had me chuckling. 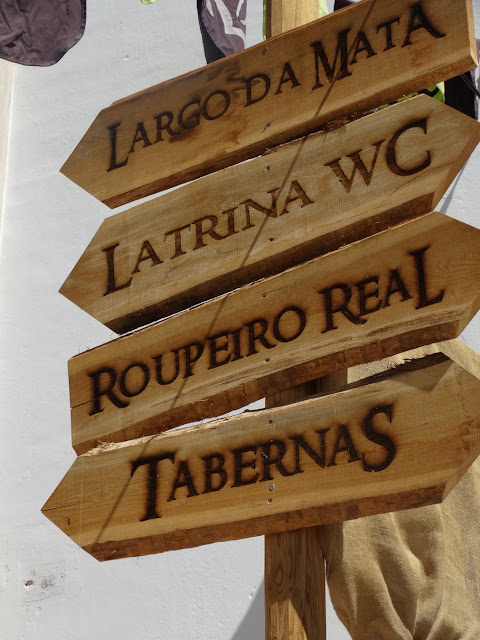 Outside the castle that we visited in Silves, there was this large statue. (Don't ask me who it is. I forgot to make a note of it). Our youngest grandchild is looking up in awe. 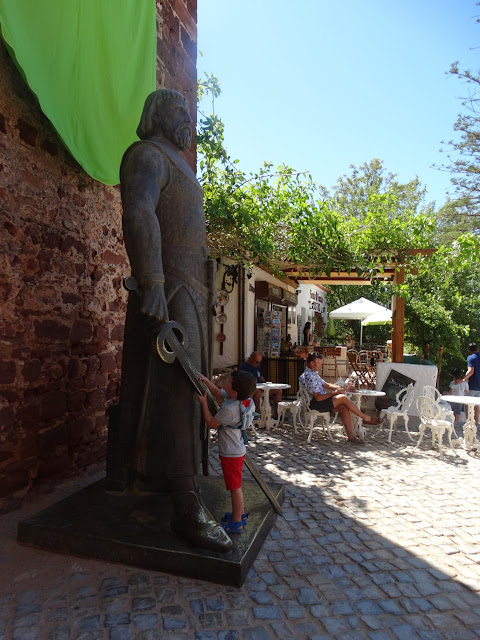 The oldest grandchild was not that i mpressed and was more interested to have a private moment at the back of the statue. 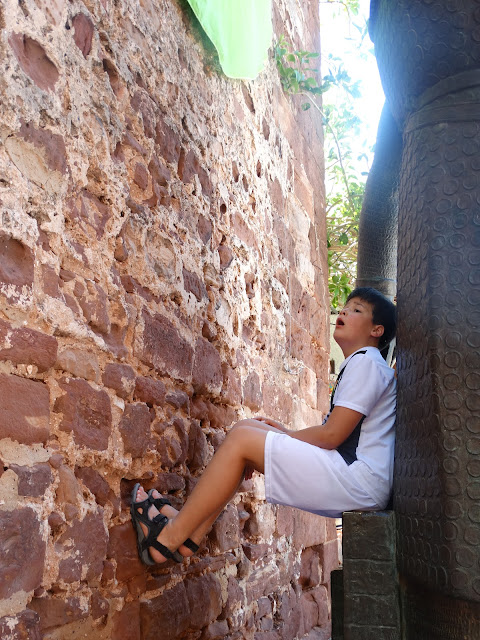 As usual, I will put some funnies at the end. They are all taken at weddings this time, and they all made me smile.
Have a good week, and
Keep smiling!
Hugs,
Lisca 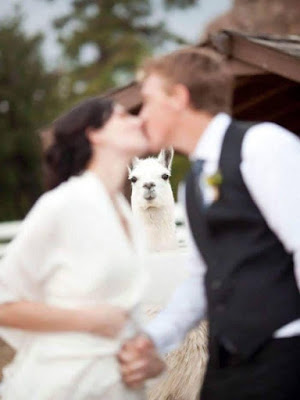 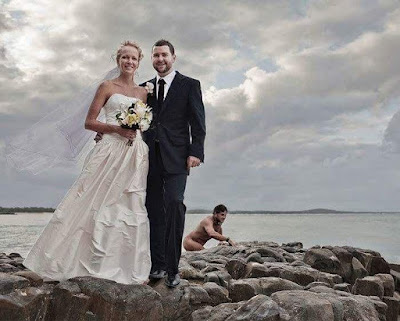 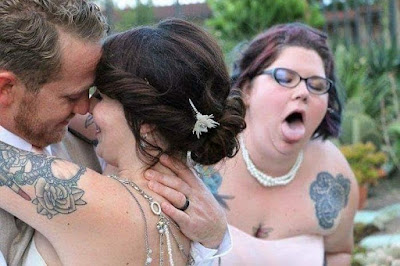 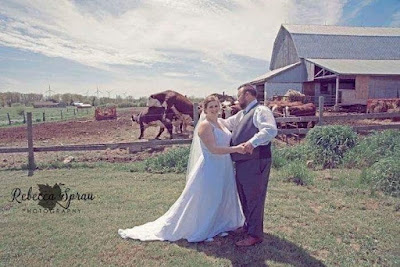 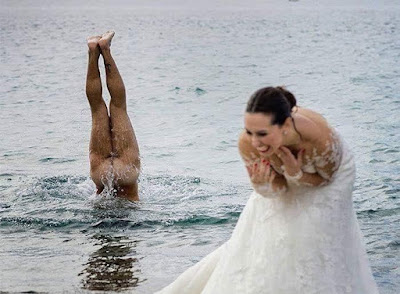