Here we are again at T for Tuesday, and I am looking forward to sharing a drink with Bleubeard and Elizabeth and all of you who are there.

In my Postcrossing profile, I mention that I like royals. I find monarchies a fascinating thing. It is amazing how monarchies have survived in these modern times. Some of course haven't and here in Spain they have been re-instated, which feels a bit contrived, but hey, we won't go there. My first postcard comes from the Netherlands, and shows the three princesses. From L to R: Princess Amalia, 7-12-07, princess Alexia, 26-6-05 and princess Ariane, 10-04-07. They were photographed here in 2017. 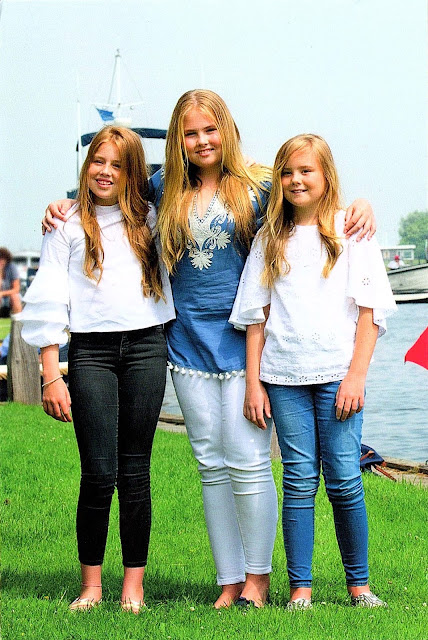 And I don't have to tell you that the next one comes from Russia. It is a photo of the Romanovs in 1913. In the middle is Tsar Nicholas II, The ladies are from L to R: his daughter Grand duchess Olga, another daughter Maria, then his wife the tsarina Alexandra, his youngest daughter Anatasia, their only son Alexei and on the right daughter Tatiana. 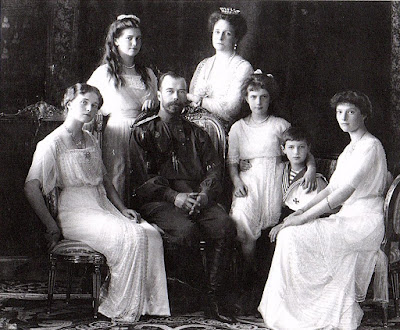 It is a well known fact that Alexei had hemophilia and was very delicate. Then tragically the whole family was assassinated by the Bolsheviks in 1918. 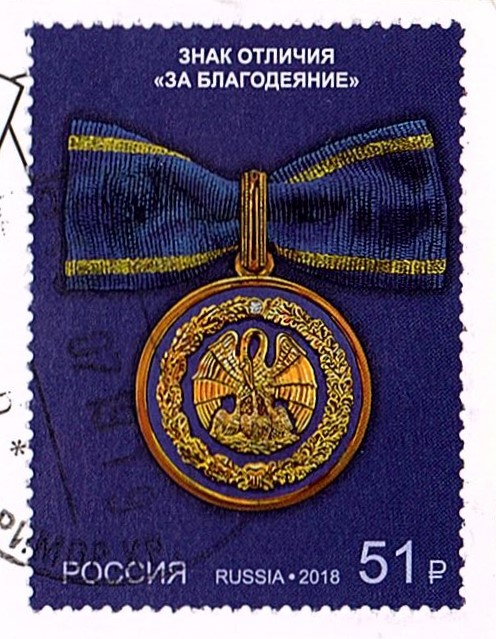 The stamp is from a series of State awards in 2018. I have not been able to find out more about them.

I might have mentioned that I bought a duvet cover at Lidl (German supermarket) and bought a single one by mistake, when I needed a double. I then was able to order another single online so that I at least had a pair. I will keep them for the guest bedroom which has two single beds, which can be put together to make a 'matrimonial'. But the single duvet covers had one pillow case and it was a Spanish size. I didn't have any Spanish pillows! Our English pillows are rectangular and the Spanish pillows are thin and long. You can see the difference in this picture. 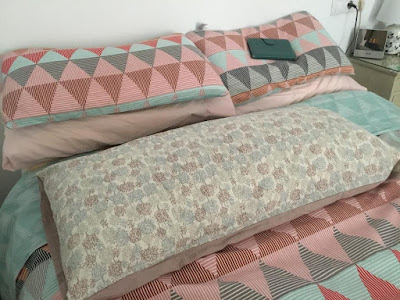 It all depends where the bedding comes from. When my parents downsized they gave me a lot of bed linen, so just to make things a little bit more complicated, I have many Dutch pillow cases and pillows, which are square! Anyway last Tuesday I went to the market here in the village to buy some Spanish pillows. 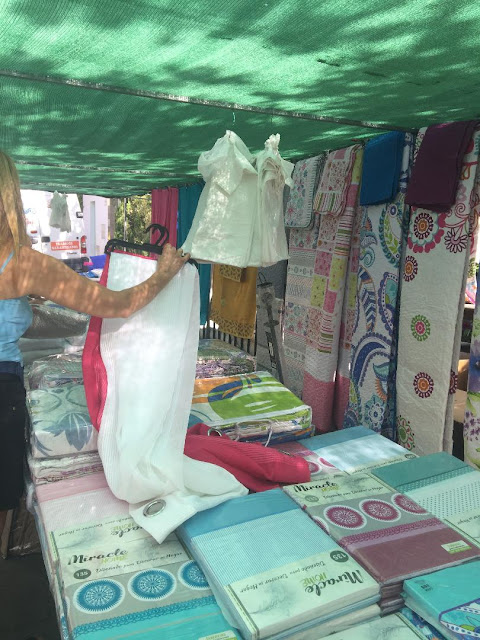 This is the stall that sells bed covers, sheets and duvet covers and lots of other nice things. I bought the pillows and because i wanted to have a look at some other stalls, I asked the  stall holder if he could keep them for me until i have finished shopping.

I went to visit the teas and herbs man. I love his stall. He has so many different teas and infusions and also any herb or spice you can think of and many more that i have never heard of. 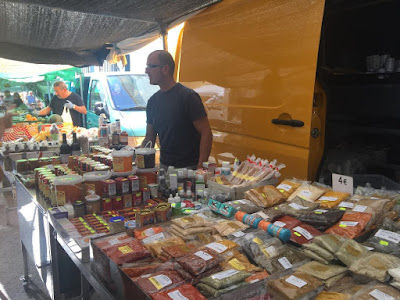 I bought some chilli pepper and some piripiri (also hot) and some Herbes de la Provence (mixed herbs). 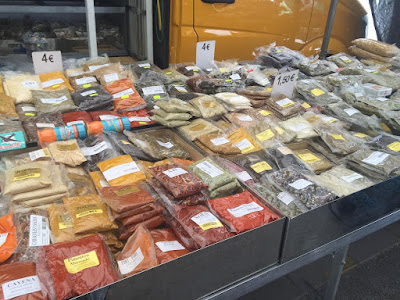 These are all teas and infusions: 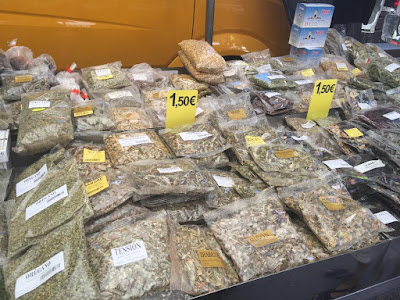 When i had finished my purchases I went to collect my pillows and the man posed for me with my pillows in his hands. 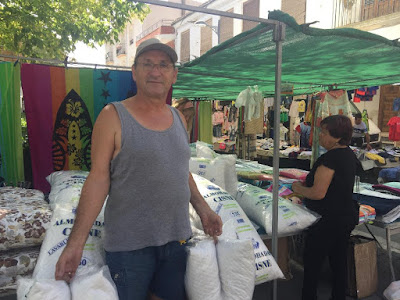 The whole bedding saga has a happy ending because i was able to find the duvet cover that i wanted in the 'double' size later in the week.

The last photo is a sculpture i wanted to share with you. I'm trying to find out where it is and who made it. 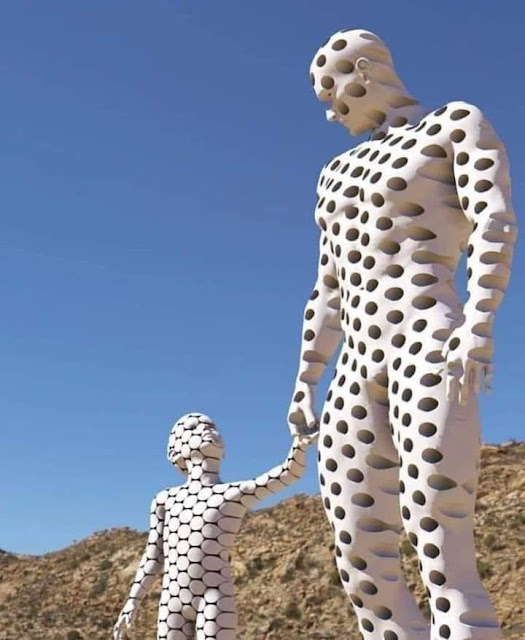 The smaller sculpture (the child) is made of cores taken out of the big sculpture. I find it very beautiful and thought provoking. If anyone has seen this around on social media or elsewhere I'd like to know more. I got it on Facebook from an Italian friend, who  has not been able to find out more either.

That's it from me today. I will try to do as many comments as I can today but then tomorrow morning we will be leaving early and travelling down to Portugal. We will be on the road all day.
I will try to remember to take pictures and you will be able to see them next week.

Edits!
The eldest princess of the Netherlands was born in 2003 (not in 2007. That was a mistake that Elizabeth kindly pointed out)
This is what they look like now in 2019: 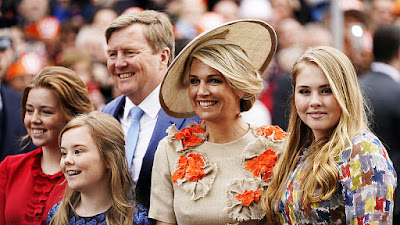 About the sculpture: A Postcrossing friend called Jacki wrote:
https://www.instagram.com/chadknight/?hl=it
It is not a real sculpture. Its digital art by Chad Knight.
He also works for Nike.
If the above link does not work, then google Chad Knight instagram.
Crazy stuff!