Hi everybody! It's Tuesday, so off we go to join Elisabeth and Bluebeard at the T-Party. You can join in with a blogpost that has a beverage or a reference to a drink in it.

I usually start with showing you some postcards. (My hobby is Postcrossing, which is a worldwide postcard swap). This week I received two postcards from Finland, a country that has a lot of Postcrossers. 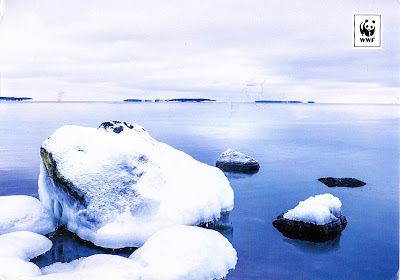 This beautiful, cold looking card was sent to me by Pamela, who tells me it was -5 degrees C with 30 cm of snow. She is looking forward to spring as she is 'getting tired of the white stuff'.
The stamp is beautiful too. It features the northern lights or aurora borealis. A natural fenomena that I have yet to witness in person (But I'd love to) 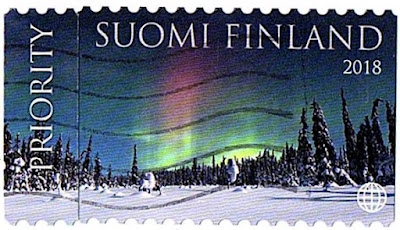 The second card comes from Finland too. It features a yummy looking waffle with cream and jam! It really makes me hungry for the wrong things! I love waffles, but they are not good for my figure and that is the reason I have never bought a waffle maker. I might have to relent though, after seeing this.... 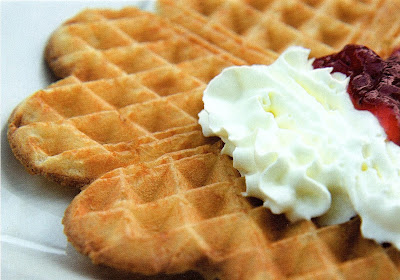 The stamp has a very handsome dog on it. I assume it is a sleigh dog. It's not a Husky, and it's not a fox either as it is wearing a collar. It seems to have a very thick coat to keep it warm in the snow. 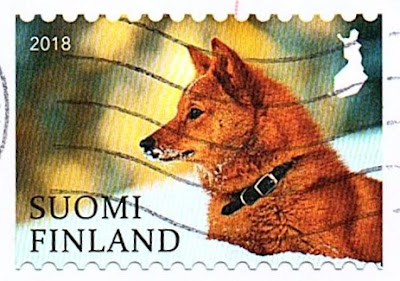 Last Sunday we went on a little trip to nearby Almería. It is on the coast and about an hour and a half drive from home. But we had never been there, so we decided to have a look what it has to offer.

We found a nice hotel in the centre of town (so we could leave the car and walk). Car parking space in Spanish cities is at a premium and not every hotel has parking facilities, but this one had. It was built underneath the hotel and was accessed by a car elevator. This was new to me. We'd never  used one of those before, so that was fun. I have put photos of the hotel on my previous blog (Friday).
We'd been to a party on Sunday afternoon, so we weren't hungry in the evening. All we wanted was drinks and tapas (snacks). In the Granada province (where we live) we get a free tapa with every (alcoholic) drink. Here in Almería they go a step further in that they let you choose your tapa. Wow, that is good. 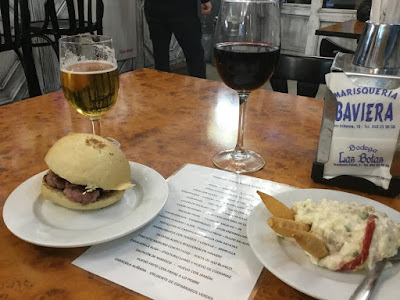 The next morning we went sightseeing. We visited the Guitar Museum. 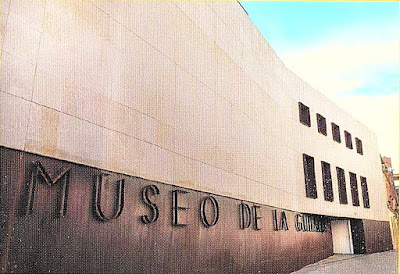 It was all about Almerían guitar builder Antonio de Torres. (some blurb from the leaflet further down in yellow). 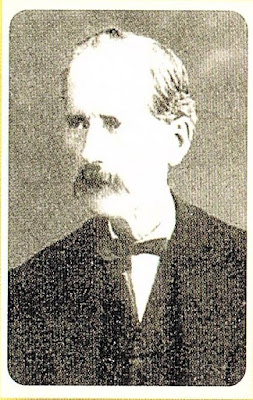 The bottom floor featured a giant model of his famous guitar. I took this photo from the upper gallery. One can walk underneath the guitar model, where there is a lot of information about De Torres's guitar building. 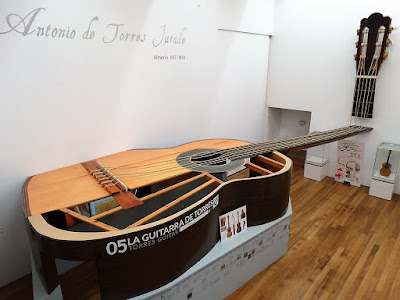 The maker's label that is inside the guitar, was stuck on the floor. We saw it as we walked underneath the huge structure. When you walk in, you don't realise you are walking inside a giant guitar. It doesn't become obvious until you go upstairs, from where i photographed the label. 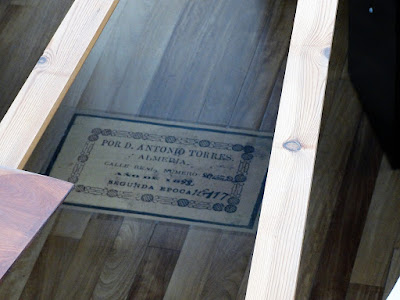 The ground floor houses a replica of Torres's workshop, and described the tools and the method. It also showed all the different kinds of woods. Very interesting. There was a video explaining and showing how a guitar is built. In Baza (we live just outside Baza) there are still a couple of guitar builders and we have been in their workshops a few times when hubby, who is a guitarist, needed something. I am always fascinated by their art. 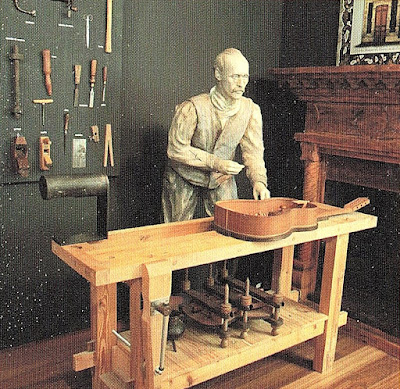 There was also a photo exhibition about what Almería looked like in Torres's days (19th century). 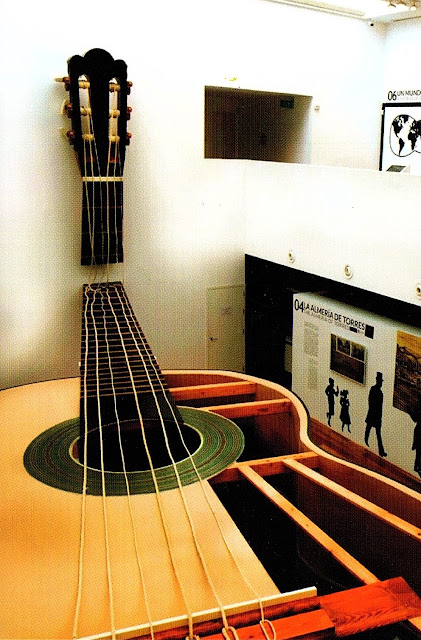 Going up the stairs to the first floor, there were famous guitar-themed works of art. Then we looked at the players gallery. A compilation  of great guitar players in history (including people like Hendrix and Clapton). 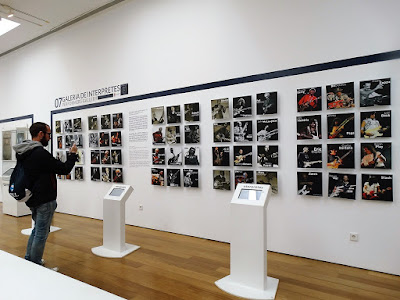 There was a space where acoustics were explained and one could 'have a go' at playing. So hubby had a little strum on one of the modern guitars lying about. 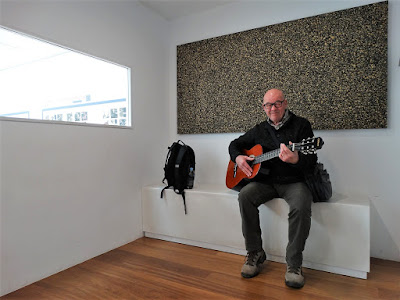 Then there was an exhibition on the history and development of the guitar from antique guitars to lutes and vihuelas. (see this short article from the Encyclopedia Brittanica).
At the end there were headphones where every antique instrument could be heard.
Here is a copy of the leaflet about Antonio Torres: 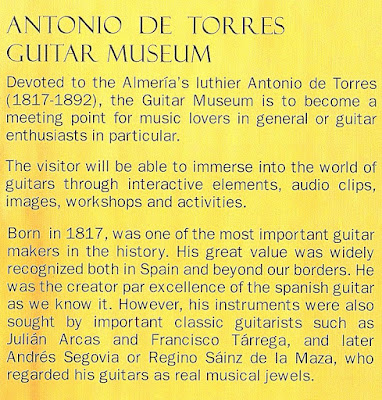 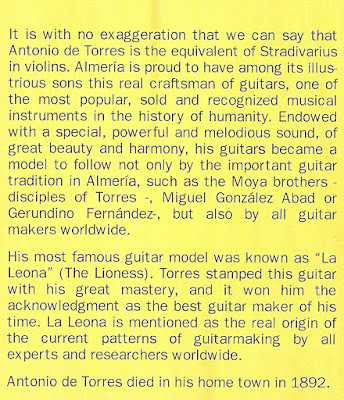 I hope you enjoyed the visit to the guitar museum. We certainly did. I don't play the guitar but I have lived with a musician husband for many years and have been 'roady' to his gigs whenever I had a weekend off (he led a ten piece folk band). And now living in Andalucia where guitar playing (flamenco and classical) is in their blood, it was a very interesting experience.