A Postcard A Day - Tuesday 4 Dec 2018 - T for hopscotch, mince pies and sunshine 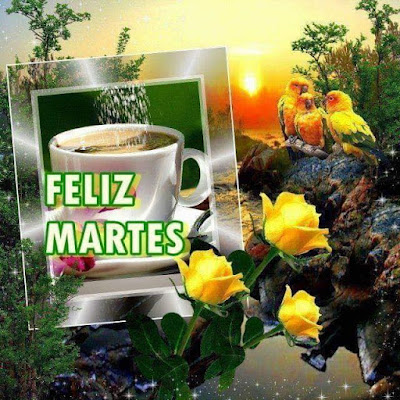 Good Morning! The image says 'Happy Tuesday!' It's not a postcard but it is one of those images that get sent to me on my phone by well meaning friends to say good morning or good evening. It has a beverage on it so I thought it would be appropriate for the T-party. Elizabeth and Bluebeard host this T-party and anyone is welcome with a post with a beverage (or two) in it.

My first postcard comes from Canada: 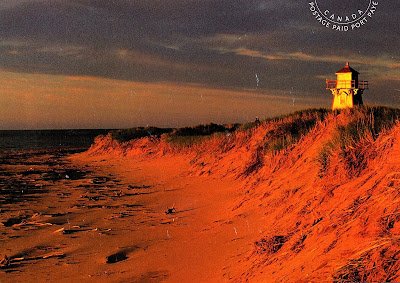 It is a beautiful photo of Prince Edward Island National Park in the evening sun. I didn't know where that was, and had to look it up.

Prince Edward Island National Park is a National Park of Canada located in the province of Prince Edward Island. Situated along the island's north shore, fronting the Gulf of St. Lawrence, the park measures approximately 60 km (37 mi) in length and ranges from several hundred metres to several kilometres in width. Established in 1937, the park's mandate includes the protection of many broad sand beaches, sand dunes and both freshwater wetlands and saltmarshes. The park's protected beaches provide nesting habitat for the endangered piping plover; the park has been designated a Canadian Important Bird Area.
The Prince Edward Island National Park also includes Green Gables, which was the childhood inspiration for the Anne of Green Gables novels by author Lucy Maud Montgomery, as well as Dalvay-by-the-Sea, a Victorian era mansion currently operated as an inn.
In recent years, environmental and conservation groups have identified Prince Edward Island National Park as being the most endangered in the national park system, based on human impact. The park also experiences severe coastal erosion as a result of winter storms and its vulnerable shoreline.

My second postcard is a bit of nostalgia coming to me from Germany: 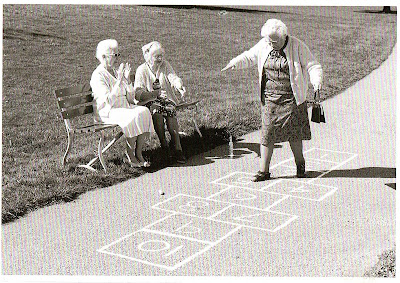 The mature ladies playing hopscotch! I love it!
Did you play hopscotch as a child? What was it called?(in Holland we called it 'hinkelen'). Did you sing a rhyme with it? Can you remember that rhyme? Do children in your neighbourhood still play it?
Of course I had to look up a bit more information:

Hopscotch is a game we all know as it is played all over the world. Here in Spain, and in most south american countries it is known as Rayuela (In Cuba it is called Pon) .
Wikipedia: In Germany, Austria, and Switzerland the game is called Himmel und Hölle (Heaven and Hell) although there are also some other names used, depending on the region. The square below 1 or the 1 itself are called Erde (Earth) while the second to last square is the Hölle (Hell) and the last one is Himmel (Heaven). The first player throws a small stone into the first square and then jumps to the square and must kick the stone to the next square and so on, however, neither the stone nor the player may stop in Hell so they try to skip that square.
The popular rhyme is the following:

One for sorrow,
Two for joy,
Three for a girl,
Four for a boy,
Five for silver,
Six for gold,
Seven for a secret,
Never to be told.
Eight for a wish,
Nine for a kiss,
Ten for a bird,
You must not miss

A much older version of that rhyme is this:

One for sorrow,
Two for mirth
Three for a funeral,
Four for birth
Five for heaven
Six for hell
Seven for the devil, his own self 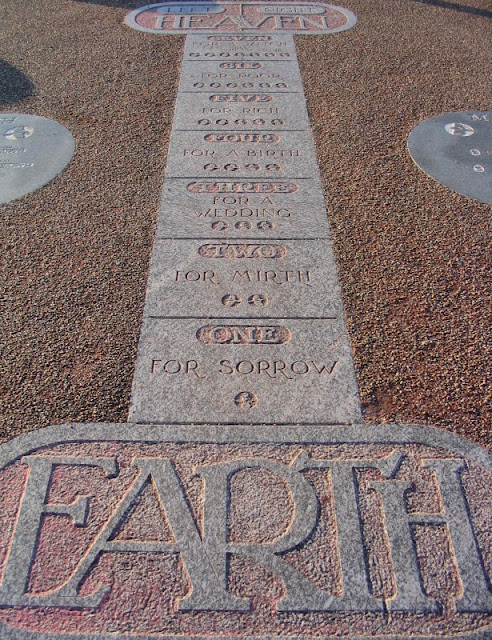 There are many variations The photo above is from Morecamb pier in England. (Jo will have seen it), the stones there use the older rhyme but don't mention 'hell', only 'heaven' and 'Earth'.

Here are the stamps on that German card 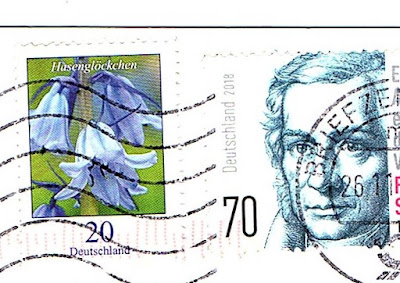 The face on the stamp belongs to the theologian Schleiermacher. I have noticed that I inadvertedly cropped off half the stamp... sorry.
Friedrich Daniel Ernst Schleiermacher November 21, 1768 – February 12, 1834) was a German theologian, philosopher, and biblical scholar known for his attempt to reconcile the criticisms of the Enlightenment with traditional Protestant Christianity. He also became influential in the evolution of higher criticism, and his work forms part of the foundation of the modern field of hermeneutics. Because of his profound effect on subsequent Christian thought, he is often called the "Father of Modern Liberal Theology" and is considered an early leader in liberal Christianity. The neo-orthodoxy movement of the twentieth century, typically (though not without challenge) seen to be spearheaded by Karl Barth, was in many ways an attempt to challenge his influence.

Yesterday was a gloriously sunny day. I immediately put my washing machine to work. I washed my fluffy long dressing gown, knowing that in this weather it would dry in a couple of hours. We don't have tumble dryers here. (I suppose they are for sale, but why should we buy one in a country with so much sun).
Anyway, I was leading up to the fact that we had lunch outside. Our drinks (water) are on the table too and the meal is courgettes provencale gratin (courgettes are zucchini). 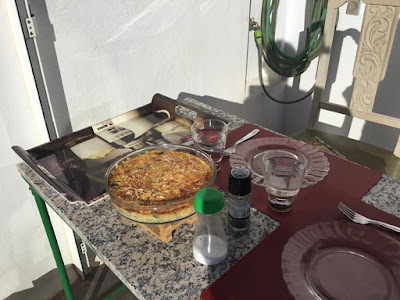 On Saturday I went to our Spanish/English conversation group. We had decided to talk about Christmas traditions relating to food. We would all bring something typical. I made an attempt at mince pies (in the fore ground) . The mince meat turned out well. I had made it without suet as I can't get that here and I don't particularly like it. On the left is a plastic container of mini almond muffins. Made by the girl in red. They were delish. As you can imagine, we had lots of fun. One of the guys had raided his liquor cabinet at home and had brought all sorts of drinks for us to try. 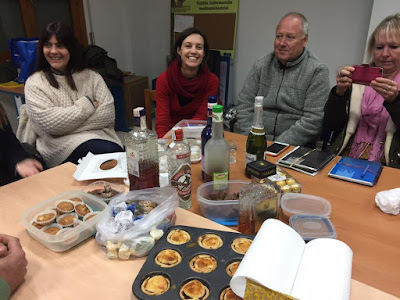 Now for my last photo: One of the tea jars that I have. I bought this mix at the medieval market a couple of months ago. It is called Rooibos Kalahari. I can't remember what is in it, but it tastes spicy with some citrus in the background. We like it a lot and drink it weak without milk. 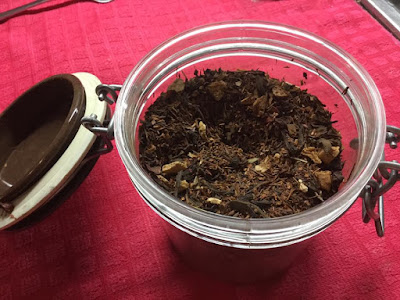 That is it from me today. I thought I wouldn't have a beverage reference, and I ended up with several. Oh well..

Have a very happy T-Day,