Good Morning lovely peeps, How are you all today? It's Tuesday again and we are in time for the T-party organized by Elizabeth and Bluebeard at Altered Book Lover. Please join us with a beverage of your choice. Mine is a coffee and it will feature further on in this post but first i would like to show you some more photos from a couple of weeks ago when Dear Daughter came to stay. We visited Castril and did the 'gorge' walk. On our walk we saw this little chappie: 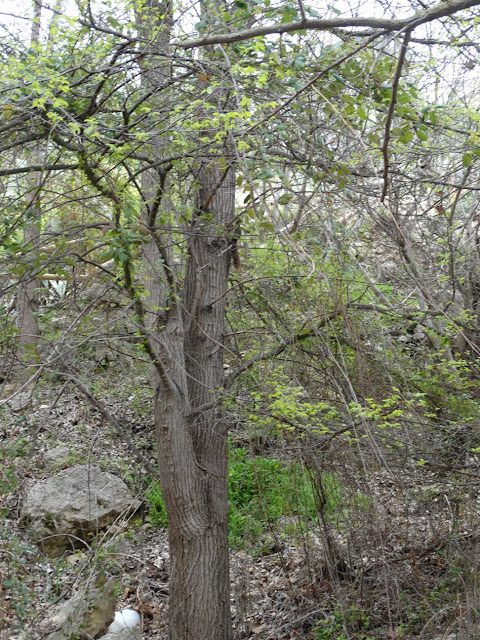 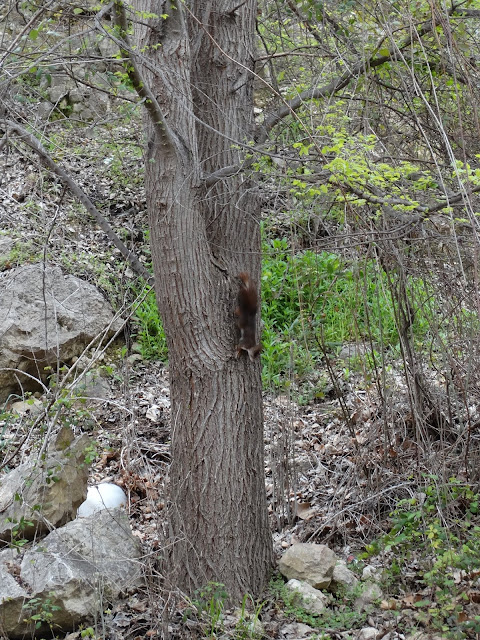 Yep, it's a red squirrel. In fact there were two. They were playing and chasing each other up and down several trees. 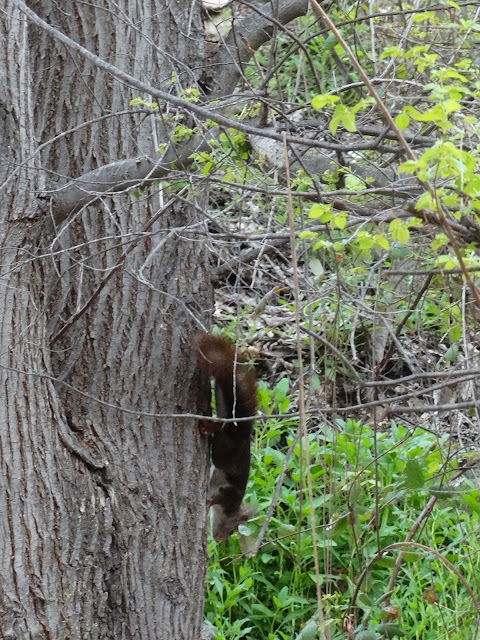 They were so fast, it was difficult to capture them on photo. Finally one of them rested for a few seconds. Here he is lying on a branch, like a mini lion. 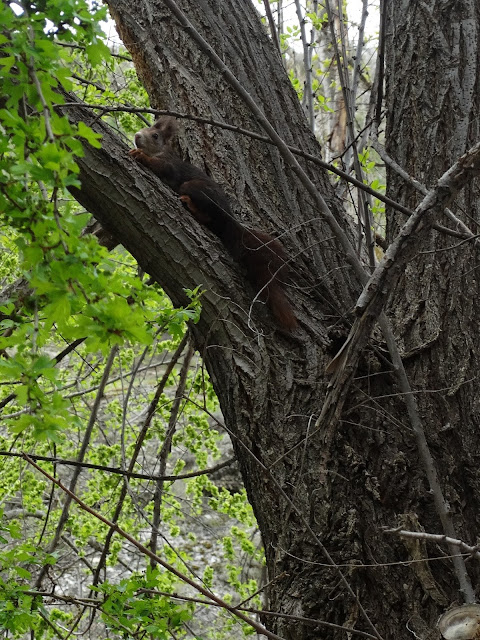 We enjoyed seeing these squirrels as they were (indigenous) red squirrels which in the UK are almost extict. (Pushed out by the grey squirrel).

After the walk we climbed up out of the valley and entered the village at the bottom of this street (behind hubby and daughter): 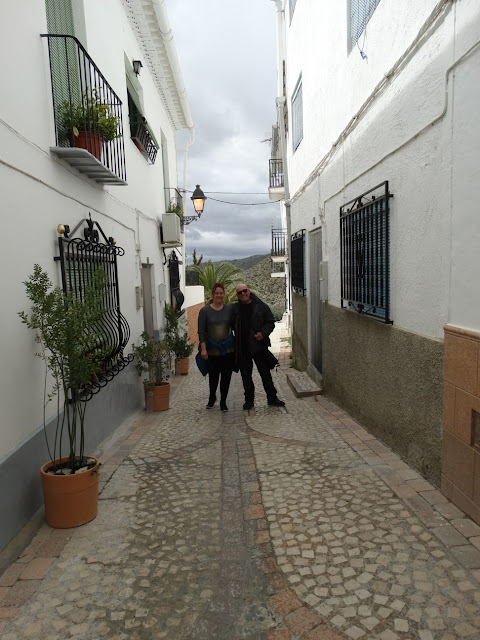 We were all gasping for a drink so we stopped at a bar in the village. 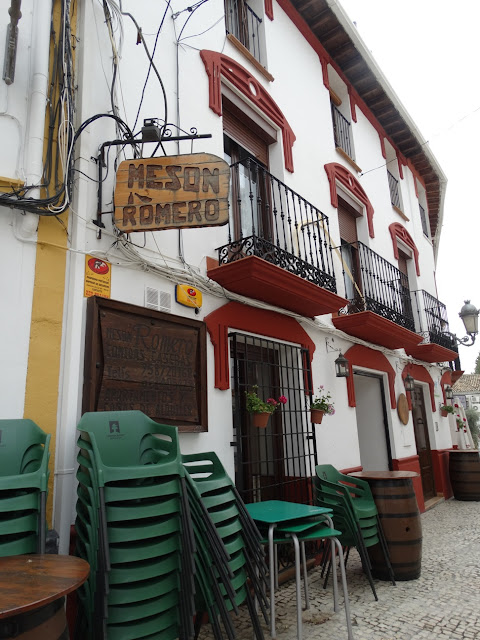 The chairs were not out as the weather is still cold. We came in and saw these men sitting at the table. We asked permission to take pictures so you can see what it looks like. 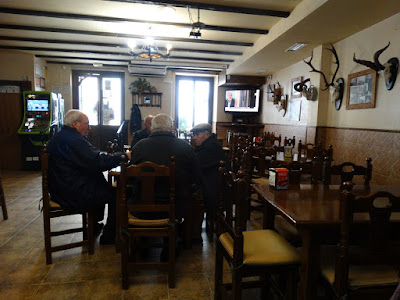 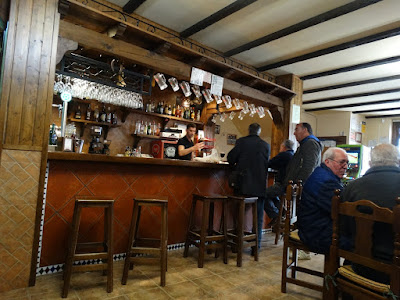 And here are hubby and daughter drinking their 'café con leche' (coffee with milk) and mine is a 'café cortado' (an espresso with a dash of milk). 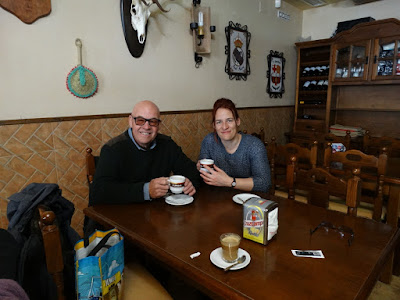 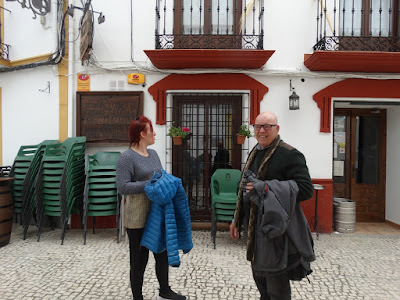 Now for my postcard. 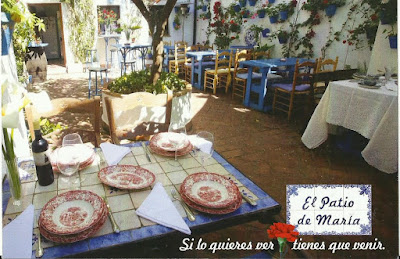 It is one I picked up in Córdoba, where I was on Sunday. It is an ad-card. It advertises this cute little place. It is called El Patio De Maria. Most traditional houses in Andalucia (Southern Spain) have small inner courtyards (patios) that are sheltered private places where people grow flowers in pots on the wall and have climbing plants crawling up.  I had an hour to kill and was just walking along when I saw this sign: 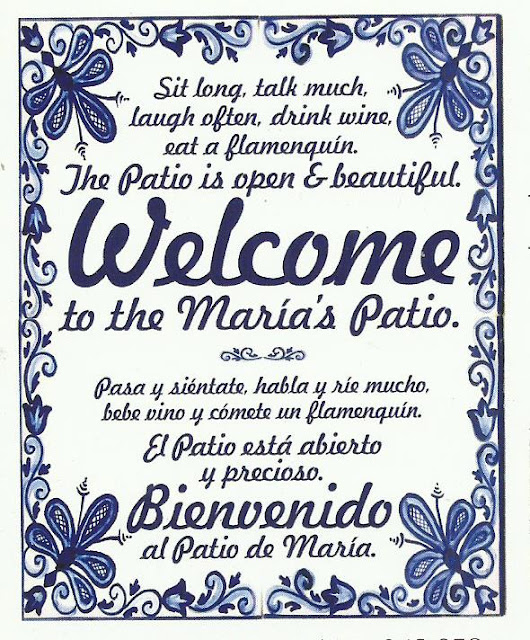 It looked very inviting indeed, so I popped in and had a drink. No, I did not have a flamenquín. I didn't even know what that was until now. This is a 'flamenquín': 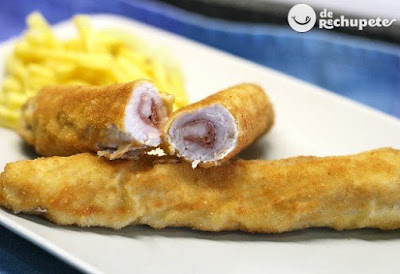 It's made with cooked ham and Serano ham and eggs. I have more photos of this delightful patio but I will save that for another time.

Happy T-Day everyone!
Hugs,
Lisca
Posted by Lisca at 00:14