Hello lovely people, it is Tuesday again. The day I share something with a drink in it. We are all invited by Elizabeth and Bluebeard to join the T-party and link up at her blog Altered Book Lover. 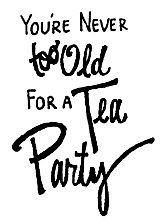 Lets start with my postcard. It comes from Ethiopia, a place called Lalibela. Lalibela is a town in the Amhara region of northern Ethiopia. It's known for its distinctive rock-cut churches dating from the 12th and 13th centuries, which are pilgrimage sites for Coptic Christians. Carved out of rock, the subterranean monoliths include huge Bete Medhane Alem, and cross-shaped Bete Giyorgis. Many are joined by tunnels and trenches, and some have carved bas-reliefs and colored frescoes inside. 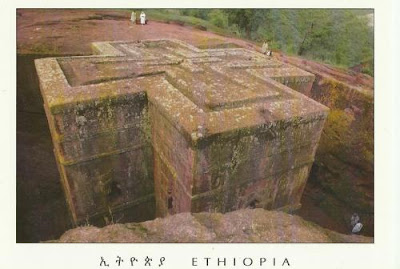 They are a UNESCO World Heritage site. On the card you can see the Bete Giyorgis (St Georges church) church from the top. Here are some images (from the internet) of the same church from different angels: 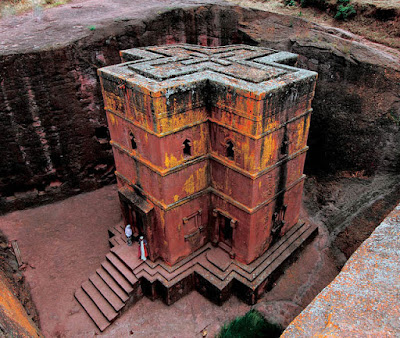 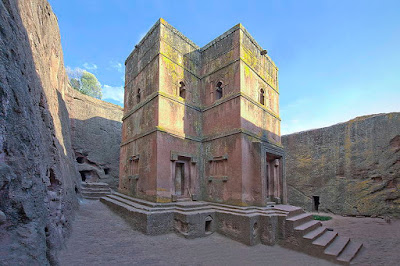 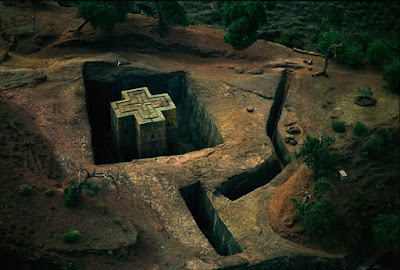 I find this utterly fascinating!

One of our neighbors are a couple from Denmark. They keep the house as a holiday home and stay there at least three times a year. They were here last week. We get on well with them and we always make a point of going out for a meal somewhere. Last week we went to this restaurant in the neighboring village of Hijate. 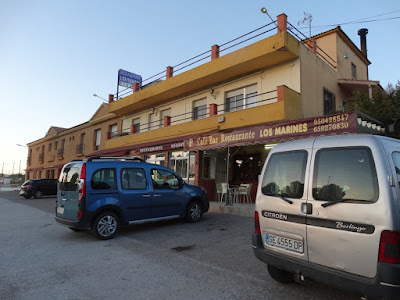 We had been there many years ago and had good memories.We sat at a table near the fireplace (it’s still a bit cold here). The waiter recommended the steak. We decided to share a large one between four of us and have some side dishes as well. I know in America eating steak is not unusual, but for us this was a real treat. Look at it. It is a sight to behold! 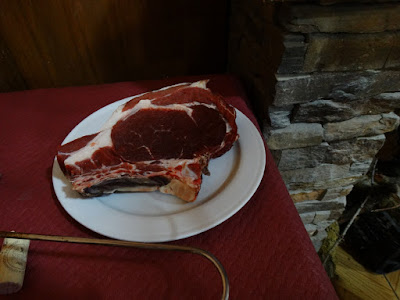 The steak was cooked on the fire, after being asked how we wanted it. 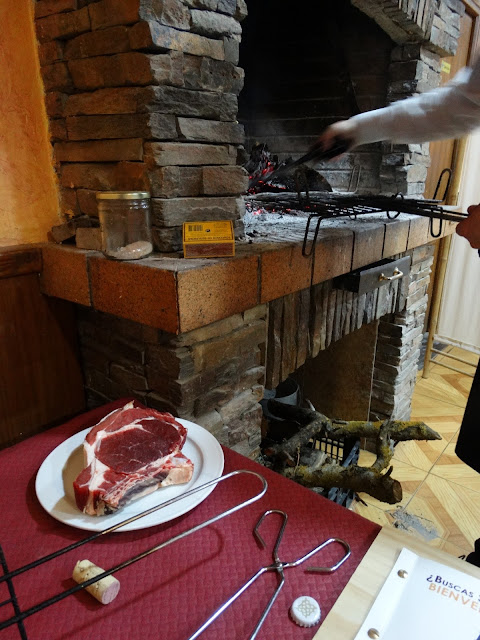 Here are our Danish friends (with an empty glass!) 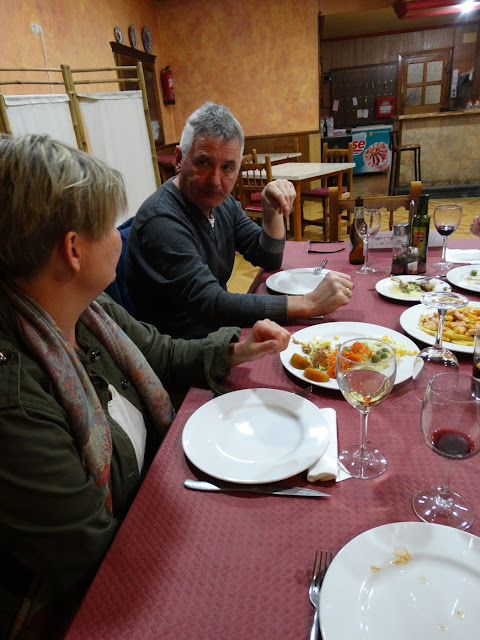 Ah, here is a glass with something in it! My hubby is on the left and one of our friends on the right drinking Coca Cola as he was driving. 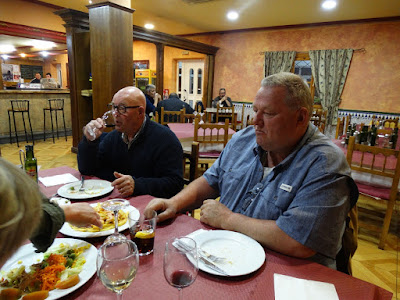 Here is our steak being cooked. 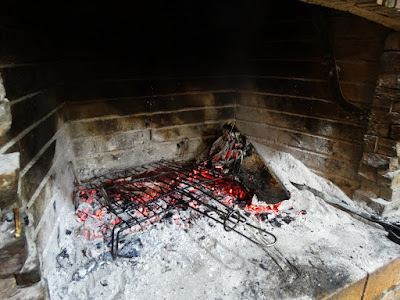 And it was served sliced 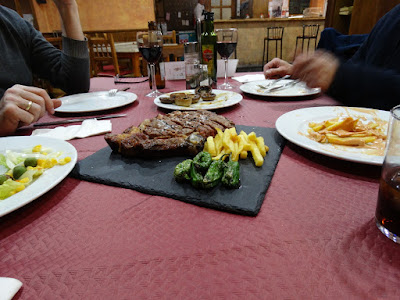 In the back ground is a dish of roasted mushrooms, and the green veg on the slate with the chips are roasted green peppers. 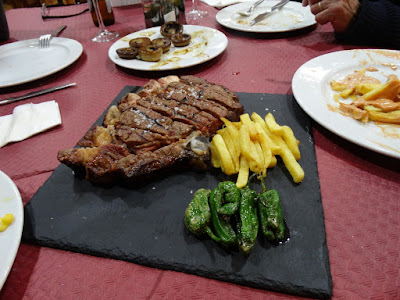 My husband had a pizza. 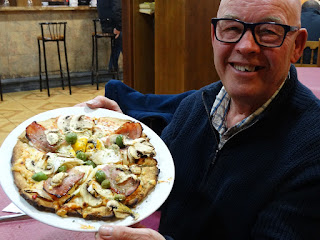 Now for something different:
Hubby is doing the finishing touches to the build of the house. We have a strange triangular plot. I've taken the photo from the third floor so you can see the tiny patio that goes with the ground floor flat. Hubby found some tiles the same as the first floor terrace and has finished tiling it. Looking down it looks really nice. you can only see half of it as the other half is under the eves. It will be a shady place to sit in and i have already bought some jasmin plants to go on that white outside wall. 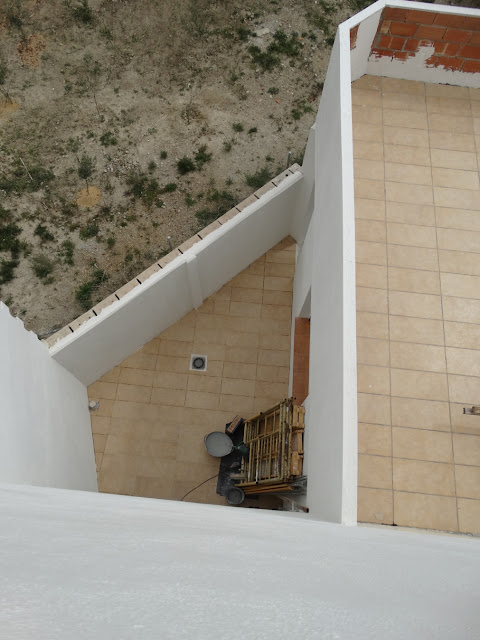 The photo below is nearly the same but here you can just see the wall our the owners of the neighboring piece of land have built on the corner. At first they had built a straight wall. No problem. But then some months later, while we were on holiday, they built the round bit (why?). It became very difficult to get our car round the corner. And car plus trailer is nigh impossible. We have talked to them but they don't want to take it down. We have gone to the council as it encroaches on the road, and they have served an order to take it down, but the family in question have ignored this so far.  It has been going on for several years now.  If we had the money we would take them to court! But it would cost too much, and it's not worth the hassle. In the meantime we have bought a smaller car. But still... 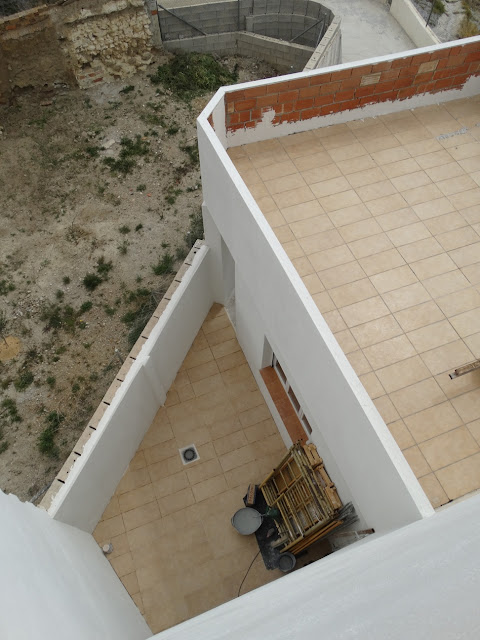 So, that is it from me today. I wish you all a great T-Day, and a very lovely rest of the week.