Hello lovely ladies (and the occasional gent),
It's Friday again and time to share what made us smile this week. However hard your week, there is always a silver lining.

My week has not been hard at all. And I have received many cards (always makes me smile that).
The first one I want to show you is by the Finnish illustrator Inge Löök. I love her 'Naughty Aunties'.
Here they are paddling in the pond, apparently retrieving their bottle(?). It was sent to me by someone  in Germany who knew I would like this. 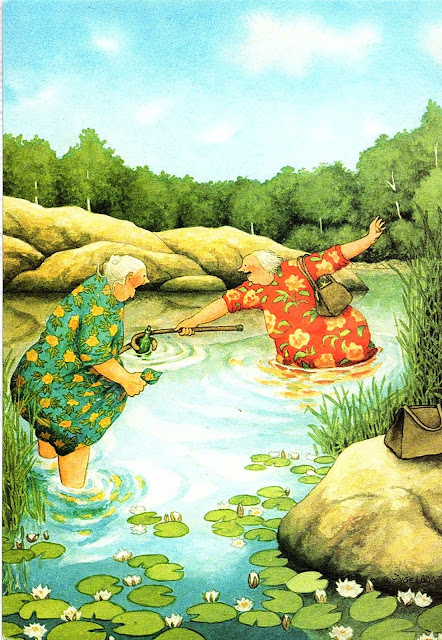 The stamp is one of the latest German stamps about freedom of press. I shared last Tuesday that it has been designed by Christoph Niemann. He says:
"I wanted to visualize both the struggle of journalists to uncover hidden but relevant facts and the increasing number of journalists around the world who are thrown in jail for doing their work ." 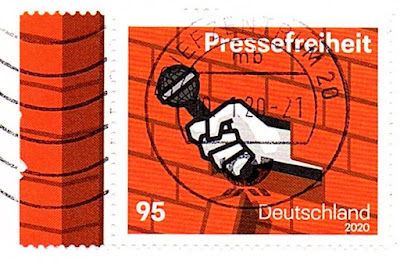 The second card comes from Finland and is another Inge Löök creation. The Aunties are having fun with some candy canes. 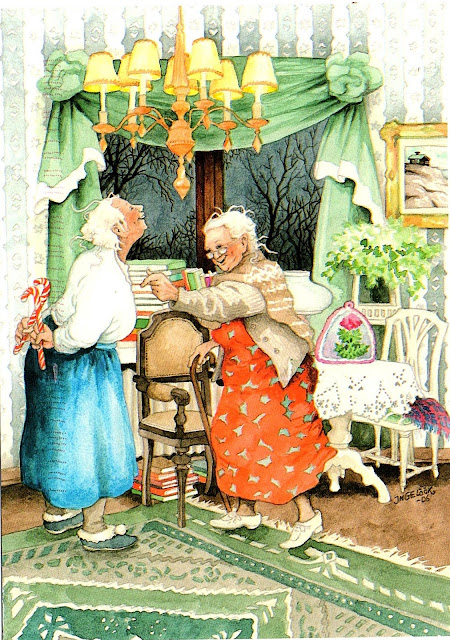 Candy canes are something typically American associated with Christmas. I have never seen them here. But they have arrived in Finland it seems.

The stamp on this card is lovely. It has a butterfly on it. I've not been able to find out which butterfly it is. 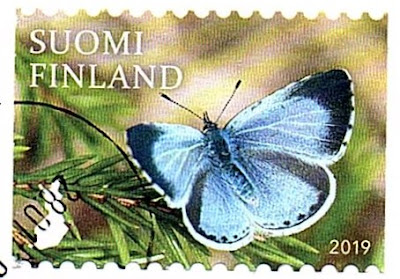 Now let me tell you how my week has been. On Saturday we got together as agroup to learn/practice our Spanish. There was one Spanish guy, so our meeting could go ahead. It's always fun and I always learn something. 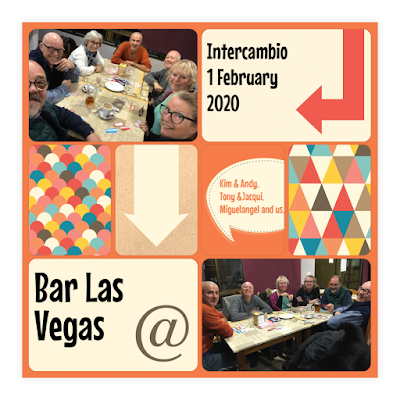 On Sunday after church we were invited by some friends to have a cup of tea. But the weather was so nice, I suggested we go for a walk. We had a lovely walk on a path that we hadn't been on yet. The almond trees have started to flower and that really makes me smile because it means spring is on its way! 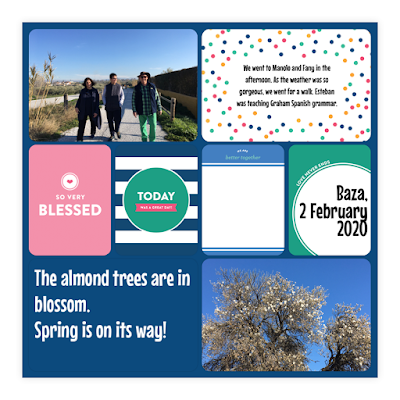 On Monday I had to go to the dentist again. Hubby came with me as we would go shopping too. I wasn't long and we had a coffee in the bar right next to the dentist. Perfect! 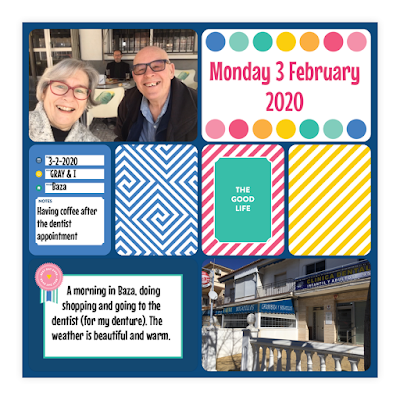 On Tuesday two friends came over for coffee. I had made up some small bunches of oregano which another friend had picked and given me. Then we (Hubby and I) went out for lunch. The first time since December (we have been on a detox fast until the end of January). In the picture you can see the cold soup called 'salmorejo' which I like. There were quite a lot of police there today. Nothing going on. They were just having a drink. 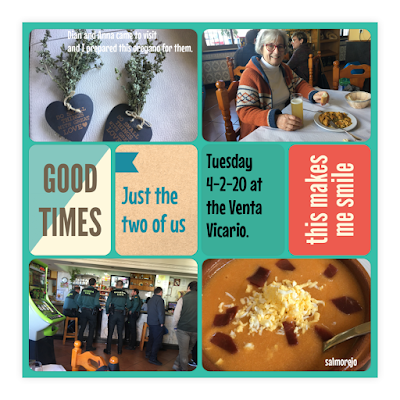 Then on Wednesday I had to go into town again to pick up my old iPhone that I had repaired. I now have a spare phone. You never know...
I visited a photograph exhibition about Iran (very interesting) and I watched palm trees being trimmed along the high street. It caused traffic chaos but it was interesting to watch (I was on foot) 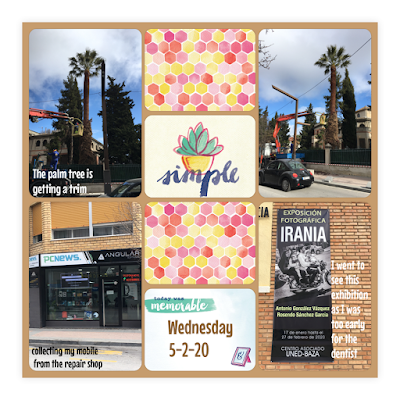 That is it from me this week. Let's go and visit Annie at A Stitch In Time for some more smiles. I'm also visiting Virginia at Rocking Your World Friday.
Of course there are some funnies at the end (Sorry, I could only find a few) 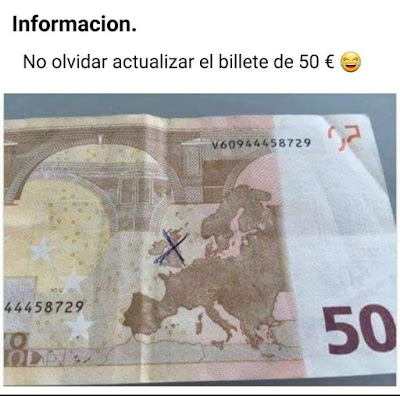 The writing says: Don't forget to update you 50 Euro bill. 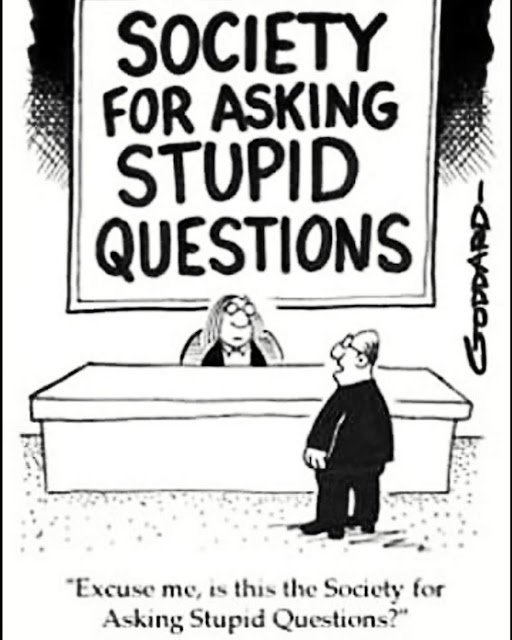 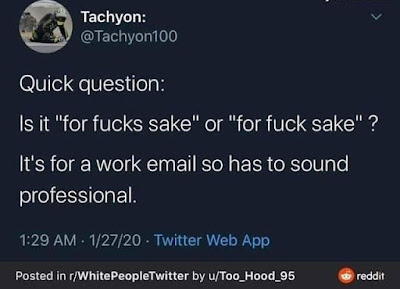 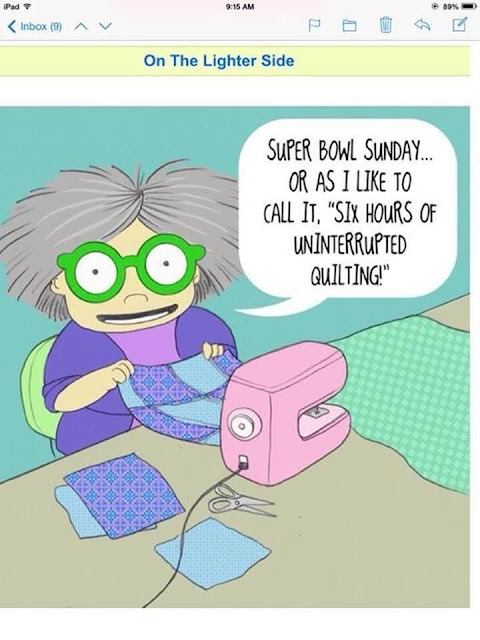