Hello lovely girls! It's Tuesday again and time for the T-Party hosted by Elizabeth and Bleubeard. My entry (my beverage) will be visible further down in this blog post but first off are my postcards.

My first postcard comes from China and was sent by Li Ming. She tells me that she has met with two primary school class mates to drink tea. And they chatted about things 'many years ago'. 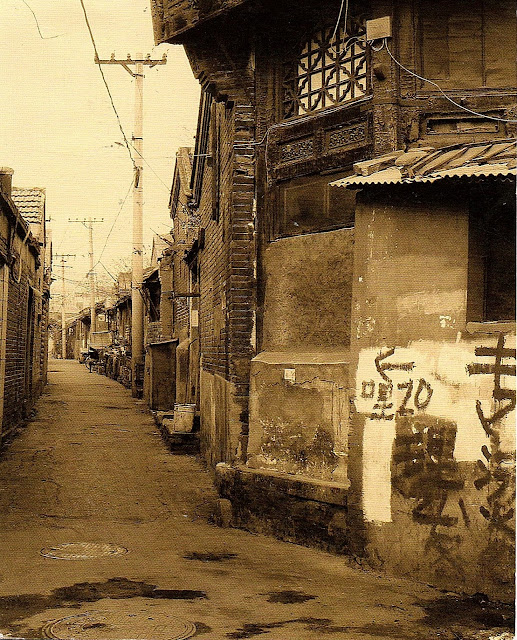 The postcard depicts Xiaochunshu Lane (It doesn't mention which city though and what date approx).
The stamps are beautiful as many chinese stamps are. The one on the right clearly advertises  the Olympic Winter Games 2022 , but the one on the left is a bit of an enigma. I have no idea what these ladies are doing. Some sort of craft. Are they painting silk? Anyone got an idea?

The third stamp shows an 18th century gentleman and I didn't know who he was until I googled the dates and came up with Joseph Haydn. 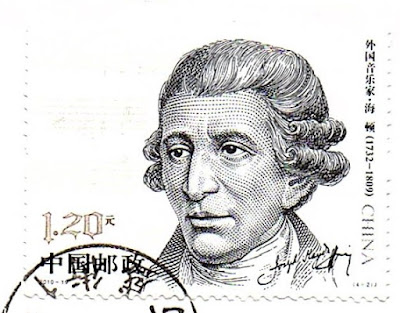 He was an Austrian composer of the Classical period. He was instrumental in the development of chamber music such as the piano trio.[2] His contributions to musical form have earned him the epithets "Father of the Symphony" and "Father of the String Quartet".[3]
Haydn spent much of his career as a court musician for the wealthy Esterházy family at their remote estate. Until the later part of his life, this isolated him from other composers and trends in music so that he was, as he put it, "forced to become original".[c] Yet his music circulated widely, and for much of his career he was the most celebrated composer in Europe.
He was a friend and mentor of Mozart, a tutor of Beethoven, and the older brother of composer Michael Haydn.

My second card comes from Portugal. It shows the city of Porto and the river Douro. 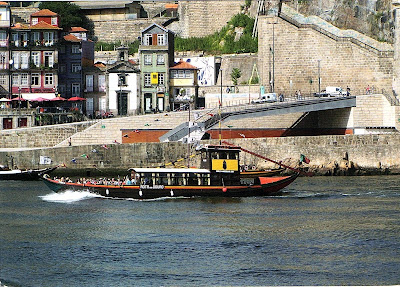 And they used a Harry Potter stamp! How cool is that! 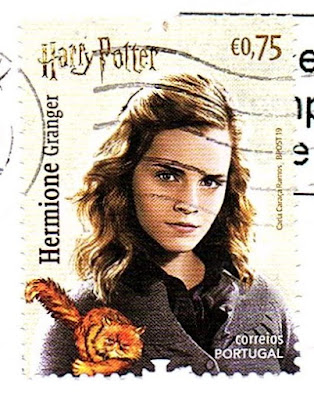 Elizabeth often takes us to a restaurant she has visited. Let me take you to this lovely restaurant that we found when we were traveling back from Madrid. It is a place called Puerto Lápice, near Ciudad Real, in central Spain, south of Madrid. 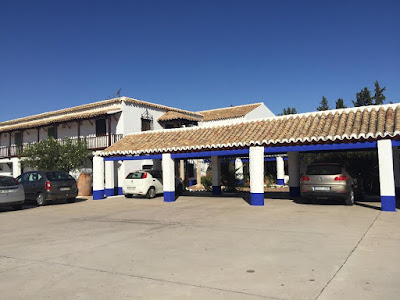 After we parked the car we walked to the entrance and found this statue. 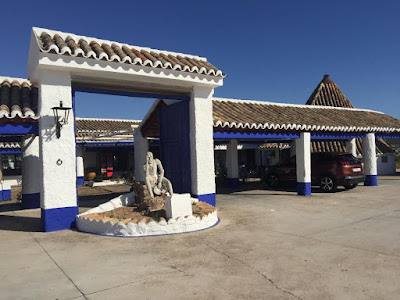 Is he Don Quixote? (After all we were still in La Mancha, I think) 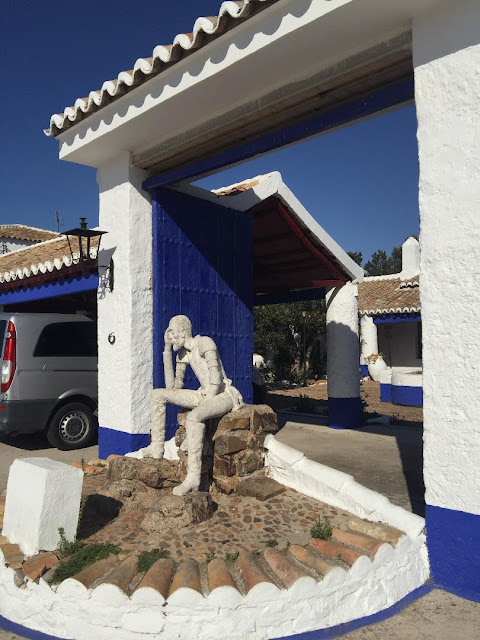 Into the courtyard with some water vessels, or they might have been for wine, who knows. We see them everywhere here in Spain, as people no longer use them so usually display them in the garden or courtyard. 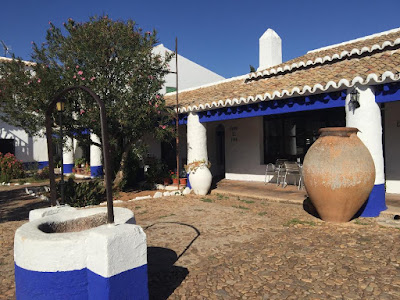 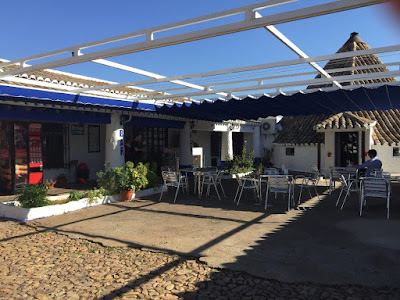 But we prefer an indoor dining room. The decor was olde worlde with antique furniture and ceramics. 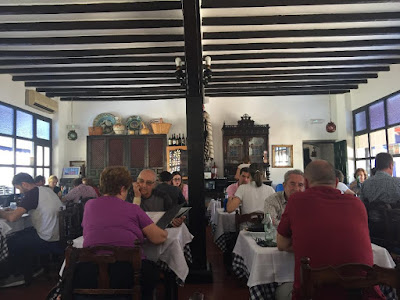 I went to wash my hands and when I walked back to our table the man with the red shirt recognised me (I didn't see him at all)  and came over to us. He is a man who helped us a lot when we first came to Spain in 2004. It was lovely to see him again. What a coincidence though, so far away from home.
Before we said goodbye, he took a picture of the two of us: 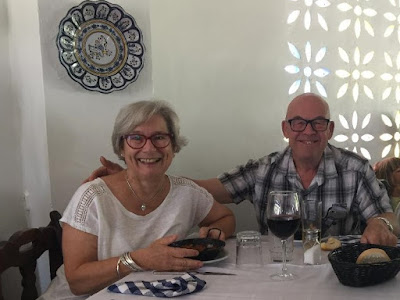 And here is my qualifier for the T-Party. I'm drinking red wine and hubby  a small lager. 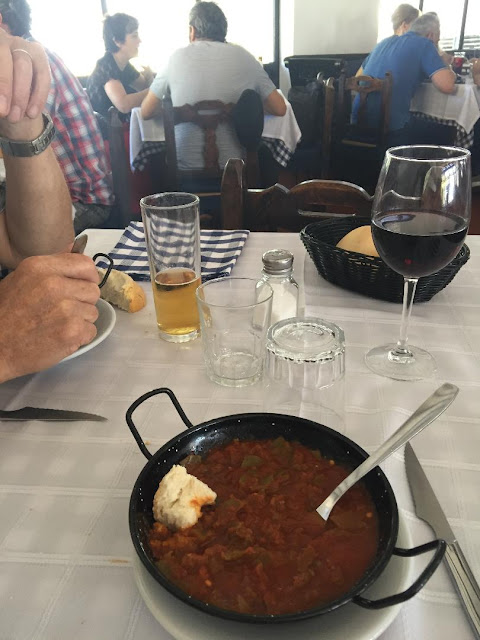 My first course was pisto. Hubby had something with vegetables. 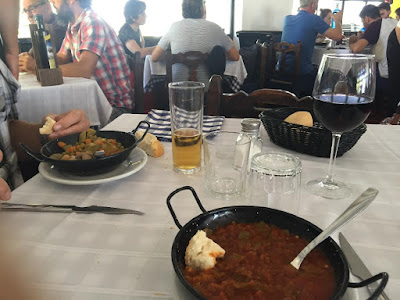 Hubs' main course. Again I forgot what it was, but he said it was lovely. 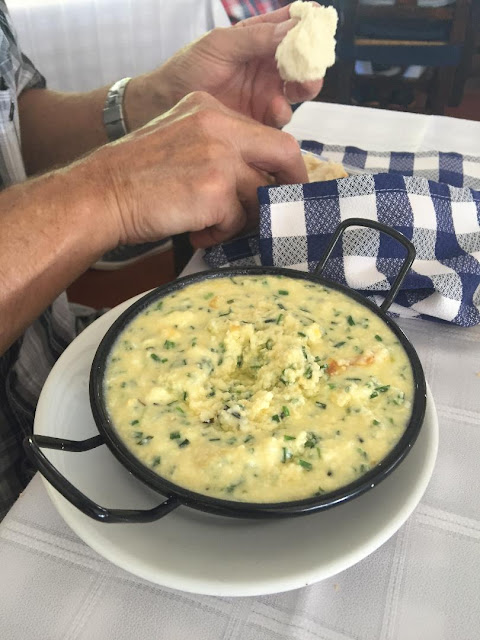 I hesitated showing you a picture of the rest rooms, but they were so beautiful that I just had to post these. 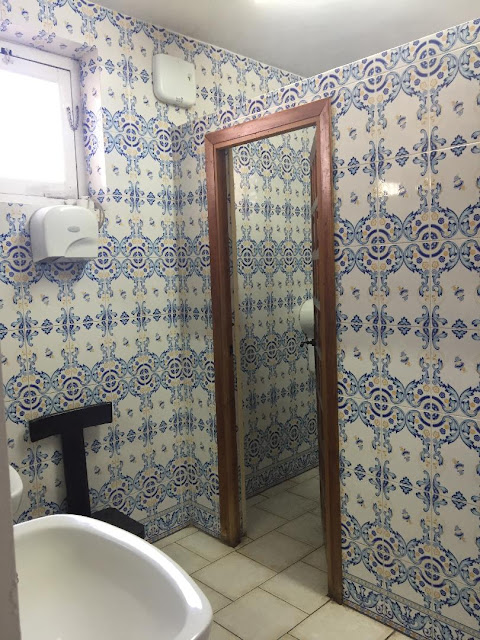 Lovely old looking doors and beautiful tiles, even in the cubicles. 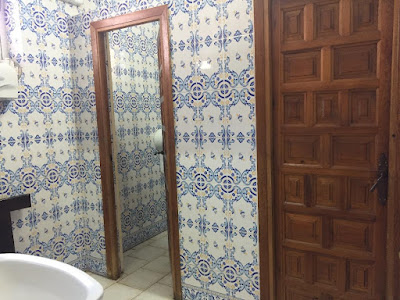 That is my lot for today. I am writing this on Monday evening, because my old friend from Holland is arriving later tonight and we will be catching up until the wee hours. We have known each other for more than 40 years. (we met at university). She and her partner are staying a while so I am quite excited about that.