Hello lovely ladies!
It's time for the T-Party again, organized by Elizabeth and Bleubeard. Come join us with a beverage of your choice.

First of all an apology to Elizabeth as I have forgotten to post something on the 2nd on the 2nd. My excuse is that I have had foreign visitors and it slipped my mind completely. Sorry.

I will show my beverage further down, but first my postcards.

I received this one from Australia, from Helen, whose father comes from Bristol (UK). She read in my profile that I had lived in Bristol for many years and she was very excited about that.
The card itself is a so-called Maxi card. It means it has a stamp with the same image as the card. This card is a jam label: 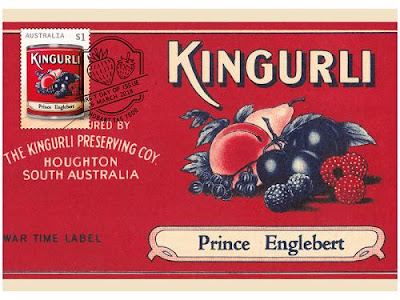 Over in South Australia, George McEwin (1815–1885), a gardener and orchardist in Houghton, South Australia, founded a jam factory with his son in 1862, in order to make use of excess fruit. At the height of their business, they employed more than 100 people and purchased much of the fruit in the region. Their jam was marketed under many brand names, including Glen Ewin, Viking and Kingurli, which was well known for its plum jam. (Prince Englebert is a large purple plum.)
The business went into decline in the late 1980s and the factory closed in 1988. The orchard site, however, is still used for fruit growing today.


The second card comes from Russia and was sent by someone from the Siberian city of Tobolsk. 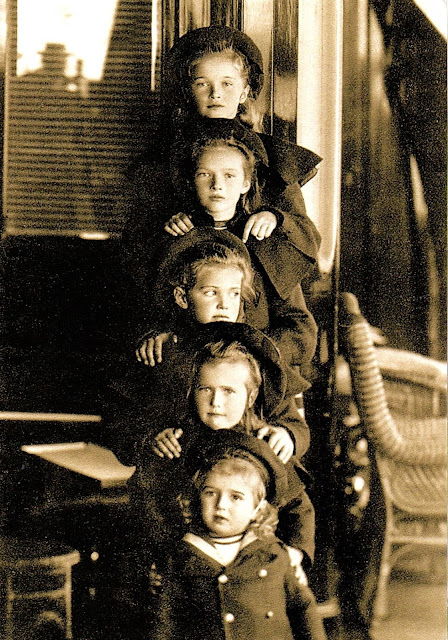 It features the children of Emperor Nicholas II: Grand Duchesses Olga, Tanyana, Marie, Anastasia and Tsarevich Alexis on the yacht Standart (in 1906).

The stamps on it are very beautiful: 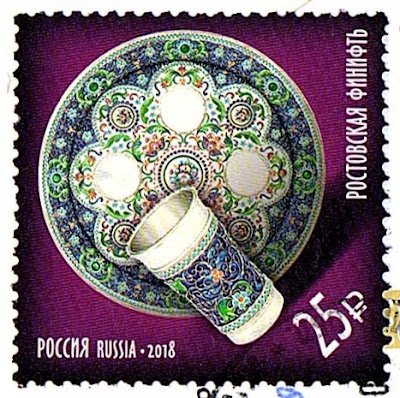 This is Russian artistic enameling. There is a whole series of these stamps: 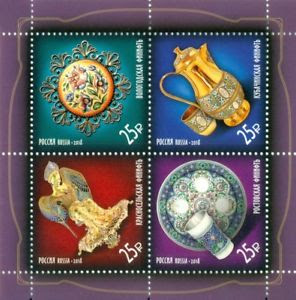 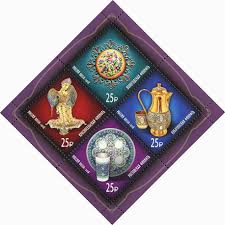 The second stamp on the card is this one: 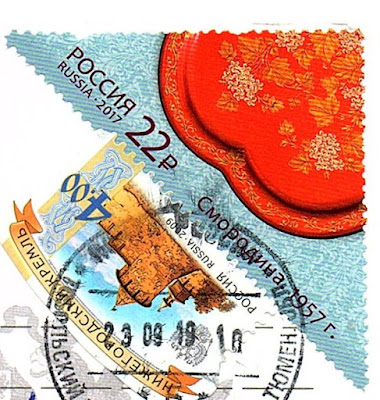 Again representing arts and crafts. This is the art of painting on metal, called Zhostovo painting. Four stamps together make a whole tray. 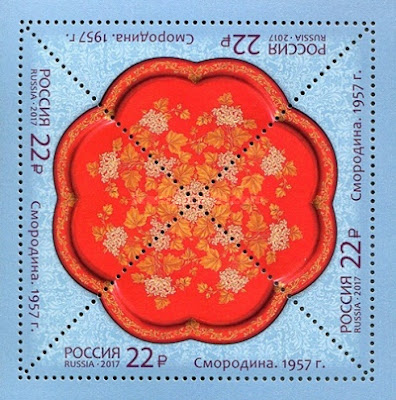 Wikipedia says this:
Zhostovo painting is an old Russian folk handicraft of painting on metal trays, which still exists in a village of Zhostovo in the Moscow Oblast. It appeared in the early 19th century mainly under the influence of the Ural handicraft of flower painting on metal. Subsequent development of the Zhostovo painting handicraft was stylistically related to porcelain and enamel painting techniques, used by factories near Moscow, flower motifs on printed cotton, produced by the Ivanovo factories, and Lukutin miniature (see Fedoskino miniature). 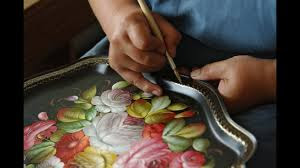 And what have I been up to? I have had my friend from Holland staying with me all week and it has been really nice. She has been my friend since 1971 when we both started uni.
We went to eat pizza at our local 'watering hole' and we were surprised at the size of the pizzas! 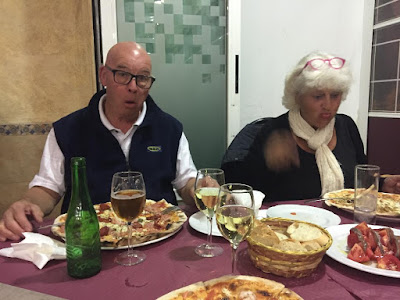 My T-Party qualifier are those glasses of wine (and one beer).
You might be able to tell by the plastic 'windows' that we are in the outdoor part of the bar. We had a dog with us. The owner allowed us in but we had to sit at the back on the outside part. Not a problem. 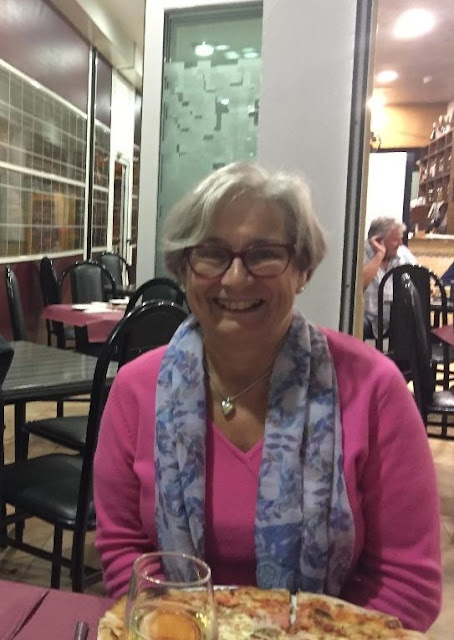 This was my pizza.(seafood) Needless to say, none of us finished the pizza and we took a box home full of pizza wedges to eat the next day. 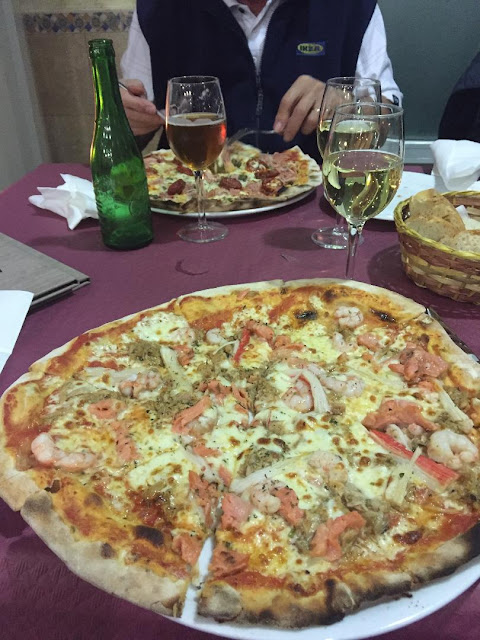 Hubby managed to leave space for a dessert: profiteroles! 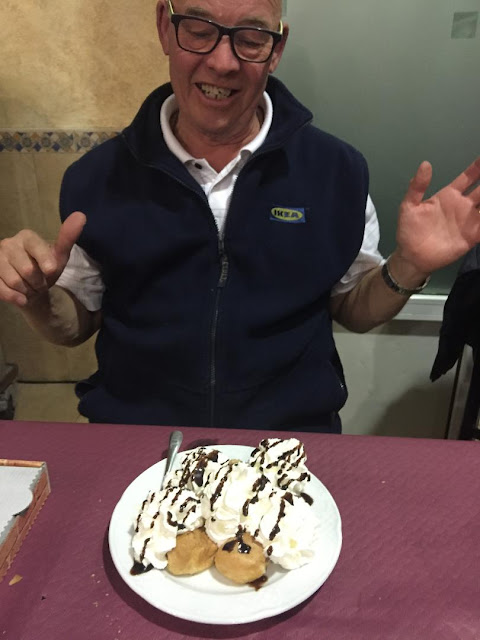 My friend's partner found space for a chocolate tart. 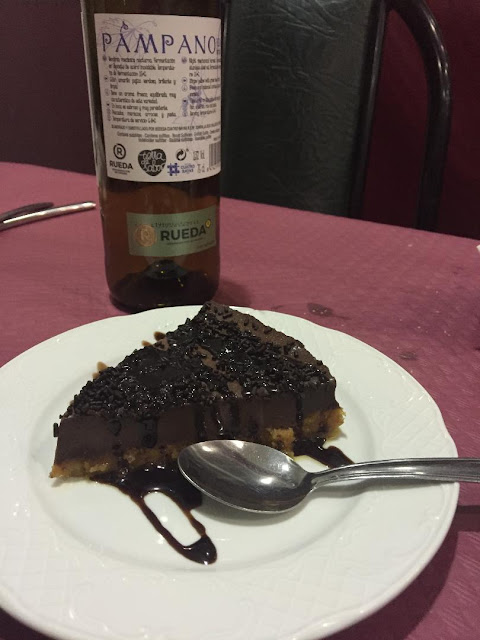 That is it from me today.
Wishing you all a very happy T-Day,
Hugs,
Lisca
Posted by Lisca at 00:05