Hello lovely girls,
Here we are again on Tuesday. Are you ready for the T-Party? Head to Elizabeth and Bluebeard's page with a blogpost that has a beverage in it and join the fun.
My blog is about postcards and our life in Spain, so lets start with the postcards:
I have a confession to make. I have been completely confused with the date (and consequently missed Second on the Second) and because I thought it was a day earlier, I also didn't realize we would be away tonight. So I'm writing this away from home. Not to worry, I have plenty of old postcards on my harddrive and photos from last weekend on my phone.

Here is a mapcard of the region we live in: Andalucia (southern Spain). The region is devided in provinces as it's quite big. The provinces are named after their capital cities.(Huelva, Sevilla, Cádiz, Córdoba, Jaén, Granada and Almería).  We live in the province of Granada 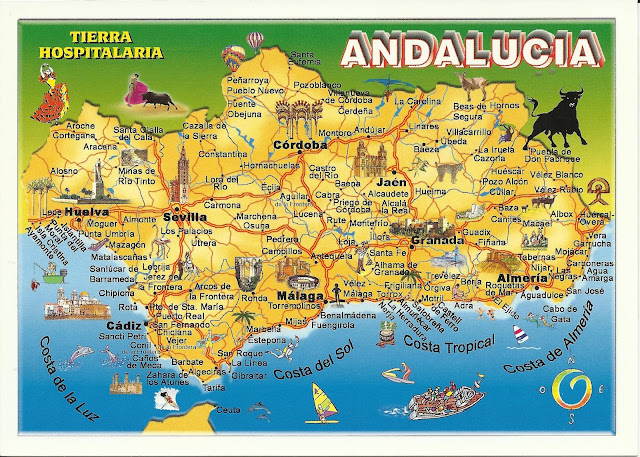 We live in the province of Granada. We live just to the left of the black bull. It's called Caniles and is underlined. At the moment we are in Gor, just a bit southwest of Caniles. (46 km away).
The sea at the bottom of both maps is the Mediterranean. 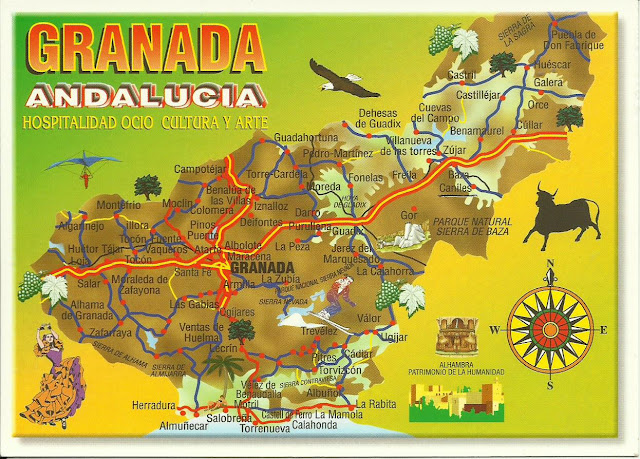 A bit to the south of Gor on the map, (over the little mountain) you see an image of a bunch of grapes. Above the bunch of grapes is La Calahorra, a  lonely castle that a nobleman of times gone by built for his beloved, but she never had the chance to live there. Sad... 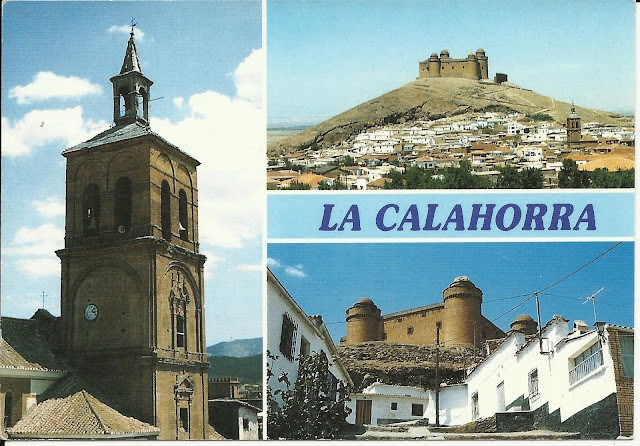 Enough sightseeing, let me lead  you (slowly)to my beverage.
On Sunday we had a social get-together with our language group. We call it Intercambio (exchange) and is meant for Spanish people who want to practice their English and English speakers who want to practice Spanish. We have a session every Saturday. One of the Spanish lads volunteered to cook the paella: 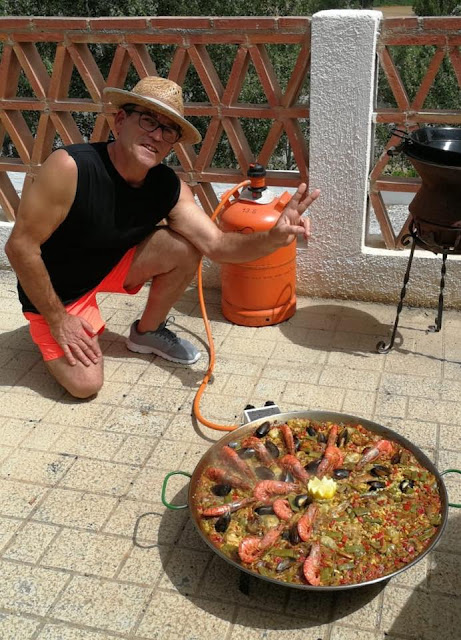 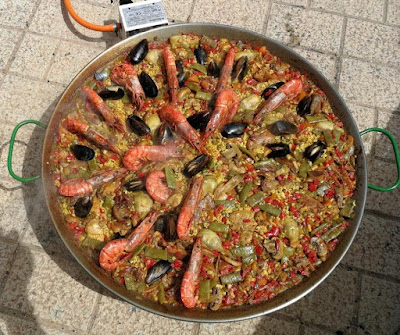 One quarter was left 'fish-less' as two of us didn't like sea food. 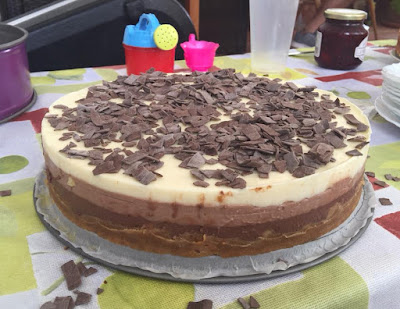 I made my (by now famous) Tarte a tres chocolates (=three chocolate tart), which went down well.

But there were other desserts. Here I am making up some plates with a little bit of everything. 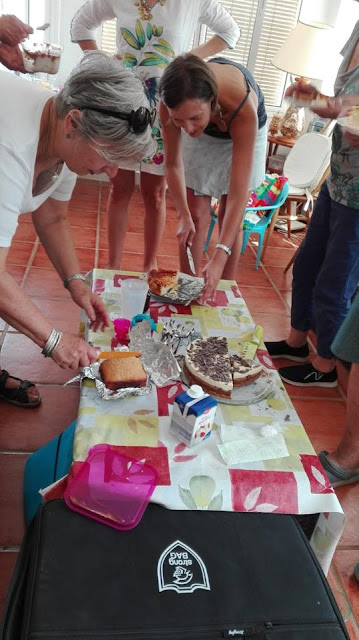 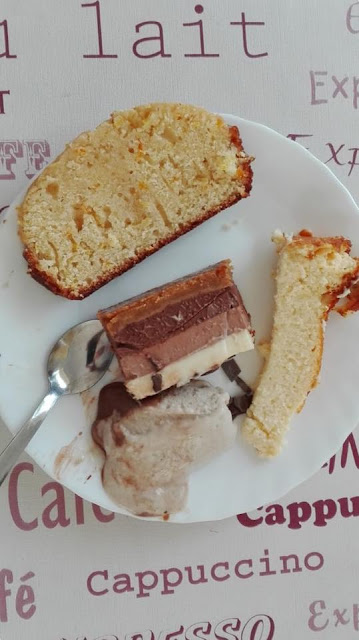 Here is the only photo with drinks in it. They are on the table and my drink is beside me (I'm on the left)

on the floor, red wine (in a plastic tumbler as we were in the pool house) 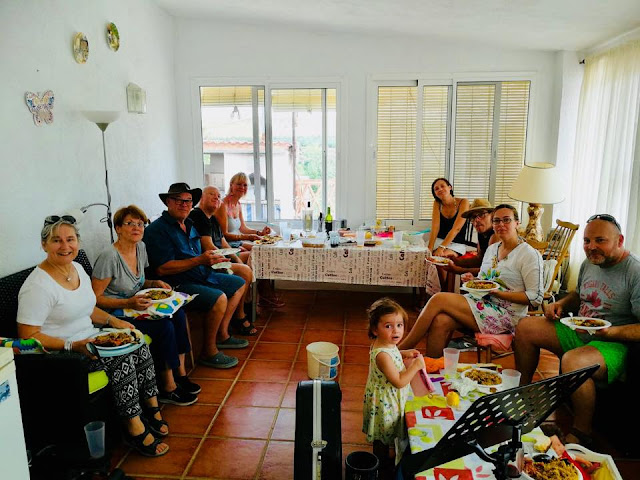 We made some music and sang some songs, trying to find songs that Spanish as well as English people knew 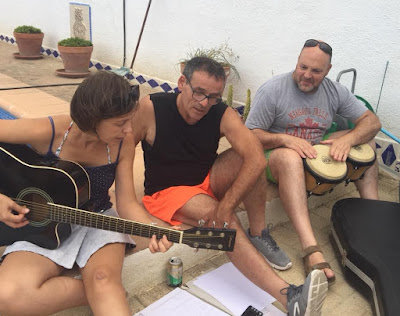 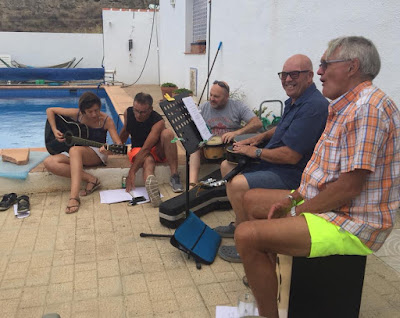 Hubby had made some song sheets and one of our friends is playing the cajon. 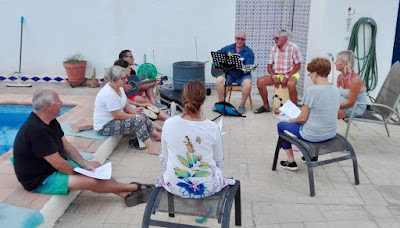 The best bit of the evening? The hot tub!! 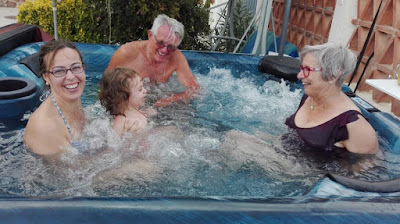 That's enough partying for a while. We will be travelling from monday morning onwards so I will do the best I can in my hotel room from my phone.