Hello lovely girls. It's Tuesday again! How that week flies!
It's time for the T-Party hosted by Elizabeth and Bluebeard. Please join us with a beverage of your choice. 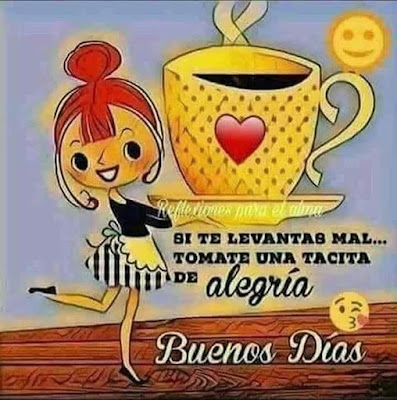 I would like to show you a postcard I received this week. It is a black and white photograph entitled: Neith with Tumbleweed, Paradise Cove 1986. It is by photographer Herb Ritts. 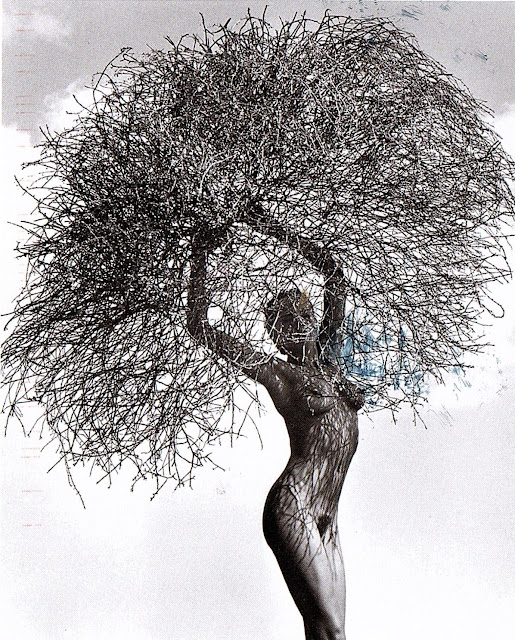 Wikipedia says: Herbert "Herb" Ritts Jr. (August 13, 1952 – December 26, 2002) was an American fashion photographer and director known for his photographs of celebrities, models, and other cultural figures throughout the 1980s and 1990s. His work concentrated on black and white photography and portraits, often in the style of classical Greek sculpture, which emphasized the human shape. 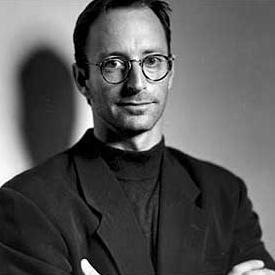 Born in Los Angeles, to a Jewish family,[2] Ritts began his career working in the family furniture business. His father, Herb Ritts Sr., was a businessman, while his mother, Shirley Ritts, was an interior designer. He moved to the East Coast to attend Bard College in New York, where he majored in economics and art history, graduating in 1975.[1]
Later, while living in Los Angeles, he became interested in photography when he and friend Richard Gere, then an aspiring actor, decided to shoot some photographs in front of an old jacked up Buick.[1] The picture gained Ritts some coverage and he began to be more serious about photography. He photographed Brooke Shields for the cover of the October 12, 1981 edition of Elle and he photographed Olivia Newton-John for her Physical album in 1981. Five years later he replicated that cover pose with Madonna for her 1986 release True Blue.
Ritts was openly gay.


The stamps are beautiful.

The large 'Forever' stamp is a Post Office mural.

“Kiowas Moving Camp” (1936)Anadarko, Oklahoma
One of the Kiowa Six, a group of 20th-century Native-American artists hailing from Oklahoma, Stephen Mopope (1899–1974) designed a multi-part mural depicting Plains Indian life. Mopope and Kiowa Six artists James Auchiah (1906–1974) and Spencer Asah (ca. 1906–1954) painted 16 murals with tempera paint directly to the plaster walls in the lobby, including “Kiowas Moving Camp.” They can be seen at the Anadarko Post Office in Oklahoma.
Anadarko got its name when its post office was established in 1873. The designation came from the Nadarko Native Americans, a branch of the Caddo, and the "A" was added by clerical error.[7]
In 1871, the Wichita Agency was reestablished on the north bank of the Washita River after being destroyed in the American Civil War. The Wichita Agency administered the affairs of the Wichita, Caddo and other tribes. In 1878, the Kiowa-Comanche Agency at Fort Sill was consolidated with the Wichita Agency. 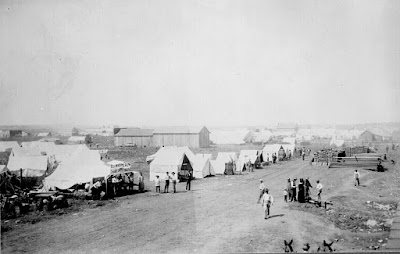 In 1901, the federal government allotted the lands of the Kiowa, Comanche and Arapaho Reservations, and opened the surplus land to white settlement. On August 6, 1901, an auction was held for homesteads and town lots. Around 5,000 people were living in "Rag Town" on the east edge of Anadarko awaiting the auction. Although 20,000 people were present for auction day, Anadarko's population dwindled to 2,190 in 1907.[7]
Agriculture has been the principal driver of the local economy, since the Washita Valley has been good for crops and livestock. The second pillar of the local economy has been Native American affairs.

I'm sure Elizabeth knows all about this, but for me as a European this is all very interesting and I hope that others have found it interesting too.
Now a bit more about me (us). Last week we went to our weekend home to check it out and do some cleaning.

Hubby focused on the outside and I cleaned the kitchen, including this old thing: 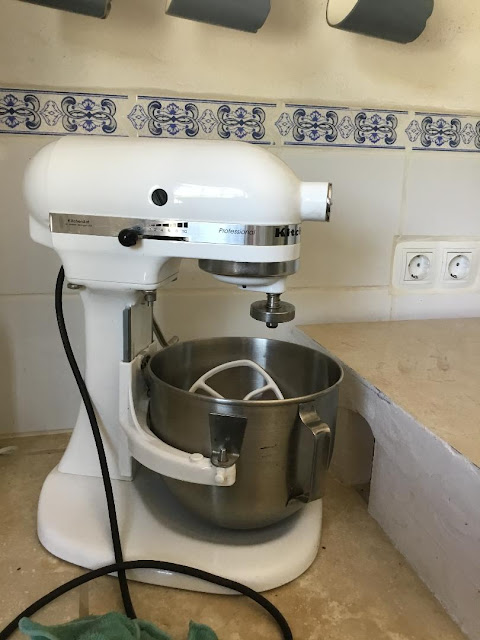 It's my old Kitchen Aid. The 'head' is fixed and that makes it awkward to get the paddle out. But it is a splendid machine and still works a treat. 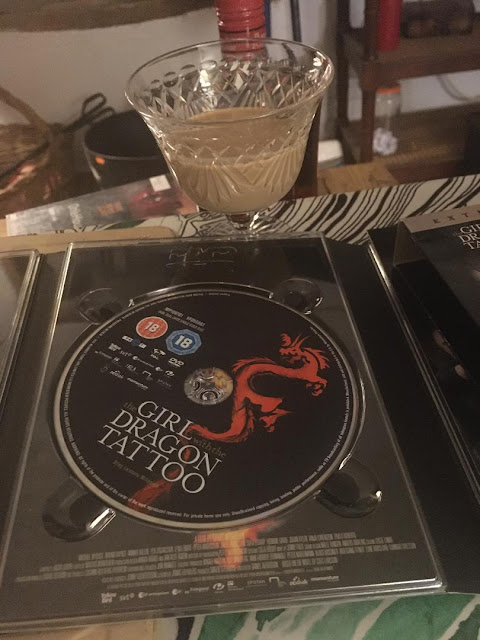 In the evening we watched a DVD and had a glass of Baileys.
The next day we went to our favorite restaurant, which has re-opened, to have a meal: 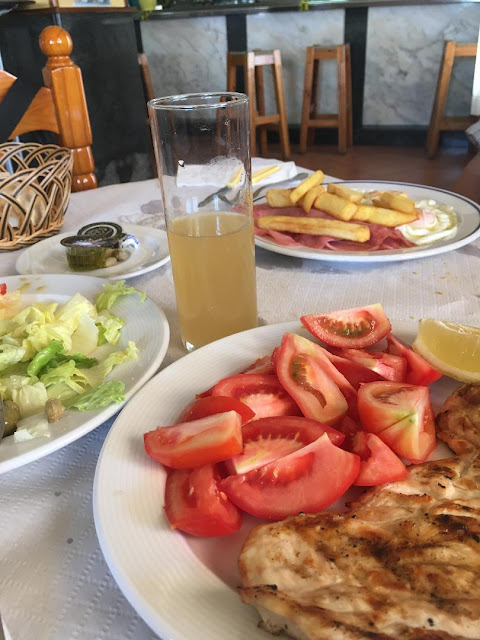 I had a char grilled chicken breast and hubby had his ham, egg and chips (not on the menu but made especially for him). My drink is a Radler (beer with lemon). 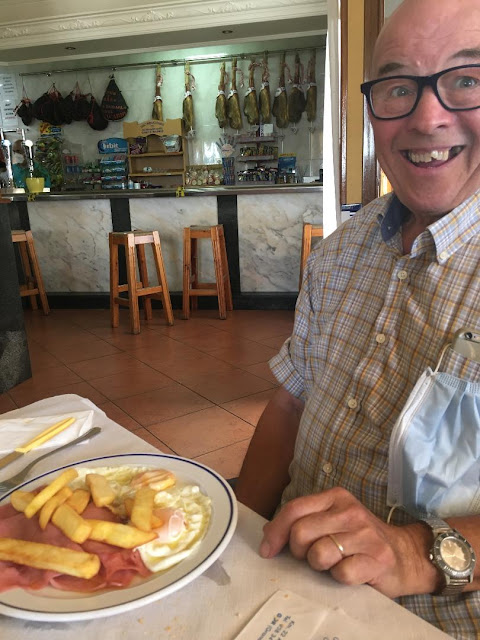 After our meal we drove to the nearby Negratín reservoir, to see what the water level was. 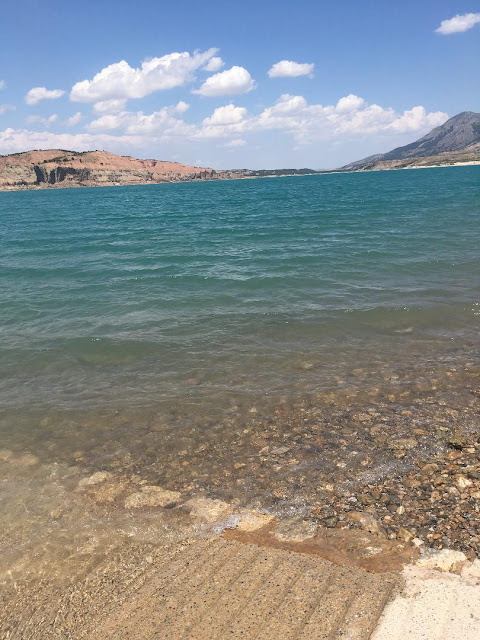 It was just below normal (the white bit). 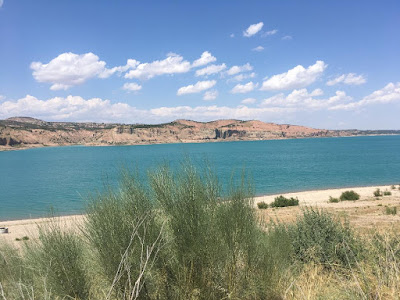 The colour of the lake is actually turquoise and it's very beautiful. 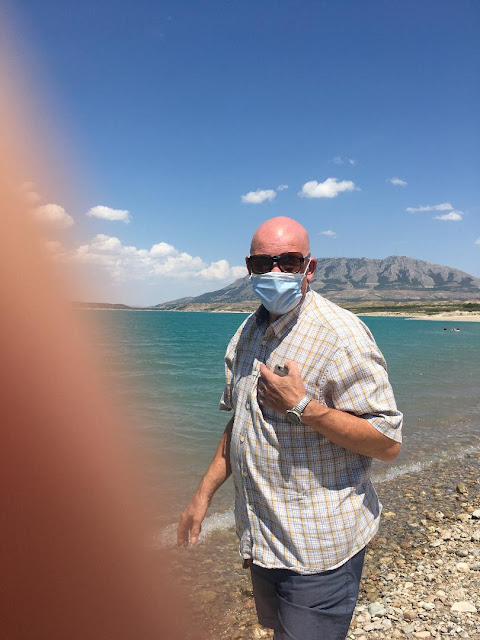 Sorry, my finger got in the way.
The hill behind hubby is called Jabalcon. My header photo was taken from the top of Jabalcon by a friend called Edu. 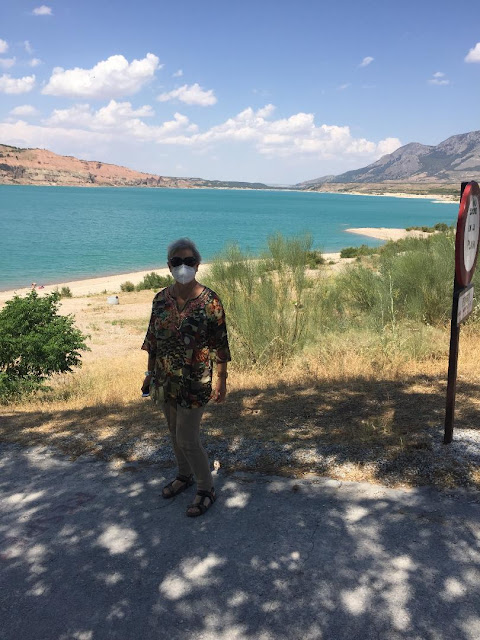 Yes, we have to wear masks even there.

Lastly, when we were home again, it was time to open our first kombucha bottle. I asked hubby to carefully open it, in case it would explode everywhere. (Excuse naked upper body. It was very hot ) 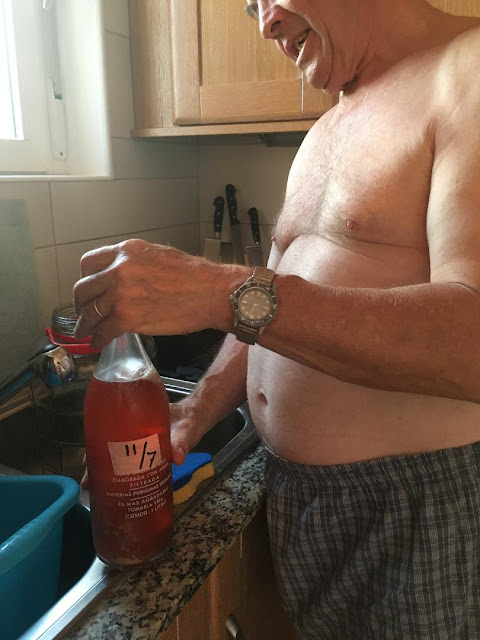 I had done a second fermentation with raspberries. (I had tried nine different fruits and flavorings, but raspberry is our favorite). 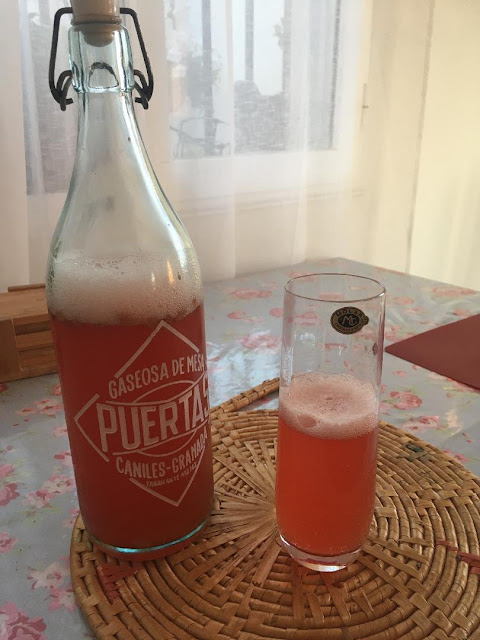 And it was absolutely delicious!!

That is it from me today. I wish everyone a very happy T-Day!
Lisca