Hello lovely ladies,
Ready for the T-Party? Come and join Elizabeth and Bleubeard, our hosts, with a beverage. I'm having a coffee: 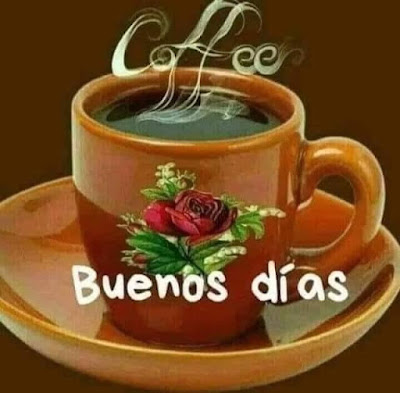 It should have been champagne as we are celebrating 7 years T for Tuesday! Thank you so much Elizabeth for hosting this wonderful T-fest!

I have received a few postcards again. This one is from the Netherlands. It is the light house at Marken. The name of the lighthouse is (translated) The Horse Of Marken. 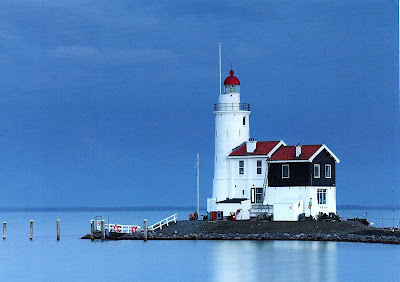 Wikipedia says: The Paard van Marken (English: Horse of Marken) is a lighthouse on the Dutch peninsula Marken, on the IJsselmeer. It was built in 1839 by J. Valk. A primitive lighthouse had been on the location since the early 18th century; the current lighthouse has been a listed building (Rijksmonument) since 1970. 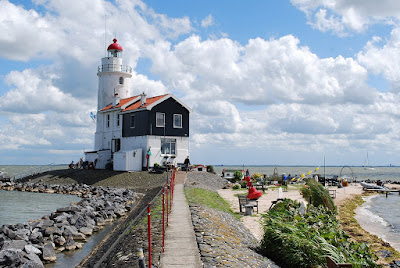 Here is a map to give you an idea where Marken is: 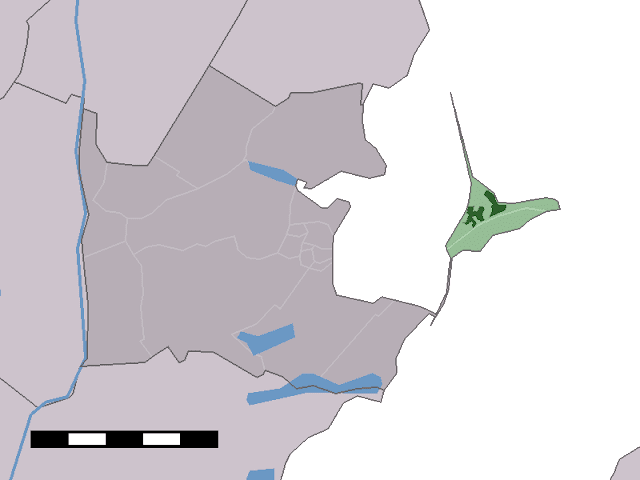 The place used to be an island but it was linked to the mainland by a fixed dike. Since the Middle Ages, Marken has lost about a third of its total area. In the eastern part of the island, underwater, there are still remains of a medieval cloister that was razed by the waves.
The Marken houses are built on artificial mounds raised largely during the 15th century. This type of construction allowed the inhabitants to be safe from frequent floods. When most of the island's rugged terrain was occupied by houses, construction began on wooden stilt houses, a move that allowed water to pass under the houses without causing problems. When the fixed dike was built and the water was drained, the wooden stilt houses were no longer useful, so they were gradually abandoned. 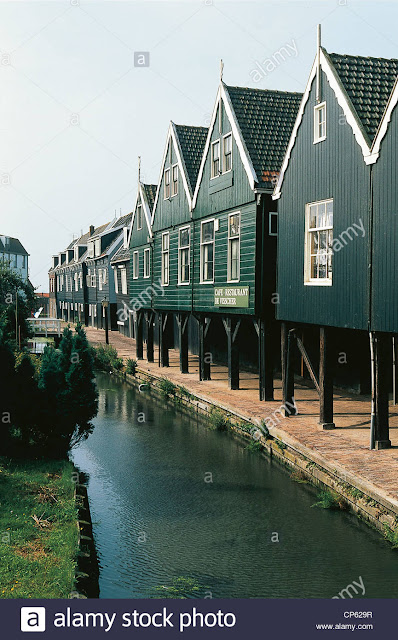 Marken is still an agglomeration of typical wooden houses. The island, converted into a peninsula in 1957, is considered part of the national heritage and has official protection. Marken is a renowned tourist center, famous for its already mentioned wooden houses and for the use of the typical Dutch costume. 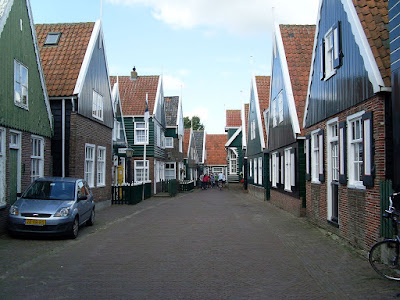 None of the photos are mine. I have snaffled them all from the Internet. Also the info is from Wikipedia.

The stamp on the card is really nice. It features the Flying Scotsman train. 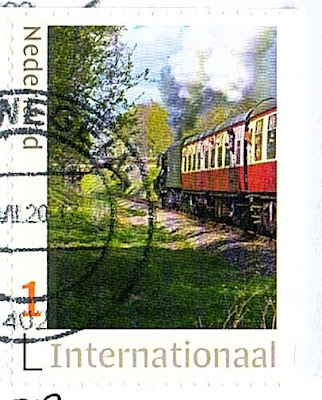 This (steam) train ran from London in England to Edinburgh in Scotland. In total 534 km. 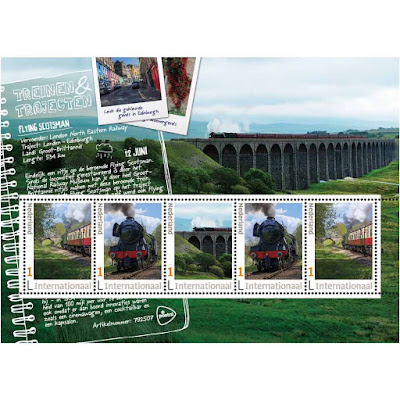 So, what has been happening here? It has been very hot and dry. The bush fires have started again, and there were a few small ones quite close to here. 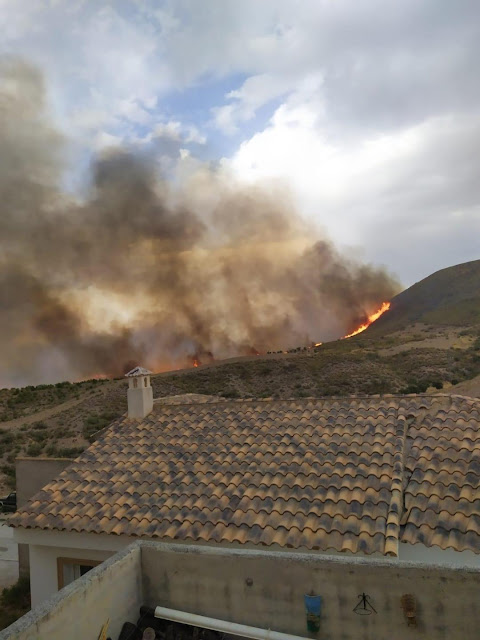 I did not take these pictures, but some friends of mine did. The helicopter is lifting water out of the local lake (Reservoir), to drop onto the fire. 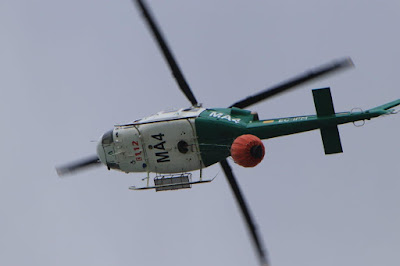 I still go walking with my friend twice a week. Here are some photos from last week's walks.
The iron Bridge is just outside the village. There used to be a railway line, which was discontinued in the sixties. But this old bridge is still there. I took this picture: 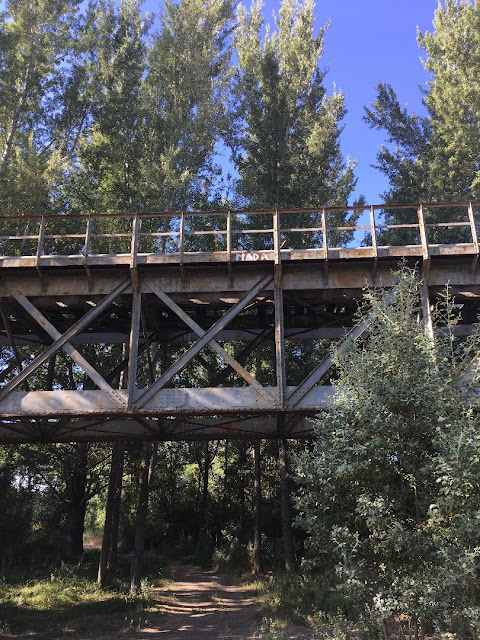 On December 16, 1894 the Baza, Caniles and Hijate stations were open to rail traffic. This 135 km section belonged to the projected line from Granada to Lorca, and built by The Great Southern of Spain Railway Company Limited. Along the route there were bridges such as the well-known Iron Bridge or Lata de Caniles, a unique work of engineering and application of new materials, now abandoned. 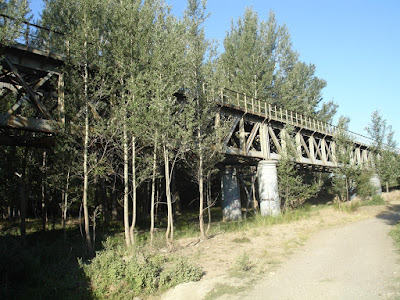 Apparently it was designed by the studio of Gustav Eiffel.
The track where the railway used to be is now a walking path called the Greenway. (Via Verde). The factory you can just about see in the distance, is the old sugar factory (now disused). The train line was important for the factory in its hayday. When the importation of sugar cane from Cuba was no longer possible, the sugar factories had to close. 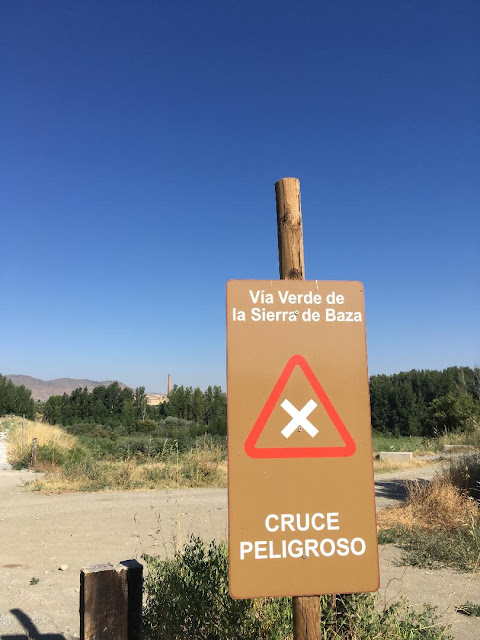 In the photo below, we are on our way back to Caniles. You can see the village in the distance. 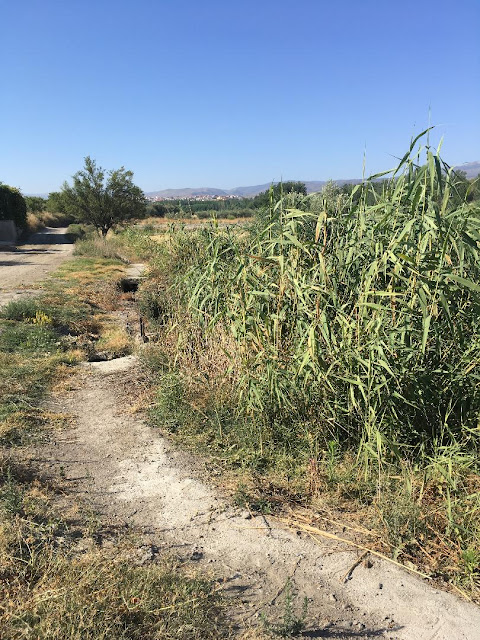 We passed the sheep farm on the way back. 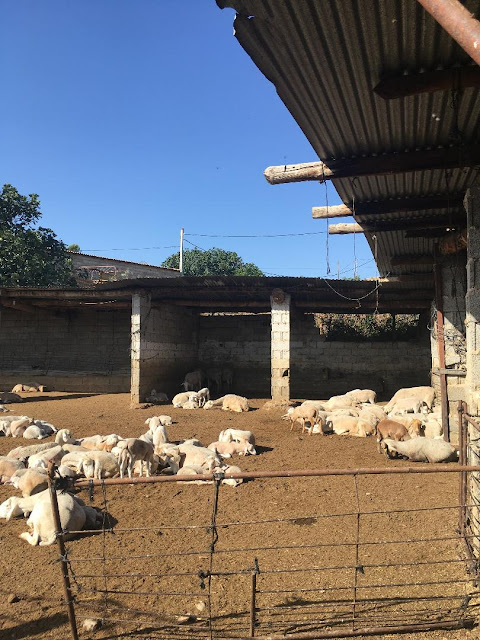 And we saw some interesting flowers. I have no idea what this is... 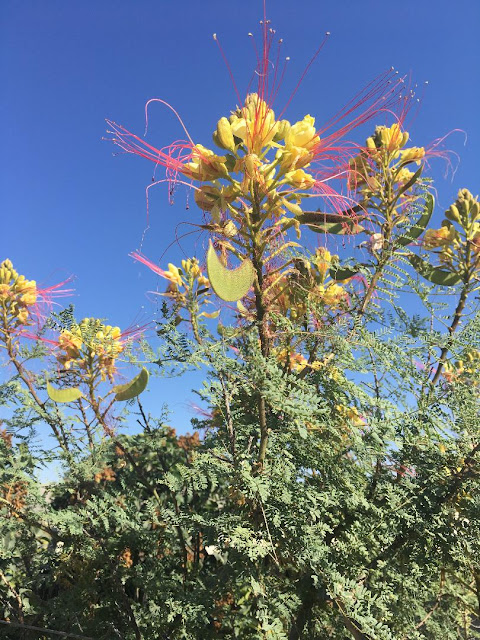 You can tell by the angle that the bush/tree was taller than me. It has some interesting pods.

Yesterday hubby had to go to the optician and we also needed to do our weekly shop in town. We eat our main meal in the day, but I didn't feel like cooking, so we went out for lunch. My first course was gazpacho, a cold soup typical of this region. 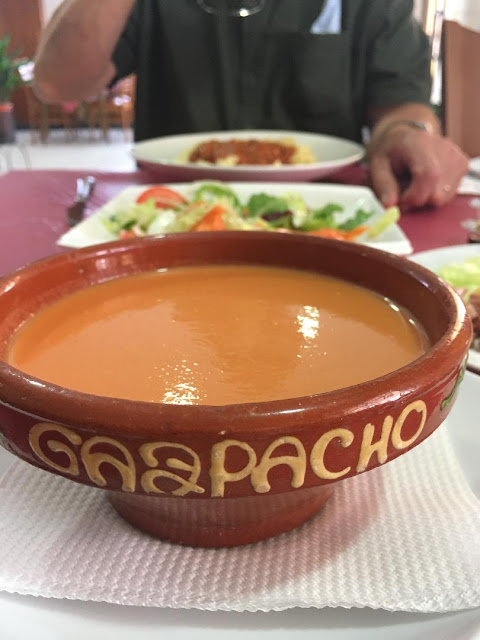 Then I had pork fillet char grilled with chips. Very simple but tasty. Our drinks were Radler (lager beer with lemon juice). 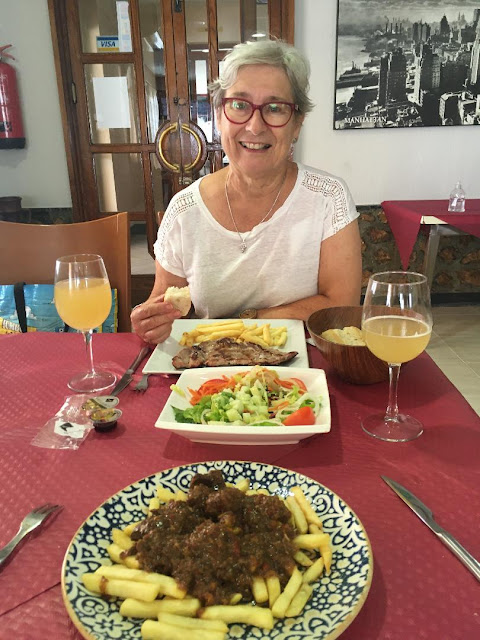 We were wearing masks (now compulsory here), but thankfully we are allowed to take them off while eating!

That's it from me today.
Happy T-Day to all,
Blessings,
Lisca

PS, I have not added my asterix this time, as I still have not made my ATC (although I planned to do one). Elizabeth asked to have one ready and I have had plenty of warning. It somehow never happened, so I'm sorry, No ATC from me....