Hello lovely ladies, how are you all? We are plodding on in the relatively safe little village in rural Spain. Supermarket supplies are in a mess because of the extreme weather in other parts of Spain and the mail is down to a trickle compared to my regular flow of postcards. But I did receive a few last week and this is one of them: 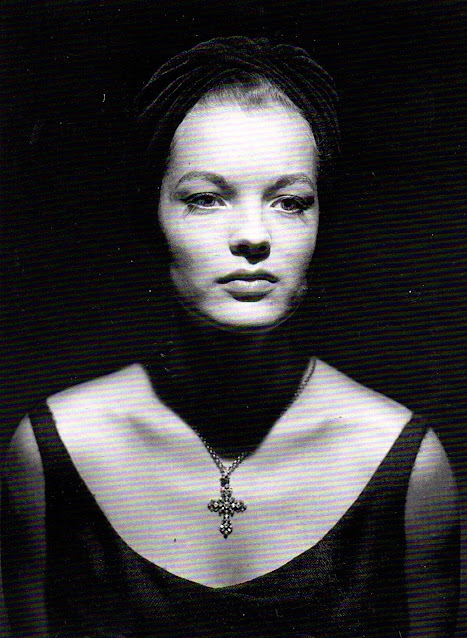 I recognized her immediately as being Romy Schneider, a German actress, famous in the 60s. She was born in Austria to German/French parents. Romy is short for Rose Marie and Schneider was her mother's surname. She became well known for her role as empress Elizabeth in the Sissi films. The love of her life was Alain Delon, who she never actually married. He broke off their relationship after 5 years together. She suffered quite a few tragedies. She married more than once and with her husband Harry Meyden she had a son. Harry committed suicide after they divorced and two years later, her 14 year old son David was killed one Sunday when he climbed to the top of a wrought-iron gate and slipped, fell and was impaled on the spikes of a fence below. Months later Romy herself was found dead in her apartment. She and her son David were buried together. 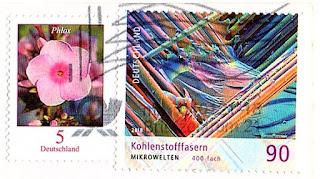 The stamps are beautiful. The one on the right says: Kohlenstofffasern, which means carbon fibres. It comes from a series called Micro worlds. The photos are made by prof Manfred Kage with a very strong microscope (electron microscope). The image above has an amplification of 400.
Here are some more examples: 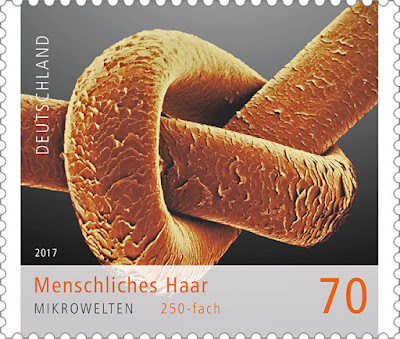 The human hair, with an amplification of 250. 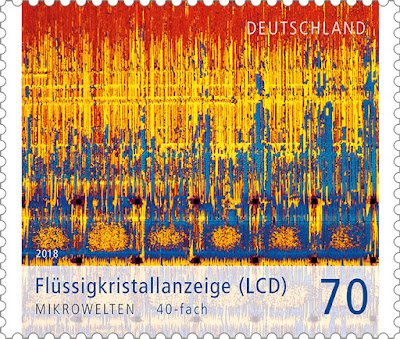 Then there is 'Liquid crystal display', which is 40 times amplified.
I find all that fascinating. I wish I could look through an electron microscope. I don't think they had those when I went to uni.
Enough of that. What have I been up to? The current situation dictates that we stay home as much as possible.
This is our home: 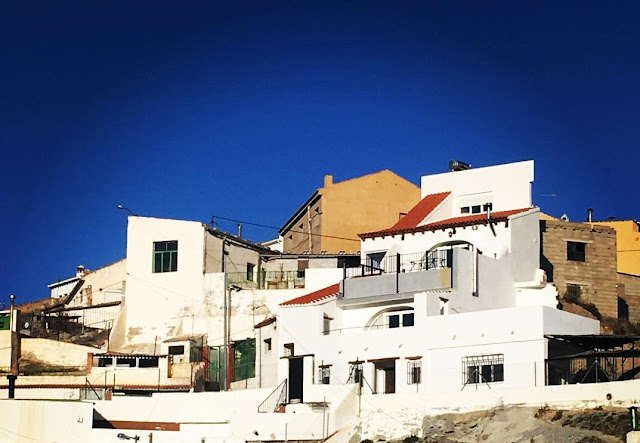 The green gate towards the left is the entrance to the old cave house which hubby is restoring. You can't see much of the cave house, but you can see the garage on top of it (with a green window) plus a sizeable terrace. The whole left part of the photo is old. The four storey building on the right is the house we live in. The top floor is the bed room, under there (with the arched window) is our living room/kitchen, where I am now and where you saw my hubby sit the other day. 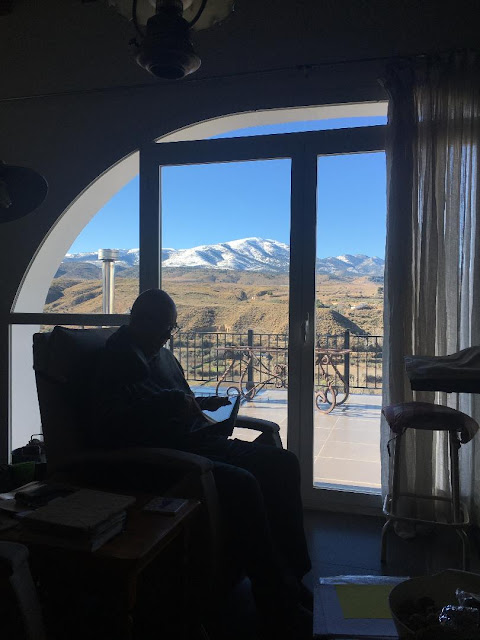 Under there (again with an arched window) is my craft room with a large terrace, and down stairs there is an apartment where we live in the summer. There is a car port downstairs, and there is one upstairs (not visible). There is a street entrance upstairs, level with the yellowish building in the photo. This photo was taken on Sunday. As you can see the weather is lovely and I make sure I get some fresh air every day.
On Sunday I walked with my hubby to our plot. With the excuse that we had to empty our kitchen scraps onto the compost heap. 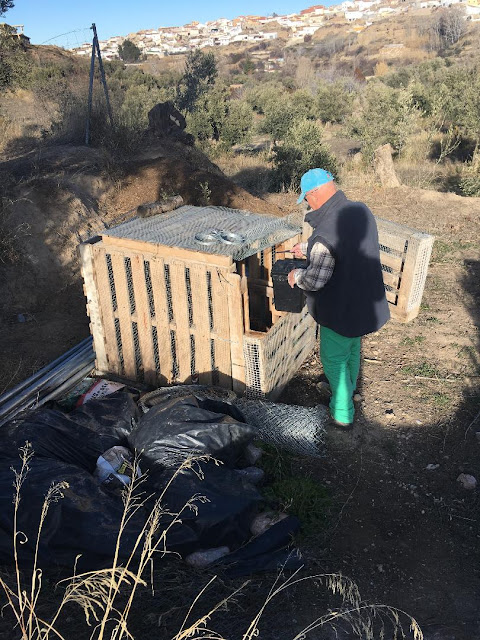 Our house is exactly behind my head (In the distance). 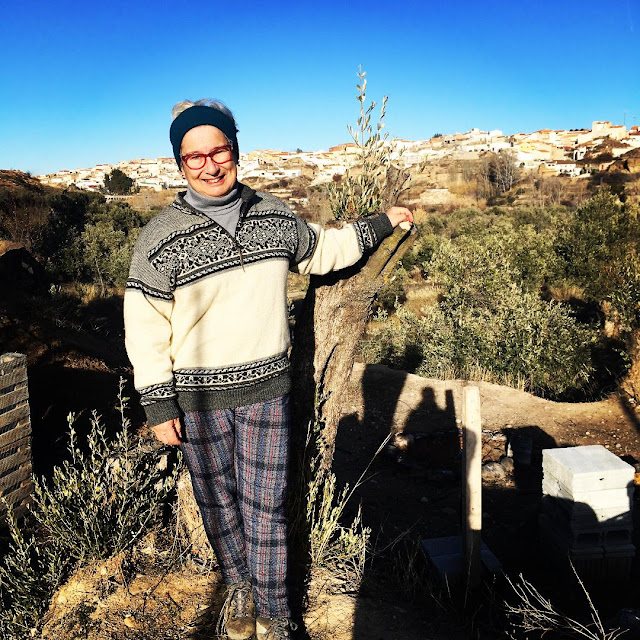 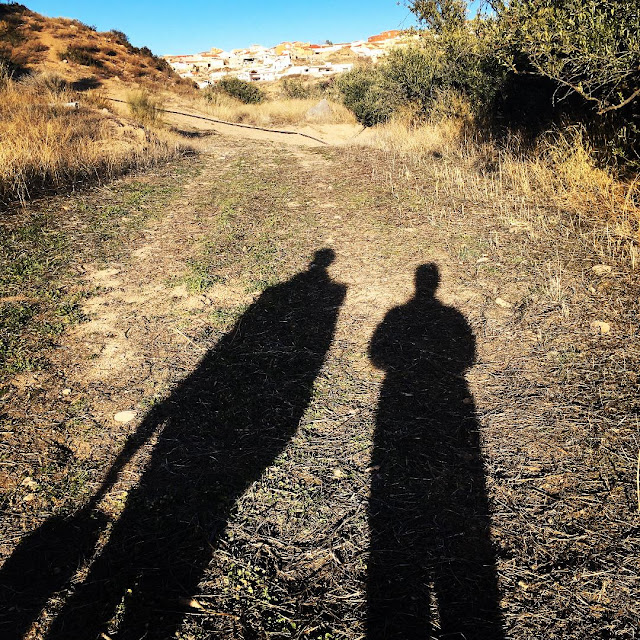 Guess what I saw? Lots of little flowers! Aren't they cute? 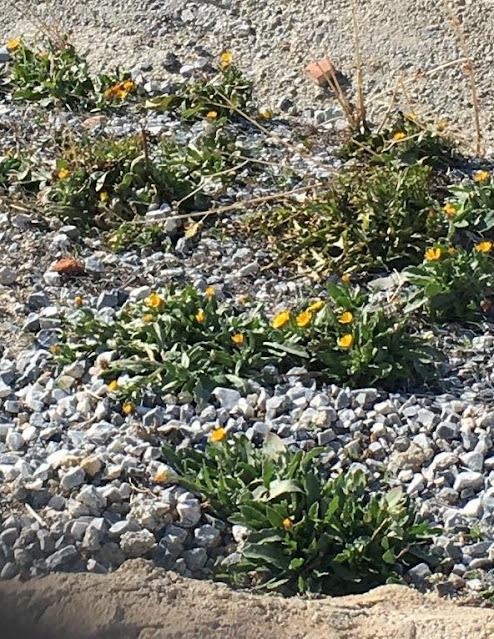 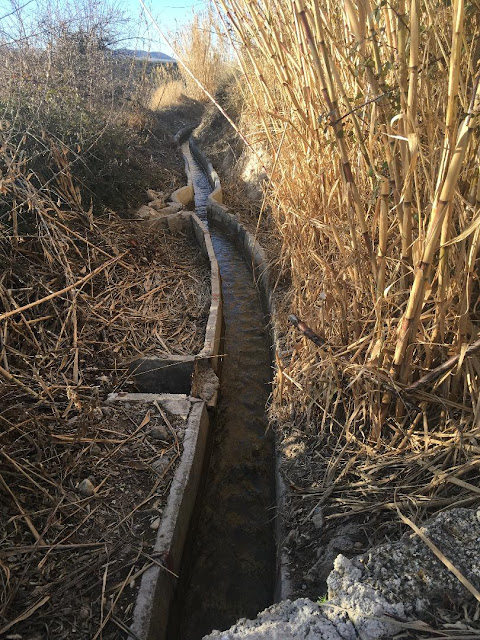 This morning (Monday), hubby had to go to the doctor's to have his bloods done. He was nil by mouth for that, so as soon as we were done, we stopped at a local bar to have breakfast: 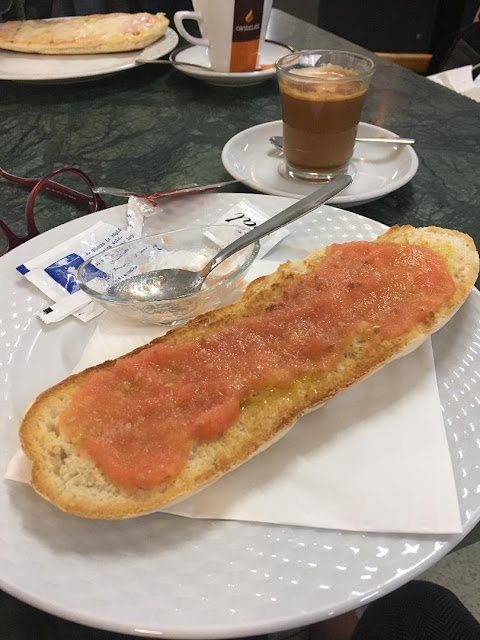 Of course we also had freshly squeezed orange juice. (as well as coffee). This is also my ticket to the T-Party. Elizabeth and Bleubeard host this online get-together where all you need is a beverage to join in the fun. 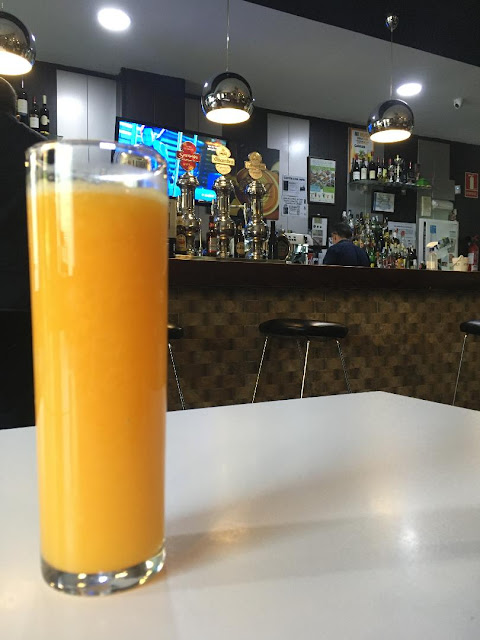 We are no longer allowed to stand at the bar (as most people do when they pop in for a coffee or a drink), so they put bar small tables by the bar, and people sit at the little tables. Crafty! 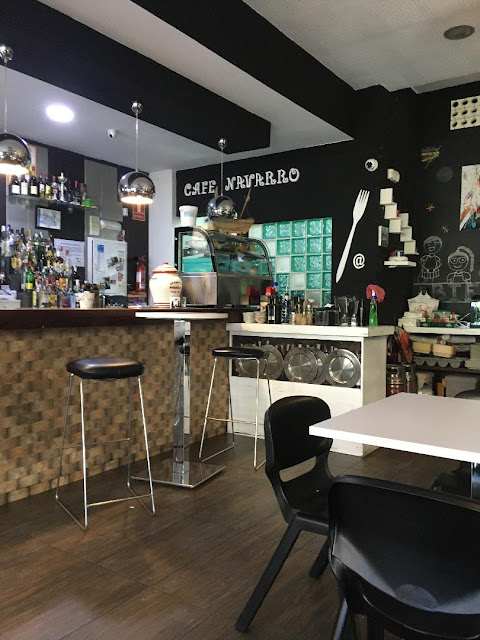 There was a guy sat at the particular table and I had to wait until he had gone so that I could take the photo.
The highlight this week was Friday, when we were invited to have supper with our Mexican friends. She had prepared a lovely table for us: 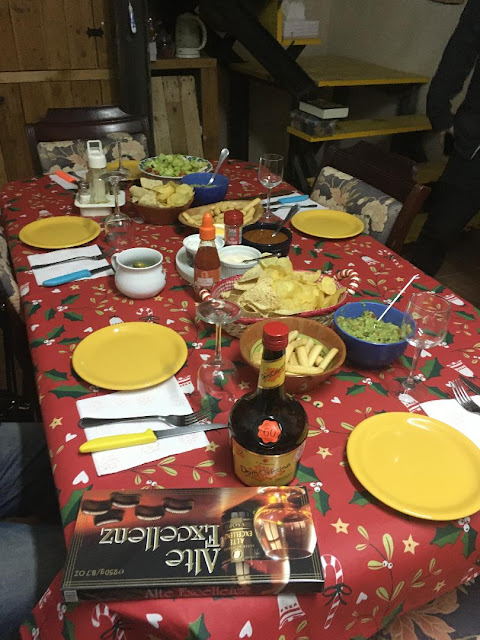 I brought a bottle of liquor (another beverage for the T-Party). My friend prepared (among other things) this 'roscon' (circular bread) filled with ham and cheese. 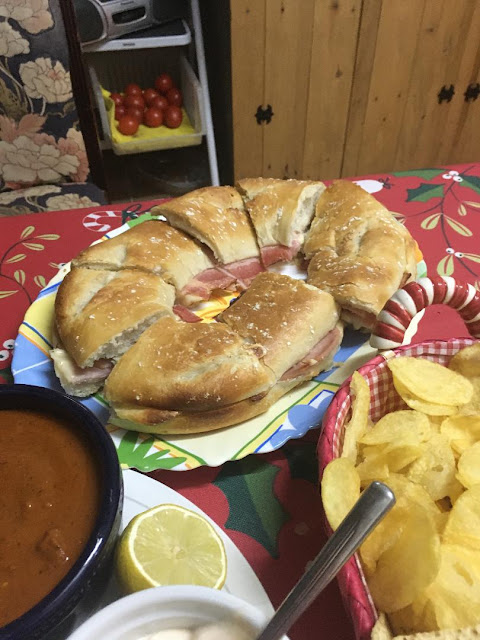 I had made a layered cake 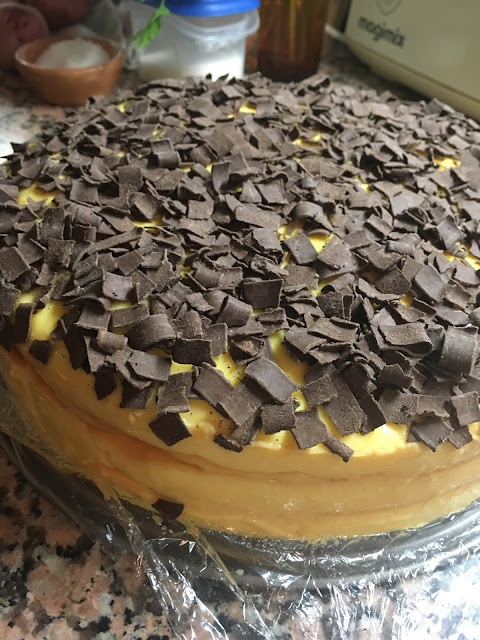 Layers of sponge with pastry cream in between the layers. 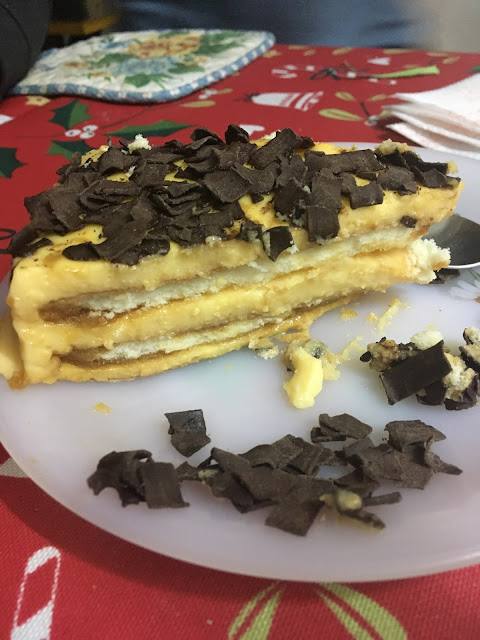 And chocolate flakes on top. Very yummy.
Last but not least, I want to show you a sunset from the other evening. Valerie does sunrises but I only see the sunset. 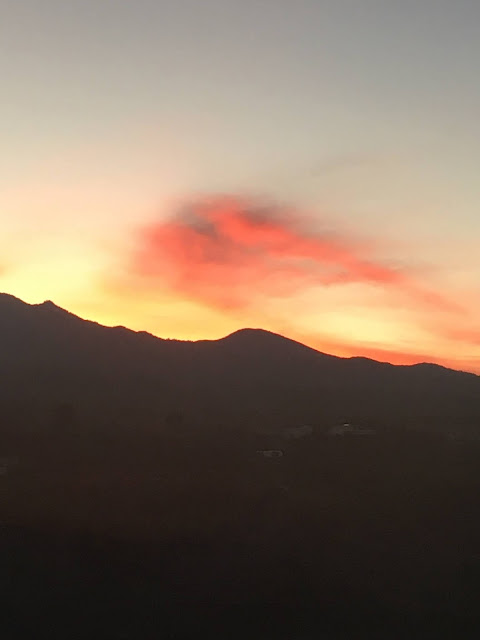 I'll leave you with something I found on the internet: 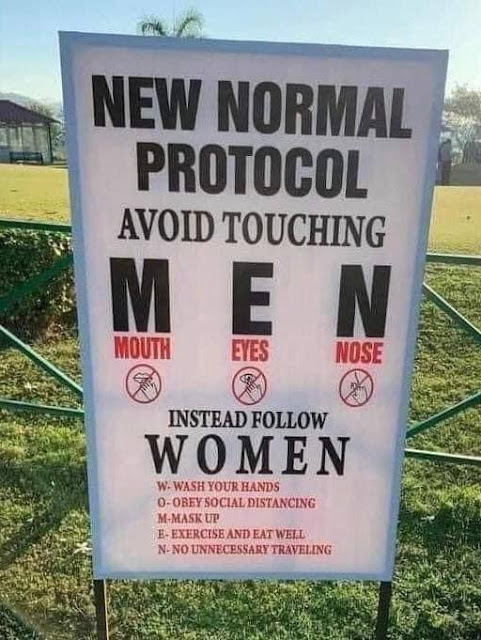 That is it from me my lovelies.
Happy T-Day to all,
Stay safe and stay healthy.
Hugs,
Lisca 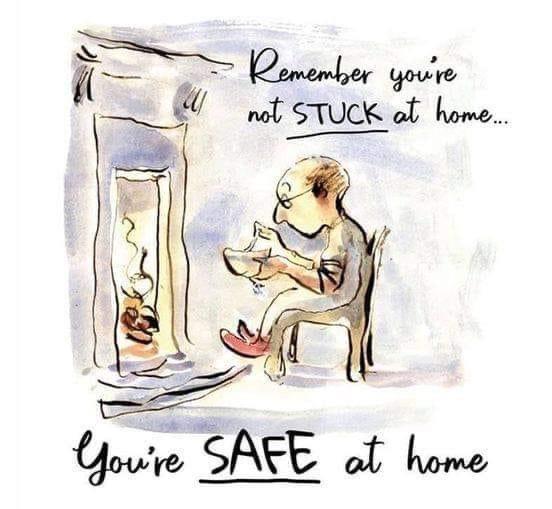 Edit: Kathy asked if the flowers were dandelions. I think not. Here is another photo, but a bit closer: 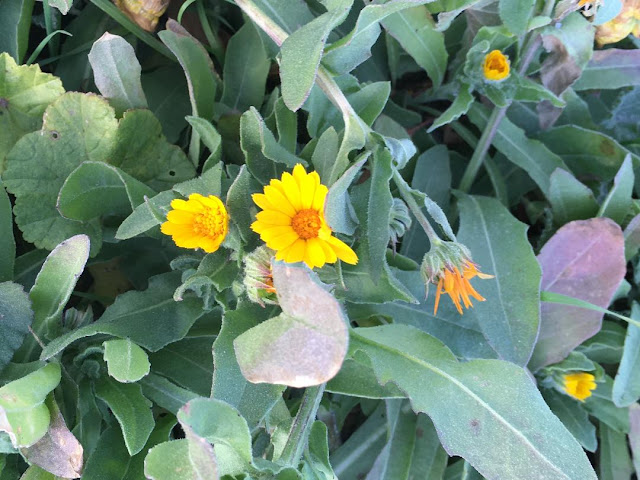